Situated just off of the main road in Erina sits a hidden little creative gem that is home to some of the best coffee on the Central Coast alongside a creative hub delivering some of the most unique jewellery pieces.

The two brands, Studio Lane and Fifth Lane are brought to you by the infectiously friendly and creative mastermind, Tommy Lane. We dropped by to chat about all things creative, coffee, and Central Coast. Read on to hear everything about Tommy Lane’s background, how the two distinct businesses came to be, and what makes the Central Coast home for him. 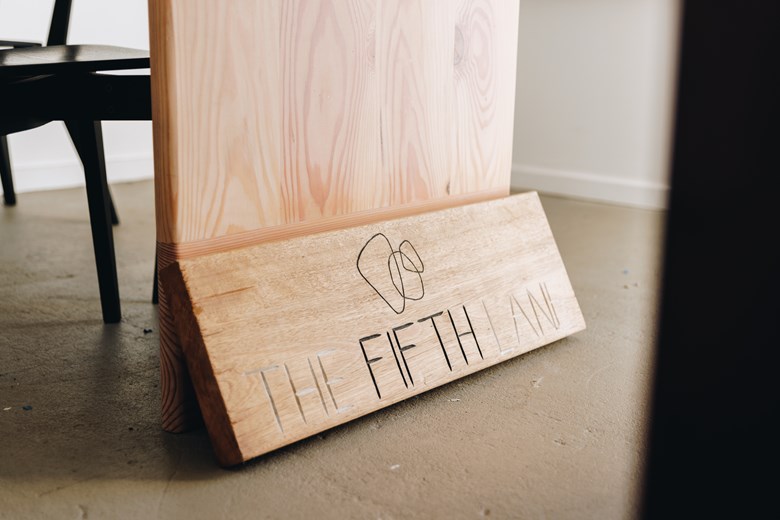 Thanks for taking the time to chat with us today, Tommy, we can’t wait to hear all about your two creative babies, Fifth Lane and Studio Lane.

Are you originally from the Central Coast? If not, what brought you to the area?

“I’m from the Northern Beaches in Sydney. I grew up there and travelled a lot with my family over the years. I had a coffee shop in Sydney which was a great little community spot. We sold that two and a half years ago. Amy, who is the mother of my children, is originally from the Central Coast so we sold that and decided to move up here.

“I kept coming to the coast to escape Sydney and all of her family is here. So, we decided to pack up and move here. It was the best decision we ever made. The beaches and the people; it’s just epic.” 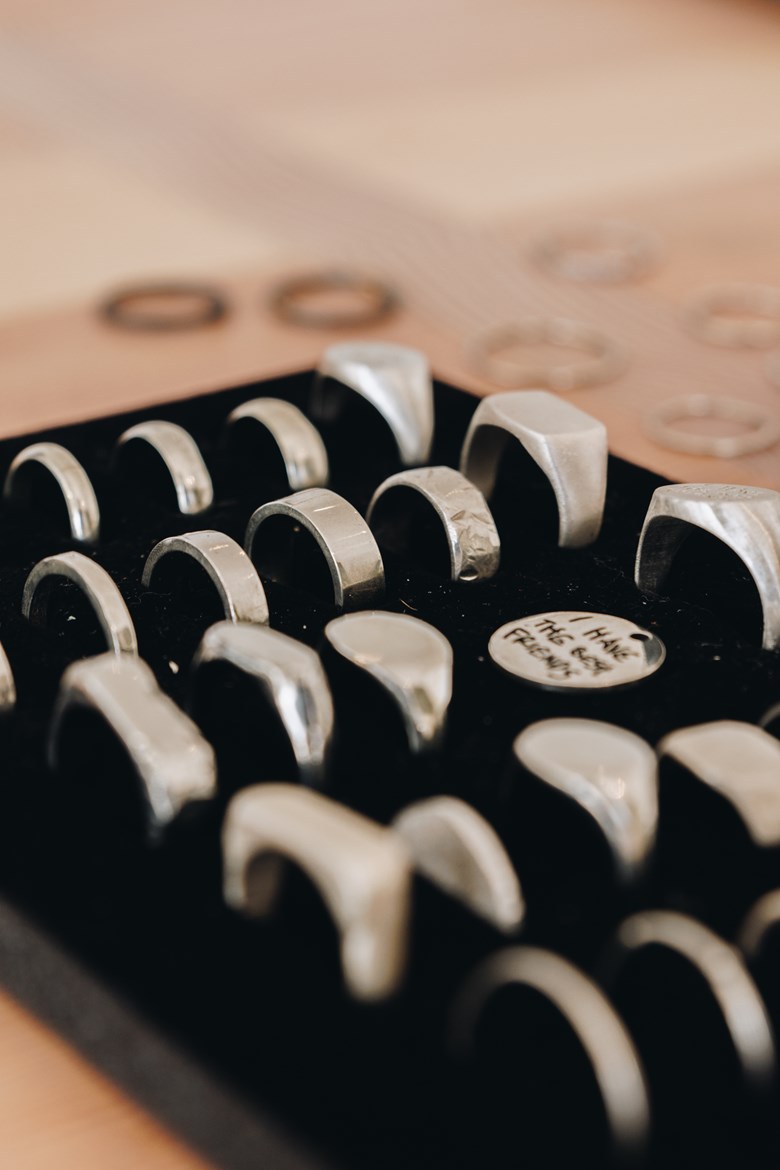 Tell me a bit about your creative background…

“I was taught by a beautiful mentor of mine who is still a jeweller today. I learned through him, and it has always been my passion. I made my sister this little heart necklace all those years ago and she still wears it to this day.

“Jewellery was always there if I needed a quick buck. I would jump back into it, make some pieces, and then sell them at local markets or to friends.” 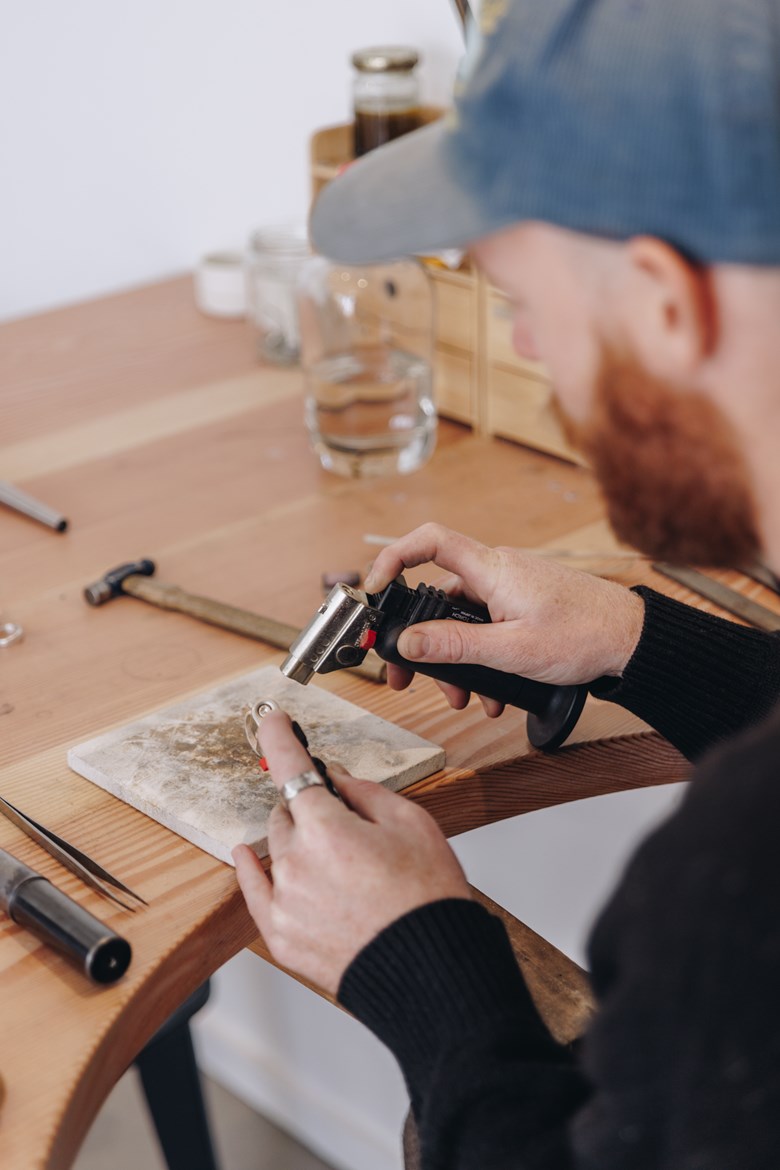 How did Fifth Lane come about?

“Originally, I wanted to pursue competitive surfing and I did ok but kept falling back into jewellery. I was also a barista in between travelling with surfing, so I kept coming back to coffee and to jewellery which is why I created this space; it’s the best of both worlds.

“It’s been a slow and organic evolution of the business. About five years ago I started doing workshops. It started randomly with a mate’s birthday. I had taught them to make some jewellery and we had some beers. They really loved it so I decided to start offering them to the public. The workshops really brought my passion back, watching other people getting creative.” 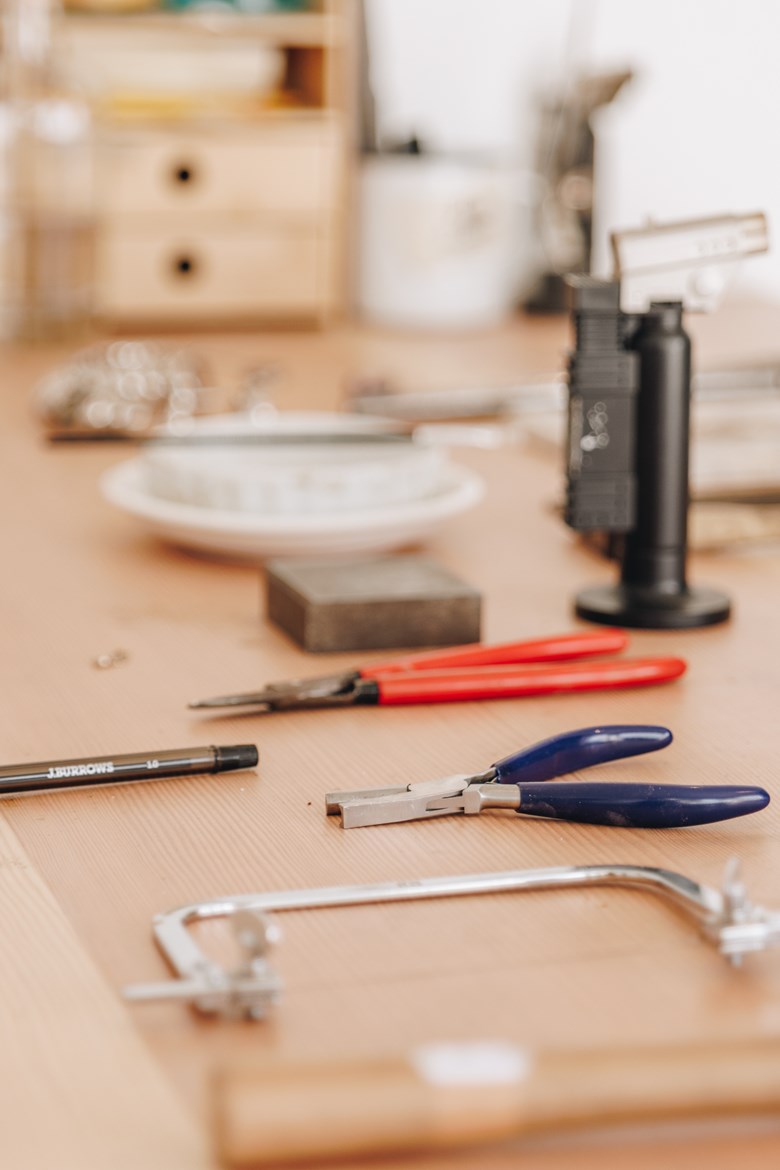 What can visitors expect from Fifth Lane?

“Our style is very much focused on metals. I do dabble in stones, and I’m about to release an engagement range but with a very specific Fifth Lane style. I kind of just use straight metals with a very organic and handmade style. It’s kind of coastal, it’s kind of industrial but with a minimalistic style. It’s quite thin and not too aggressive. 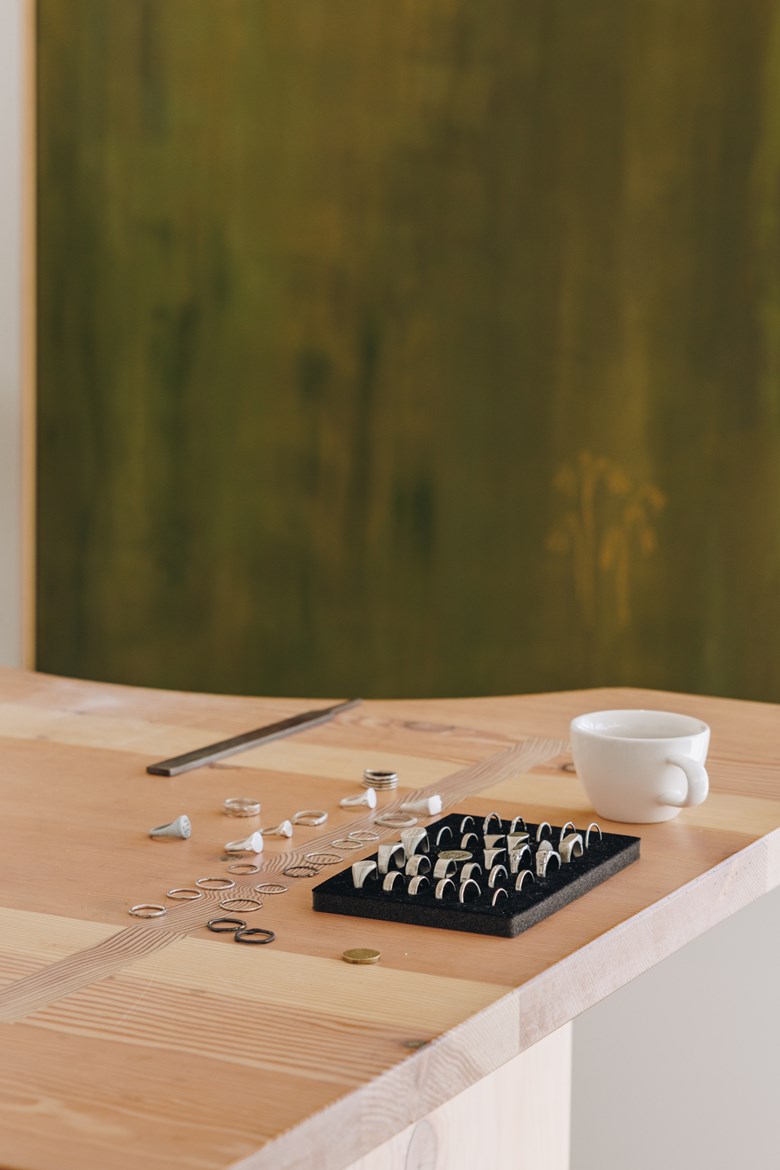 “We do our workshops eight times a month at the moment. This is why this space, Studio Lane, really came about. We do two a month here at Studio Lane, as well as Upstairs Wines in Long Jetty, Centered Ceramics at Umina, two workshops in Sydney, and once a month I drive to Byron Bay and back.

“It’s a really fun night. You have a few wines and get out of your comfort zone. There’s no pressure because everyone sucks at the start! By the end of it, everyone has made these really impressive pieces. Because its metal, you really can’t mess it up.” 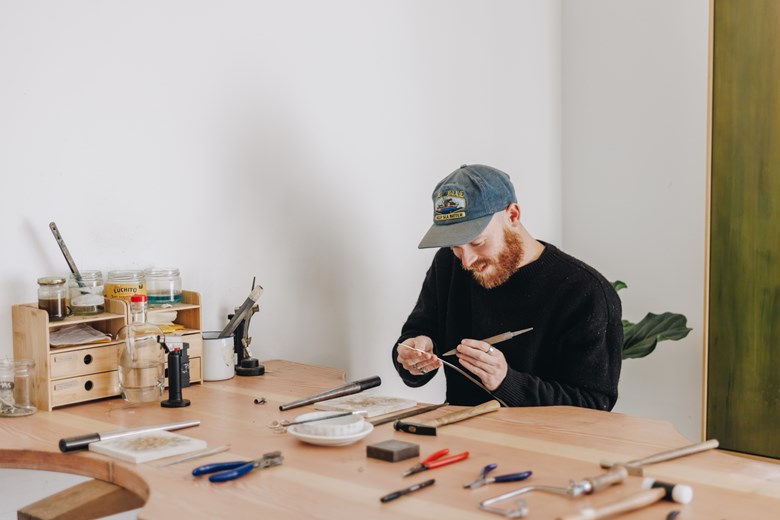 What is the most rewarding part about creating with Fifth Lane and running Studio Lane?

“I think with the workshops, it’s just seeing someone build their confidence throughout the workshop. At the start, they’ll be holding back and a bit shy. By the end of it, everyone is laughing, and it puts me in such a beautiful and happy place that I get more creative and confident in my own work. 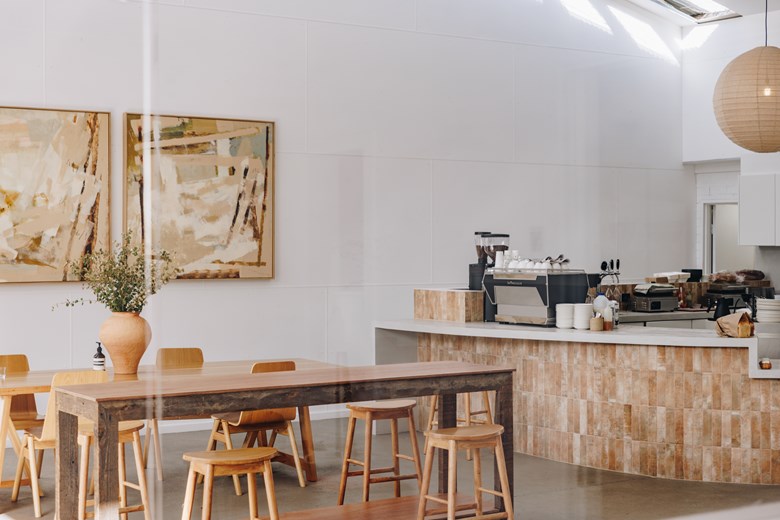 “We’ve only had this shop for eight months, and it’s been wild. Not too long ago we had a fundraiser downstairs, and it was completely full. I was standing upstairs and just looking down and I just said WOAH; we did this.”

When you’re not busily creating in this space or working on a big project elsewhere, what are your three favourite outside of works things to do on the Central Coast?

“I definitely need to get in the ocean. Whether to swim or to surf. I like Avoca near the palm trees; that’s usually where my little dad's group gets together to surf. From there and to Wamberal are my two spots. I also have two kids, so we love getting them out whether that be just down in the park. Avoca is such a beautiful area for kids and family.

“I generally also end up coming back here to Studio Lane on my days off. I’ll come in, taste the coffee, make sure everyone is happy and see all of our customers when I’m not in that work zone. I end up just hopping around every coffee shop on the coast too.” 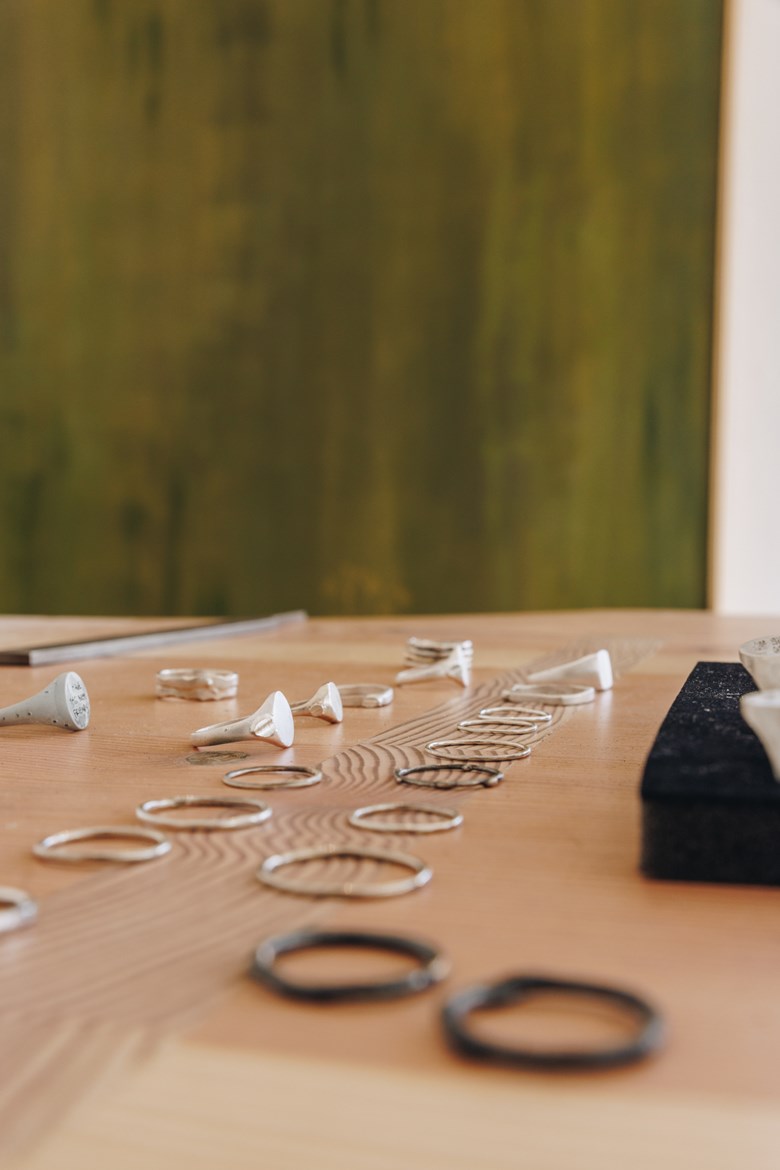 What are your top three local dining suggestions when people ask you for recommendations?

“LA Taco in Ettalong is sick! I rarely go out for dinner, but when I do I love Bar Toto in Ettalong. The last one would have to be Rigatoni for Toni who does pop-up pasta events. I follow him around wherever he is popping up. He just does some of the most insane pasta all made by hand.” 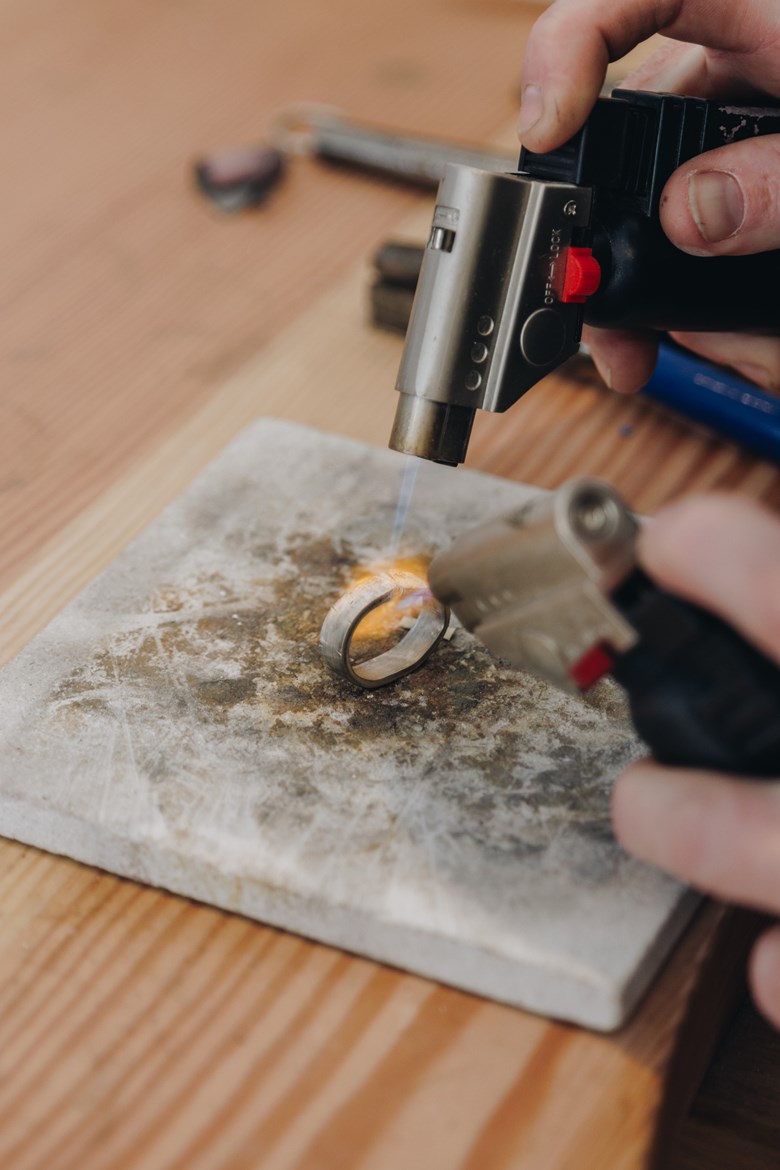 Having to always be in the creative mindset when working on a project, is there a place or something you do on the Central Coast that helps ignite that creativity?

“Running my own workshops is where I get my creativity. I love seeing other artists and watching how they grow. I’ve been sticking to the same thing for a long time, so when I see other people doing new things, that gets my creative flair going. Just seeing people getting out there and giving something a crack ignites my creativity.” 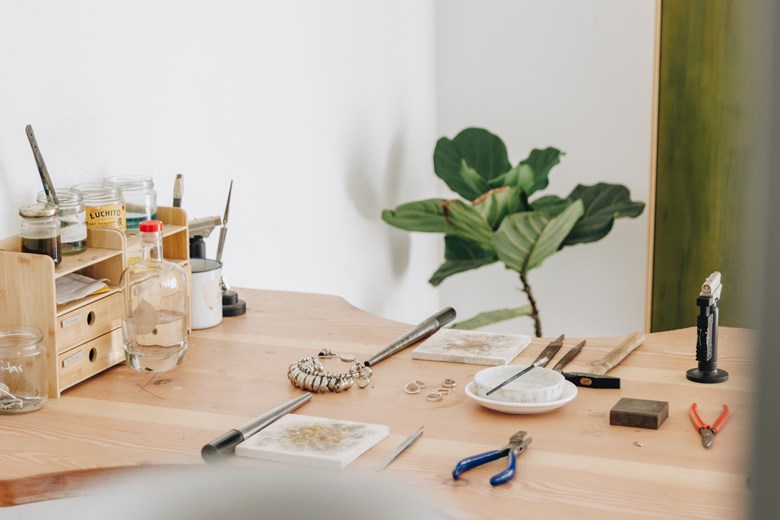 If you could spend one perfect day on the Central Coast, what would it involve?

“When we do have time, it’s usually with the kids. We start by heading to Burnt Honey Bakery in Copacabana. We’ll grab a little treat, I’m a coeliac so I can’t eat too much but they do have the most amazing quiches that I can eat. We’ll go for a swim, followed by a brunch or lunch at Like Minds Avoca.

“Then, we’ll normally go up to Long Jetty on the scooters and skateboards with the kids. Stop off at Upstairs Wines and pick up a bottle to take to find a sunset somewhere. Then home to get the kids back to bed.”