Burnt Honey Bakery has been a local favourite of Copacabana since opening its doors in 2019. Now owners Hayley Thorncraft and Jo Fairall have brought their top notch baked goods and breads to the hip and happening main drag of Long Jetty. Hayley sat down with us to chat about Burnt Honey, their love of the Central Coast, and connecting with their community.

Thanks for taking the time to chat with us this morning Hayley and congratulations on this second location for Burnt Honey!

Are you both originally from the Central Coast? If not, what brought you to the area?

Jo is from the Northern Beaches and I’m from the coast. After we got married, we went over to the UK, travelled around Europe for a while and then came back and settled here. I’m from Bateau and it’s important for me to be close to my parents and also it’s a lot cheaper to open a bakery on the Central Coast than it is in Sydney!

We actually came to Long Jetty before we went overseas for a couple of years, and we were just sitting over the road at Glass Onion and we thought “yeah maybe this is where we need to come back to” and decided in a snap like that and then that was the plan and that’s what we did! 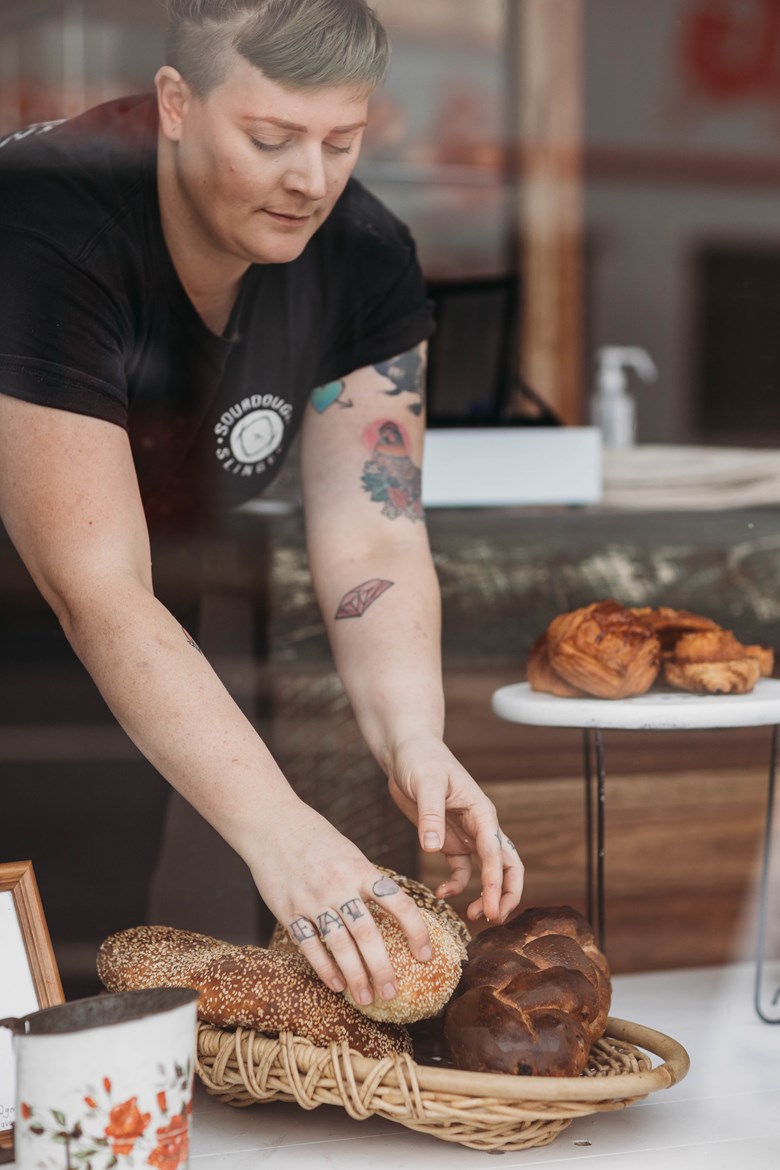 Your first Burnt Honey Bakery was launched in Copacabana in 2019, have you always worked in the baking/patisserie world?

We opened Copa in November 2019 so just months before COVID, but thankfully because of what we do being primarily takeaway and staples, we weathered the storm pretty well really and I’m grateful for that everyday.

I’ve not really always been a baker, no. I’ve been in hospitality pretty well my whole life, just in fast food from when I was a teenager all the way through uni. I got sick of the casual hours and lack of consistent pay and went into an office job for a couple of years and my legs were twitching, I just hated sitting down so I was doing heaps of baking at home and bringing cupcakes into the office! So eventually I just thought screw it, I’ll give it a crack, enrolled at TAFE and within 6 months I had a job at BlackStar Pastry in Sydney where I did most of my training. 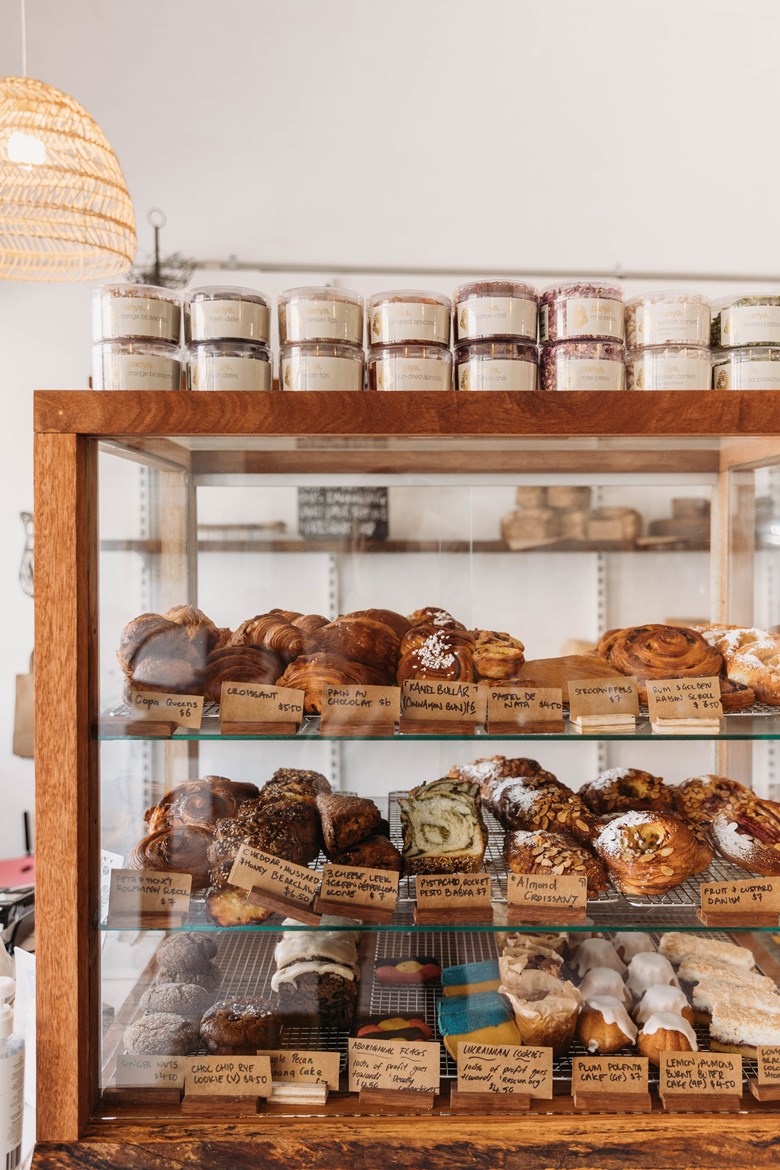 What initially made you want to open your own bakery, and what brought you to Copacabana?

Since I was a little kid my plan was always to own my own business but for a long time I didn't know what that was. When I started baking and seeing that wave of bakeries opening and how really into a good baked good people are, I thought it was a viable solution for us. Particularly being married to Jo who is a barista and front of house manager who has been doing that since she was 14 - it was just the obvious thing to do and it works really well. 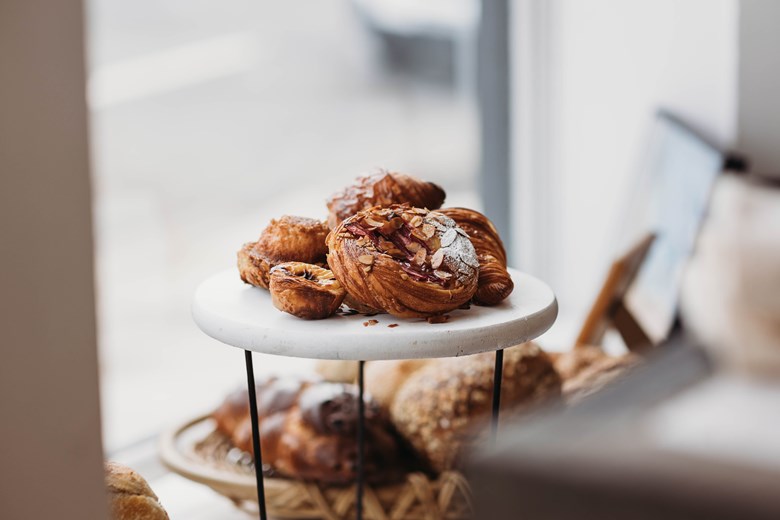 We looked all over the coast for about 6 months, it took us a while to find the space and in fact neither of us had really ever been to Copa, even as someone who grew up on the coast!

I went to go and see the place with my mum and you come down that hill, and there was this big rainbow that followed me all the way from home to the shop, and I got down there and realised just how stunning it is. Where else in the world could we be literally facing the ocean?! So as soon as we saw the place we knew “this is it”. 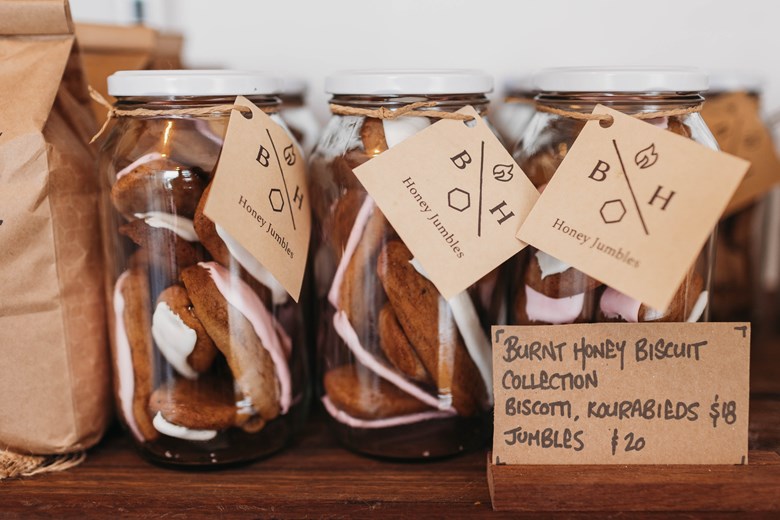 As of May 2022 your second Burnt Honey Bakery opened in Long Jetty, was the plan always to expand the business and why Long Jetty?

We’d had thoughts about maybe opening a second kitchen where we’d produce cakes, or if another spot came up in the Copa strip we’d take that and do something slightly different with indoor seating but then this spot came up and it just kind of happened.

When we were first looking to open the other shop two and half years ago we looked in Long Jetty and there wasn't anything available. I came up here one day to get my hair cut at Rhy Rhys and she said to pop up and have a sticky beak because there was a building with a for lease sign in the window. I actually had to call Jo and I said “I think I need you to talk me down because it seems like a great idea but maybe I’m getting carried away!” but we talked about it and thought actually yes, let’s do it! So it wasn’t a set plan to open specifically here and now, but it just happened. 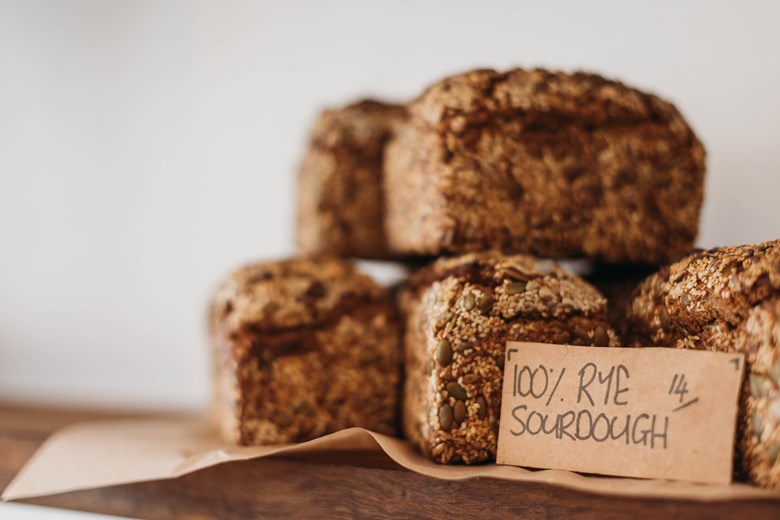 Do you have any plans at this stage to expand further?

No! It will be a long time before we think about anything else and it would likely be something like a bigger kitchen so we could do wholesale or something like that, but no plans at the moment. We will expand the pantry section of the Long Jetty shop and engage more local makers to sell their items, plus create a cookbook nook with a couch for people to relax in.

Since launching Burnt Honey Bakery, what has been the most rewarding aspect of running the business?

Honestly, I think it’s the connection we’ve built with community. It’s been so beautiful to get to know the people in the areas we are in. Also being able to bake things that remind people of places they’ve been, places they grew up, something their grandma used to make, that for me personally is the most rewarding thing. 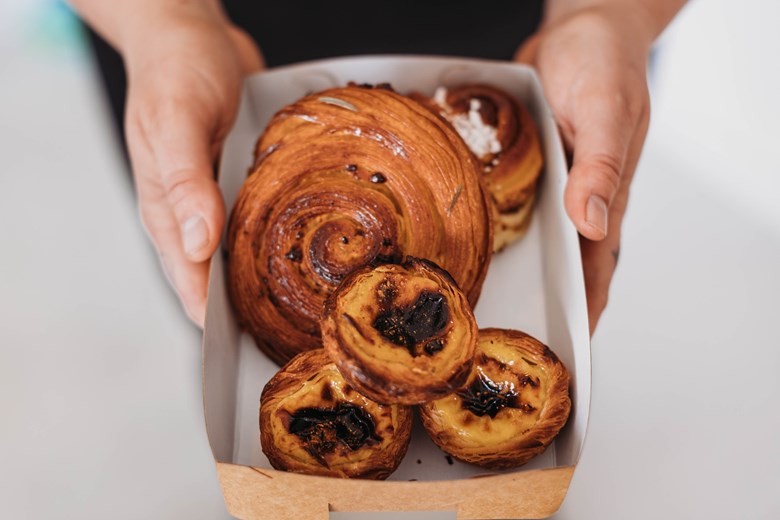 I had a regular customer send me an email with a photo of a cake that his parents used to have growing up in Spain and he asked if I could make it so I did and he said it sparked up these stories from when they were growing up. For something that is so simple and easy for me - to give that to someone else, it's just so special. It’s the connection that we all have with food, particularly with baked goods because it's comfort food, and that's part of why we do what we do which is the classics just with really good ingredients and really good technique. 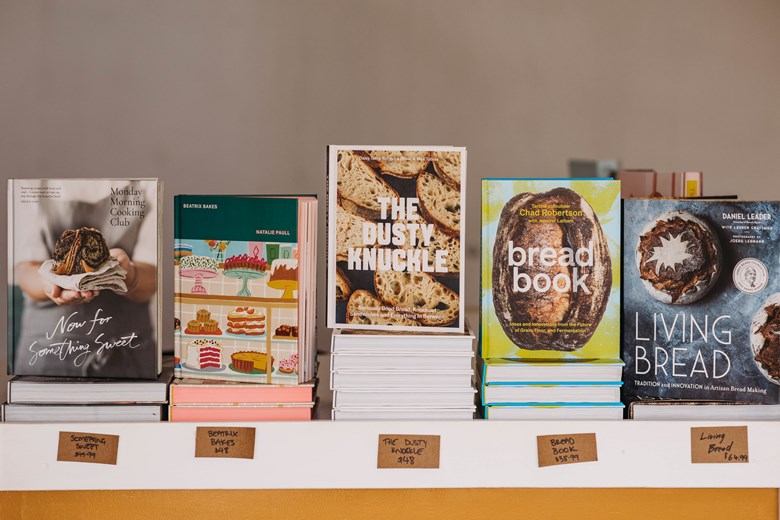 When you're not baking away, what are your three most favourite outside of work things to do on the Central Coast?

At the moment my #1 favourite thing to do is Strong Woman lifting at my gym in Tuggerah and Jo does boxing and has just taken up surfing. Other than that we both love kayaking so we go out at Toowoon Bay or Brisbane Waters which are just lovely. We’re so busy that we don’t do much else but stay at home and cuddle the cats or catch up with family!

What are your top three local dining suggestions when people ask you for recommendations?

Like Minds in Avoca, they are good friends of ours and wholesale some of our pastries and breads and they are just such beautiful people and the food they make is just so delicious and wholesome.

We’ve had some really good dinners at Yellowtail in Terrigal. We had one during lockdown and every single dish we had I was thinking “oh my gosh I wanna cry, this is so good!!”. I love that place.  Bar Botanica is also a beautiful place to go and just sit in that beautiful garden with a G&T and a scoop of gelato! 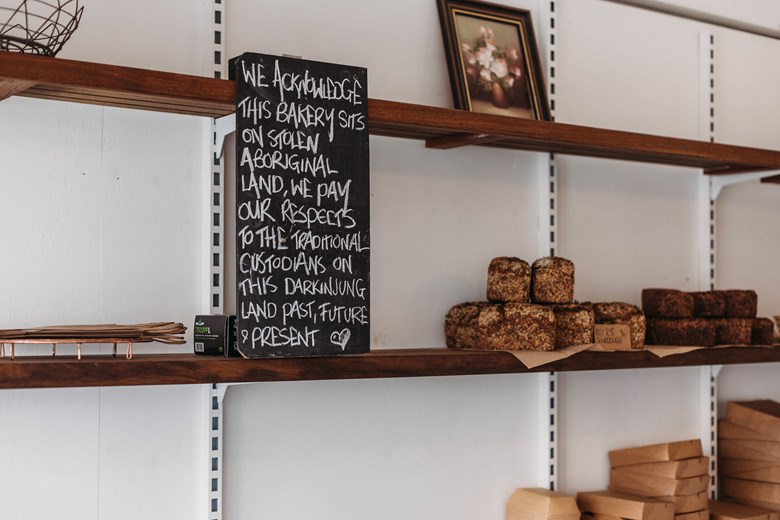 Beer, wine, cocktail or mocktail? If so, what is your local venue for a drink with friends?

Red wine is my thing, particularly in winter but we don’t often go out drinking with having to get up as early as we do, but probably Pocket Bar in Terrigal would be our pick if we do.

I imagine the baking/patisserie industry requires you to be creative and innovative. Is there a place or something you do on the Central Coast that helps to ignite your creativity?

Books are my creative fuel. I have a disgustingly large cookbook collection. I just buy cookbook after cookbook and devour them, particularly ones that are specific cultures. You come across so many baked goods that you would just otherwise never hear of and I just want to learn more and develop a recipe from there that works.

Travel is also obviously really inspiring and whenever we get a chance we’ll go for a drive somewhere. There is a much longer history with this sort of baking in Europe than there is here so I really enjoyed connecting with that while travelling. 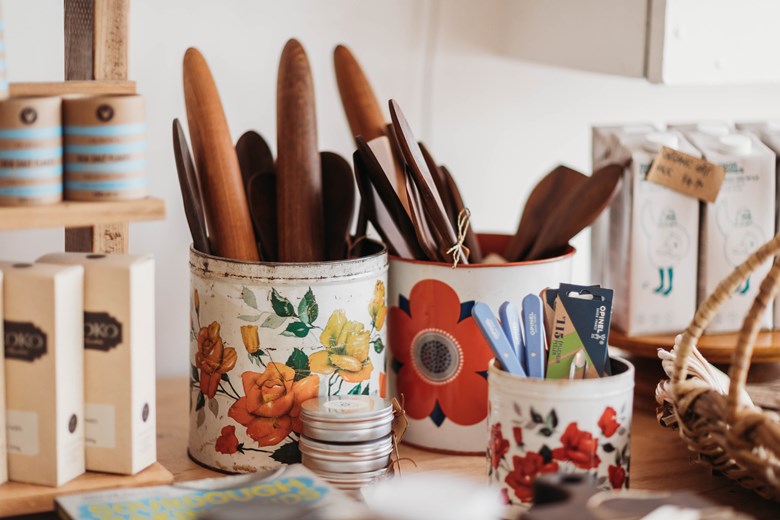 If you could spend one perfect day on the Central Coast, what would it involve?

I think just going for a beautiful bushwalk. Being in Bateau we’re really close to the Crackneck walk which I’ve been doing since i was in high school and it’s just so gorgeous seeing the sun shining through those trees and the water on the other side of it, it’s stunning. I do that walk with my mum a lot so it’s pretty special. Then a nice picnic somewhere I think!