Hiding just off to the west of The Entrance Bridge on the Central Coast sits an unassuming building housing the works of two of the coast’s most beautiful, friendly, and creative souls; Grant Molony and Chloe Jean Grant. The beautiful 70s-Esque facade overlooks the iconic Entrance waters and is home to the pair's colliding creative pursuits - Grant Molony Gallery X ROWSIE. 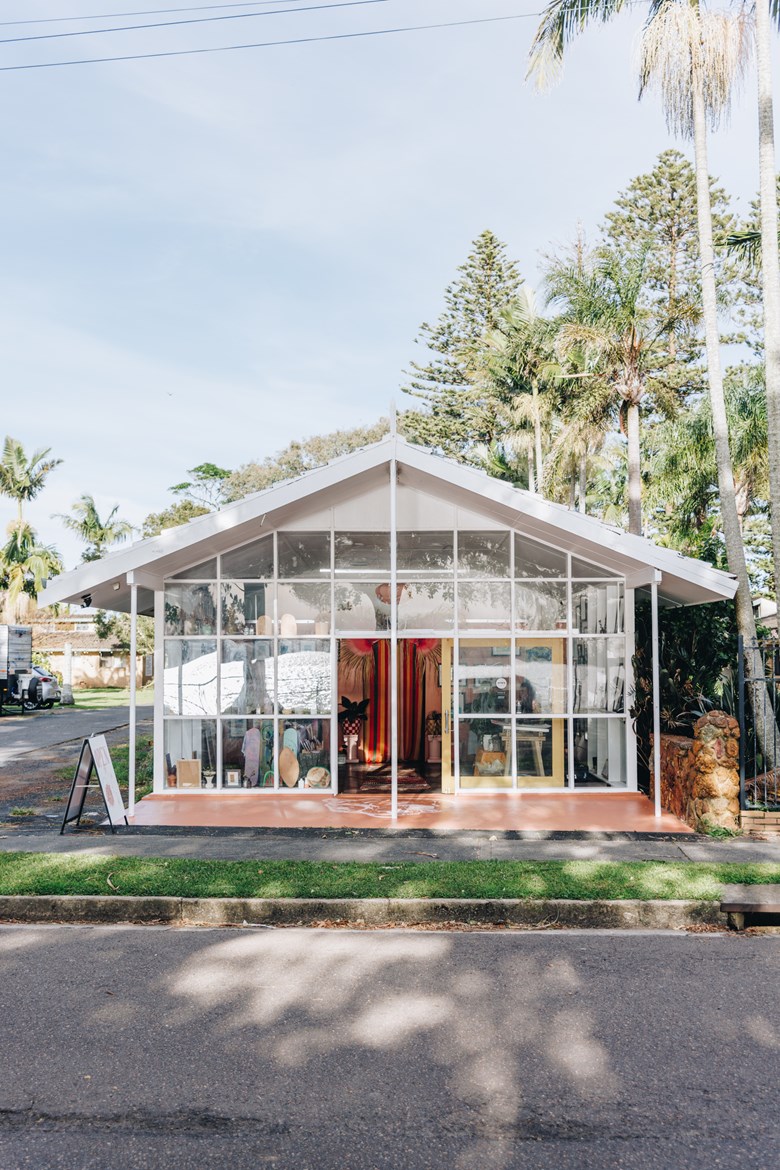 We caught up with the duo, to hear all about their individual pursuits, how the collaborative space came to be, and their top picks for all things across the Central Coast.

Thanks for taking the time to chat with us today Grant & Chloe, and congratulations on this beautiful gallery space right on the shores of The Entrance!

Are you both originally from the Central Coast? If not, what brought you to the area?

“I was born and raised here on the Central Coast. My parents actually had the first house on the street in Berkeley Vale and they’re still there. I’ve done a lot of travelling but I’ve always come back. The Central Coast is definitely home,” Grant said.

“I grew up in Sydney until I was ten years old, then we moved to Bateau Bay and have been here since,” Chloe said.

Grant, tell me a bit about your creative background…

“I have an indigenous background and I also have four brothers. I grew up in the surfing community and the ocean was my first real love but in my spare time, I was always kind of sketching and keeping busy. If there were no waves I would just be found sketching away. 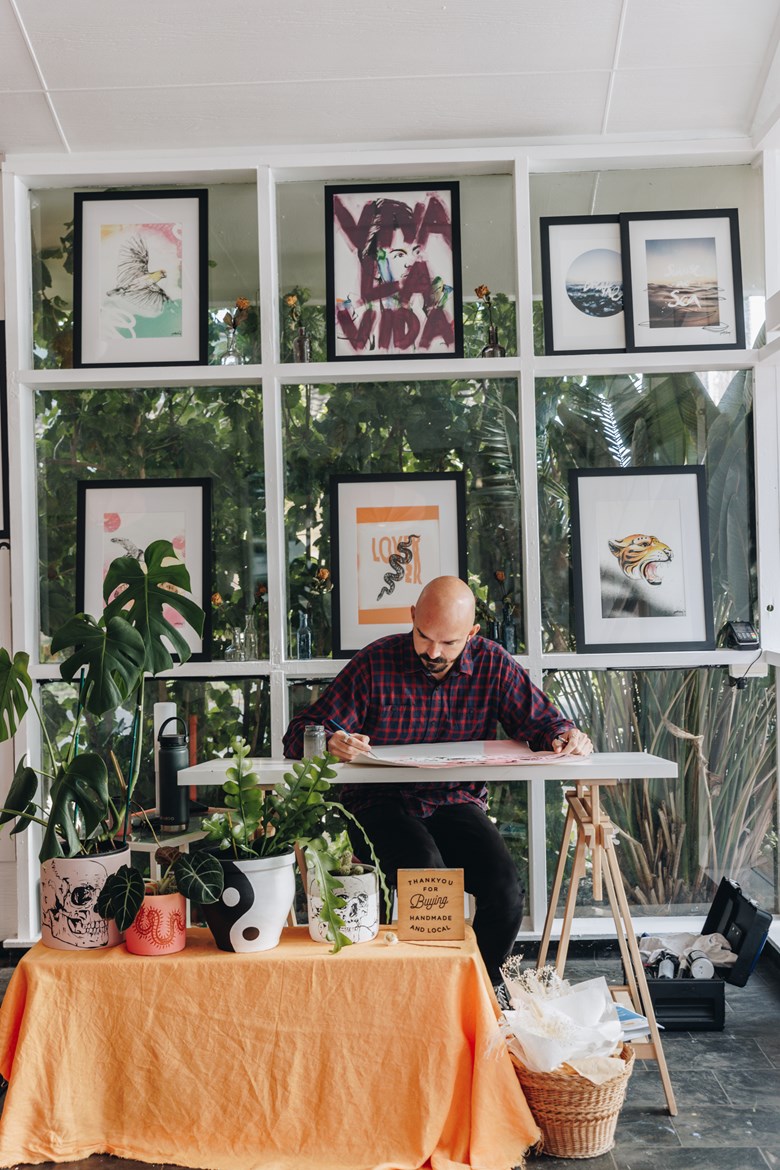 “My grandparents on both sides were creatives. One of my grandfathers had a little calligraphy studio. He had a little setup at home with all these different inks which I was most attracted to. The ink was a big thing for me because I went from using just pencils as a kid to progressively getting that contrast with colour using really nice Japanese inks. I used that for a long time, in fact, I used that exclusively for a while.

“This is me full-time now. I was always doing it in the background, but the ocean and surfing was where I spent most of my time. I couldn’t get paid to do that, it was a distant dream to do so, but this was my next best option. It still took me a really long time to be brave enough to pursue this full-time. 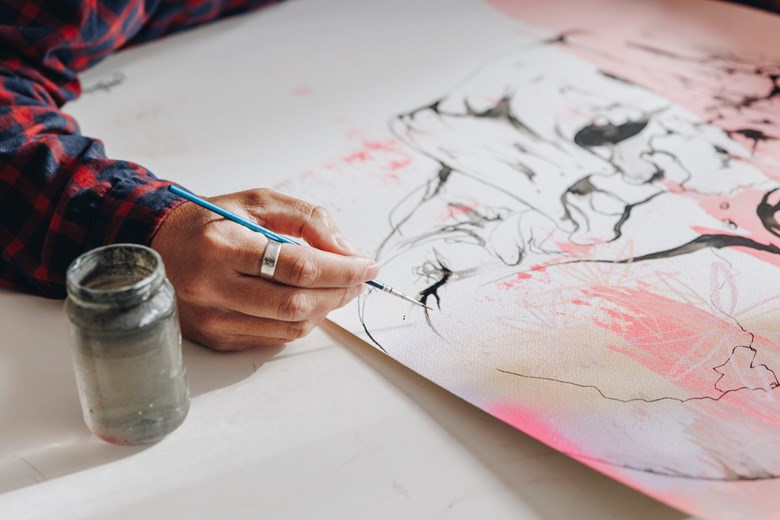 “Recently, I’ve just been down at Urban Surf, which is the wave pool down in Melbourne, where I’ve been working on a mural. They’re building one in Sydney too, and I’ll definitely be working with them on something for them there too.

“I really like doing collaboration-styled projects. My brother works with me, but he does a lot more traditional style, which really enhances my work. I have another guy who is a graphic designer, and we have a company together called General Admission and we make shirts and cards and things like that. 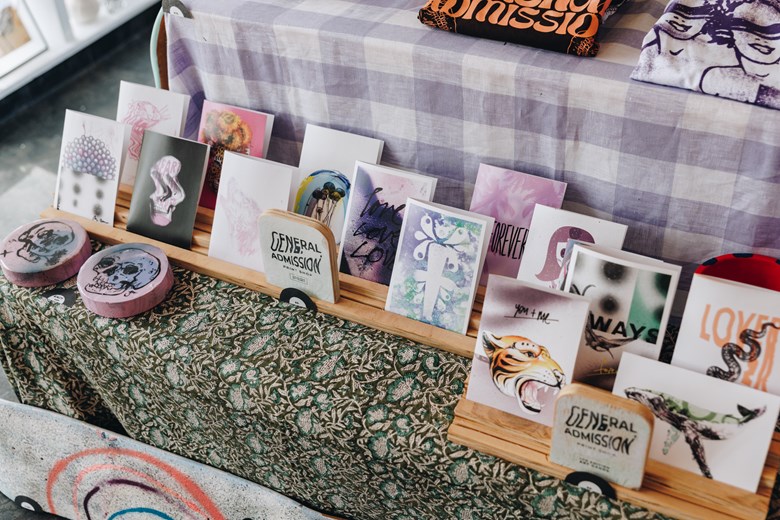 “I’m working towards some collaborations with a local brewery; Bay Road Brewing out at Gosford. I’m also working with NAISDA which is the National Aboriginal Dance School and I’m doing a residency with them. The work is really varied, and I think you kind of have to be in this industry to survive. Especially here on the coast.” 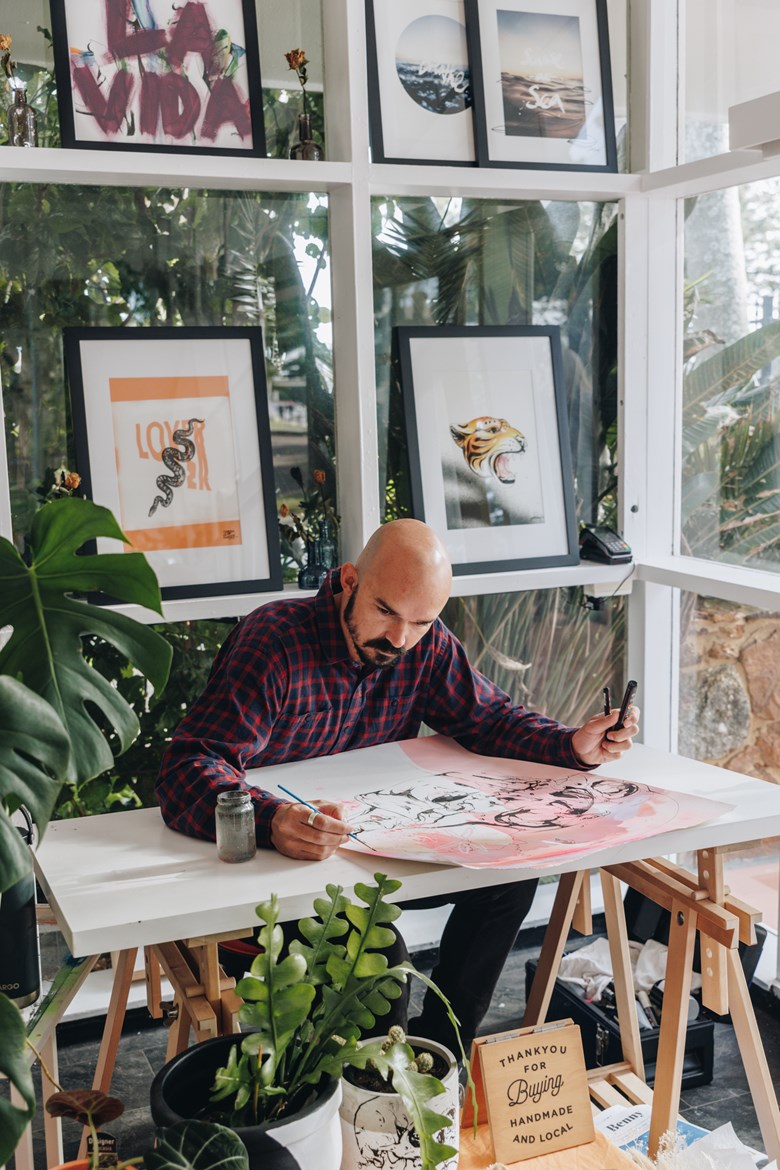 Chloe, tell me a bit about your creative background…

“When I had Millah, my first born, I started a children’s wear label called Mrs Millah. I was originally just doing it myself at home for her, but then I had people that wanted to buy their own pieces and it really just grew from that. 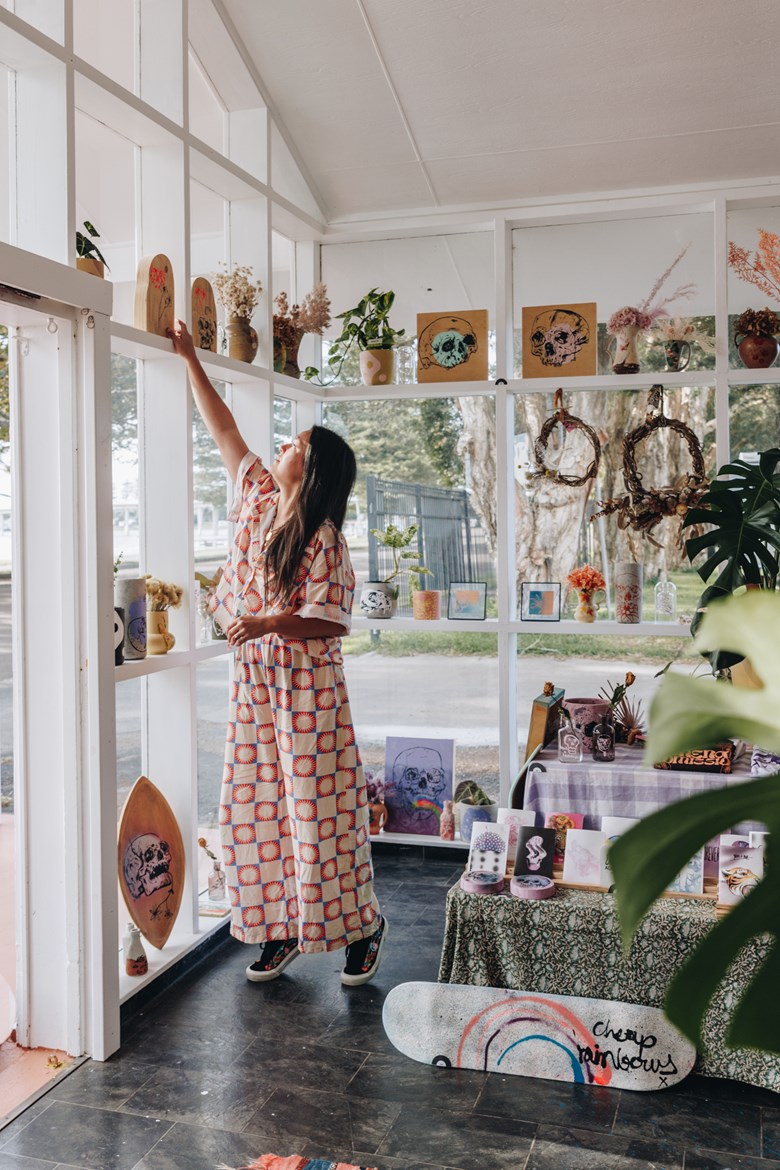 “Everything really stopped for us when COVID hit, and I kept wondering what I was going to do. I had done heaps of events over the years for friends and put little things together, then one of my friends suggested I create some flower arrangements and do drop-offs. So, I did! This was through ROWSIE, and I was lucky enough that there was quite a bit of interest and it just grown and evolved since then.”

How did this collaborative space, Grant Molony X ROWSIE Lane come about?

“I had a shop in Long Jetty, and Grant was across the road, so, we thought we would do something together and for ourselves, so we ended up moving into a space and here we are,” Chloe said. 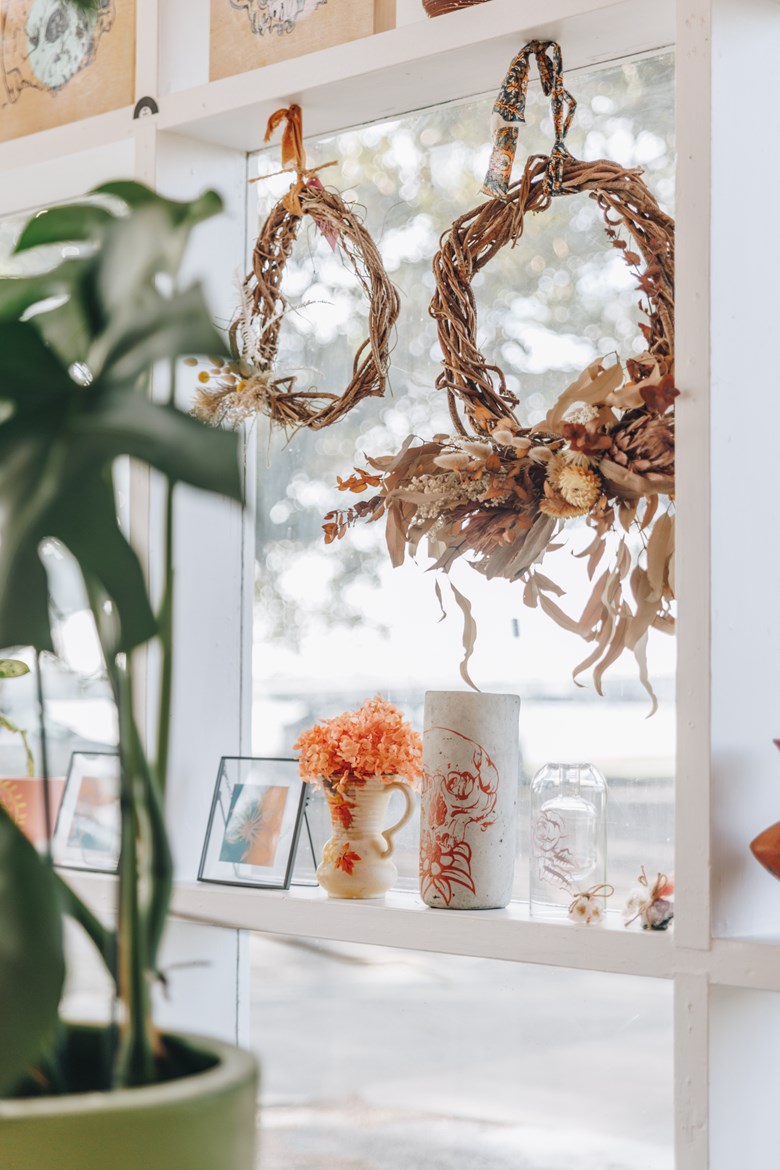 “We actually just stumbled across this. It was such a dump when we first saw it. It was filled with mattresses all the way up to the ceiling. From the outside, it was navy, red, and green; it really blended into the environment,” Grant said.

“I saw it, and I knew it was such a wasted space because the building was just beautiful. The natural light coming through was just magical,” Chloe said.

What encouraged you to choose The Entrance as your gallery location?

“We just drove past because we were looking for a space. We wanted something bigger so we could hold events in the future. A lot of the spaces we originally looked at were out like Tuggerah way and were a bit more of a factory vibe, and we didn’t really want to be out there. 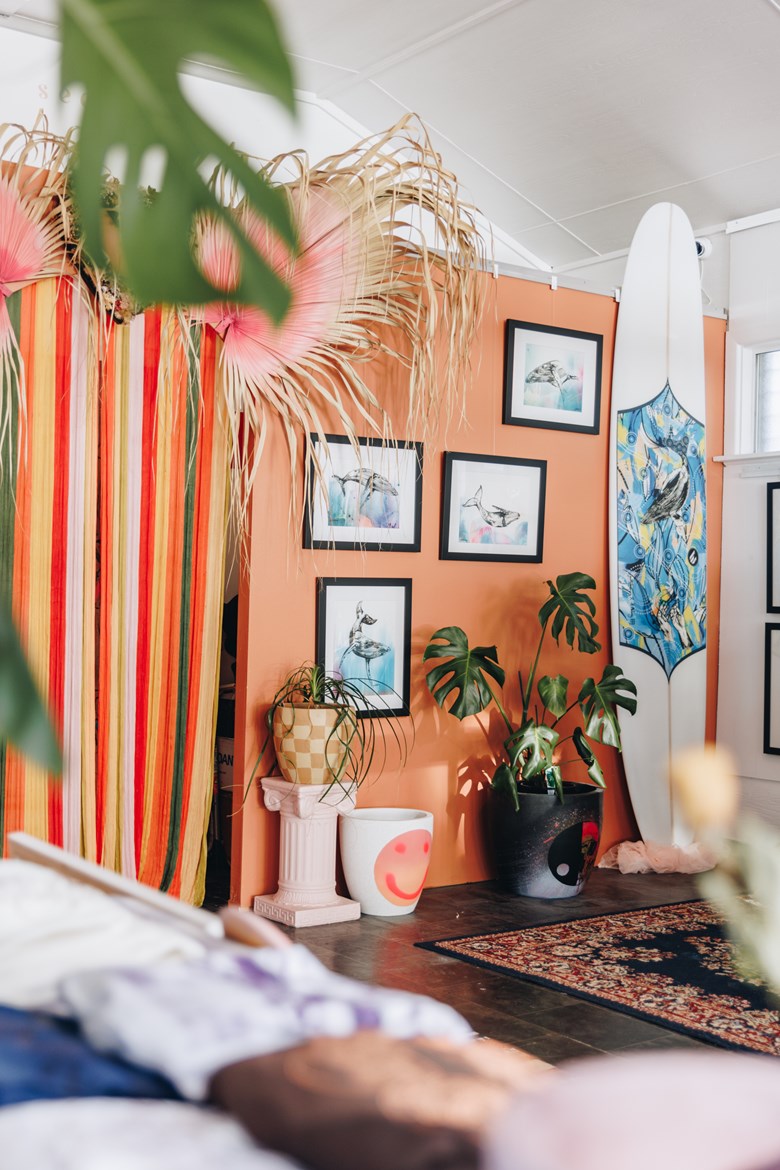 “I wanted people to be able to do other things around us. There wasn’t a lot out there, and here, there’s enough for people to make a day of it. The pub has just been done up, and there is great coffee from Albie’s just around the corner,” Chloe said.

“This space is fully multi-functional. Chloe is definitely more interested in throwing kids’ parties and workshops. So, when that is happening, we basically strip out the whole space and just have tables in here. There is nothing like these workshops that Chloe runs here for kids across the Central Coast. It’s nice to be able to offer a creative project for kids to get involved in. It’s nice for kids to be able to make something too, and to keep it,” Grant said. 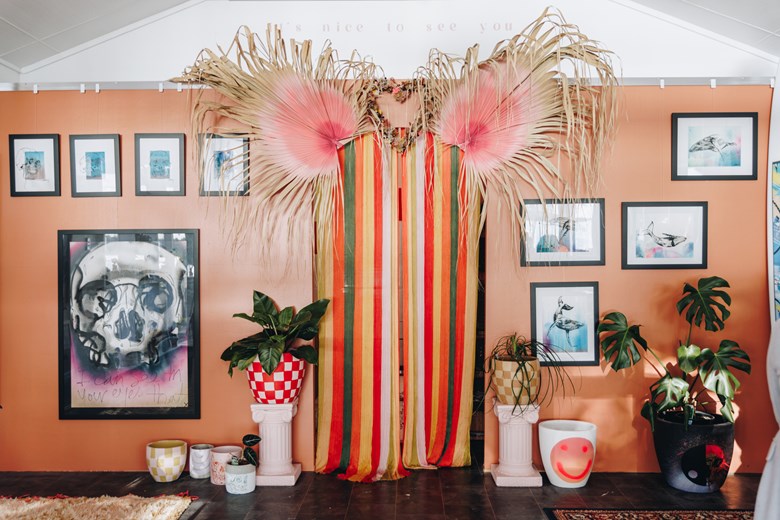 “Week to week, when I haven’t got big projects going on, I’m here working on small stuff or office stuff. We open by appointment here, so if I have no site-specific jobs, you can usually find me here. It’s just such nice light in here to work with,” Grant said.

“Short term though, we’ve talked about doing some art classes in here once a week. It’s very much just in the idea stage,” Chloe said.

When you’re not busily creating in this space or working on a big project elsewhere, what are your most favourite outside of works things to do on the Central Coast?

“We’re generally pretty quiet, but it’s probably kid-related things. We’re pretty busy with kid's sport over the weekends but we love taking Kevin [the dog] to the beach. 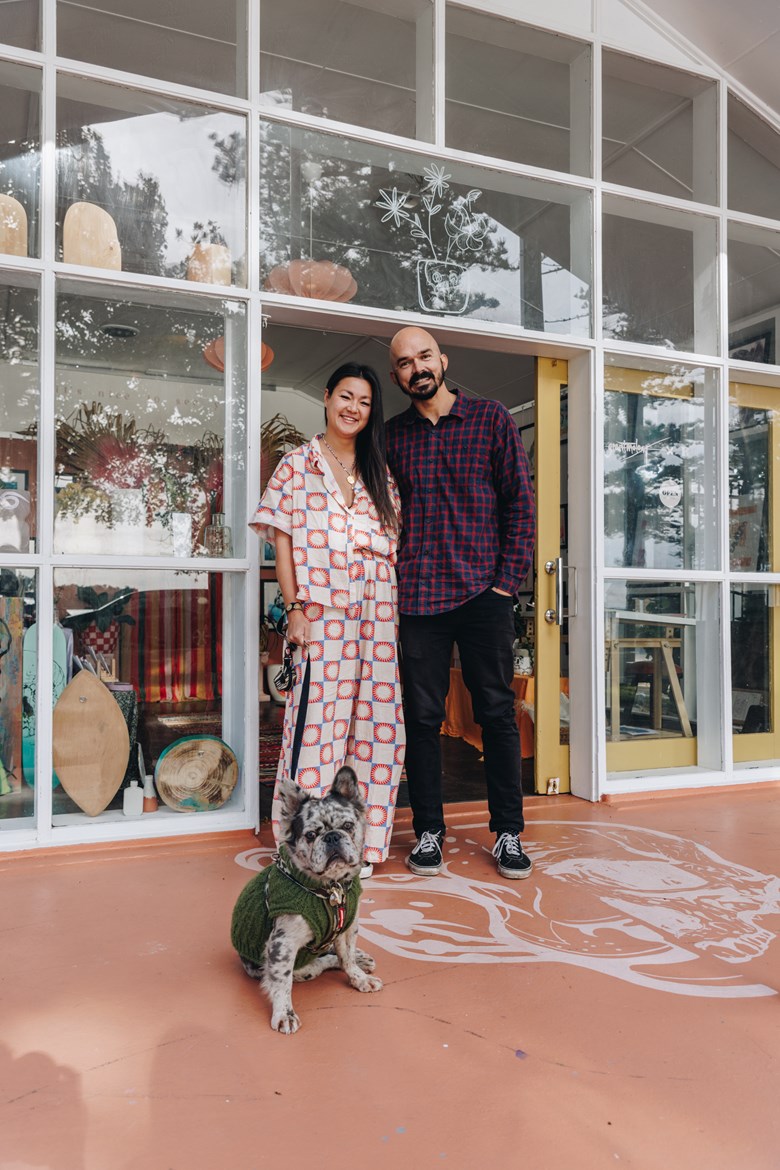 “Our favourite spot is probably next to The Entrance Baths with the kids. We do spend quite a bit of time there. There is a sneaky little beach next to the ocean baths at The Entrance and there are some great little spots for the kids to swim in,” Grant said.

“The kids really love bike riding. We’ve got a park down the road and it’s just perfect because it has a track the whole way around it. They can go at their own pace, but we can still see them,” Chloe said.

What are your top local dining suggestions when people ask you for recommendations?

“We like the Vietnamese here at The Entrance, it’s called Saigon Chopsticks and that’s our casual spot where you can grab some great takeaway. The Japanese from Yasaka Japanese Dining in Long Jetty is another favourite,” Chloe said. 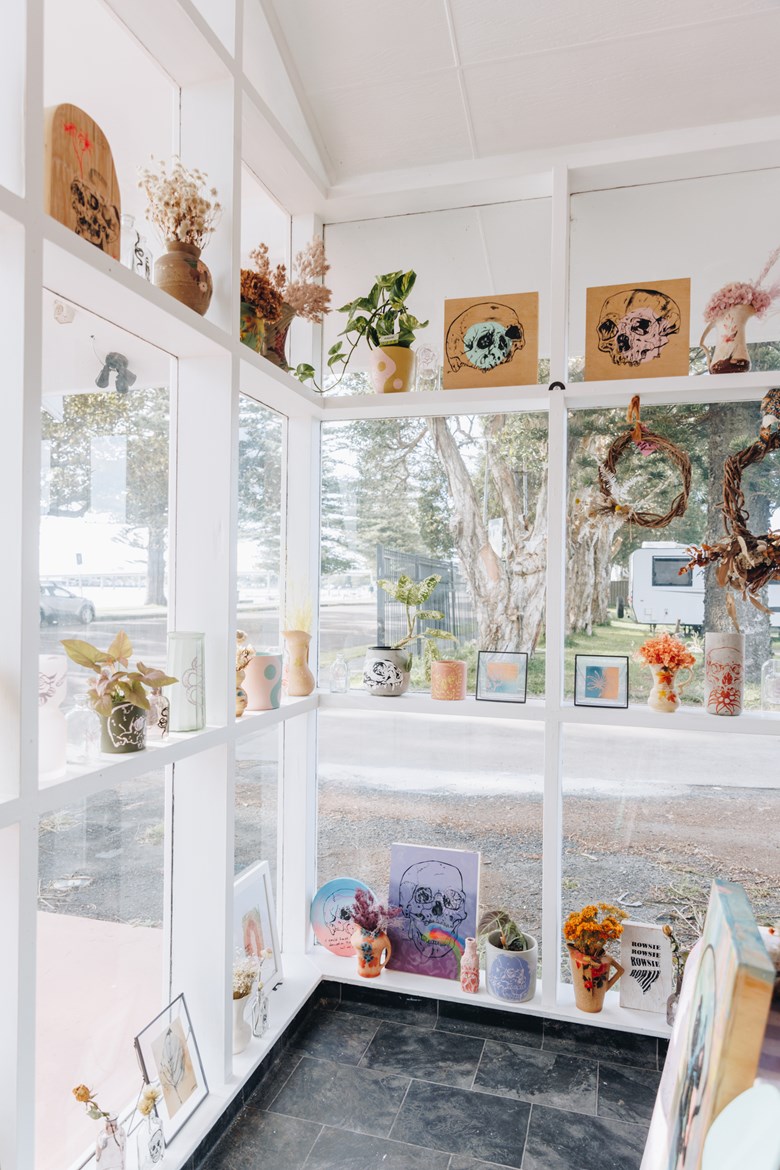 “As far as a sit-down nice meal goes, there are a few places in Ettalong and Woy Woy that we like, and Chloe really loves The Lucky Bee in Hardy’s Bay,” Grant said.

What about coffee? Where do you get your daily cup of joe?

“Albie’s just here on the corner do a really good job. Our place is also just down the road from Flour & Co which is great. The Lucky Surf & Supply in Long Jetty and The Morning Coffee Society are both really good too,” Grant said. 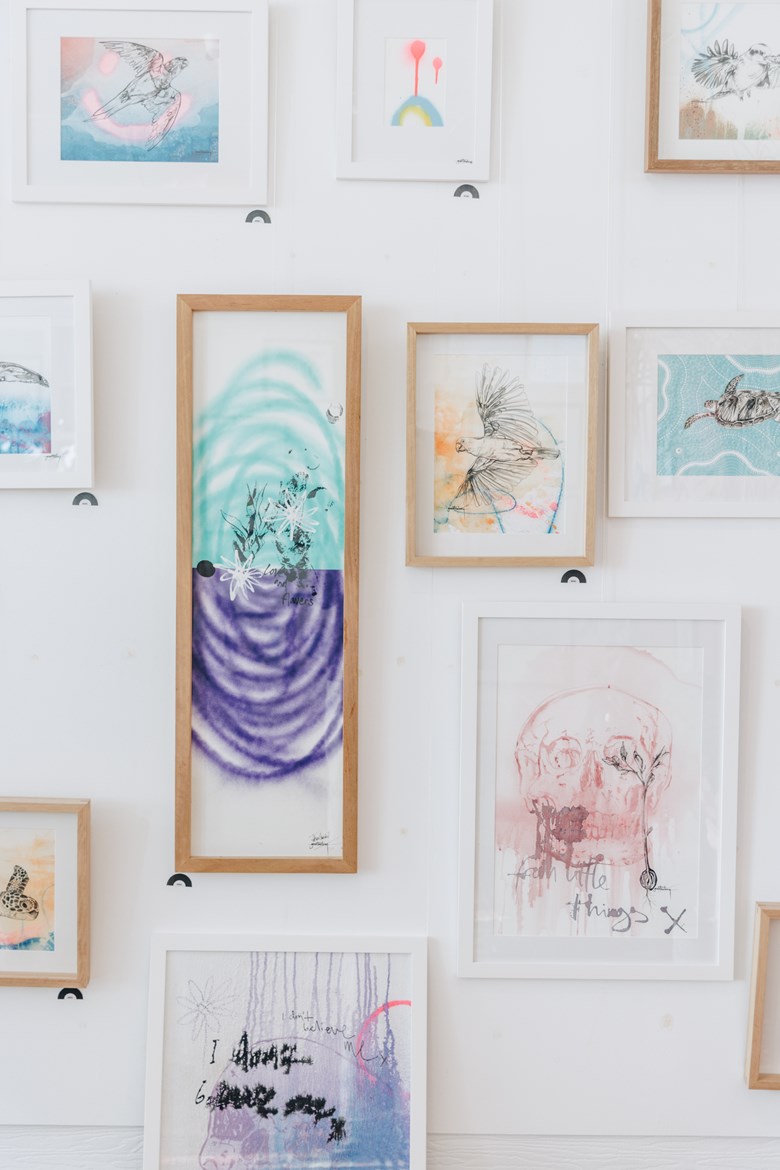 Having to always be in the creative mindset when working on a project, is there a place or something you do on the Central Coast that helps ignite that creativity?

“It’s absolutely just spending time with family and being by the ocean,” Grant said.

Describe your perfect day on the Central Coast to me… what exactly would the day involve?

“Again, it would just be revolved around spending time with the kids and with Kevin and going to the beach. It’s all pretty simple stuff,” Grant said.

Orange, natural organic wines in every colour of the rainbow