LAATE is about supporting the people who work hard and play harder, it exhibits art, fashion and skate items.

Originally from the Central Coast, young couple Laura and Adam have brought something pretty special to Hunter St, LAATE, a skate store offering house-branded tees, Aussie denim, an eclectic mix of local and international skate brands and apparel as well as some incredible skateboard decks and skate related artwork and photography donning the walls.

Both skaters themselves, LAATE is adding some love to Newcastle's skate scene and challenging the status quo. Adam co-owns Arrow Skate Co, Australian, and skater run wheel company as well as his own skateboard company, Scram. Both of which you can check out for yourself in-store. 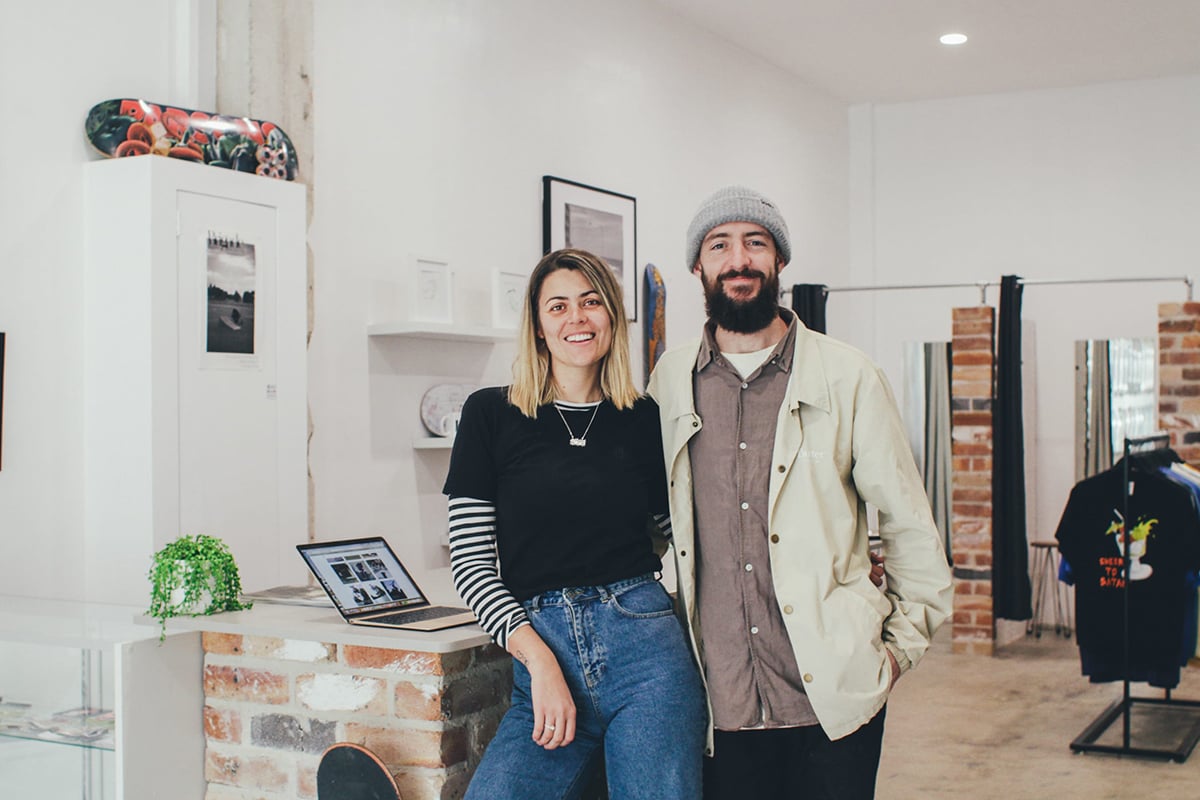 “This has been in the works for about a year and a half. From business planning to now having an actual functioning space. Adam had his skate businesses in the works for ten years prior to this happening and we had a lot of help from people that he’s met over the years in that skate scene,” Laura told me.

The space itself looks like a grungy exhibition space, that has been decked out from top to bottom with unique skate culture apparel, art, jewellery, and skate decks. 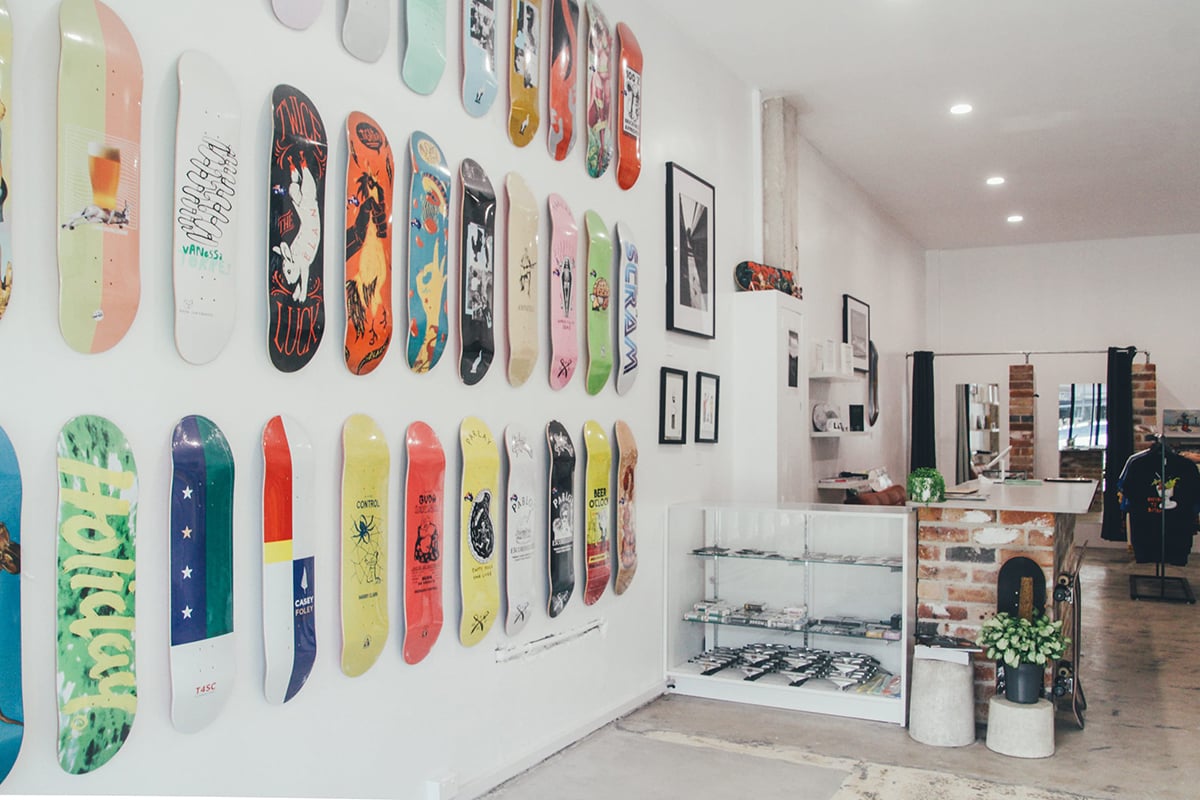 “We’d been looking for a space for three months before we settled on this one. It was hard because Adam was still living on the Coast and I was just sending him photos and videos of places that I’d walk past. This place wasn’t even for lease by a real estate company, it just had this little hand-written note with a mobile number on it in the window.

“I couldn’t see too much, but it was this long open space that looked really cool with these really white walls. We came and had a look at it, and we both just loved it.”

Opening their doors early June, the couple has been making waves, or should I say air, in Newcastle skateboarding scene. Bringing it back to basics, the store is all about that community vibe and bringing likeminded people together.

“We wanted to create a space that was more inclusive of people within the subculture of skate. To be more inclusive of girls in skate, as well as local Australian brands and supporting those small skater run brands brands in the market. 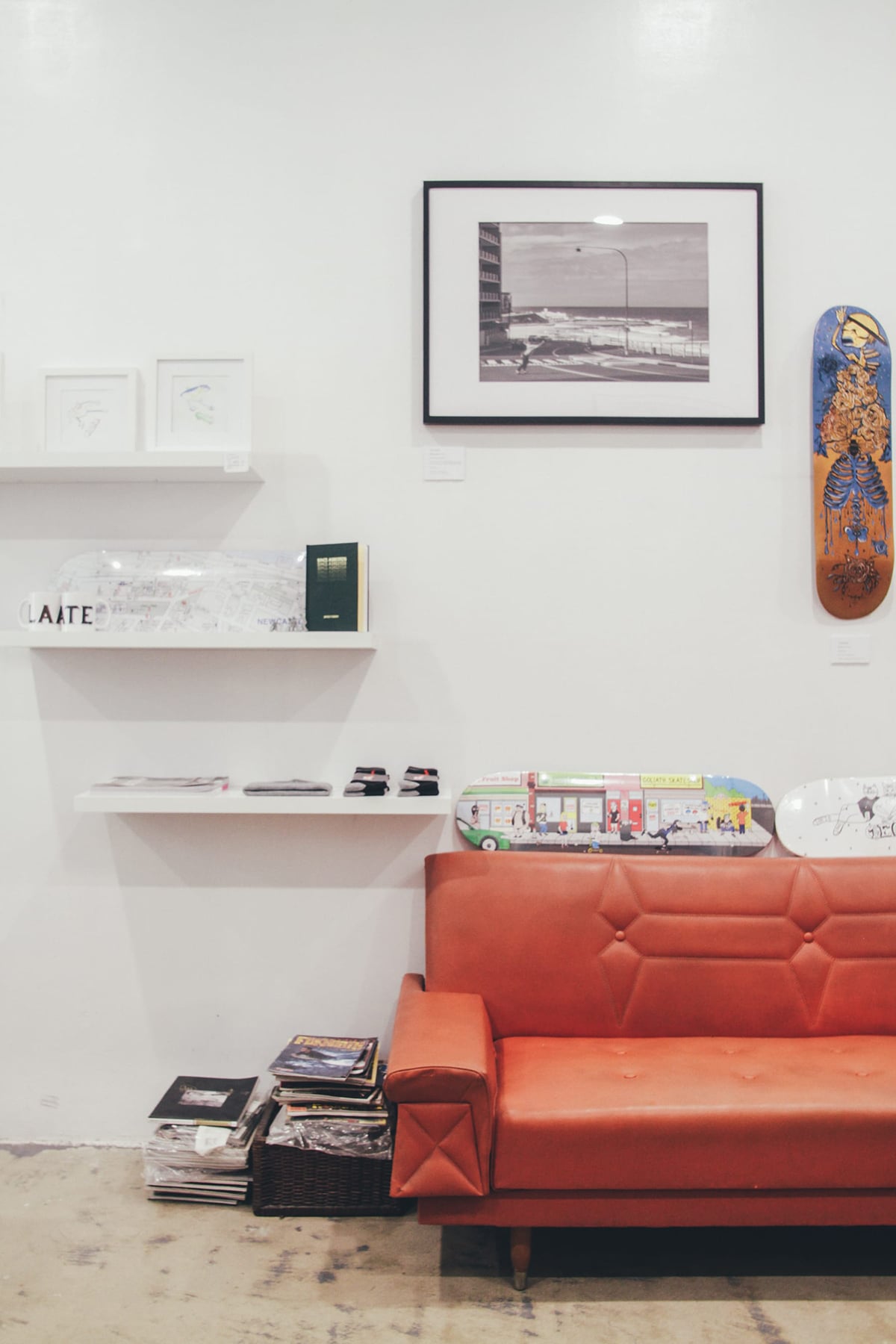 “Australian brands will never be as big as the big commercial brands unless the locals get behind them and show support. That’s kind of what we’re trying to do.”

Now the name, pronounced late was not quite as easy to decide on. One thing Laura and Adam didn’t think about, was its closeness to a rather coffee related name; latte. 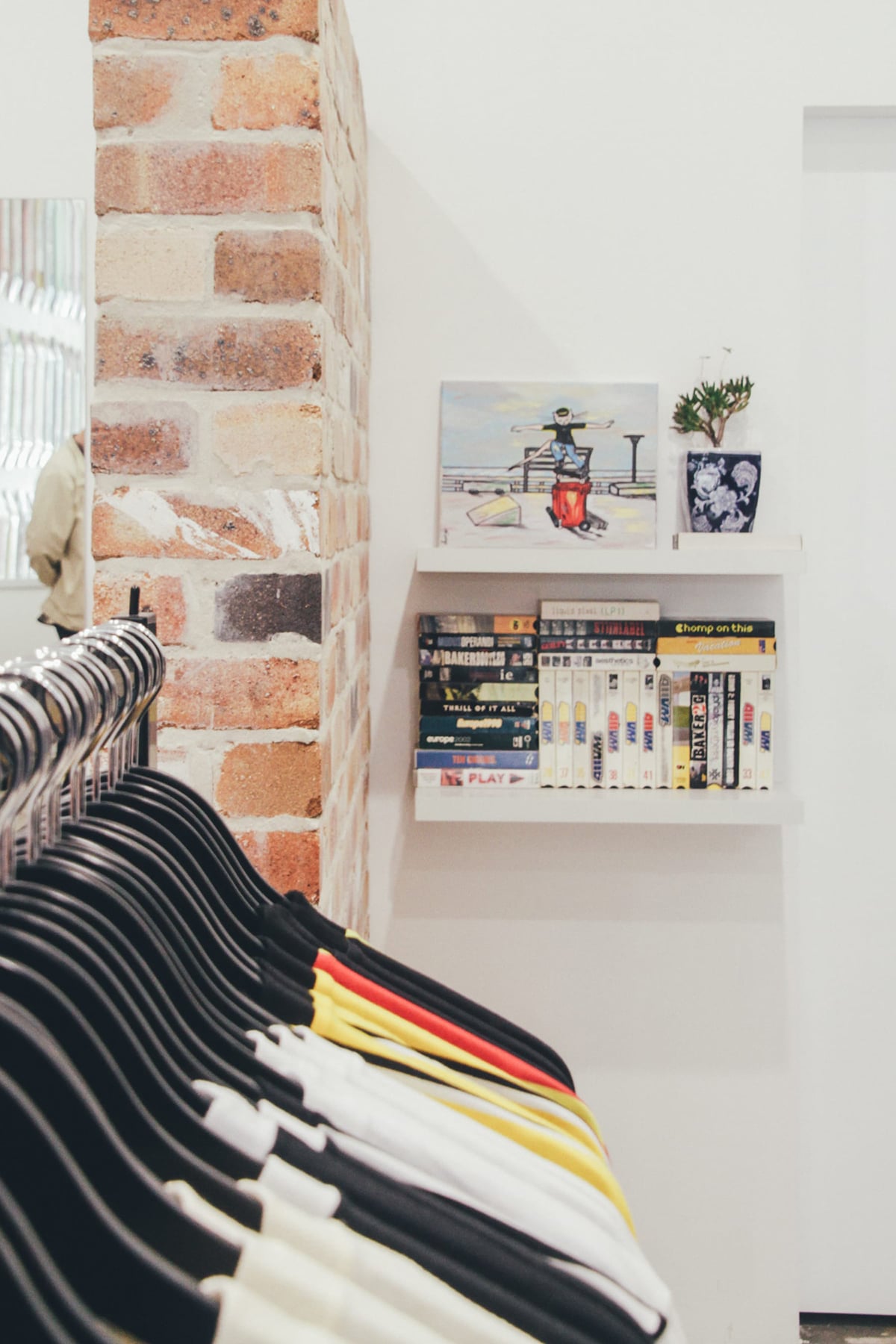 “It was hard to come up with a name that was relevant and appropriate for the space, but so many people still think we’re a coffee shop. They thought our name was latte!

“We’re both, especially me, always late. But it also turns out that it’s both of our initials as well. Laura Alexandra, Adam Tabone, and I guess the e stands for enterprise. It’s honestly, just been a bit of a coincidence.” 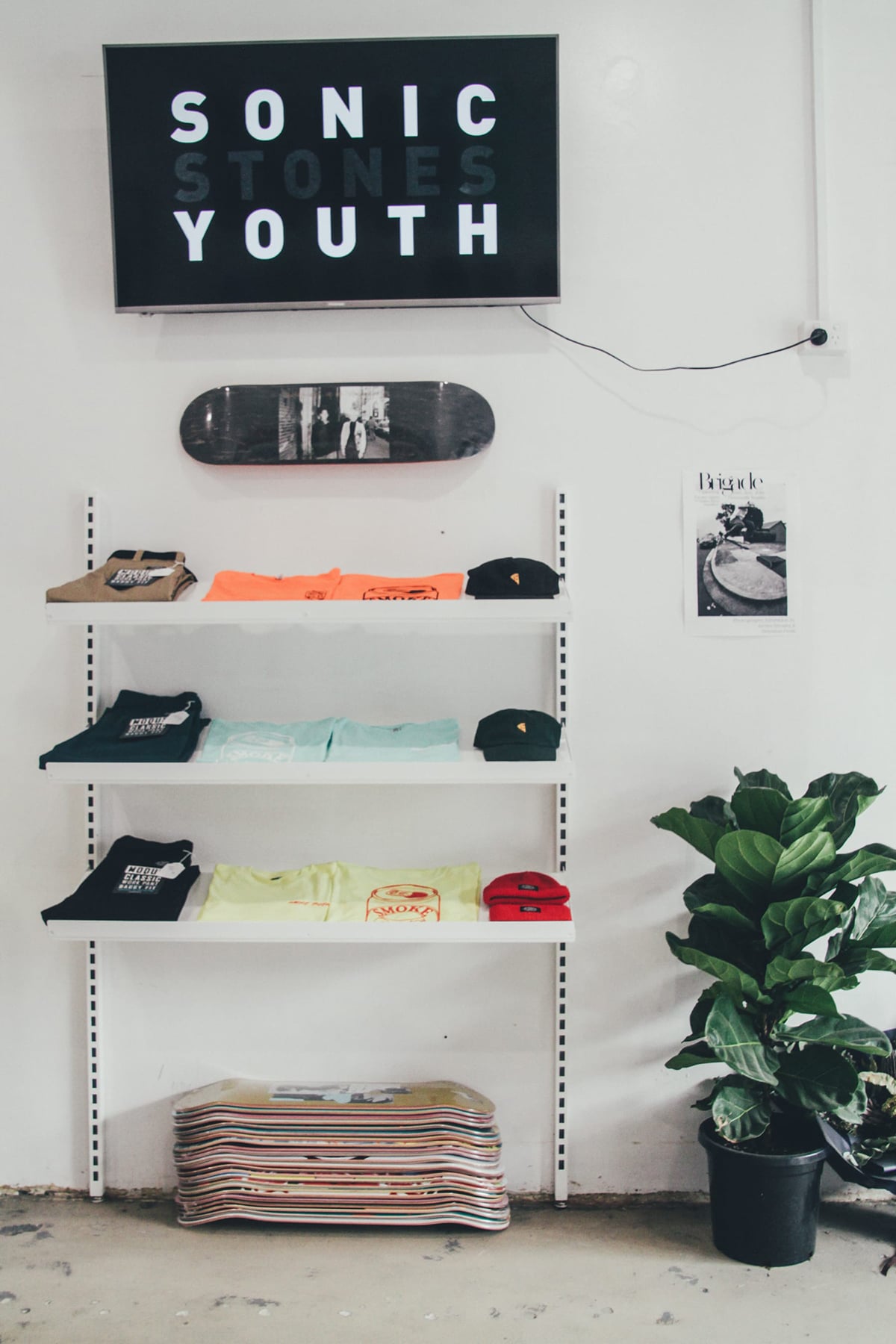 The store really showcases the couples love for skateboarding and art. The pair are keeping the space a community-driven environment by sharing their walls with the people that shop and skate there. Playing a vital role in the store ambiance and ethos; what a great way to be involved with something by actually being a part of it. 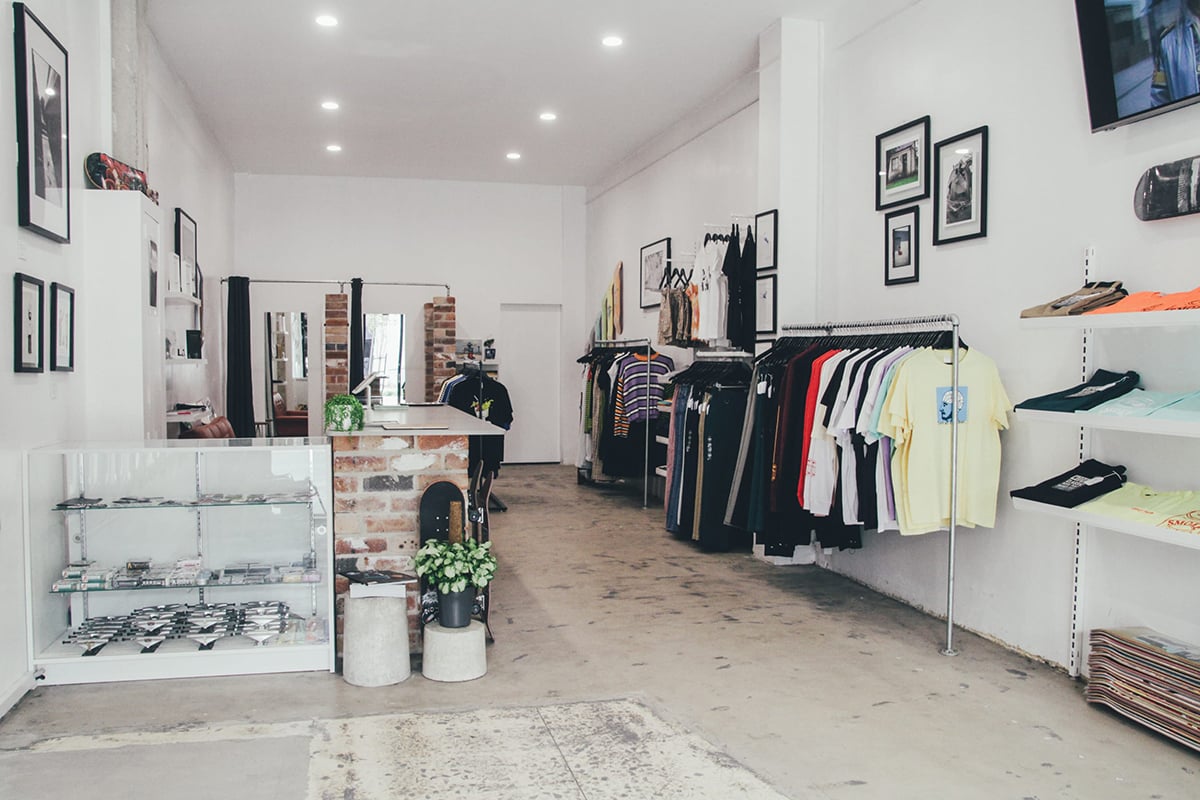 “Our walls are a rotating space for local artists. We’ve had some really good feedback about this so far; people seem really interested in the work that we’re showing.”

Head on in from Wednesdays through to Sundays to check out the skate shop everyone in Newcastle is talking about.