Stationery lovers listen in - our local gurus have only recently launched their brand new space, right in the heart of the brand-new East End Newcastle development.

From humble beginnings back in 2016, Honest Paper was brought to life by two local stationery-loving gals, Bella Cauchi & Gabi Graham. Now, five years on our go-to stationery store has launched its flagship store in the heart of the new East End Newcastle development.

After outgrowing their space in The Junction, the decision was one that can only be described as bittersweet.

“The Junction is filled with some amazing small businesses, and it was hard to say goodbye. It was exactly what we needed at the time, but we’ve always wanted something a bit more boutique. We wanted a street-front with natural light in the city,” Bella shared. 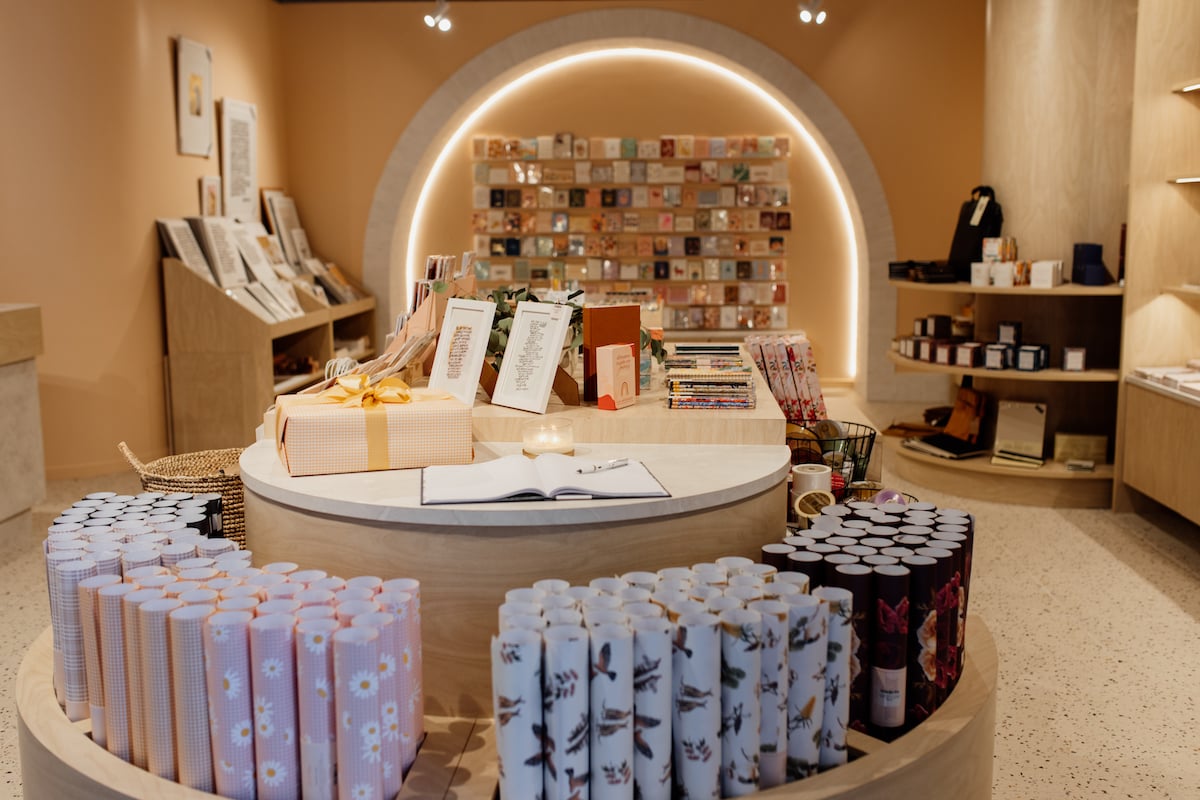 “It was such a good starting platform for us, but we’ve dreamed of this style of shop for a long time,” Gabi said.

Whilst it was clear the girls were keenly looking onwards and upwards, it wasn’t until they connected a group of like-minded business owners, now referred to as, The Collective, that the future for Honest Paper in Newcastle really started coming together. 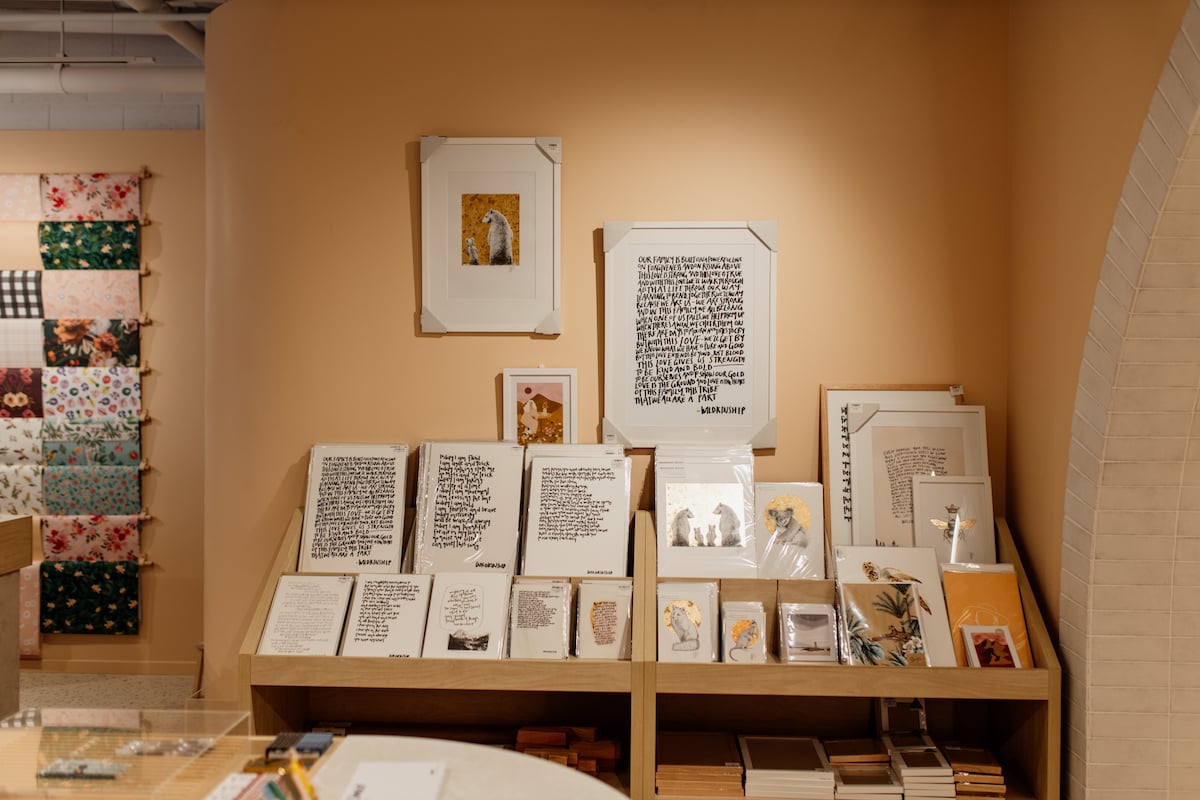 “I was friends with Garth from Mr. Sister, and I popped in to see them at Westfield and they mentioned they were leaving. I said if they’d ever thought of doing a collab space to let me know. Because coffee and stationery go together really nicely.

“Garth had said he was a part of this collective and they’d been hunting for a location for ages and they’d landed on this East End Development. We came through so many times with hard hats. This is going back at least 9 months ago. It was just after the restrictions around COVID has just dropped off and we started the discussion,” Bella said. 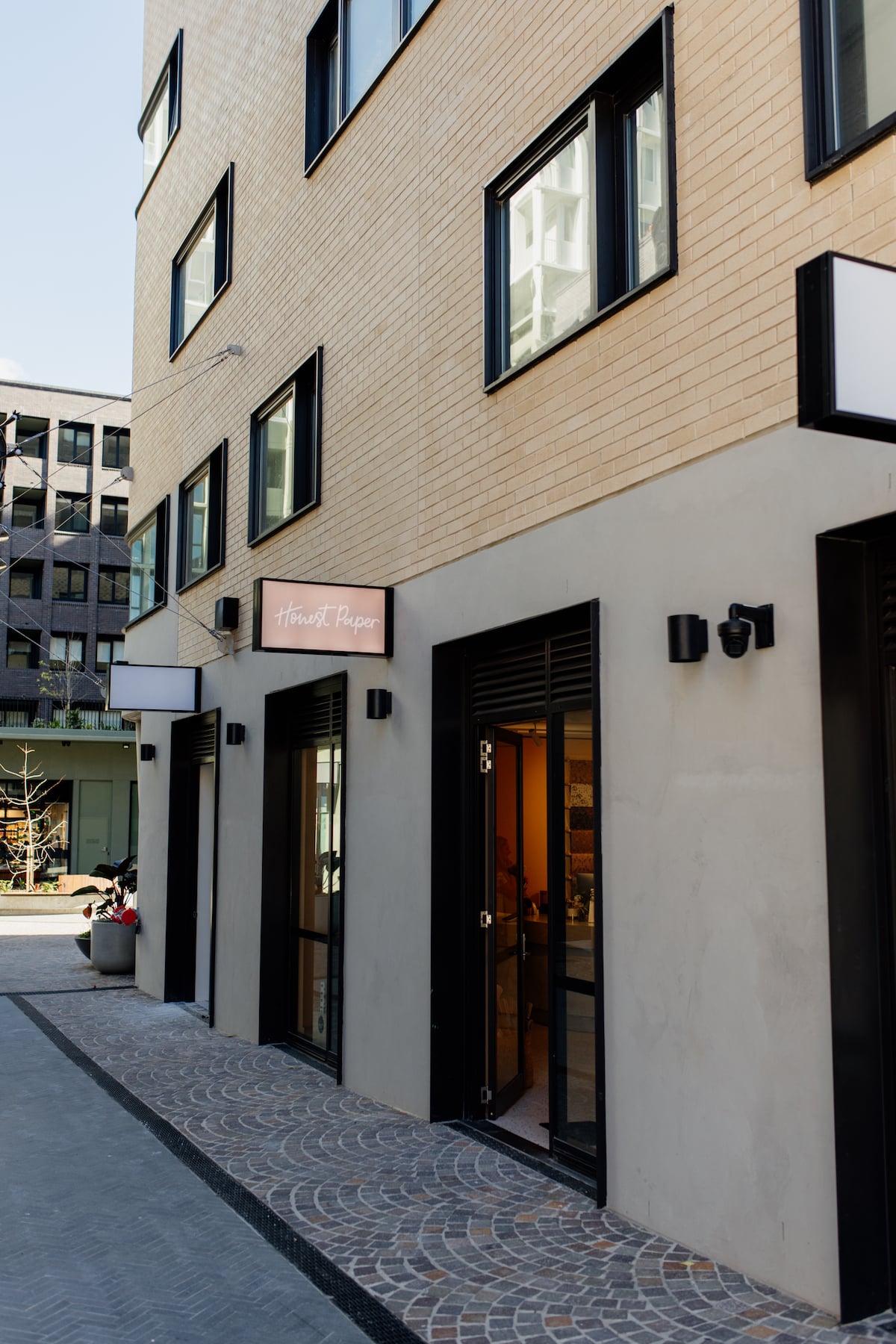 Going back 9 months, The Collective that is Mr. Sister, Honest Paper, High Tea with Mrs. Woo, Studio Melt, and Artisanal Cellars made their way through the construction site time and time again, before finalising their leases and individually getting their hands on the keys to start construction!

“We originally planned to all open at once. But I actually think the way that we’ve done it is so much better. We’re going to have these little gradual boosts as each business opens up!”

For anyone watching Honest Paper on social media in the lead-up to getting their keys, you’ll know the excitement that was coming through on every post. Watching the space come to life through sneak peeks and little construction vids made it all the more exciting to finally see the new space brought to life. 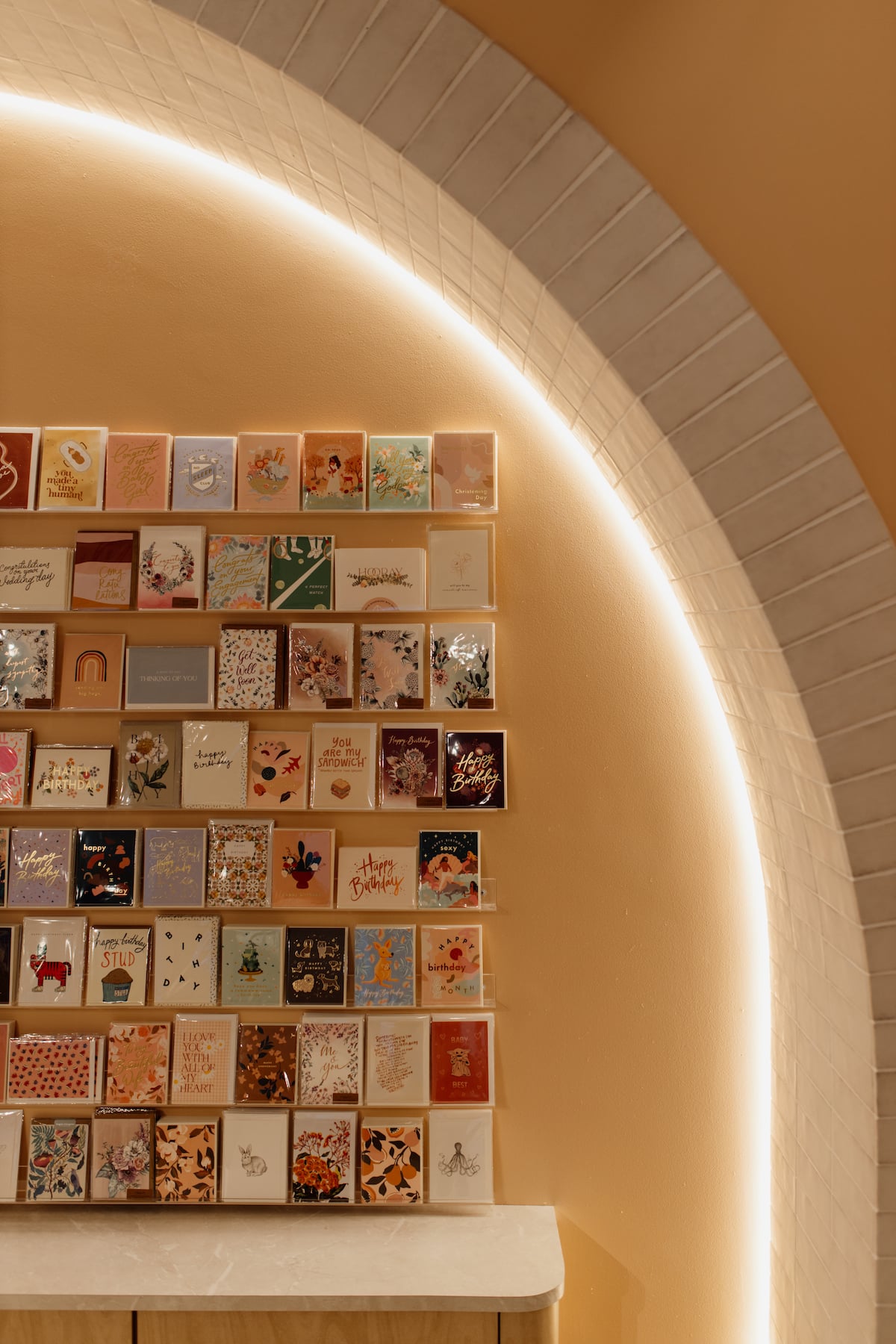 Working with local interior architect, Kaitlin Gordon, and Adrian from After Dark Design, Honest Paper’s new flagship store exudes everything you would expect to see from a specialty stationery store wanting to push the boundaries when it comes to the retail experience. 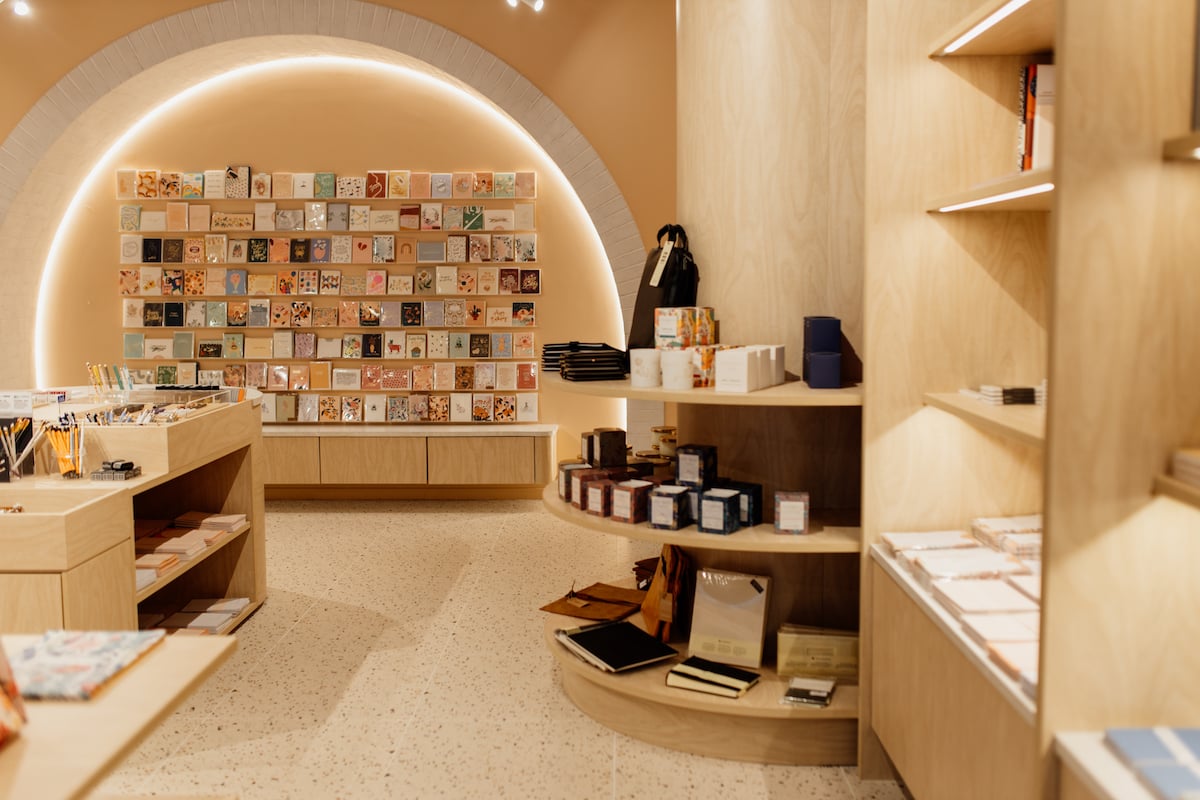 “Kaitlin is actually a friend of ours and designed our first space back when she was a TAFE student. It’s kind of come full circle and we liked the idea of continuing our journey with her designs.

“We gave her our colour palette and the functional requirements of the space, the rest was up to her. She referenced a lot of the local architecture and then Adrian brought it all to life; it’s just been amazing.” 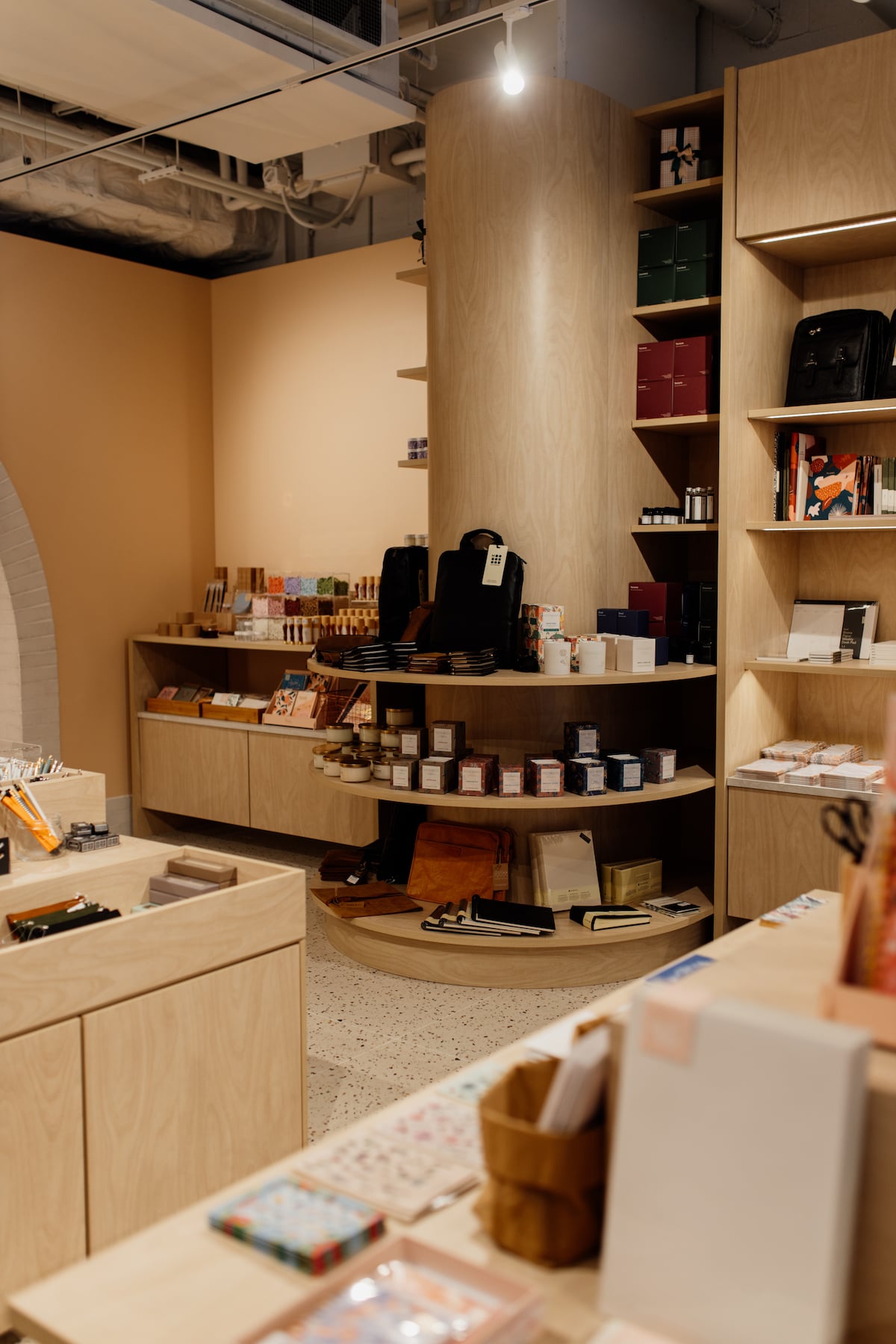 Walking in-store the first thing we noticed outside of the beautiful archway at the rear, was actually the perfect lighting. Designed and planned by Bella’s grandad, David Lewis, who in fact, is the go-to man when it comes to lighting for the Olympic games.

“It has been really exciting after five years of learning about our own stationery shop, to create a space that was custom-built for us,” Gabi said.

Officially opening up on Saturday the 8th of May, the girls were zipping around at the 11th hour to make sure the t’s were crossed and the i’s dotted!

“I don’t think we took a breath all day. It was fuelled by coffee and no sleep because we had been here late the day before. Gabi was here until 1am loading all of the shelves, but that’s small business; you do everything,” Bella said. 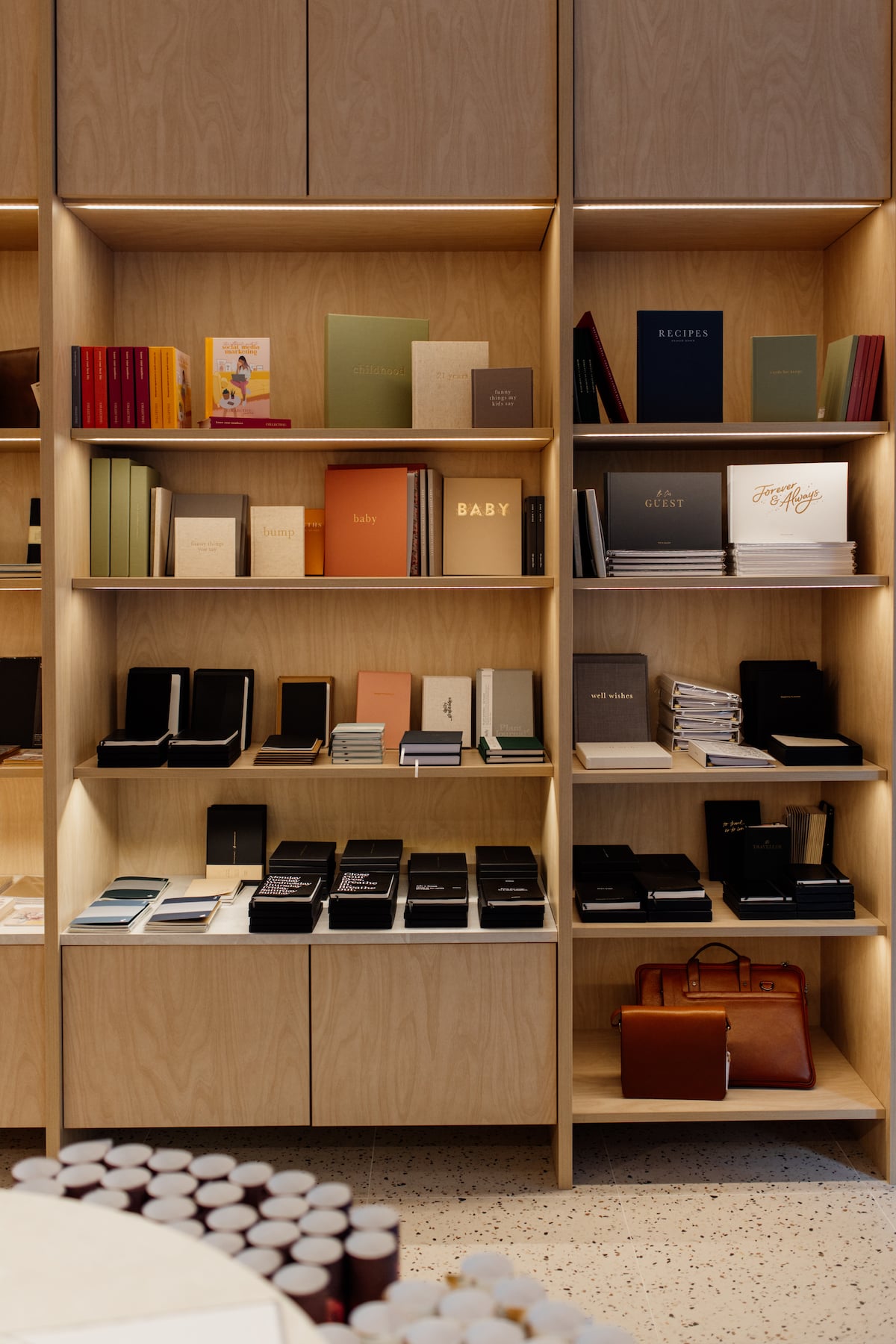 In addition to their usual goods you would expect to see at The Junction space, Honest Paper has launched an Australian first dedicated wax seal bar. Working with Melbourne-based brand, Sea & Paper, the wax seal bar is so much fun (and rather addictive).

“Wax sealing is coming back, it’s a modern take on it and it’s really easy. Basically, once you start, you’ll feel the need to seal everything, you literally desire it. We’re stoked to have that in here, and people can pick and mix their own wax colours.” 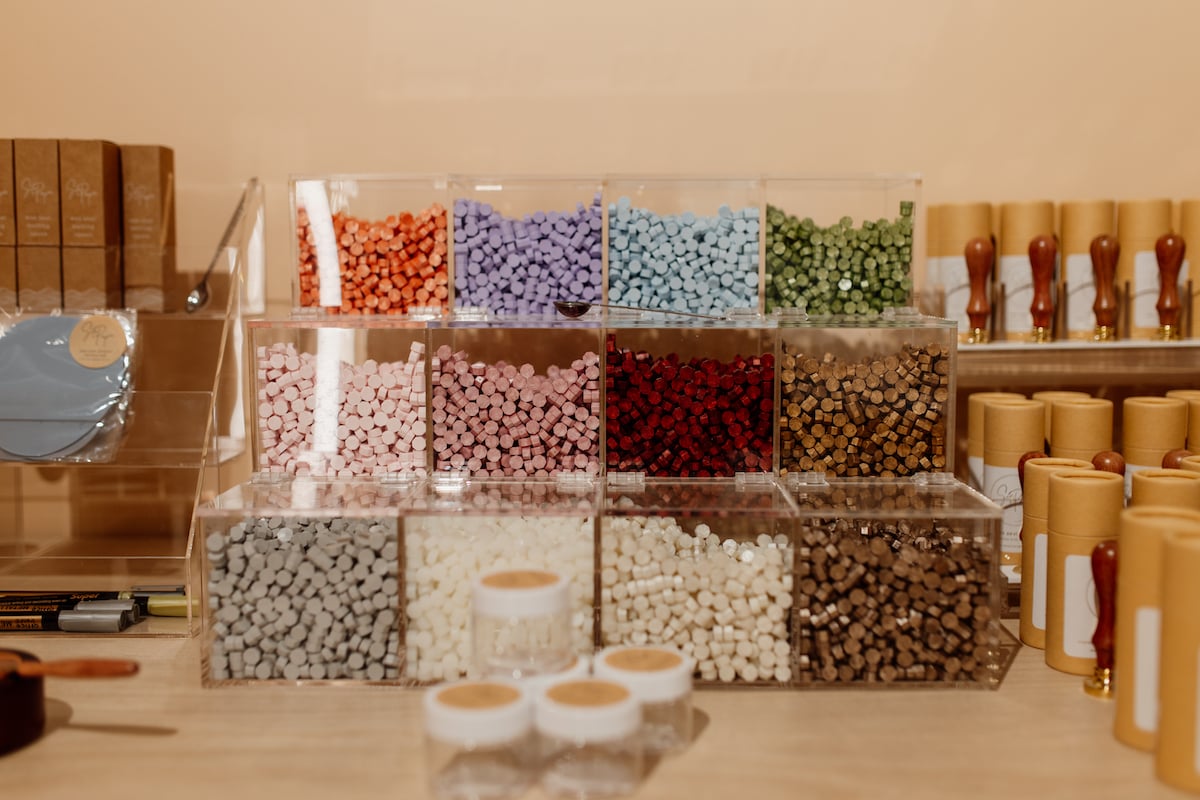 The girls have also really leaned into the realm of fountain pens with a custom-made pen area, where shoppers are encouraged to test the pens out for themselves. The journal and paper range has grown significantly now as well, with the new space allowing Honest Paper to be the home for literally all of your stationery needs.

“There’s been a number of brands that we wanted to bring in that we just didn’t have the room for before. But now we do,” Gabi said. 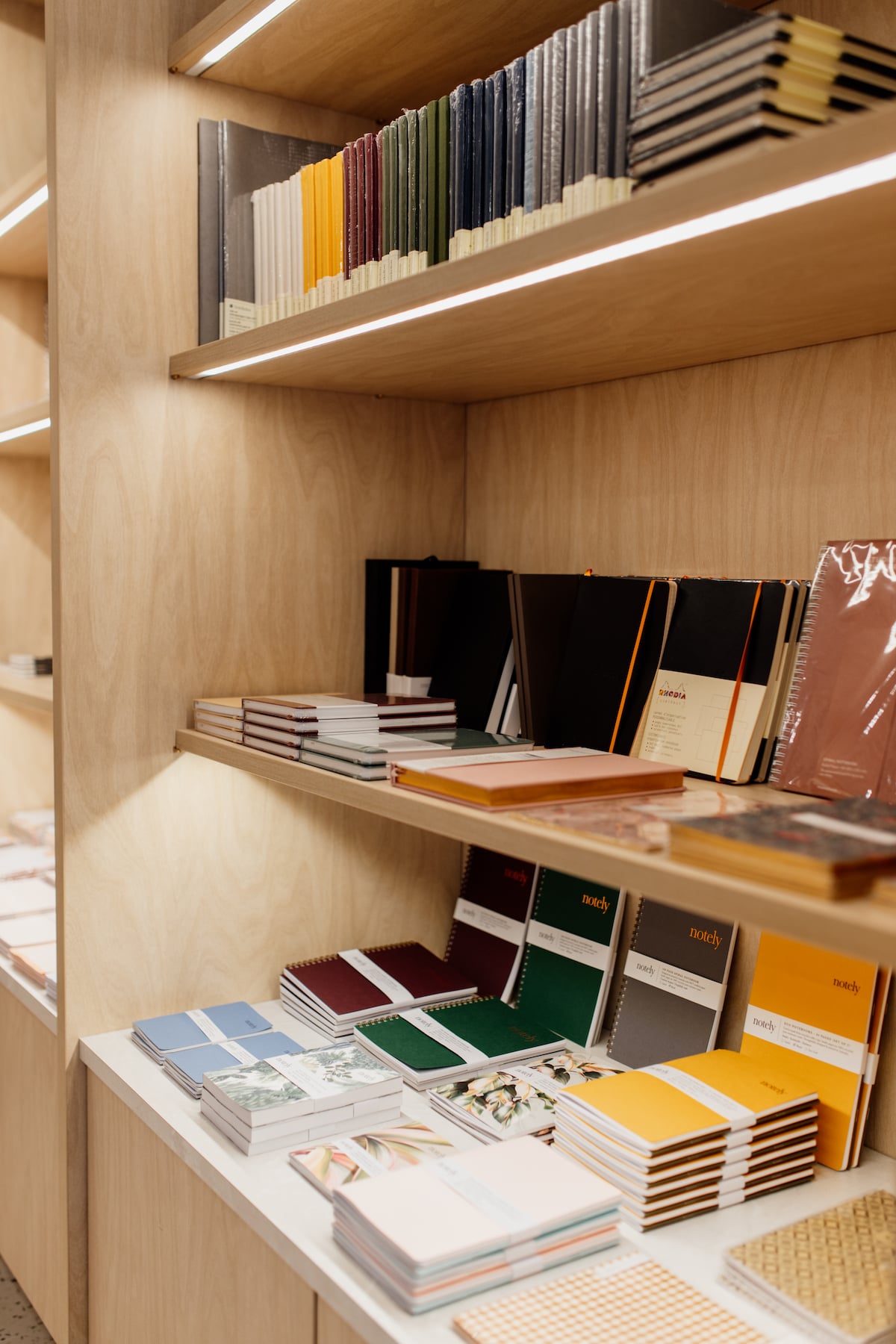 Bringing the new space to life has been one big job for the girls and their extended team, and they are really excited to lean into building this space and settling into their new local area.

“I think if we were to ever do another one, it would be far enough away like New Zealand. We really like the idea of having a space that is worth travelling to. You come through Newcastle you’ve got to go to the stationery shop. It’s like nothing you’ve ever seen before.” 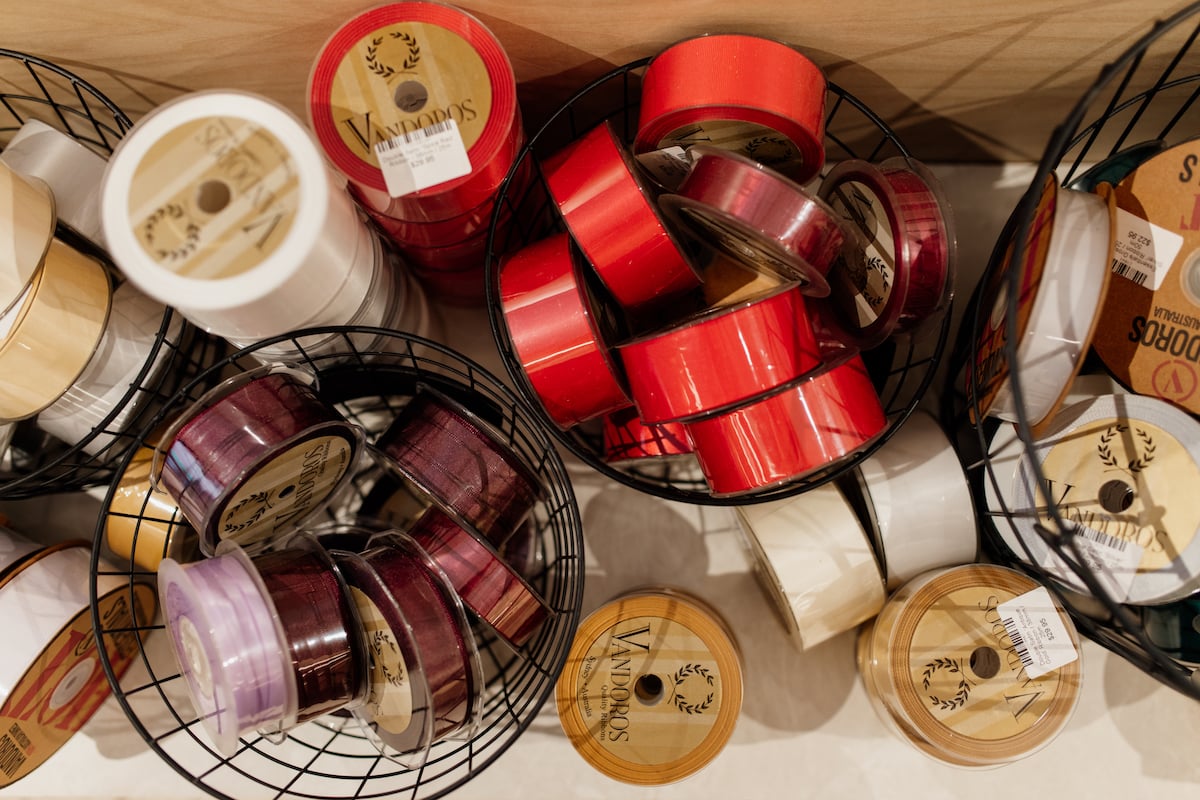 For now, Bella and Gabi are focussing on continuing to curate the Honest Paper range and working with the brands they know, love, and connect with their own personal philosophy. The pair are also planning on spending more time building on their own products, so Honest Paper fans watch this space!

“Ultimately, we’re trying to make this store more interactive. People can play with the pens, try the pens, look through the books; we want to give people something they can’t access online. To come in and really experience the shop.” 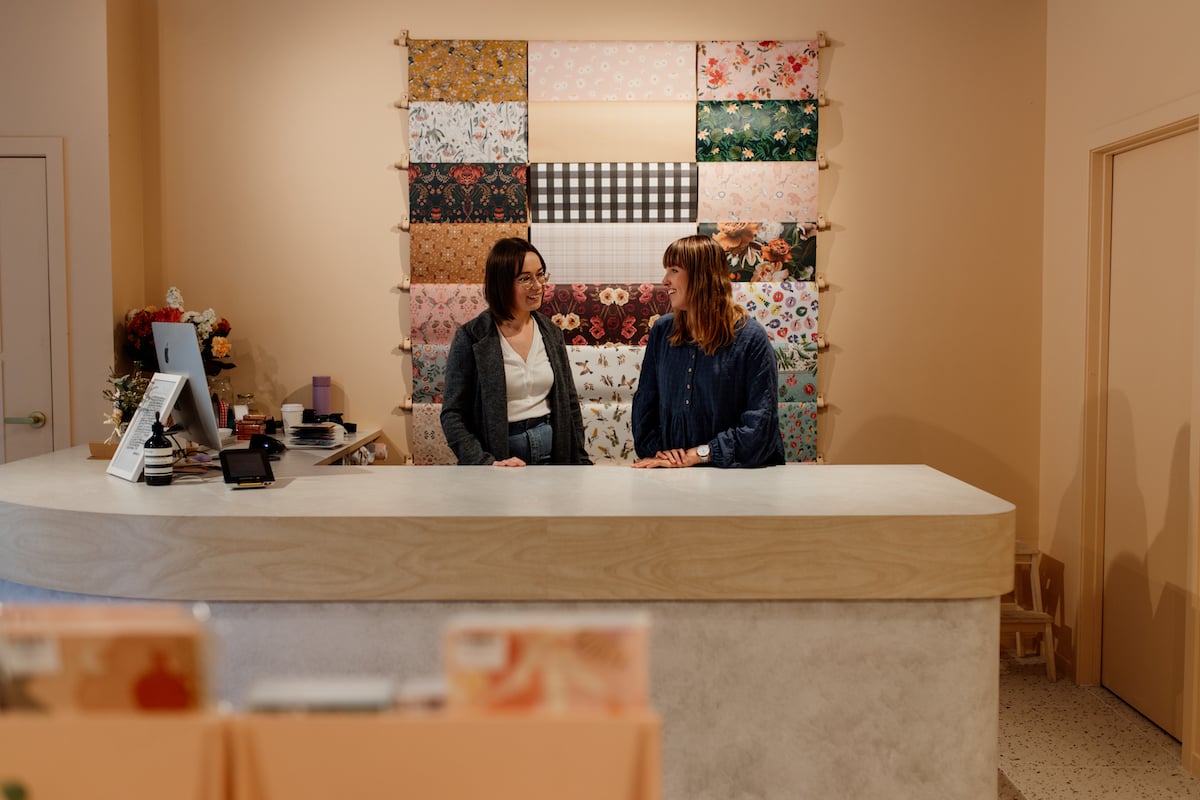 As always, the team at Honest Paper are continuing their commitment to supporting small Australian brands & local artists as well as stocking more well-known stationery brands such as Lamy and Rifle Paper Co. 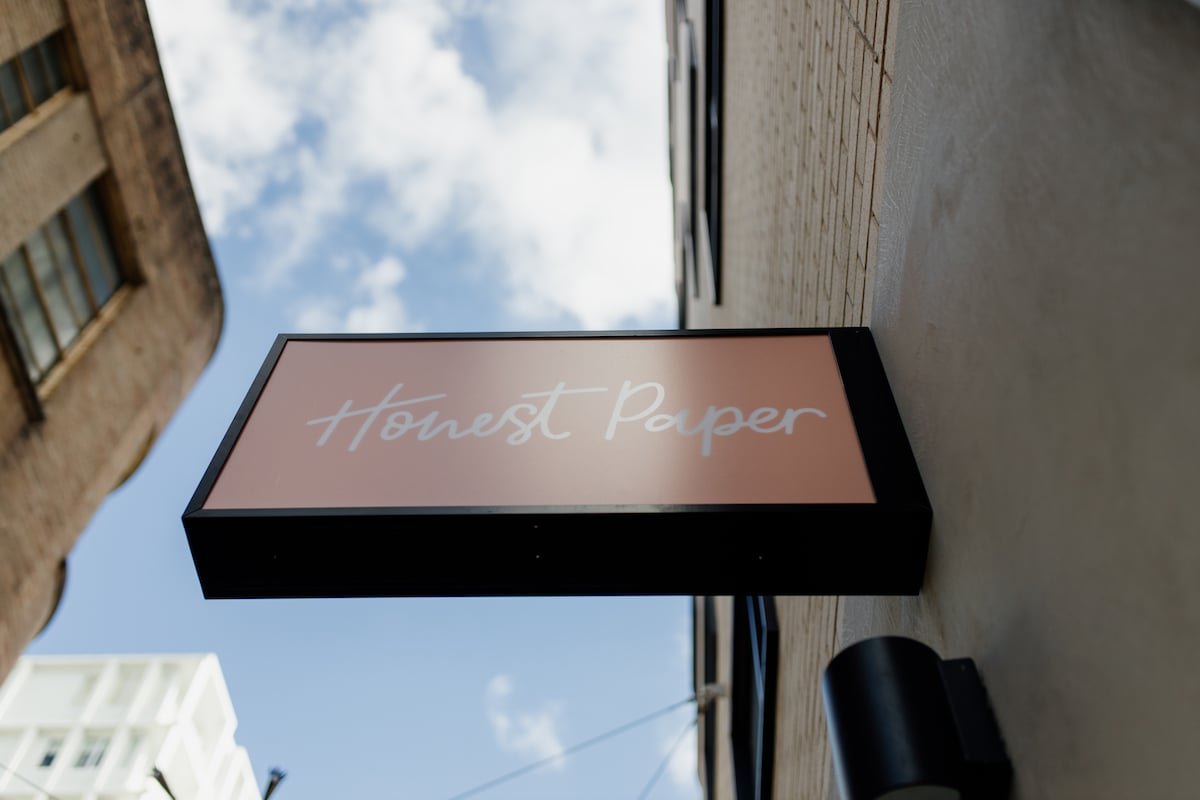 The place so nice they named it twice

The place for coffee & eats on the Hunter Street Mall