We’ve been counting down the days until the internationally renowned street art festival; Big Picture Fest finally comes to town this October. Whilst it’s still a little while away, we’ve got one bit of news worth talking about; the first Artist announcement!

Whilst we have the low-down on the first round of artists we can expect to see working their magic on the walls of Newcastle, we thought we would take this opportunity to catch up with two of our local artists; Tom Henderson and Patricia Van Lubeck, to hear about how they’ll be bringing their own style to Newcastle’s Big Picture Fest.

Originally from up the North Coast in the seaside suburb of Valla Beach, Tom moved to Newcastle to pursue a graphic design degree at the University of Newcastle.

Over the past few years, Tom has worked alongside Brett Piva from Pocket Design as a mural assistant on large scale outdoor projects all around NSW, as well as completing office suite mural transformations solo and collaborating with Brett on the 17m in-house feature mural at Onwards Studio. 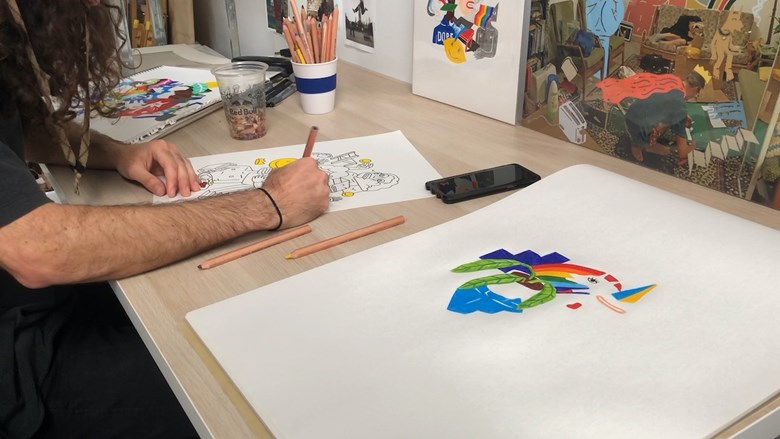 How would you describe your style of work and what you are influenced by?

“My work is illustrative, bold, somewhat abstract and often needs a second glance to work out how all the elements are pieced together. I’ve tried to be pretty insular in the development of my style but people sometimes draw comparisons to the linework of Reg Mombassa and the Mambo aesthetic.

“My art practice has been shaped, supported, challenged and developed by Newcastle. To have my chance to leave my mark on the city that has been so integral to my creative journey is really important to me on both a personal and professional level.” 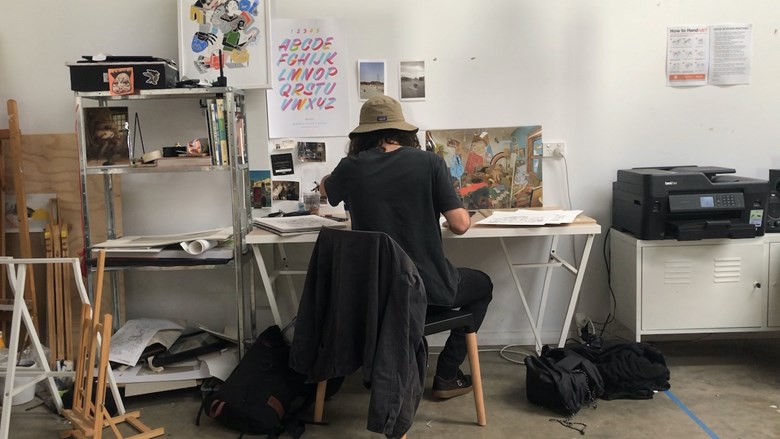 How do you feel about getting to work alongside some amazing Australian artists to add more life to Newcastle’s creative scene as part of the Big Picture Fest?

“It’s awesome. It’s what I’ve been tinkering away for and striving towards these last few years. Sharing the stage with some renowned artists feels good.”

What can we expect to see from you over the festival dates?

“I want it to be a piece that people stop and say, ‘ah, that’s definitely a Tom Henderson,’ it’s going to be in my style so think bright colours, pot plants and a bit of visual trickery.”

Originally hailing from the Netherlands, Patricia Van Lubeck spent eleven years in New Zealand before moving to Newcastle only three years ago.

“After a while living in New Zealand my (also Dutch) husband and I started to miss the big citiies. New Zeland turned out to be a bit too ‘rural’ for us. Also, most of my art went overseas, so it was logical to move myself to a nearby big city. Newcastle was an obvious choice and we lived in Mayfield for a while, but some how we ended up in Maitland. Everything is still close by, and we love the fact there is public transport.”

The self-taught artist already has her works sprawled across Maitland with the Bourke Street mural in the Levee and Bob’s Bird Barn.

“I just love the experience of working in the public space. Getting direct feedback from an audience is quite different from working in my studio in solitude. Murals are a great way to expose a larger audience to art in general and Newcastle has so many good locations to do that.”

How would you describe the style of your work?

What can we expect to see you create during the Big Picture Fest?

“The landscapes I paint have quite intense colours and feel very much at home on a big wall. And the larger scale of the work makes you almost experience like you are walking into another dimension.”

Both Patricia and Tom, alongside Sophia Flegg, were selected to take part in the first Big Picture Fest through an expression of interest process for local up-and-coming artists. The festival’s presenters, Newcastle Afoot and The City of Newcastle are pretty excited that the selected artists will join another six other painters from the area in a line up which is especially homegrown.

“That nine of the 13 artists chosen live in the Newcastle area is testament to the calibre of our homegrown talent. These artists have been given an incredible opportunity to work alongside some of the biggest names in Australia.

“City of Newcastle is proud to be a major supporter of The Big Picture Festival and looks forward to welcoming this fantastic event to the City as our rich arts and cultural scene rebuilds in the wake of COVID-19,” Nuatali Nelmes, Lord Mayor City of Newcastle shared.