When Sophia inadvertently came across her Newcastle East apartment for sale in 2018 she knew it was an opportunity not to be missed.

“I was renting an apartment in Hunter Street and searching online for a new place to rent. I had accidentally searched ‘to buy’ instead of ‘to rent’ and this place came up. When I looked at the mortgage calculator, I realised it was about the same cost as renting so I went for it.”

Sophia’s top floor 1960’s apartment is located just one block from the beach, with Newcastle Beach on one side and Newcastle Ocean Baths on the other. 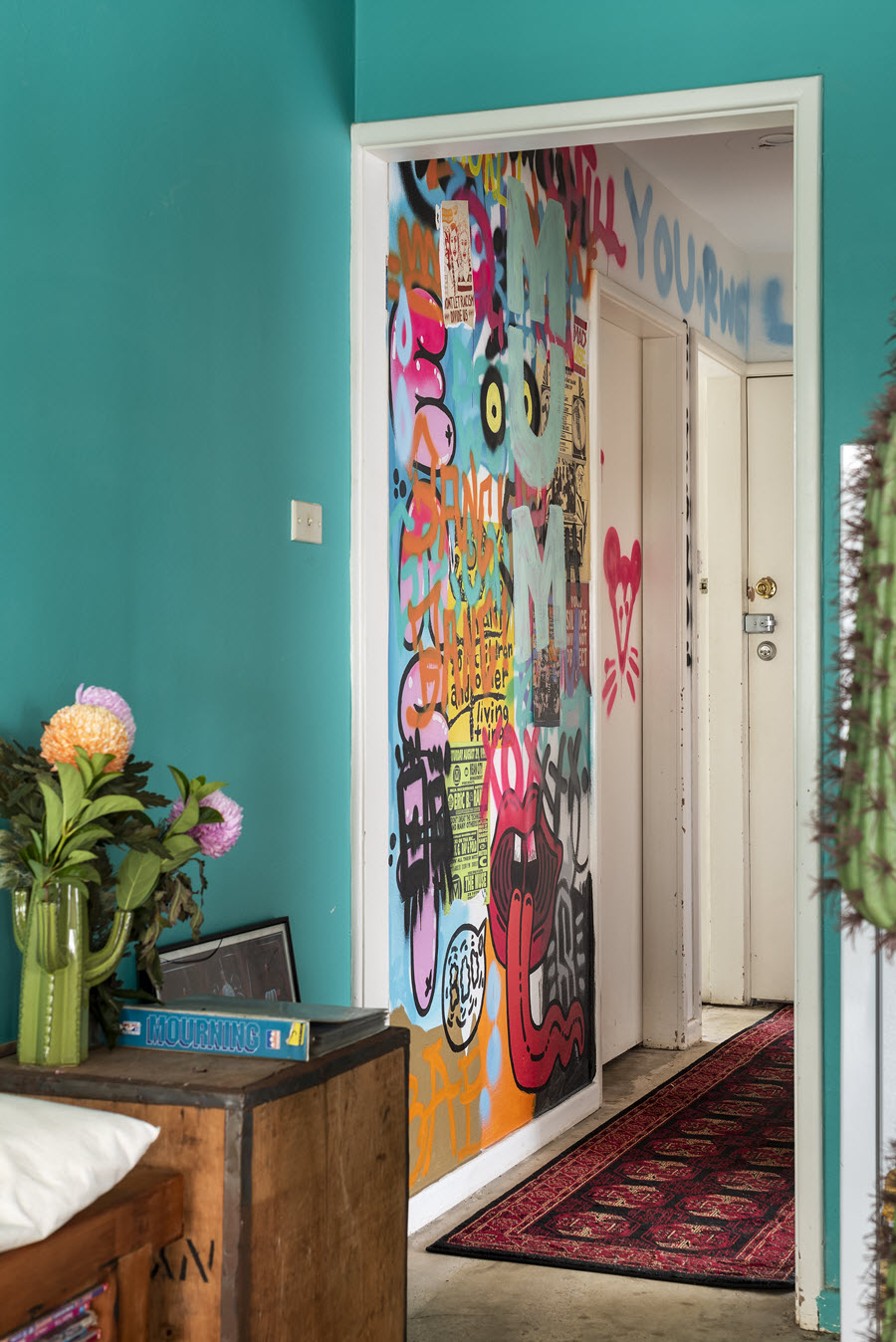 What was the apartment like when you first saw it?

“It was filled with the ghosts of a hundred grandmas past! The walls were a peachy beige colour, the paint was peeling and the carpets, which I’m guessing were originally white, had turned browny/grey.”

What was your vision for the apartment?

” I wanted to make it as warehousy as possible. I’m also massively into the hip hop culture, especially the 90s and early 2000s so that was always going to feature heavily in my design. I also wanted a space where I could maximise the space for when my friends come over. I do a big cook up every month and I really wanted to create a communal space.”

How would you describe your style? 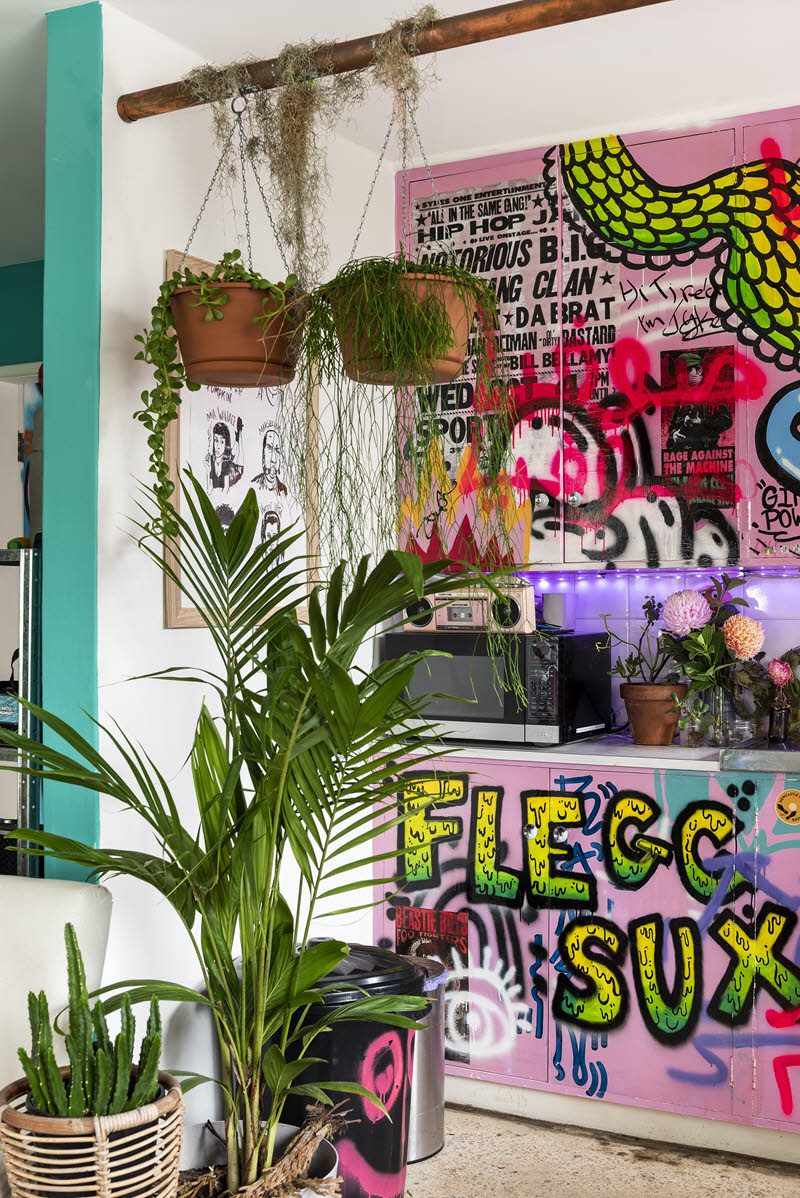 You’ve created a space which is a massive reflection of you. How did you achieve such a drastic make over in just 5 days?

“When I bought the place, I took 5 days off work and a bunch of my mates and my Dad jumped on board to help me. This is the first place I’ve bought so that’s why I’ve gone a bit turbo! I feel like after renting for so many years and not even being able to hang a picture up, I really wanted to make it mine. The first thing we did was rip up the carpet. When we pulled it up we found lots of glue and goat hair underneath which was almost impossible to shift”.

Sophia expands, “We tried everything, even oven cleaner! Then one of my mates suggested a method he’d used once before. We made up a mix of Pepsi and LA Ice and within 5 minutes it came up with just a paint scraper. It was concrete underneath and I didn’t have the budget to polish the floors, so we sanded it all back and now I have this incredible concrete floor with riverstone through it.”

Much of the transformation has come about with the use of striking graffiti style murals, all painted by Sophia in her distinctive, bold and flamboyant style. 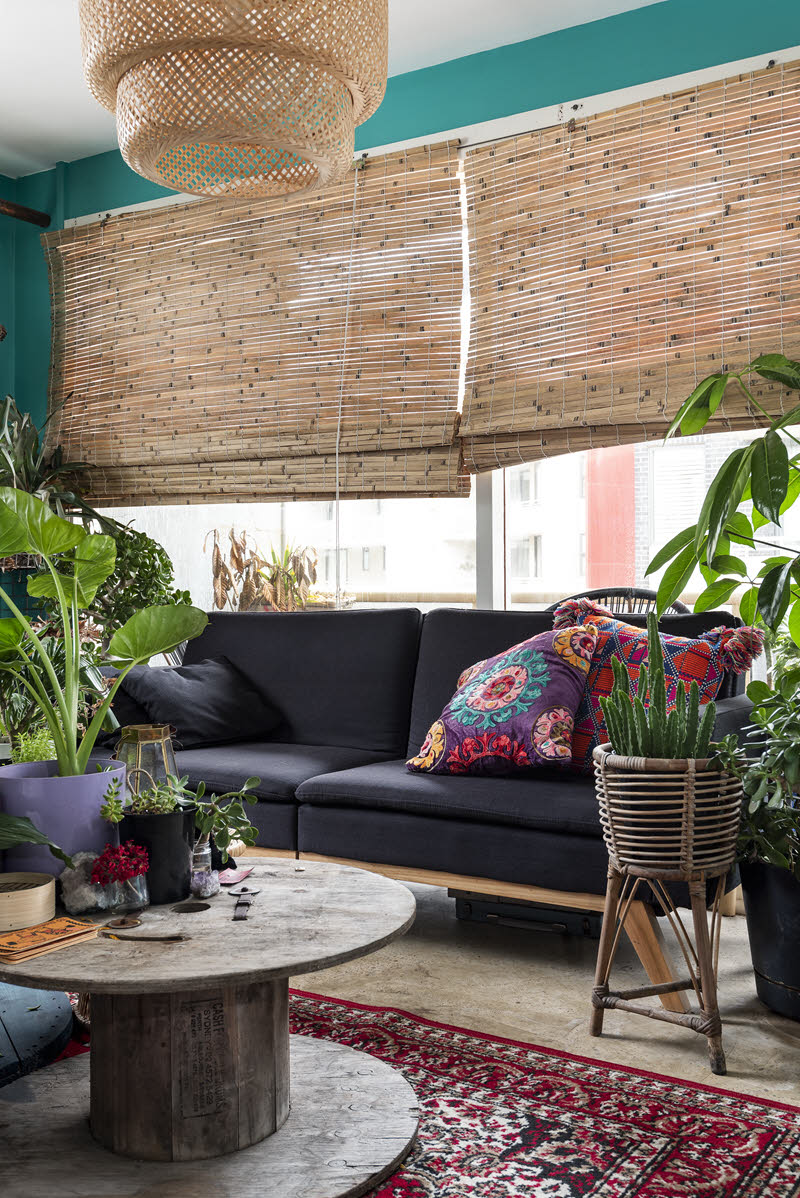 “When I saw the place initially I thought it would look sick with graffiti. I was never going to replace the kitchen because it just wasn’t in the budget. When I started painting the cabinetry with a pink base I was worried it was starting to look like a clown house. I’d used Bollywood Jade on the walls which is a colour I use a lot in my art. Once I’d added the layers of graffiti, it all came together exactly how I’d envisioned it.”

Sophia has successfully brought the outside in, with an impressive collection of plants throughout her home.

“My friend bought me a plant for a housewarming present and that’s where it started. Since then I’ve been collecting plants from markets and I’ve also started propagating my own plants. Because I’ve mostly lived in houses I’ve not really needed so many house plants. My last place was an apartment on Hunter Street with no balcony which was really hard. I really wanted to bring the outside in as much as possible. I thought it would be cool to hang some plants as well so my Dad, whose a plumber, gave me some copper piping which we’ve used to hang more plants from. Being so close to the beach, I’ve lost some plants due to the salt air so it’s been a bit hit and miss.” 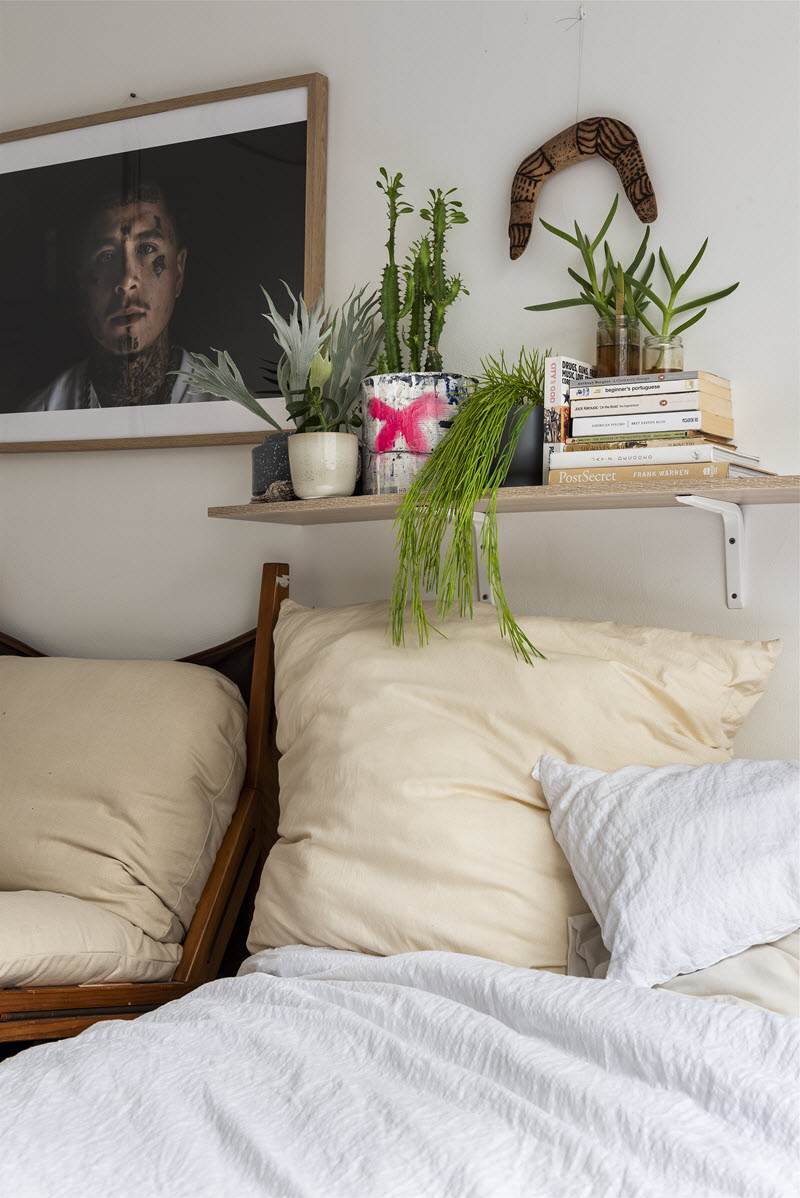 You did all of this with a $5k budget. Where did you source your furniture?

“I turfed everything when I moved out of my last place. My Dad’s really handy and he made the bench seat which doubles as storage for my book collection. My lounges came from Fantastic Furniture and they double as futons for when I have friends stay. My bed pulls apart and can be configured in multiple ways to form seating so that means I can use my bedroom as a living space as well. I’ve used a couple of electrical cable spools as coffee tables. One came from Dad’s work and the other one I snapped up for $10 at Bid Barn in Wickham which is a silent auction centre. I also got the metal cage in the corner for $20 from Bid Barn which I use for my plants. The blinds in the lounge room were $20 from Bunnings and I picked up a couple of tea chests from the markets for $10each.” 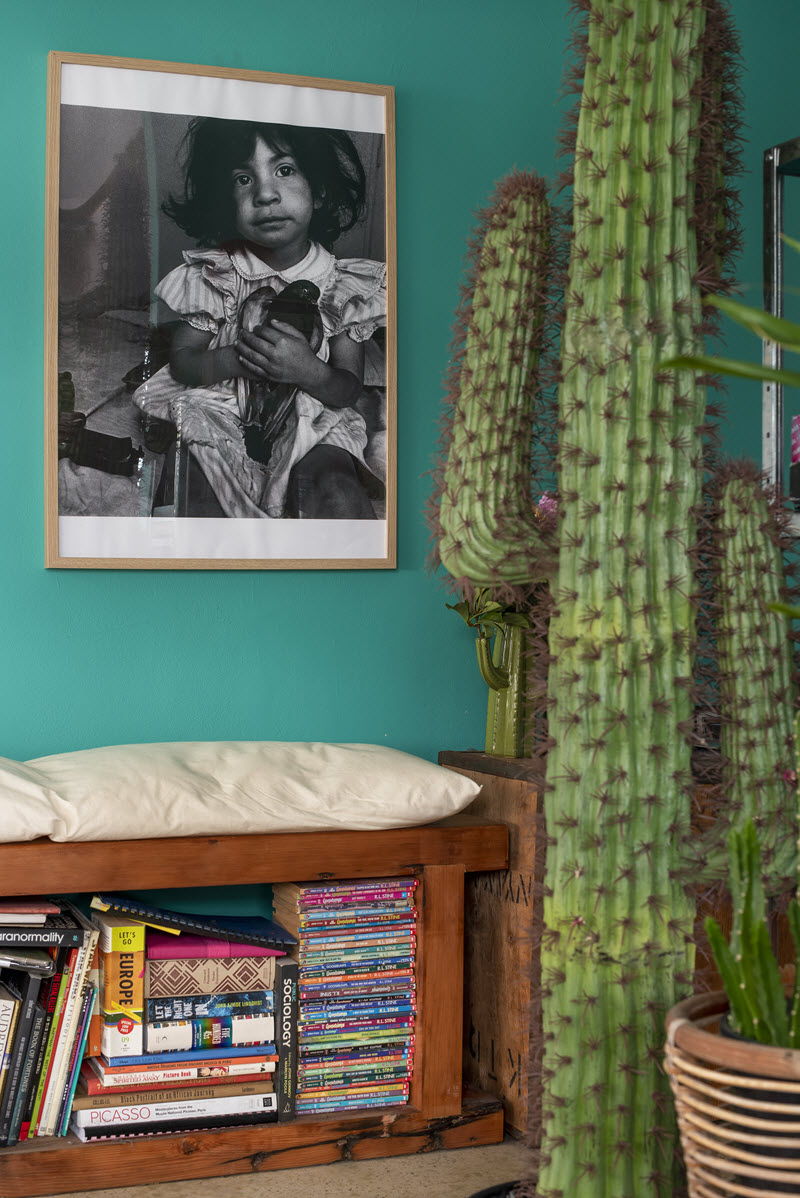 From the hallway, to the living room, to the kitchen, Sophia’s home is a visual feast. You could easily spend a day there and continue to find more to see. The graffiti in the kitchen has been personalised with friends’ tags; the graffiti in the hallway includes nods to Sophia’s loves, including her dog, Whiskey; and the 1960’s black and white Mexican portrait photography in the living room is a subtle contrast to the adjacent explosion of colour. The biggest contrast, however, is the peaceful retreat that is Sophia’s bedroom. Using a palette of white, there is a sense of peace and calm. A simple shelf running above the head of the bed is home to more plants and books. The only addition of colour in this room is a playful, bright pink ‘x’ sprayed on a plant pot.

Is the apartment looking how you imagined it would when you first saw it?

“Oh totally. I’m actually really surprised because in my head I’m like this could look really rad. When I got the living room rug in the mail I was like oh I don’t know about this, I think it could be a bit too much. Now with everything thrown in together I’m like no, the vision’s working.” 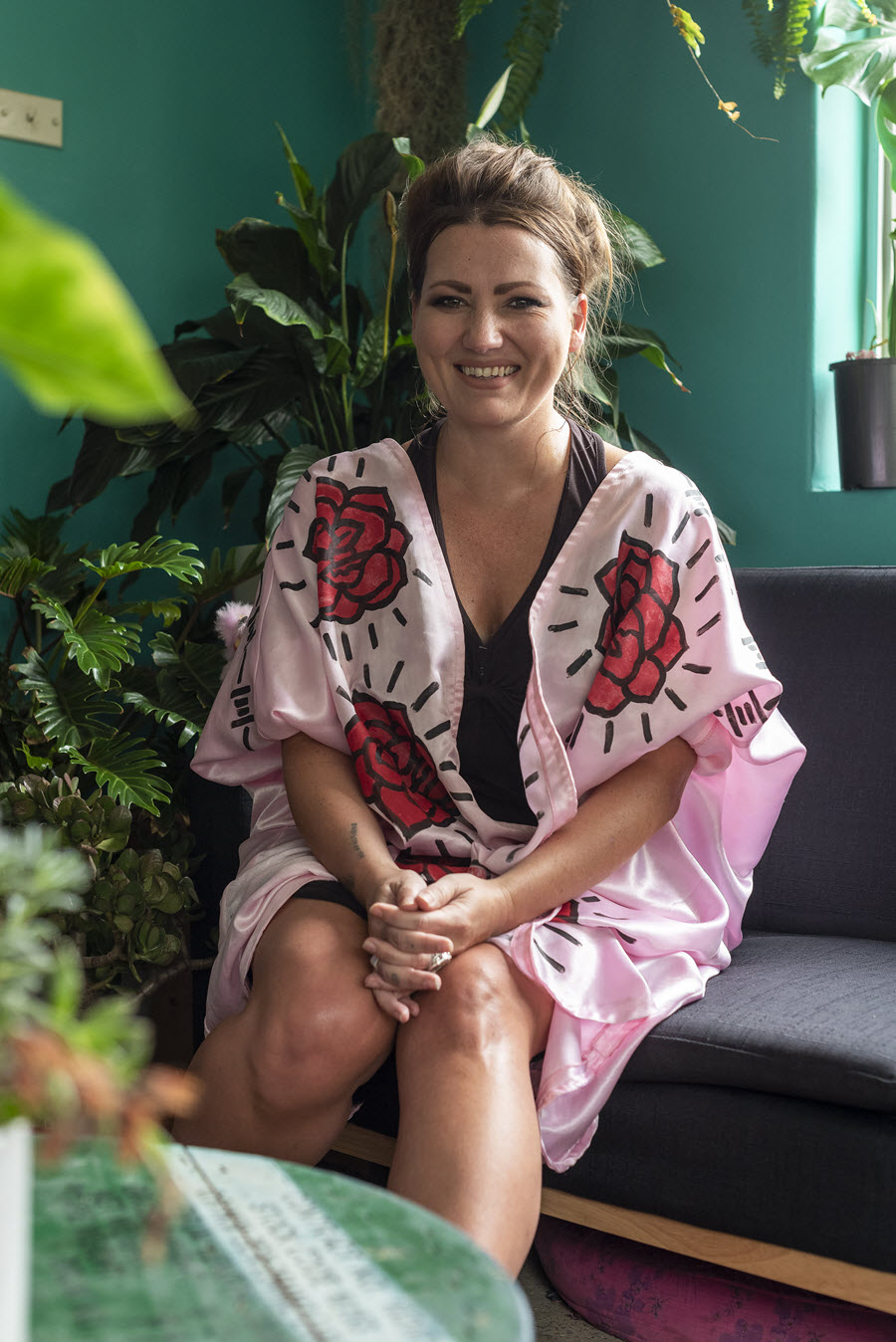 “I spend a lot of time outside on the balcony so I’m planning on putting an L shaped bench out there. Eventually I want to expose some of the brick in the hallway so that when you come through the front door it looks kind of like you’re walking into a squat. I’d also like to add brass wall pockets so I can have plants coming out of the wall. I’d ultimately like to put a loft bed in the spare bedroom so I can use that space as my studio.”

Sophia is currently planning her next exhibition in Newcastle. Follow her on insta @6_ghosts to see her amazing work and to be the first to find about her exhibitions.

Want your home featured in House Proud? or do you know of a beautiful home that is in need of sharing? To be considered please contact our House Proud Editor, Julie Kosy for more details at - houseproud@hunterhunter.com.au