That’s right, Darby St does it again with the American-style hot wings and beer joint, Wings & Tins officially opening up. Sydney’s favourite dive bar has headed north and it’s just as unique as their Darlinghurst and Dee Why venues. 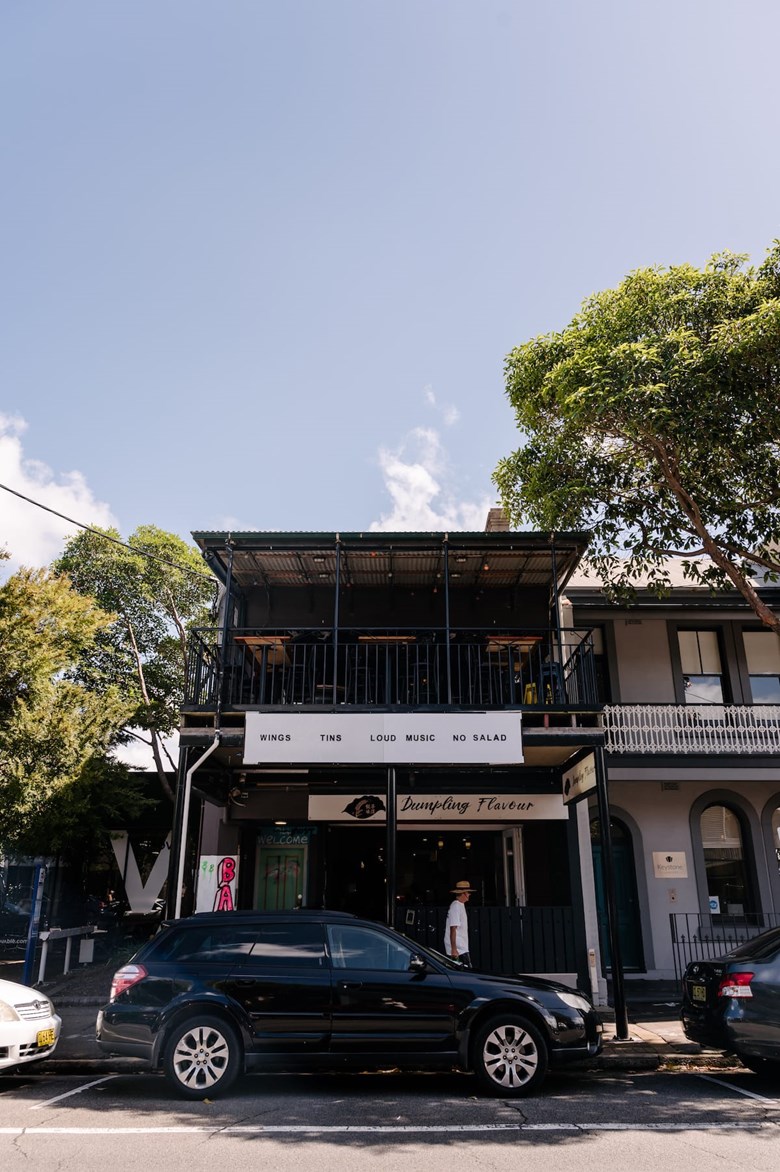 Keen chicken wing enthusiasts will be flocking to this absolute one-of-a-kind joint first to try the wings but will come back time after time to experience it all over again. Why? Because trust us when we say that no visit is the same as the last. 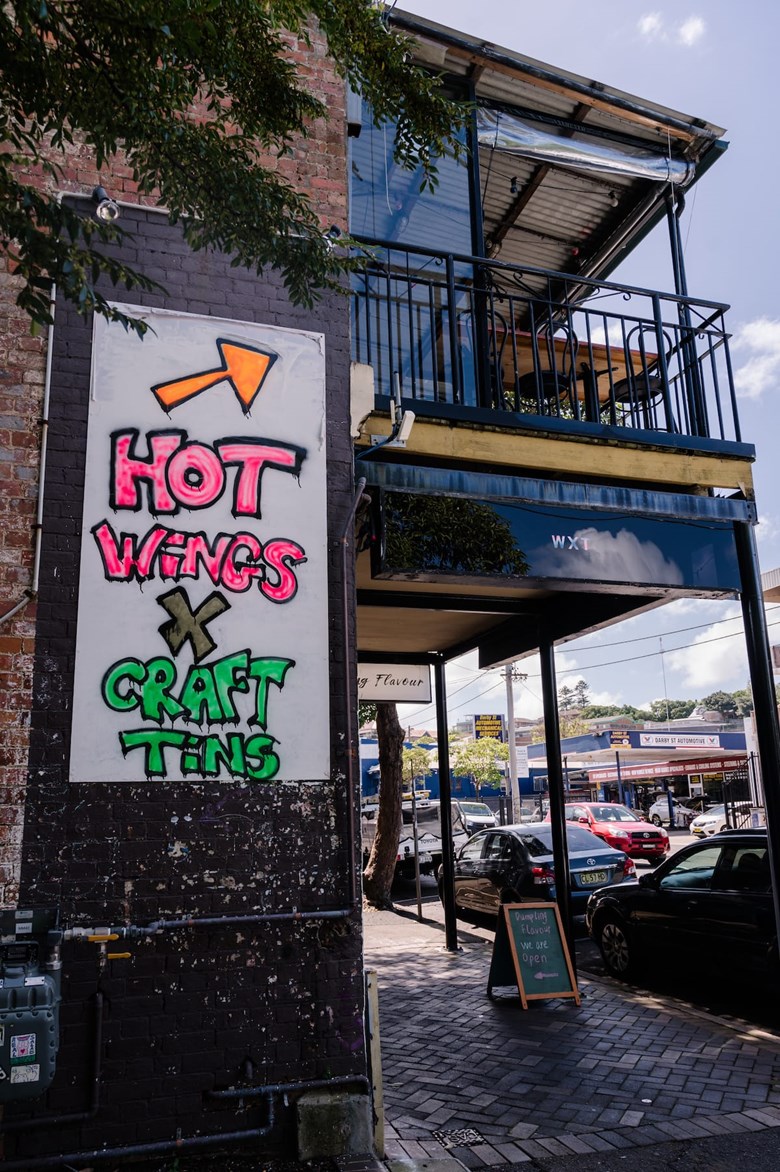 “Alfie’s family had a little wings shop in Mexico, so he was pretty familiar with the wing world. The two of them were travelling throughout Mexico and the States before coming back to Australia. At the time, burgers were really going off here in Australia. They noticed that no one was really doing wings,” Kevin shared. 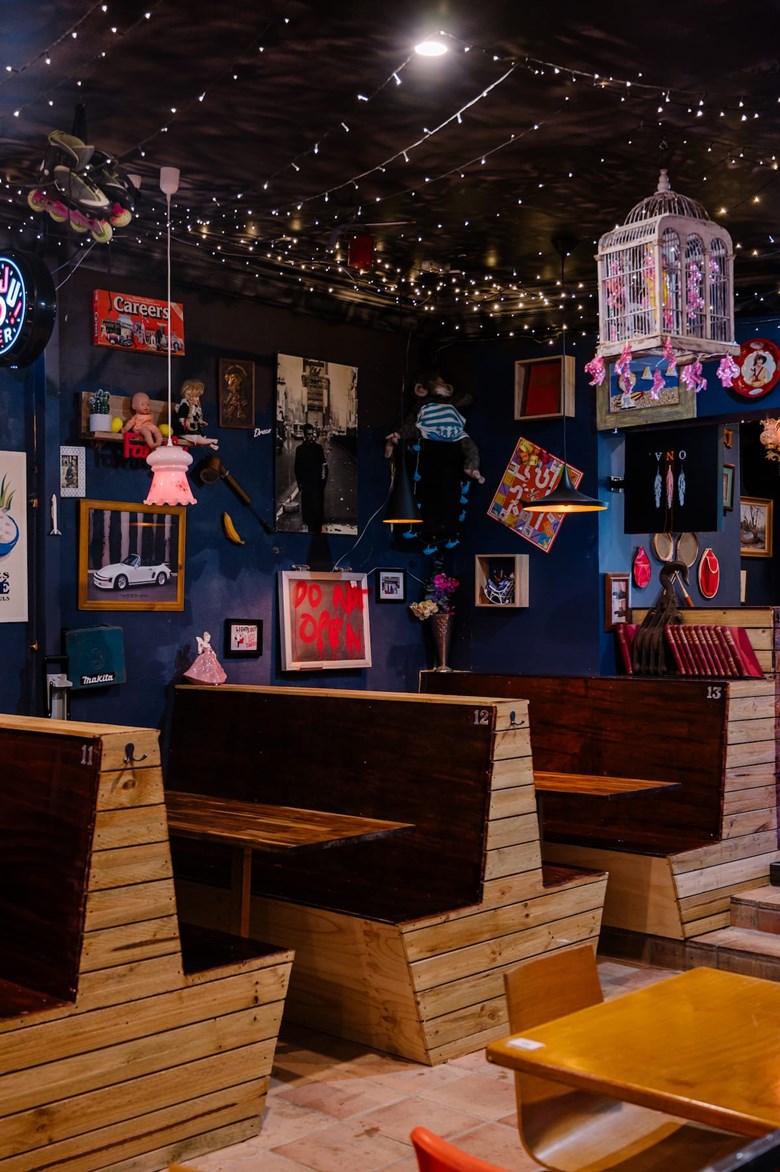 At the same time, craft beer in Australia was really starting to take off, so it seemed a bit of a no-brainer to join the two and kick off a brand-new, soon-to-be craze in their local community. Two years and many a follower later, Wings & Tins opened in Dee Why before finally bringing their unique flavours and character to the people to Newcastle in March 2022. 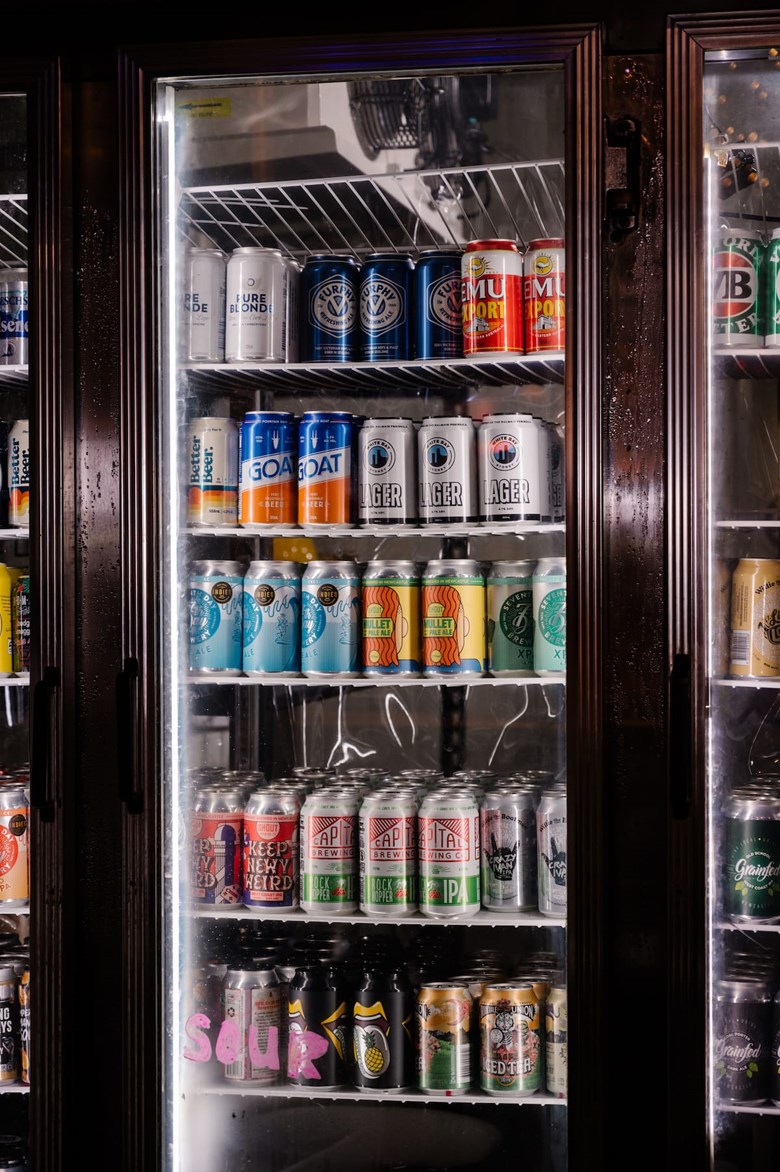 Having been in the business for the past two years and deciding to jump on the Wings & Tins bandwagon, Macca’s brother, Kevin, decided to relocate to Newcastle as part-owner and venue manager. We caught up with Kevin to chat about all things wings, tins, and to get to the bottom of that iconic yet slightly bizarre interior decoration they've become known for. 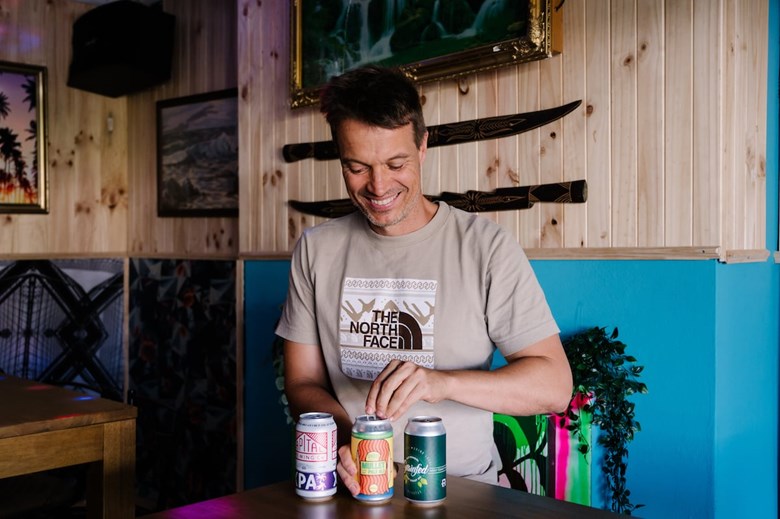 “The decorations come from the idea that we want people to constantly be looking around even once they’ve sat down. Every time people come back, they’re going to spot new things that they hadn’t spotted the time before. It’s quirky and gives you something to talk about and something to look at.”

With booths featuring throughout, each little corner of the venue features its very own little spot of personality. Take this one, for example, it’s what the guys call mum’s booth… 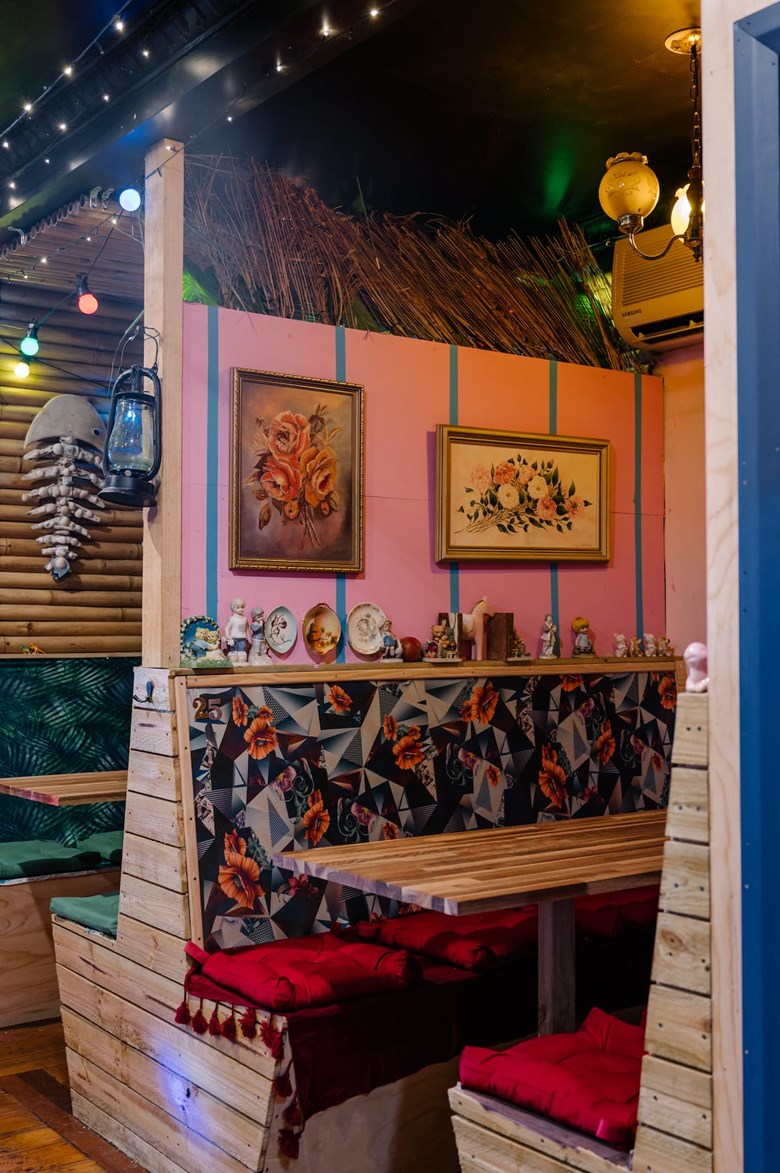 “One of the booths there is kind of pink and looks a bit like your grandmother’s house, so we’ve called it mum’s house. For some people, it might become their favourite booth that they try and book each and every time.” 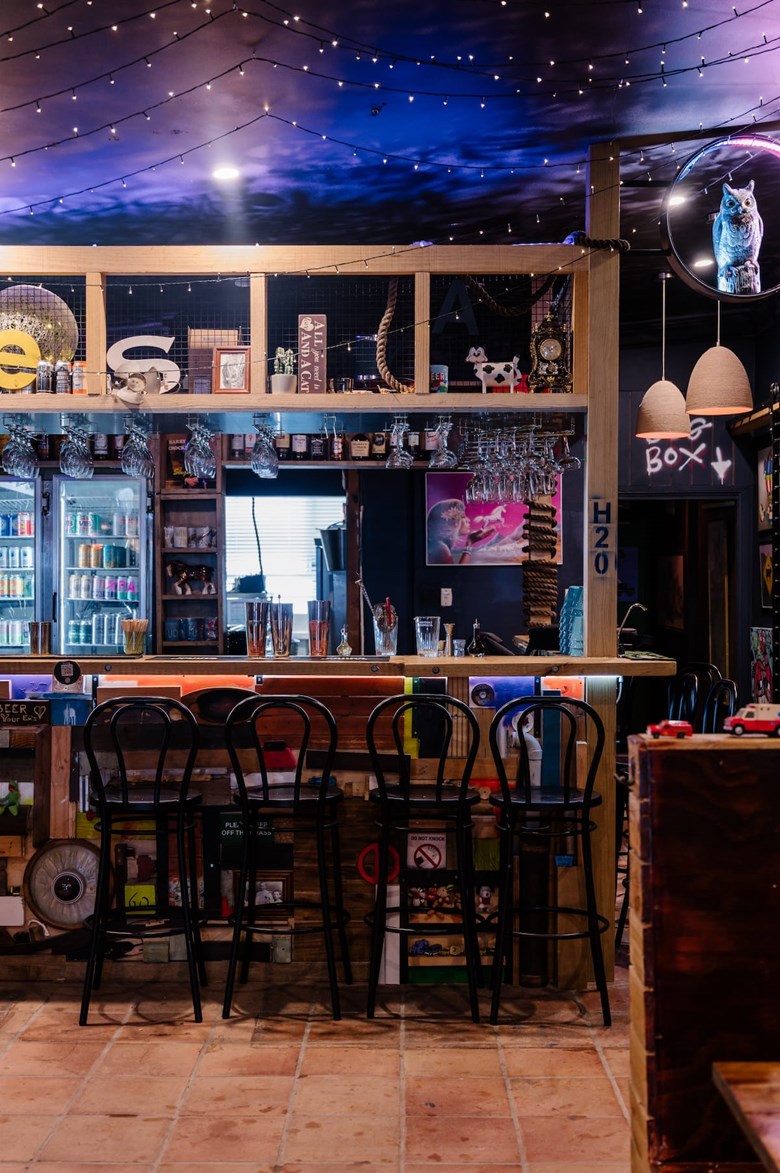 You can help but let your eyes fall on different spots of personality each time you look around. Whether it’s a saw on the wall, a birdcage or kids’ tricycles hanging from the ceiling, questionable art displayed throughout, or Kermit the frog sitting on the bar; there’s always something that makes you go, hey, look at that!

“We’ve made this really crappy art such a feature of this space. It is my favourite part of the whole venue. Every little piece of the whole space is a story, a little discussion that we’ve had or a place that we’ve been.” 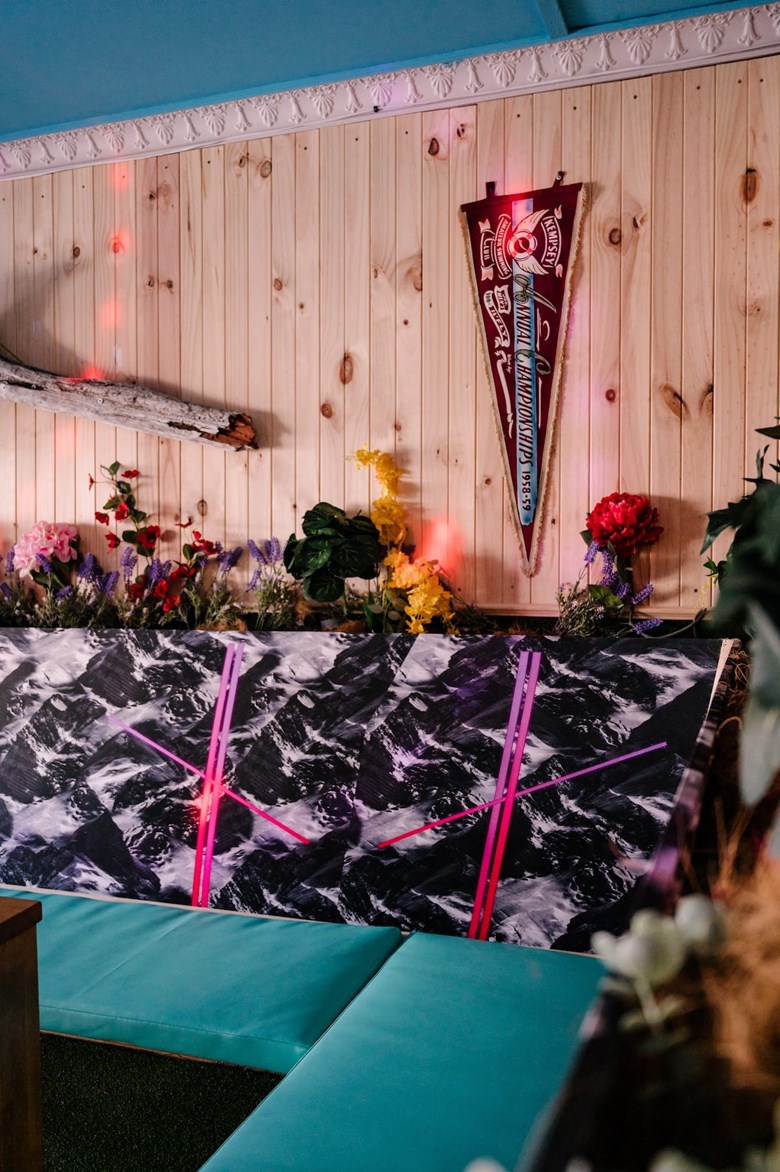 There is one little trinket that’s displayed somewhere in the venue that you should especially be keeping an eye out for. Star Wars character, Boba Fett is stationed somewhere throughout Wings & Tins, and for the first person to spot, you’ll score yourself something tasty on the house! 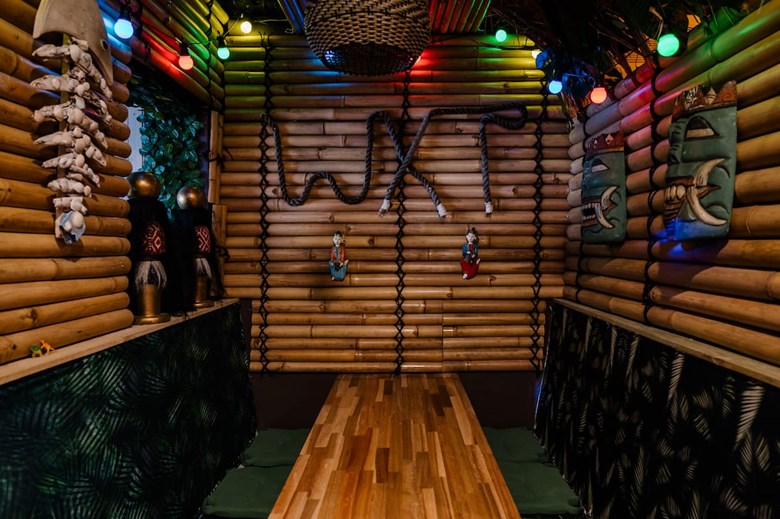 “There’s a special prize for the person who finds Boba Fett. It’s a Disney show that's on right now, it’s one of the Star Wars characters. Boba Fett is hiding somewhere in the venue. If you’re the first person to find it, you’ll win something on us!”

Heading out to the balcony is where Kevin says is his absolute favourite spot of the whole venue. 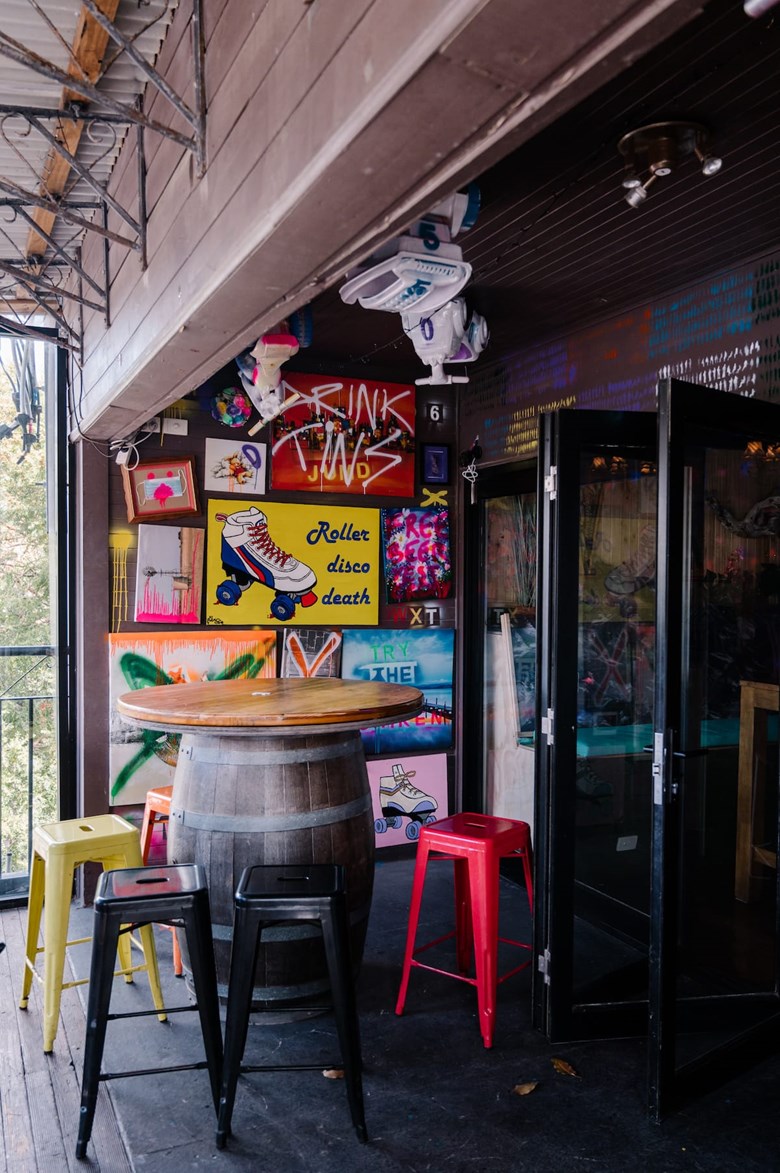 “I really like the first part of the balcony. We picked up a lot of art, and a lot of it was really bad art which was obviously the point. We didn’t want to pay more than $10 a painting. They looked terrible and putting them up was a little bit of a joke. We started sticking them up and my brother threw up his graffiti skills all over it. 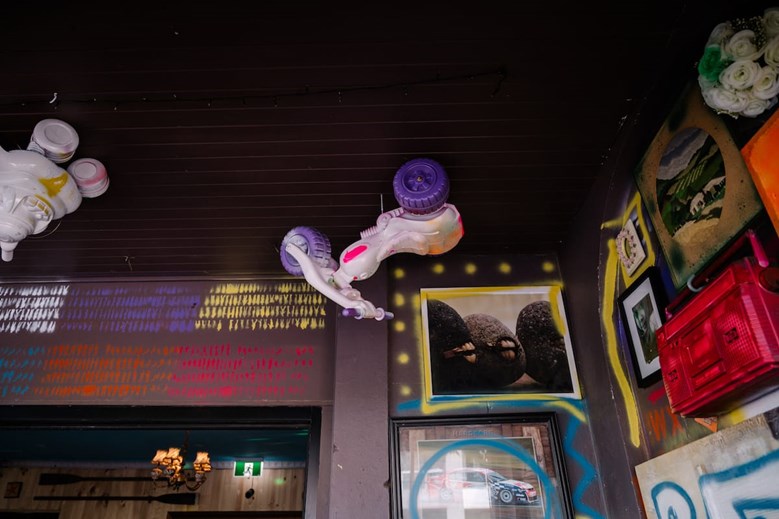 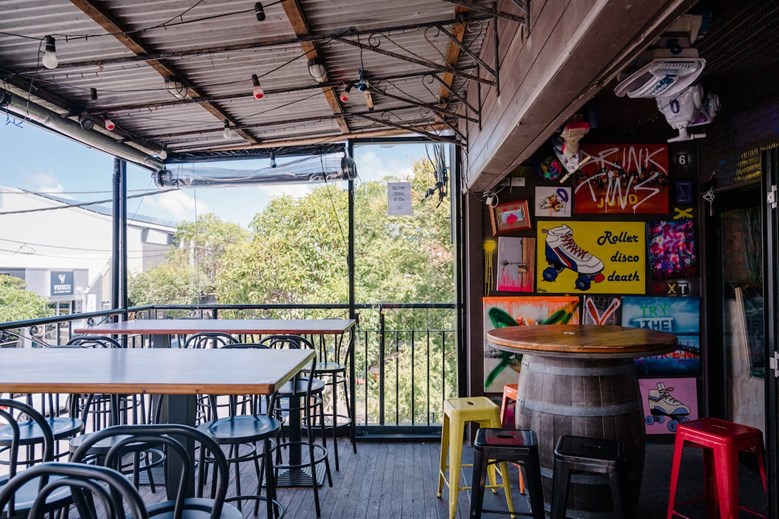 Now that we’ve covered the interiors off, you must be keen to hear about the food right? With three different categories of wings to browse, a bunch of sides, and tinnies for days, there’s plenty to experience.

“It’s quite a big menu, but in some ways, it’s also quite simple. It’s really based around chicken wings and sides. The basic chicken wings are kind of really stand out.” 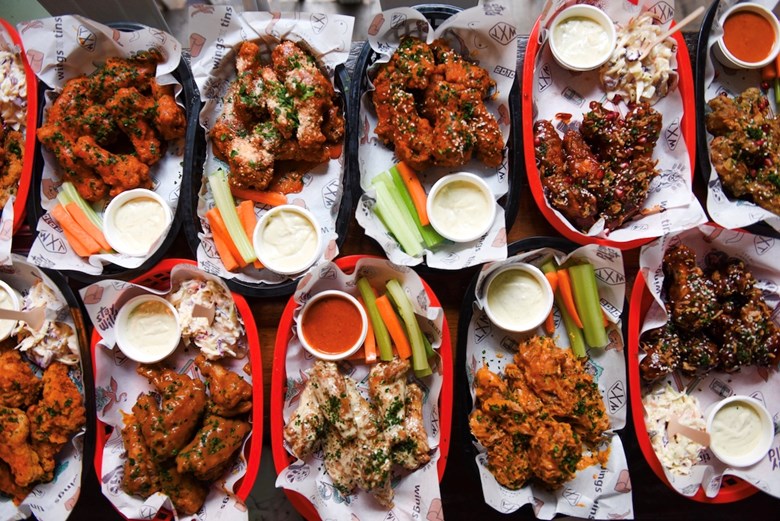 First and foremost is the Buffalo category with five flavours to choose from; House Buffalo, Franks Original, Alfie’s Hotsauce, Triple Sauce, and Doom Juice (more on this shortly). Each flavour is smothered in buffalo style sauce and served with house-made blue cheese dipping sauce, carrot, and celery sticks to help relieve the heat!

The BBQ wing flavours are for those who don’t want as much spice. Featuring flavours like Whiskey Maple (a crowd favourite), Smokey Chipotle, Satay, and Honey BBQ. Each served with house ranch dipping sauce, and carrot and celery sticks. 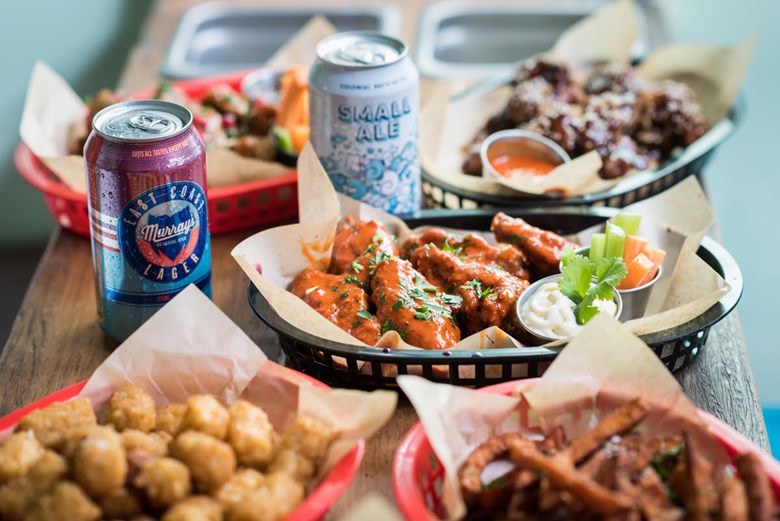 Now, back to the Doom Juice – what is it?

Not for the faint-hearted, Doom Juice are a serving of wings created with the hottest commercially available chilli in the world, the Carolina Reaper. 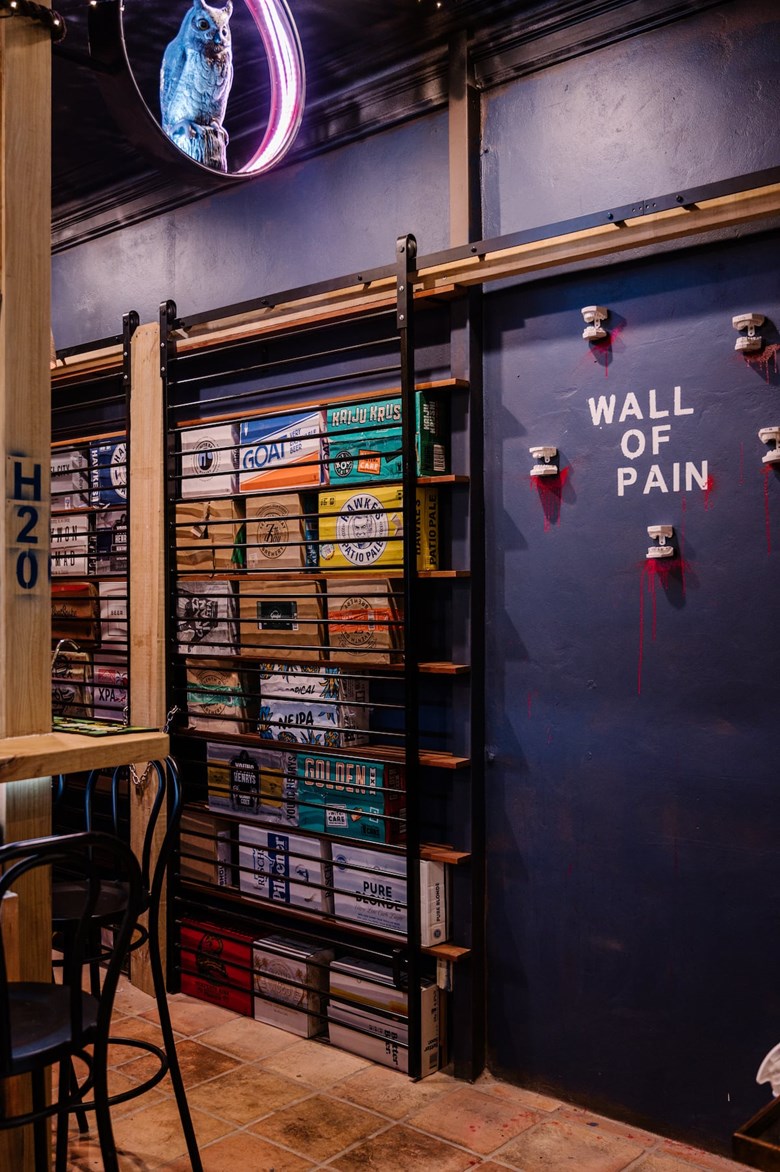 “People order this all the time, even though we highly do not recommend it. It is quite an experience that most people only ever want to have once, and they’ll regret it anyway. Some people just love it, but for most of us, it’s the challenge that we love.

“If you have seven and finish all of them, that’s our big Doom Juice challenge, that will see you featured on the Wings and Tins Wall of Pain. We’ve got about 60 names on the wall at Darlinghurst, and about 30 at Dee Why.” 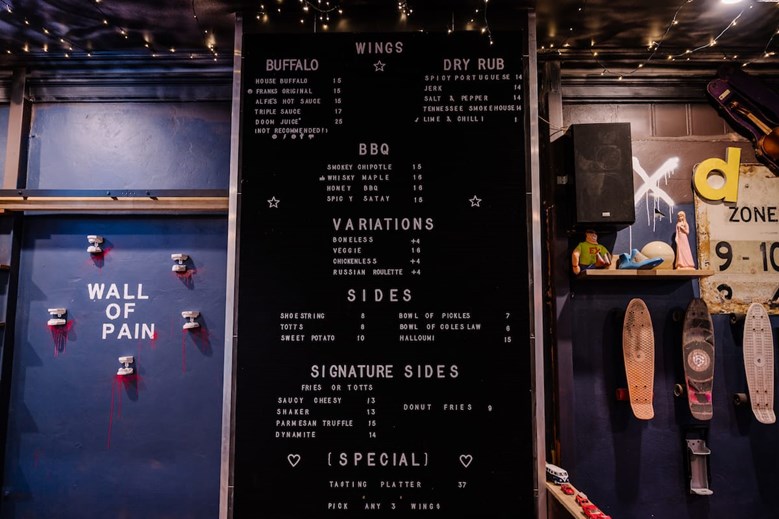 If you’re more interested in the challenge, check out the Russian Roulette offering, which sees seven wings served up, one of which is created with the Doom Juice. 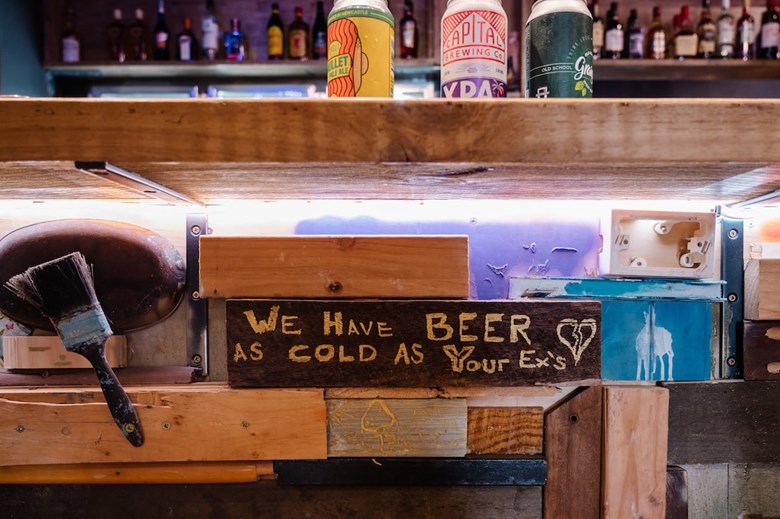 Wash all that wing eating down with a bunch of the Wings & Tins’ side options and choose from over 60 different tinnies including the classics like Carlton, Fosters, and Resches, as well as craft beer flavours including some of our local favourites like Shout Brewing, Grainfed, and Steel City. 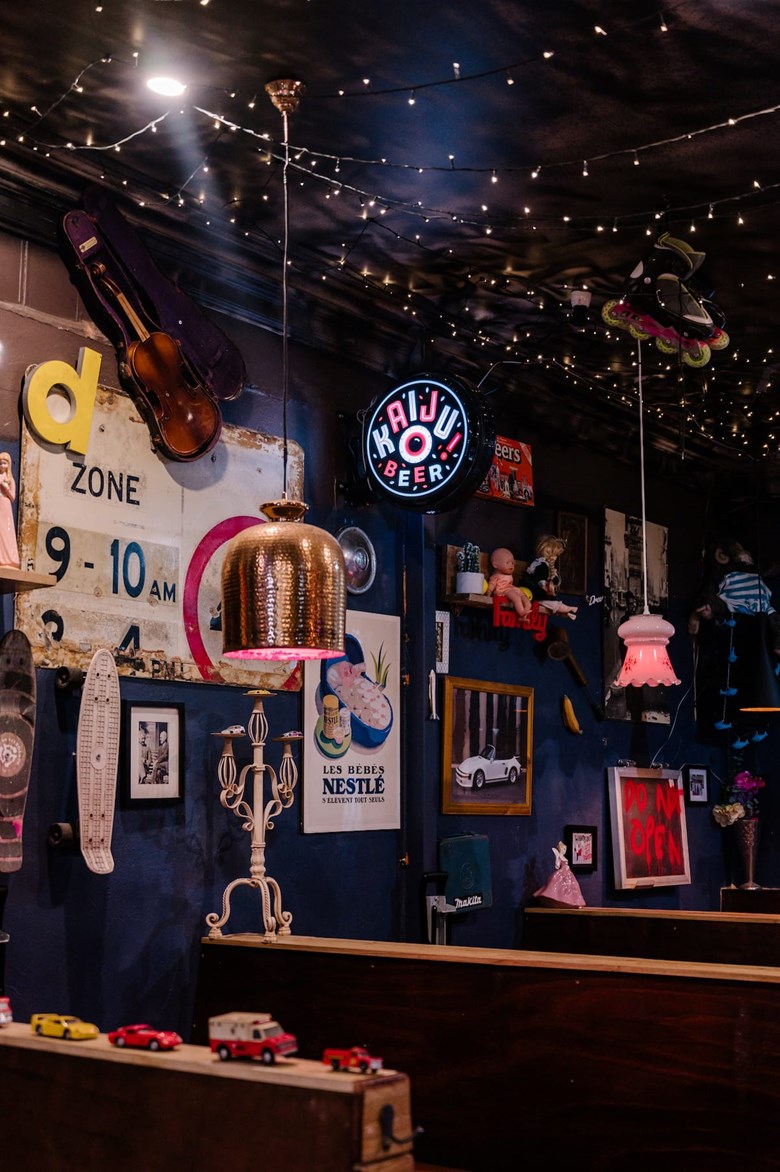 If you’re looking for the ultimate chill spot in Newcastle with good tunes, quirky décor, and fun vibes, head on over to Darby St to get your hands around some tasty wings whilst you swig some tins at our newest foodie spot; Wings & Tins.

Unique ceramics made for keeping