Chef Emerson Rodriguez is back in the kitchen and is rebuilding his first restaurant, one amazing dish at a time.

Oh yes, Emerson Rodriguez is back in the kitchen of his eponymous restaurant and I’ll be the first to admit that I’m pretty excited.  This time round though, the unassuming Chef has moved away from a fine dining menu to focus on classic, flavoursome a-la carte dishes in a relaxed and welcoming setting.

Following a busy lunch sitting, we were lucky enough to get some time with Emerson to talk about the new menu, leaving Yellow Billy and making pottery with Curtis Stone.

Located at the picturesque Adina Vineyard in Lovedale, Emerson’s Restaurant is the kind of place you’re likely to visit often and recommend to everyone.  Chatting with Emerson about food and his restaurant, I can certainly see why.  He understands very intuitively what people want when they visit and he knows how to deliver it, fresh, flavoursome and beautifully plated. 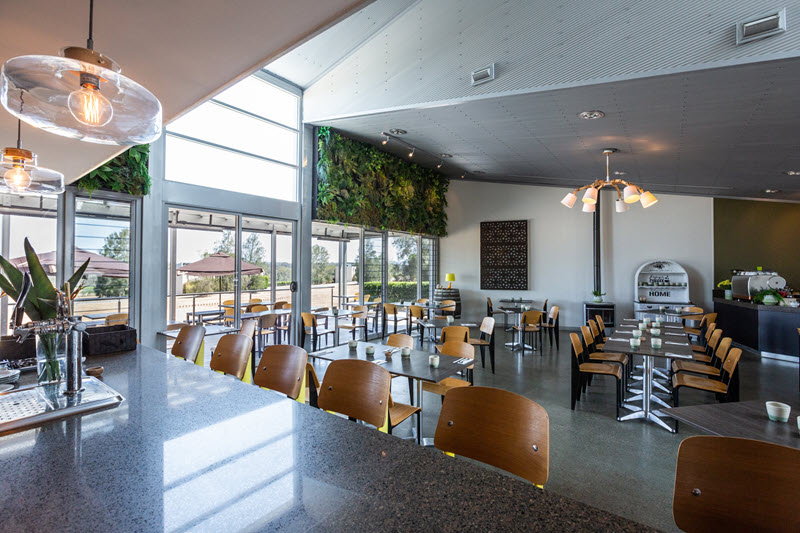 “The [fine dining] degustation menu we had was great but I found that not everyone wants a deconstructed dessert” notes Emerson.  “I’ve gone back to making the types of dishes we offered when we first opened.”

So far, according to the Chef, the feedback has been great.  And after tasting some of the new dishes, I heartily concur.  Honestly, what this man can do with a humble cruciferous vegetable is amazing!  His spiced and roasted cauliflower side topped with Binnorie fetta and toasted seeds is out of this world good. 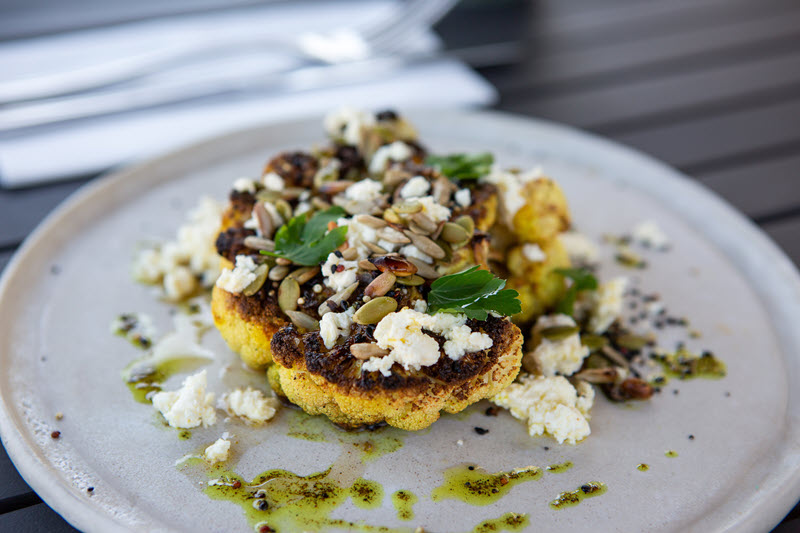 Emerson continues. “I’ve given the customers the control back.  If they just want to have a plate of croquettes and a glass or two of wine, they can do that now.”  Really, there’s no better place to do exactly that, than outside on the renovated deck area which Emerson had extended to take advantage of the lovely vineyard views and provide a more casual dining experience. 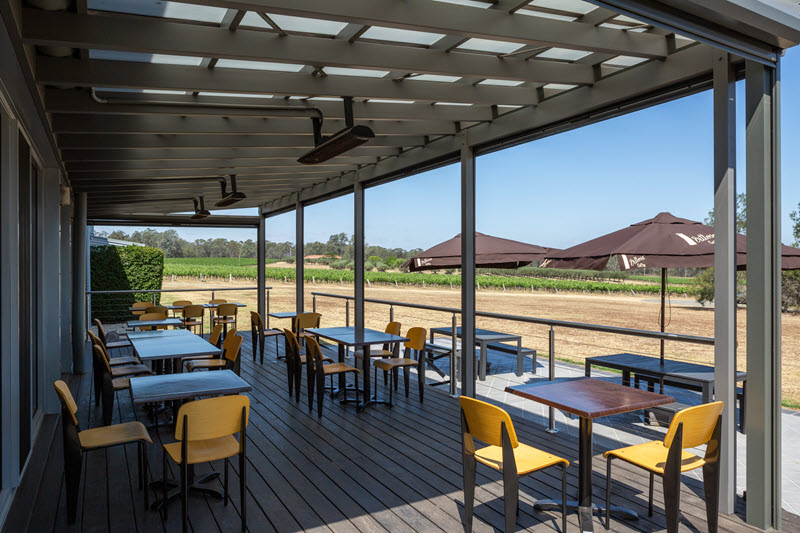 If you’ve been in and around the Hunter restaurant scene of late, you’ll have no doubt heard of Yellow Billy at Piggs Peake Winery, Emerson’s second successful restaurant venture.  According to Emerson, Yellow Billy was four years in the making and while he enjoyed doing something different to Emerson’s [restaurant], he couldn’t continue to split his time between the two. 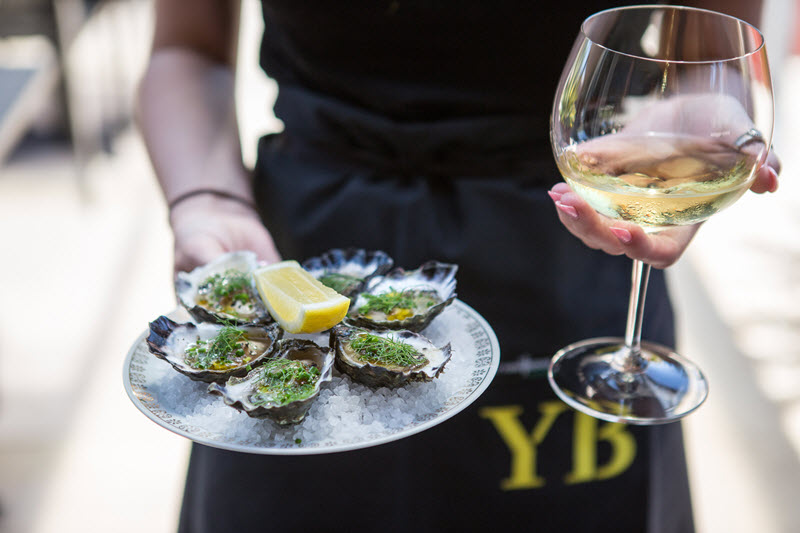 “About 18 months ago I knew I had to get business partners in to Yellow Billy because I couldn’t keep doing it on my own. I was there for 12 months full time and I could see Emerson’s was suffering so it was either stay or come back to Emerson’s.  With Chef Sam Alexander and Sommelier Pat Hester on board [at Yellow Billy] and doing such an amazing job, it was really a no-brainer.” 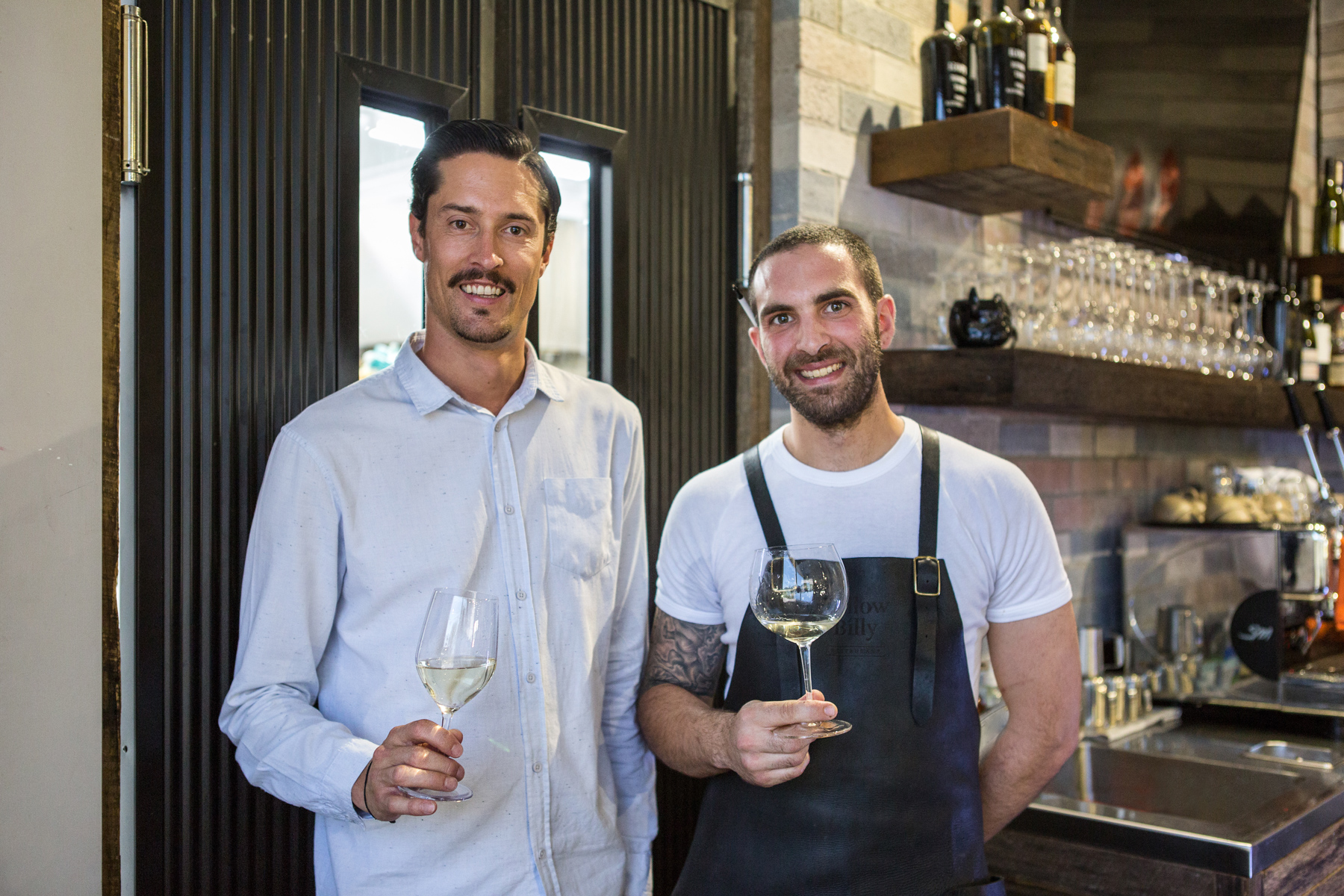 If you see him in action, you’ll know why working and managing two restaurants was nigh on impossible.  Emerson is very involved in every aspect of the restaurant.  It’s not uncommon for you to find him taking phone bookings and on a Tuesday night, making pottery plates, cups and other décor for use at the restaurant.  Something Emerson clearly gets a kick out of. 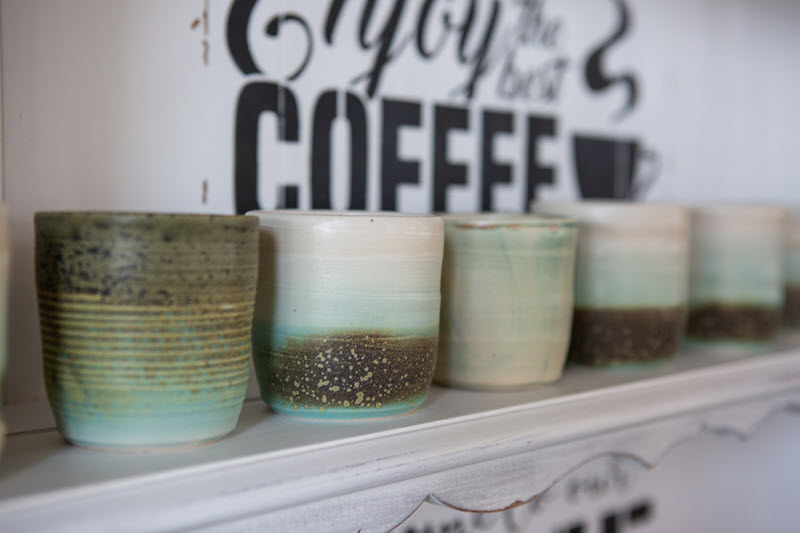 “Pottery is my downtime. I just thought, why not do something that I can actually use at the restaurant.  Seeing a dish that I created, that I put on my own plate. You just get so much satisfaction out of that.” 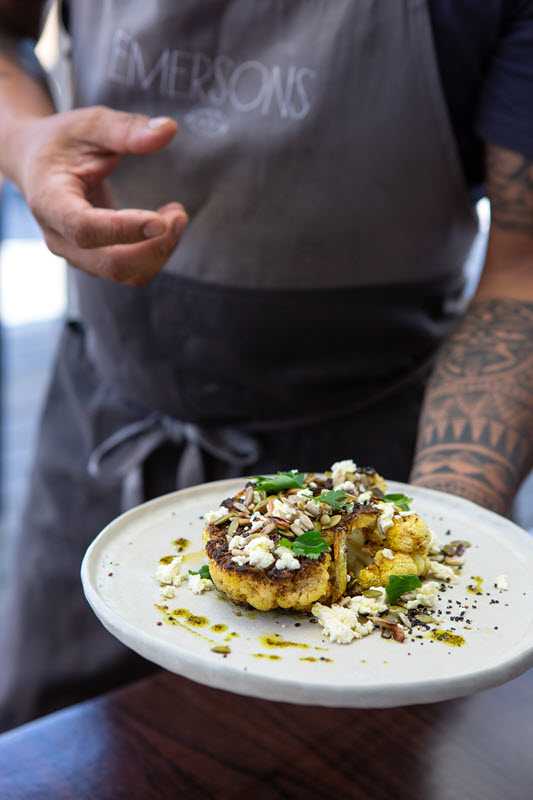 Naturally, a good deal of Emerson’s work time is spent meeting with suppliers to source the freshest produce around.  “My pork comes from Lovedale and I’ve been working with the supplier there for the last three years.  To get pigs raised organically just 500 meters down the road is pretty great.”

The same can be said for Shane’s Seafood, who Emerson’s been working with now for 19 years.  “I’m continually talking with Basil and Tony when they go to markets.  I’m always on the phone asking what’s coming in off the boats.”

Funnily enough as we’re talking, a special delivery arrives, and Emerson’s eyes light up as he pulls a handsome Spanish Mackerel from the cooler box, fresh from Shane’s of course. 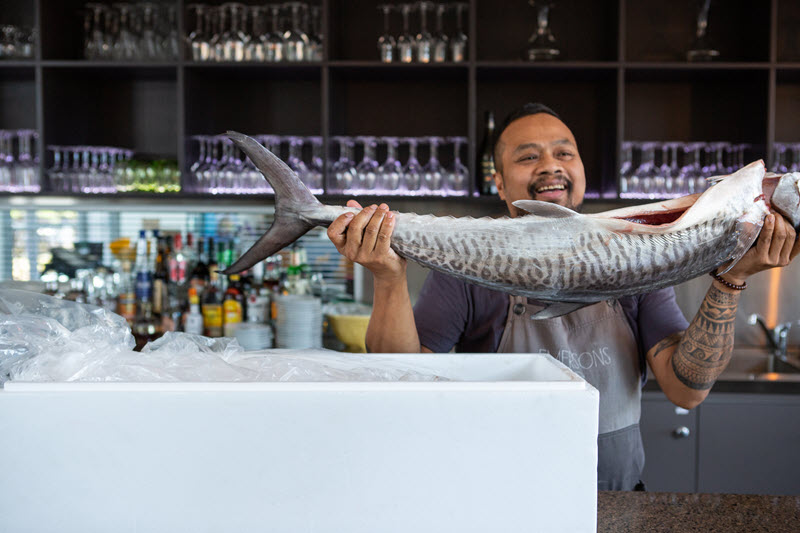 Perhaps it’s his Filipino heritage or the eight months he worked at Shane’s before opening Emerson’s – learning the trade and how to utilise all parts of the fish and other delectable seafood fare – but Emerson is a firm believer in not wasting produce, be it seafood, beef, poultry or any of the meats he uses for his flavoursome dishes.

“I get everything whole.  These days a lot of people just buy prime cuts because they don’t how to use the whole animal.  I use the heads, bellies and cheeks of the pigs I buy for a traditional Filipino meal we serve here at the restaurant.”

Don’t be dissuaded though if cultural dishes aren't  your cup of tea.  Emerson's has a whole range of delicious breakfast items, mains and snacks that are sure to tickle your fancy. 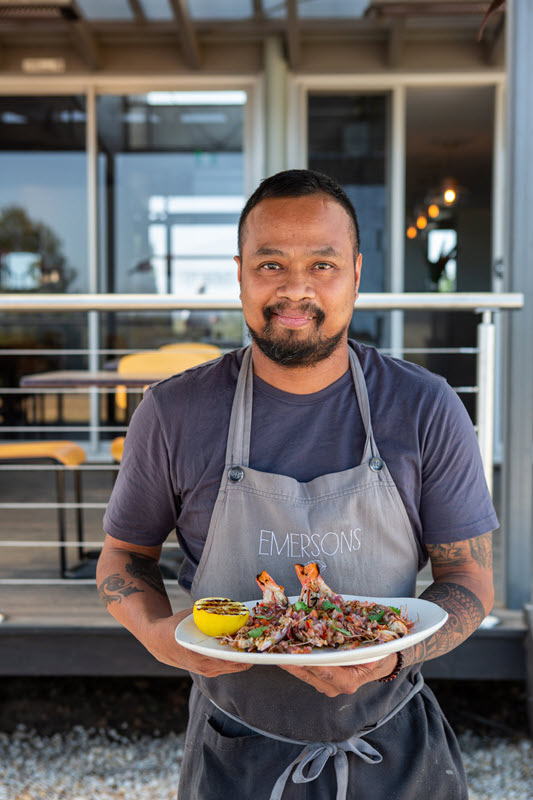 The prawn main that Emerson brings out next looks mouth-watering and doesn’t disappoint.  “You know presentation is important but it’s really all about the flavour.  Flavour indeed, the char-grilled Banana prawns with pico de gallo (a chunky salsa) are of course fresh from the morning markets and when paired with the salsa are just so good.

“The prawn dish and also our salmon breakfast poke bowl are selling really well.  It’s so easy to put together and it’s really tasty and healthy.” 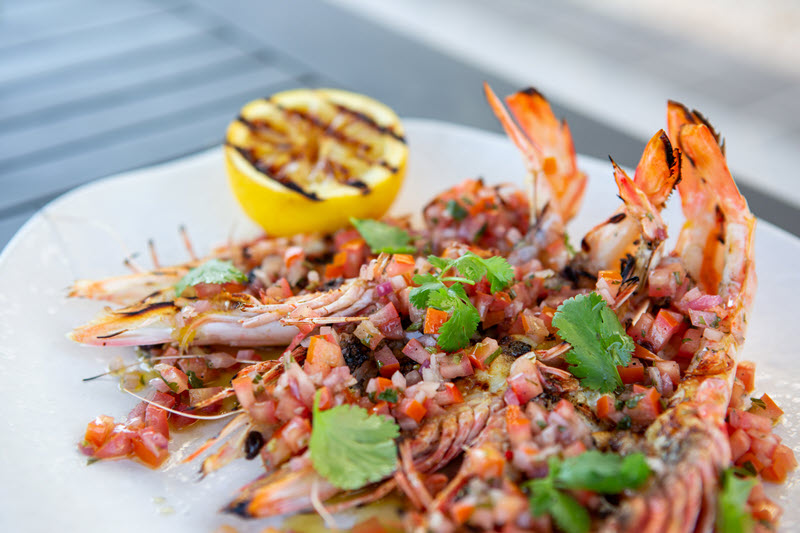 As I’m not very elegantly tucking into the prawns, Emerson, unwittingly drops into conversation that he was recently contacted by the team of famed Australian Chef Curtis Stone.  Say what?

“I got a phone call the week before Emerson’s opened back up and they said ‘Curtis wants to come to your restaurant’.  I told them the restaurant was closed because we were renovating and they said that Curtis was really interested in my pottery as well.  So, the next day they flew me by private helicopter from Sydney to Tyrrell’s and I was there for three hours on the pottery wheel, just teaching Curtis how to do it.  He’s a really nice guy.” 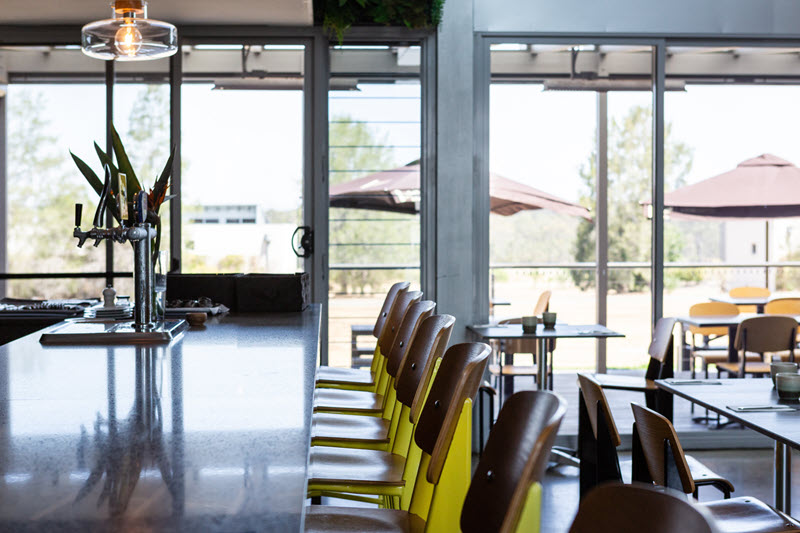 It seems everyone wants a piece of what Emerson is cooking up and quite frankly I don’t blame them.  But don’t just take my word for it or Emerson’s 25 years of culinary experience.  Every local I speak to has an equally lovely dining story from Emerson’s (past and present), recalling fondly their favourite dishes and memories made.

Next time you’re planning a breakfast, lunch or evening out, give Emerson’s new menu a go. It’s an absolute must in our book!

To make a booking or to check out the new menu, click here. 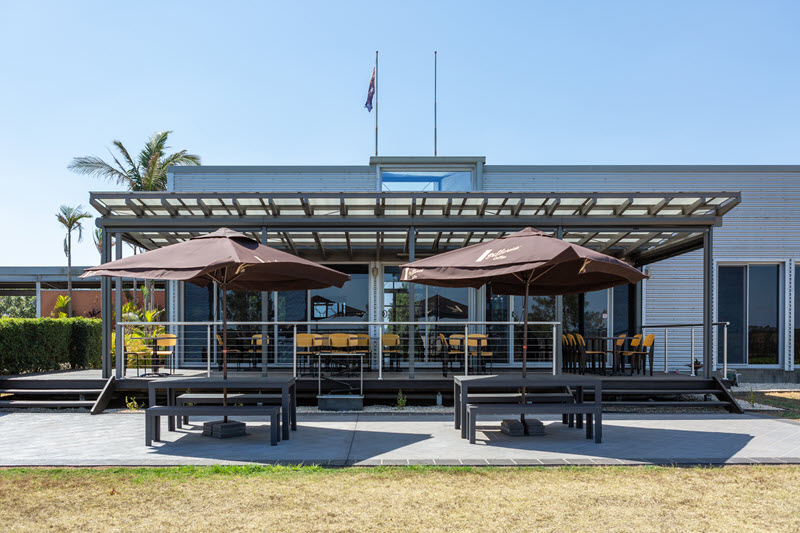 Our fav cheese destination is now in Lovedale

Escape to a Lovedale Boathouse retreat... 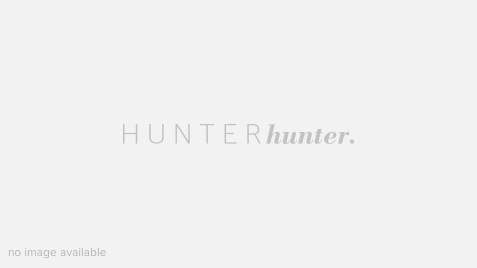