Local lad & one of Australia's most highly respected young chefs

You may not have heard of Josh Niland yet, but as one of Australia’s most highly respected up and coming young chefs, he is not to be overlooked.

His Paddington restaurant, Saint Peter recently came eleventh in Australia’s Top 100 Restaurants Awards, not bad for his first year in business as an owner operator.

Hailing from East Maitland, Josh was diagnosed with cancer at just eight years old and underwent over 18 months of chemo followed by radiotherapy. ‘Being put through that kind of stuff quite early it kind of gives you a bit of direction. It motivates you,’ Josh explained. 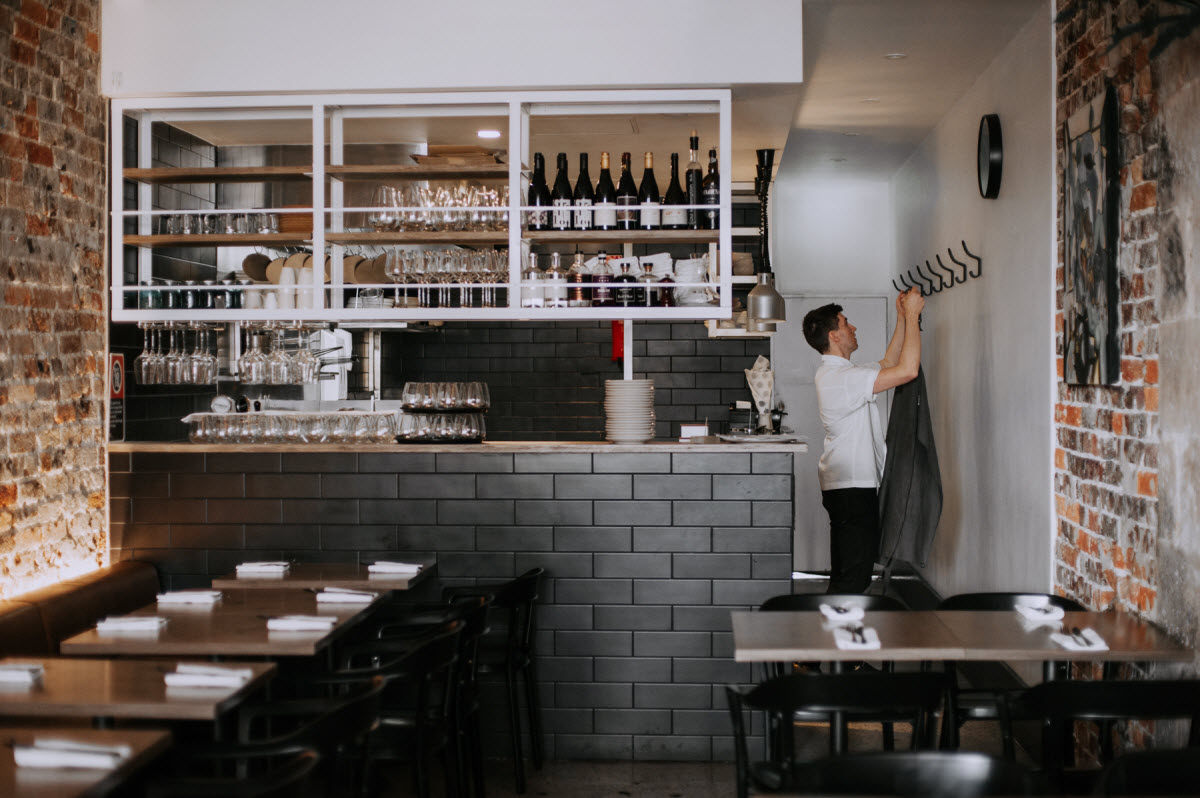 And that it did, ‘I thought I might want to be a nurse or work in health. But given the amount of time that I had off school and all the treatments and stuff, food kind of became a bit of a solace. Mum would cook for me and I would cook for her, nothing flash at all'.

So as soon as he was old enough to work Josh got a job in a local café, ‘I was washing dishes, making coffees and running food’. After leaving school in year 10 Josh started his apprenticeship at the Brewery Restaurant and it was during his time here that Josh had a chance meeting with Peter Doyle of est. restaurant. As he recounts, 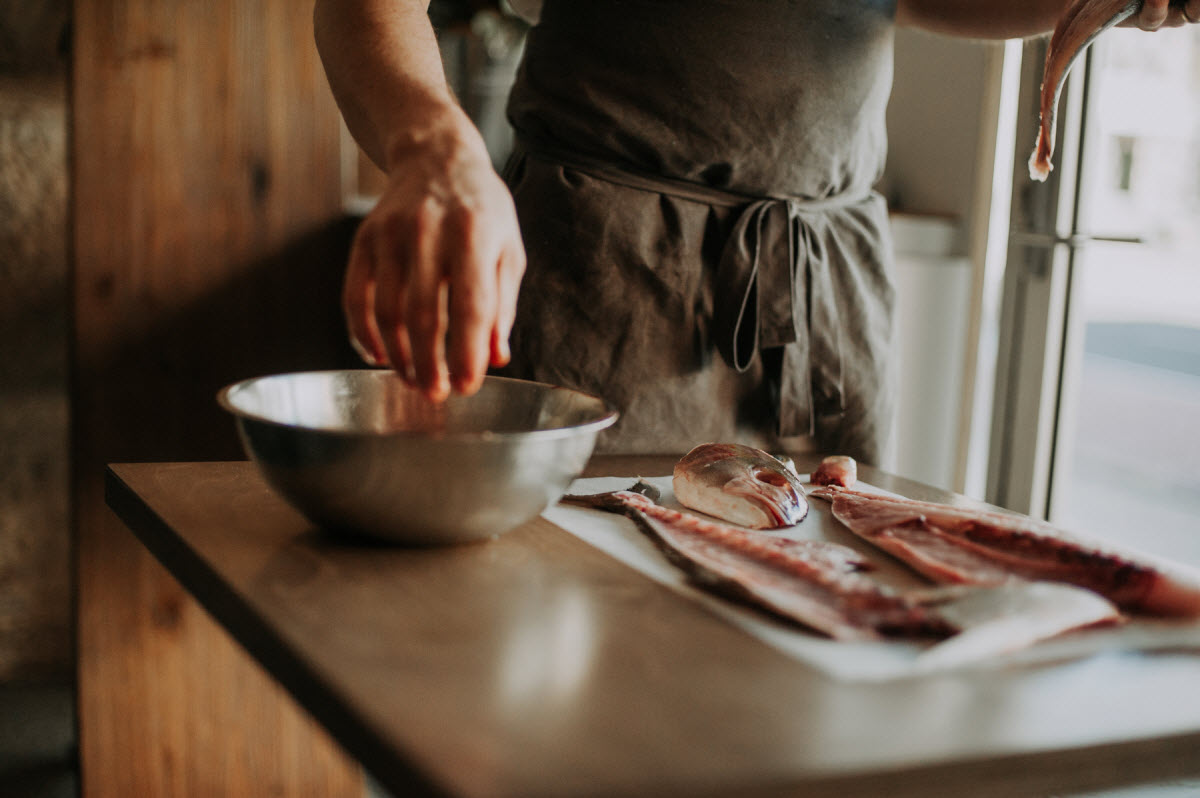 ‘Scratchley’s, our restaurant, Silo and Peter Doyle all went and did this Newcastle Sydney lunch [for Red Kite] and I spoke at the event and told my story… I had been cooking in the kitchen with Pete and then I left the kitchen quickly to go speak and Pete stepped out too and was watching, and then he started crying. When I went back into the kitchen he just whacked me and said “Why didn’t you say something?”. So that’s how I met Pete.

Pete then said, “You should come and check est. out and see what you think. Come have lunch with us”, and I was like that’s amazing. I thought he was a rock star’. 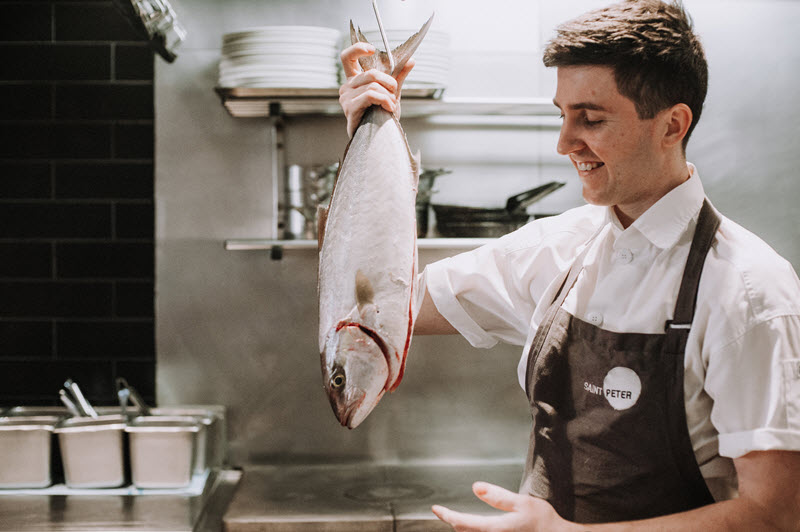 The very next day an eager 16-year-old Josh got all dressed up and jumped on the train to Sydney to go and have lunch with Peter Doyle. ‘Once I was seated Pete came out and he goes,

“What are you doing here?”

“You said to come”

“I meant, I saw you twelve hours ago”

“But I really wanted to come”

“Alright then. Are you hungry?”

So, then I sat there for about three or four hours and they just fed me. It had a very big impact! Then he asked me if I’d like to work for him, so I went home that night and I said to Mum I’m going to work for Peter Doyle. I’m going to move to Sydney. And she was like 'No, not until you’re 17.' 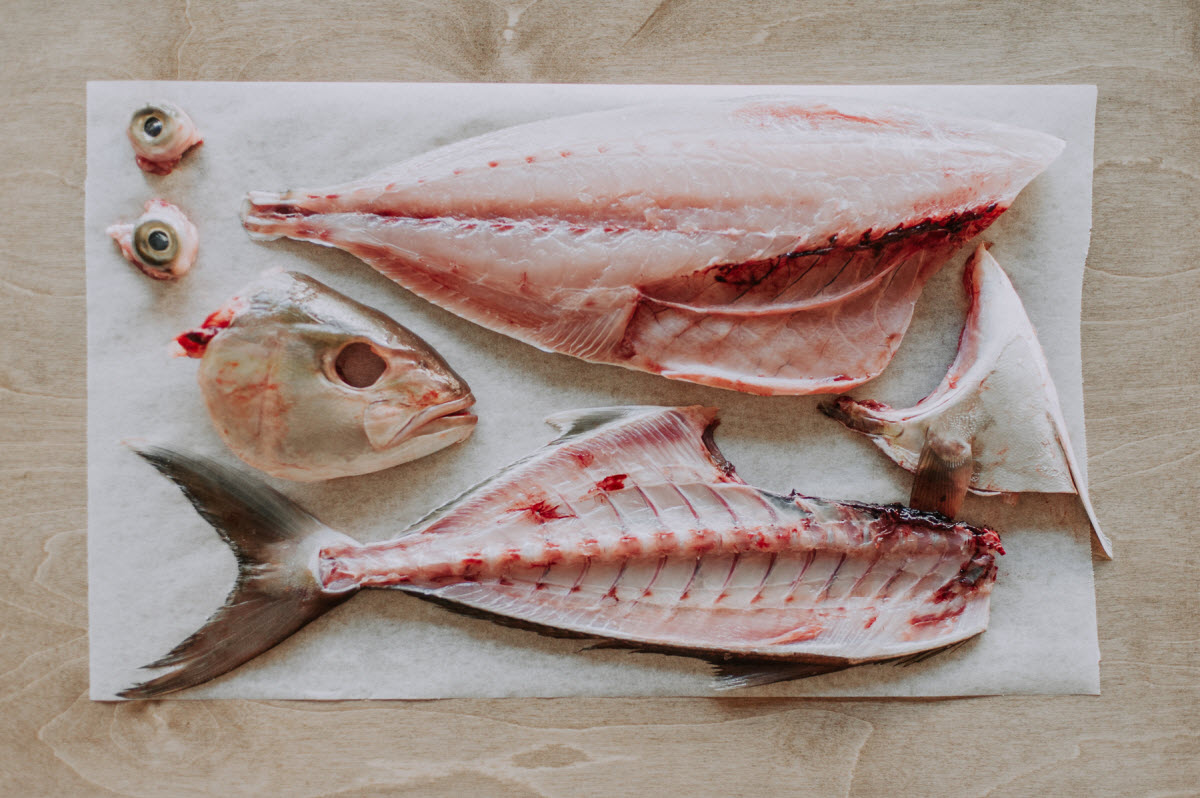 Six months later Josh turned 17, but in the meantime est. had won Restaurant of the Year and in Pete’s words ‘everybody wants to be here’, so the offer of an apprenticeship had passed. But Josh didn’t give up,

‘I started doing train trips on every day off to go to different restaurants in Sydney. So that’s how I got meet everyone in the industry at a very young age. One lunchtime I sat at Glass Brasserie for 5 hours and I just watched how it all worked because that was so new and so big. And then at the end Luke [Mangan] came and sat with me and he asked – “Are you a chef?”, and I said “I’m a chef and I’d really like to work for you”. And he said “OK”.

So, I went in and did a trial and got the job. Moved into an apartment by myself and then started working for Luke doing horrendous hours. There were nights slept in the staff canteen downstairs, missing alarms and getting changed running to the train station, putting my pants on back to front. All that sort of stuff.’

Josh has since worked in some of Sydney’s best kitchens, he has one impressive resume including est. Restaurant, Quay, Fish Face, Café Nice, The Woods and has travelled to the UK to do a four-month development stagiaire with Heston Blumenthal and helped write the Heston at Home cook book.

But it was at Darlinghurst’s Fish Face that ignited Josh's passion for seafood. Here he worked for Steve Hodges, who Josh describes as ‘insanely talented and knows everything about a fish, he knows how to cook everything, he’s a genius when it comes to fish cookery’.

In late 2016, aged 28, Josh opened his own restaurant, Saint Peter on Oxford Street Paddington. Which, you might guess from the name, is all about seafood, more specifically showcasing Australian sustainably caught seafood.

Cast your eyes over his Instagram account and you’ll be blown away with what this guy can do with seafood. His creativity has to be seen to be believed, including his techniques for dry-ageing fish, alongside his complete nose-to-scale approach to minimising waste and fostering creativity amongst his team of chefs. 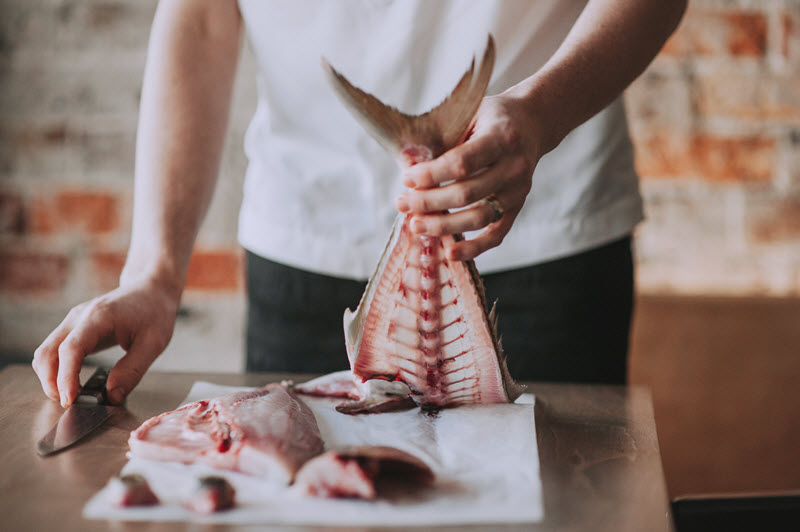 ‘We don’t specify what we want from the fish markets. I turn up and there’s fish here and then we write the menu. Rather than saying, I need a kilo of snapper and two ocean trout fillets, I say we’re 40% out of stock, sort us out. So, I’m about to get fish here any minute and I don’t know what it is.’

With this philosophy in mind, Josh sits down daily and writes the menu, based on what has come in from the markets that morning and what is dry ageing upstairs.

‘Sustainability is super important, in terms of who we are buying our fish from, how it got caught, and also when it comes here it’s our responsibility to not waste it, hence we use lots of methods of cookery for all those different parts of the fish.’ Josh uses pretty much every part of the fish from the eyes which are turned into puffed chips, to the bones which are used for stocks and salts, he’s even created fish black pudding. 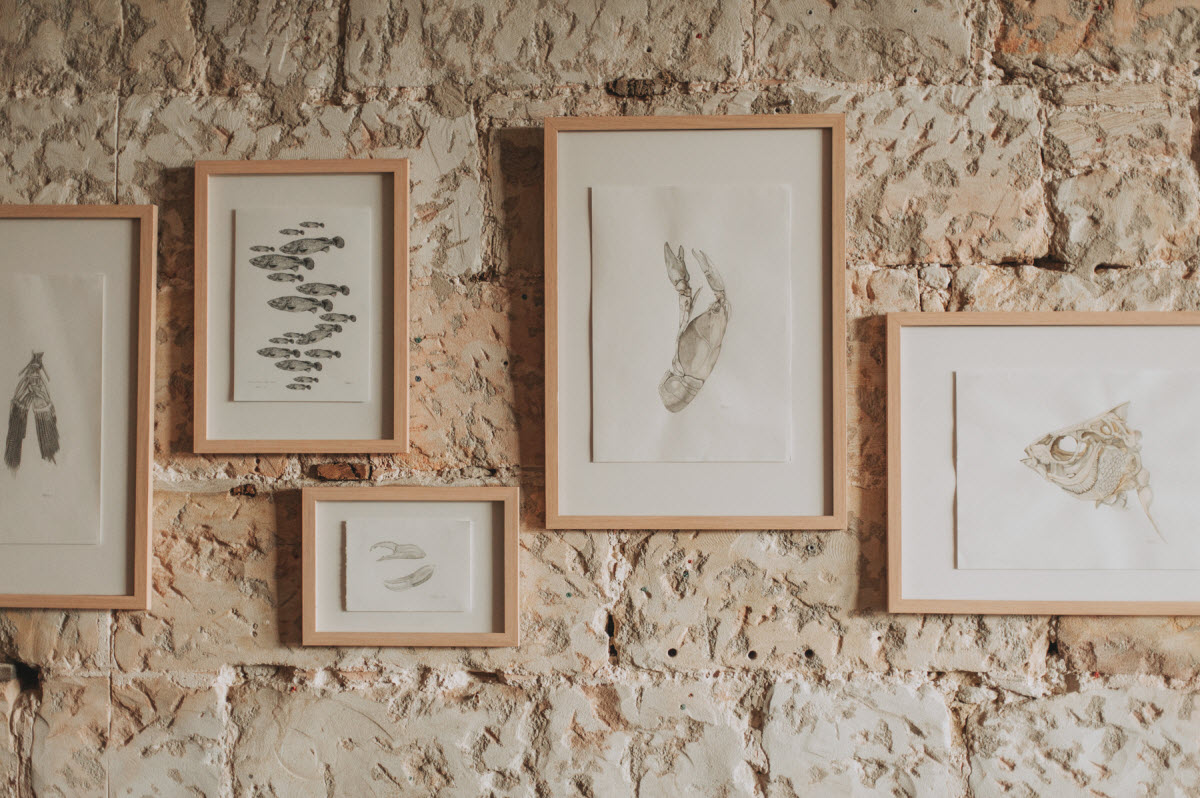 Josh’s drive, creativity and determination is bloody inspiring, when I asked Josh about having childhood cancer and how that has shaped his outlook on life he responded with, “It gives you more direction and focus having gone through something like that. Anything that comes into my head that I want, then I just do it. So that’s why a lot of what’s happened, has happened.” At just 28 years old, the world really is Josh’s oyster. 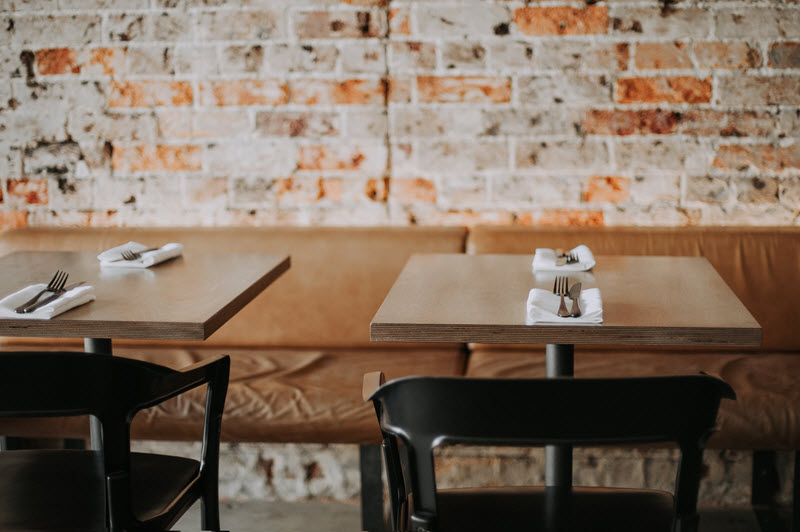 As it hits the milestone of 4 years, the evolution of Mayfield’s iconic Muster Point building continues

Get romantic in Newcastle with this date guide

Become a distiller for the day with Earp Distilling Co.