It’s been six years since Restaurant Mason first opened its doors. We took a revisit and chatted with owner and Head Chef Chris Thornton about how things have changed.

If you met Chris Thornton outside of Restaurant Mason, I am pretty sure the last thing that would come to mind is Chef of a fine dining restaurant. He's super friendly, couldn't-do-enough-for-you kind of personality doesn't fit the stereotypical traits of a Chef, which more than likely explains the longevity and success of Restaurant Mason.

It's hard to believe it's been six years, how have things changed for you and the team in that time?

Physically things have changed a bit, the kitchen has expanded and we closed the café side of the business. It was a lot of work, Ami [my wife] was working herself into the ground. The catering and restaurant were getting busier which meant we needed more space, so we joined the two areas together. That’s been the biggest physical change.

The food has been getting better and better, I have noticed the biggest changes in the last 18 months. Additionally, the staff we’ve got now, the senior and front of house I’ve had for four to five years, and they’ve all grown with the business and become key parts of the restaurant.

We’re getting better. More confident in our own product. We’ve profiled a lot of good producers and met some cool farmers. We’ve got a better idea of where the restaurant needs to go and the identity of the food. That being nose to tail, or farm to plate, just being more ethical and using every part of the animal.

You’ll never find a fillet on our menu. Everyone uses fillet and there’s more to a cow than that, so we commonly use rump caps, flanks, the chuck, blades and shins. A lot of the fruit and vegies we use, we try to source from local farmers. 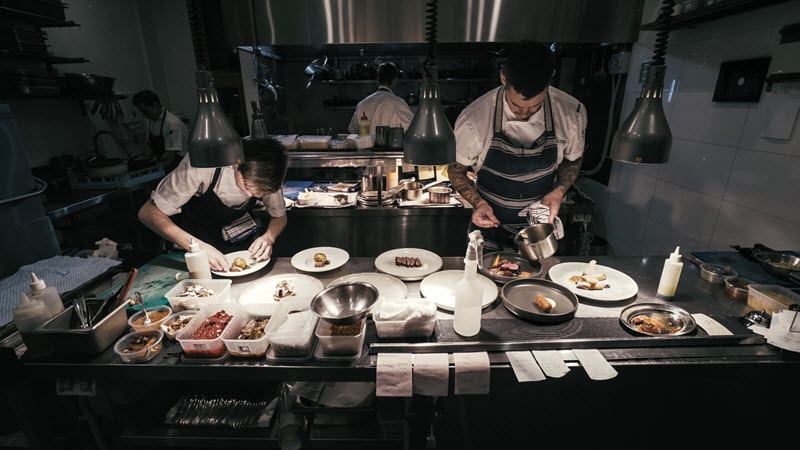 We try to minimise our waste so we’re reducing our impact rather than just trying to use the best of the best. For example, when we have the West Australian marrons, which are really expensive to get in, we use the shells, the heads and every bit of the flesh gets used.

How do you select what goes on your menu?

A lot of our menu is based on seasonal produce and what our suppliers bring to us, at the moment the main supplier we are working with is Dylan from Newcastle Greens. He has a lot of influence on what we put on the menu purely because a lot of the dishes are now inspired by the fruit and vegies and we build off that. We don’t have a set time to change the menu, it’s not like we change it every three months. 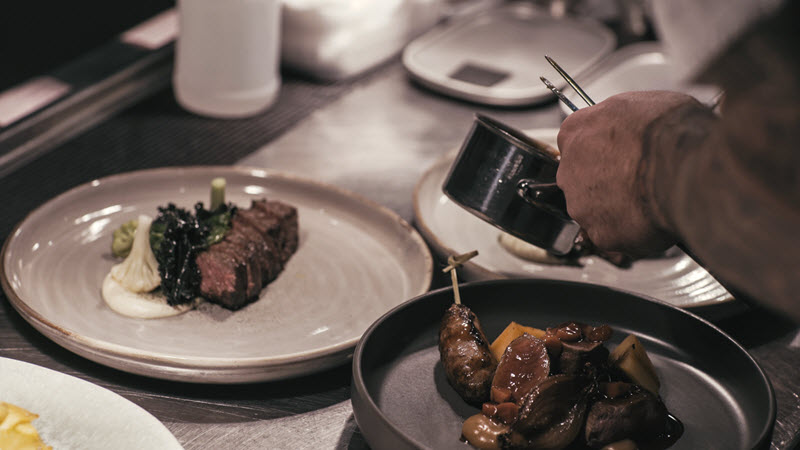 Have you ever considered moving to another location?

I’d never leave Newcastle, this is my home, this is why I left Europe, I’d never do this anywhere else. I just love Newcastle. All my friends are here, my family is close, and I surf a fair bit so the beaches are always here. I love the people and the community.

I’ve had such good support from the community everywhere I’ve worked in Newcastle whether it was Restaurant II or Bistro Tartine. They’ve trusted me to feed them different things and allowed me to grow as a chef and restauranteur. 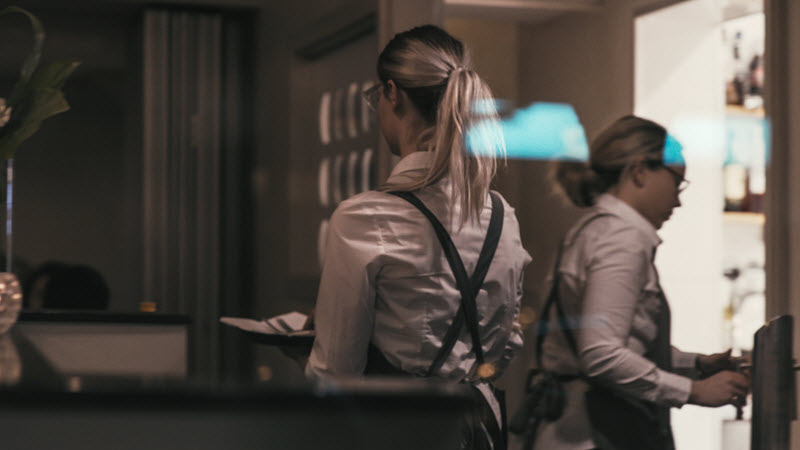 If you were located elsewhere, say Sydney, would your menu differ in any way?

We’re lucky in Newcastle in that we’re not completely governed by trends. Sydney can be a very trendy place, one minute you can be packed and the next minute you can be dead because something else is on trend. Only the absolute cream of the crop survive in Sydney, that’s why places like Quay, Sepia and Six Penny have stayed open for so long because they’re incredible. 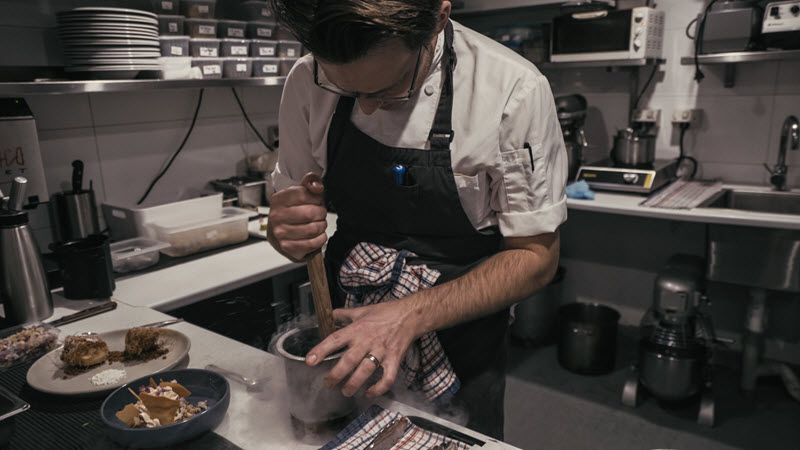 Are you limited in any way having a fine dining restaurant in Newcastle?

The produce you get here in Newcastle is as good as what you get in Sydney these days, but it used to be a bit of a struggle. I actually think it’s easier to get good produce here now because we are so close to and have such good relationships with our farmers. Dylan from Newcastle Greens, who does all of our brassica's, pumpkins and herbs, lives five minutes from my house. The farms where he gets all the produce from are half an hour away and we’re building a farm for the restaurant in Cooranbong which is only 45 minutes away.

That’s pretty exciting, was a farm always part of the plan?

Funnily enough I had a bit of a, not an identity crisis, I had a something! It was about 6 or 8 months ago and I was thinking ‘what are we doing?’, I felt a bit stale and I didn’t feel like I was having any good ideas. I happened to be watching Alain Passard French Chef’s table on Netflix and he was talking about his transition and how he now has these two farms for his restaurants and his menu is built around what’s grown, it’s where he gets his inspiration from.

I got talking with Dylan about this place he has in Cooranbong and he said if I can get some farm equipment I can farm it. There’s about 300m sq, so we should hopefully start seeing some produce in a couple of weeks. It’s really exciting and got me out of the lull, it should keep the creative juices flowing for a while. 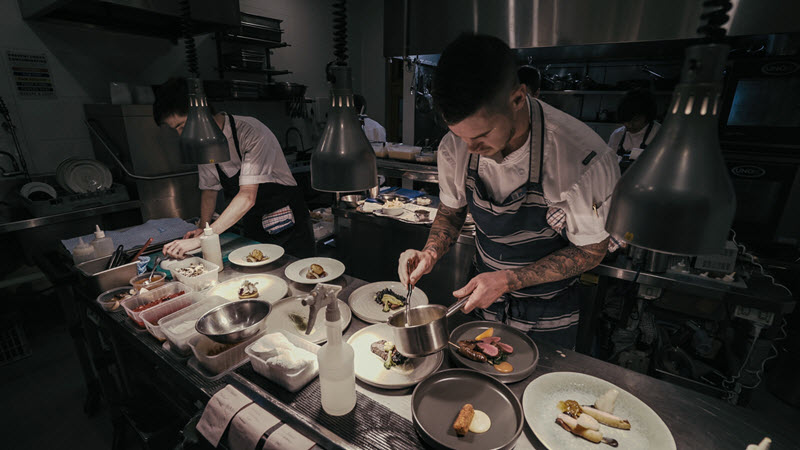 The Chef Hat awards are about to be announced, do you see these awards as being really important for your business?

I can tell you now that one of the biggest reasons why we succeeded early on was because we were awarded a Chef Hat in our first year. I didn’t think we would get it in our first year, when Terry and Gill came in that first time I was actually pretty calm, I was just hopeful  they would enjoy themselves and wrote something nice and if we didn't get the Hat that’s fine. When we got the Hat I remember calling my dad and I was teary, it was huge. I remember working really hard at Tartine’s to try and get a Hat but it didn’t really work and then to get it in the first year at Restaurant Mason was incredible.

The second year I was a lot more nervous than the first because there’s the possibility that you might lose it, we never know who the reviewers are, we just hope that when they come in they have the same experience as everyone else. 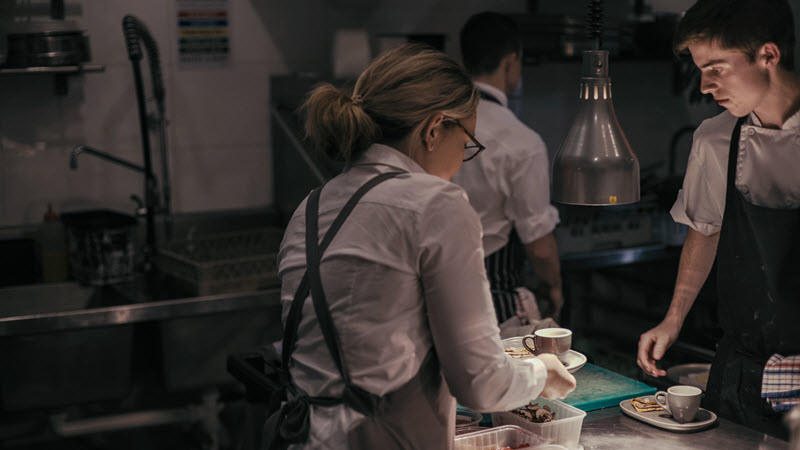 What type of food do you enjoy working with most?

I’ve always loved working with game, and I love butchering whole animals. I’m not that good at pastry, never have been, maybe a little bit too brutish to do it, but I’ve always enjoyed working with meat. There’s a certain kind of respect you get for a product when you know the farm it’s come from, then cook it, and serve the perfect piece of meat.

I was lucky enough to work in a butchers in London called Jack O’Shea and he taught me a lot of really cool stuff. He took me to Ireland to look at an abattoir which for me started the whole process of having respect for the product.

How important is your team?

Ami and I opened the business together, she runs all the back of house stuff, like payroll and accounts. It’s pretty safe to say that the business wouldn't have lasted if it hadn’t been for her. Ami is very very good at managing the money and making sure all our bills and staff are paid on time, which is another big reason we have such good relationships with our suppliers and staff.

Additionally, I can’t stress enough how good our teams is! I mean, I get all the accolades and the glory because I am the owner/head chef but a business like this is such a team effort that it would be a miss if I didn’t say how important those guys were to the success of the restaurant. Restaurant Mason wouldn't be what it is now without our Restaurant Manager Dani, Restaurant Supervisor Antonio, Sous Chef Josh, Head Pastry Chef Gareth and Event Co-ordinator Sheryn.