Welcome to the home of Interior Designer, Stewart Horton, his partner Brian and their adorable pooch, Mortimer.

Stewart’s style is unmistakable. His unique touch, impeccable taste and astounding eye for detail can be found behind the doors of some of the Hunter’s finest homes, and three years ago he was able to bring his creativity to life in his own home in New Lambton Heights.

“We bought the house ten years ago after living in Sydney for 17 years. When we came back to Newcastle we wanted a flat block, similar to what I grew up with in Hamilton South, and having lived in Sydney for so long, we longed for space, nature and seclusion from neighbours.

"The house itself was adorably cute in a ‘nana’ kind of way. It’s rare to find a house in this suburb with a completely flat block. We did a very small, partial renovation when we bought it, and then three years ago we totally gutted it and started again. The only original thing we kept was the fire mantle.” explains Stewart as he proudly shows me through his home.

When Stewart works with clients, his designs are a reflection of them – their style, their history, their personality. Seeing Stewart in his home, he has clearly applied the same ethos with his own renovation. Put simply, if Stewart were a house, this would be it!

Sitting slightly back from the road, amongst other brick houses with terracotta rooves, the house is perfectly at home in its environment. The first hint you have that you’re in for something special when you enter, is the placement of twin retro white potted plants on the front patio. They are perfectly understated, while still packing an aesthetic punch.

What was the house like when you bought it Stewart?

“Although it was built in 1949, it had lost many of its original features. It had been badly renovated in the 80’s/90’s and the floorplan had been altered in a really weird way. We literally gutted the whole place – walls, floors, ceilings, the lot. We took the floorplan back to what it was originally, with a few tweaks. The only things we kept are the original mantle and the dining room window.”

Where did you get your design inspiration?

“It all started with the mantle. I loved the curves and the fluting. It brings me joy to be able to have an original part of the house to play homage to and build character throughout based on that.”

Fluting in the joinery in the kitchen and bathroom and subtle curves throughout the interior, such as the retro tap wear, the pink stool in the bathroom and the bespoke pink terrazzo dining table with circular pendant overhead were all inspired by the fireplace.

“The style of our home was designed to reflect the house and honour its surrounds. Paying homage to the original part of the house gives me a personal joy. We wanted the house to be light, bright, airy and clean. I wanted to be faithful to the home’s heritage, so I incorporated the pink and grey from the original bathroom into the final colour palette of the interior." 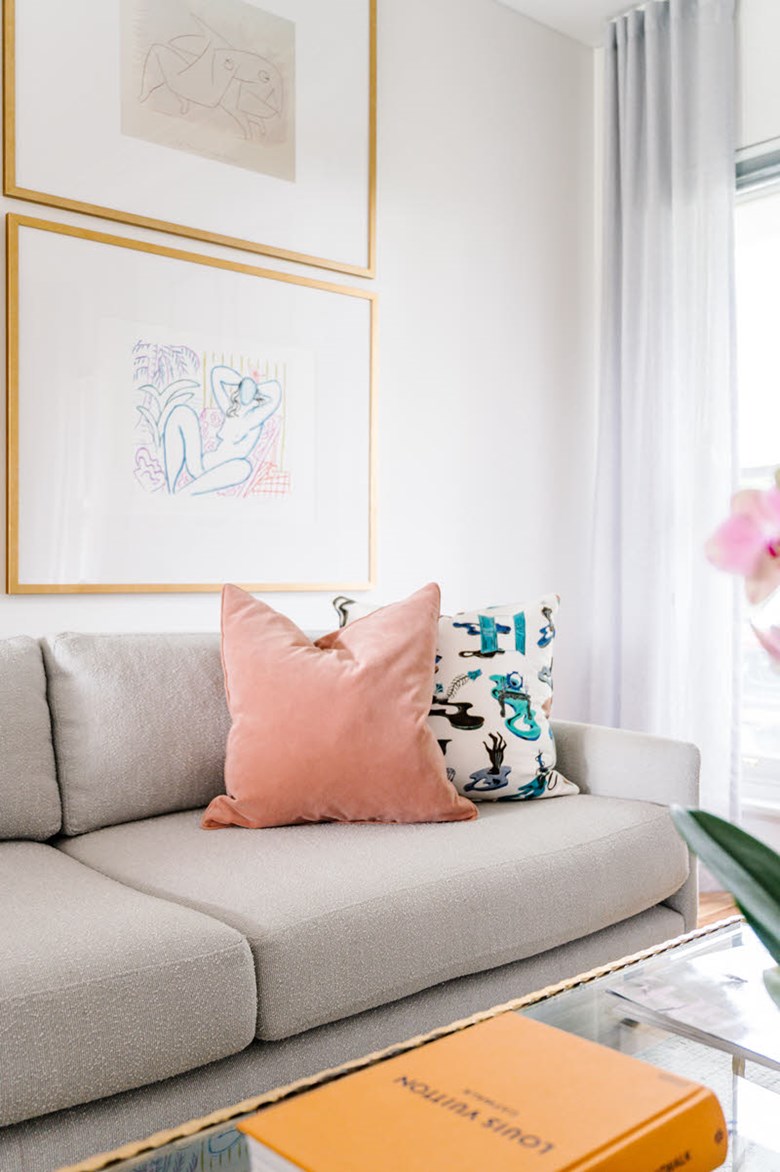 "I’m a huge fan of pink. I think it’s nice when men use pink. I rarely get to use it. I say to my clients, whatever is in your house should mean something to you and should be something you’ll never get bored of, and that’s what pink is for me. Ironically there’s not a lot of pink in my house. A lot of time it’s layering like the terracotta in the dining table top with the plum of the plants outside. I’m not a big fan of Barbie, candy pink. I like something more natural.”

Another subtle reference to the home’s era are the terrazzo tiles used on the bathroom floor which were inspired by the terrazzo threshold on the original doorways.

Stewart masterfully uses balance, contrast and repetition in his design. His living room wall serves as a backdrop for six framed prints, hung to perfection above the sofa. One of the prints is his own handywork of coloured strips of paper to reflect the colour palette of the home. Above the mantlepiece hang four identical mirrors that serve both an aesthetic as well as a practical function.

In a deeply personal touch, the wallpaper in the master bedroom was designed by both Stewart and Brian whilst doodling on their iPad.

Many a guest comment on the beautiful original ceilings in the living room and dining room. The stunning treatment, however, is only three years old and came about by way of a happy accident.

“We were just going to do a flat ceiling but there were some issues with the connection of the ceiling to the wall so we had to either put cornices in or drop it around the edge, so we thought this would be a really cute way to solve the problem. It feels as though it’s always been here and is my favourite part of the room.”

Stewart is an advocate for mixing your favourite pieces and has done so in his own home. An elegant occasional chair in the living room by French designer Vincent Darre adds a touch of luxury and individuality to the space. Their art is an eclectic mix of originals and prints but the artful way in which they’re hung celebrates each piece in its own right.

“Everything doesn’t need to be super expensive and bespoke. You can mix high end with run of the mill pieces. You don’t want it to look like it’s from the same showroom. It’s about the mix. Adding antique pieces and very contemporary Danish pieces gives it that fresh vibe.”

Stewart’s study is his sanctuary. With built-in floor to ceiling cabinetry and a soft colour palette of pinks and warm timber tones, this room evokes a different mood entirely. Hanging behind the desk is a painting by Sydney artist Tom Yousif. “I love the scale of it”, enthuses Stewart. 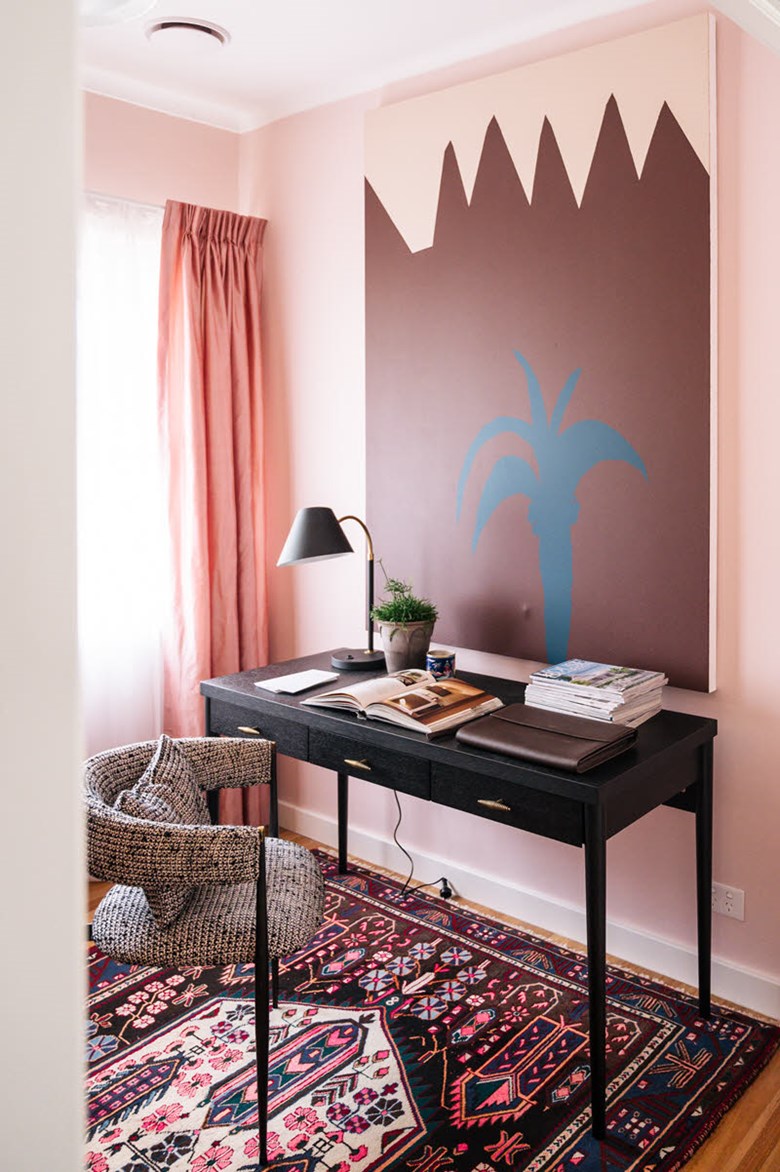 Are there other artists whose work you’re drawn to?

“I like to constantly update and rotate my art. The piece in the entry way was a recent purchase. It’s by a Tasmanian artist called Lucienne Rickard and the entire portrait was painted with her finger. If you look closely, you can see her fingerprint in each dot. I also like local artists, Nicole Chaffey, Shan Turner-Caroll and Clare Martin.”

What are you most proud of with this renovation?

“I’m most proud of the kitchen. It’s such a ridiculously functional and efficient kitchen. It’s small but so easy to use and ergonomic but also beautiful. Urban Joinery did all of my kitchen and building joinery.”

The kitchen and dining room open out to the expansive backyard. Stewart did the landscape design himself, choosing repetitive planting of plum trees and contrasting hedging plants to create a formal border of the property. Across the flagstone patio, which will soon house a pergola, is a manicured lawn that runs down to a hedge, designed to be a visual barrier between the lawn and the vegetable garden at the back of the property. As with the interior of the home, the outside is a successful combination of beautiful visual aesthetics and functionality. 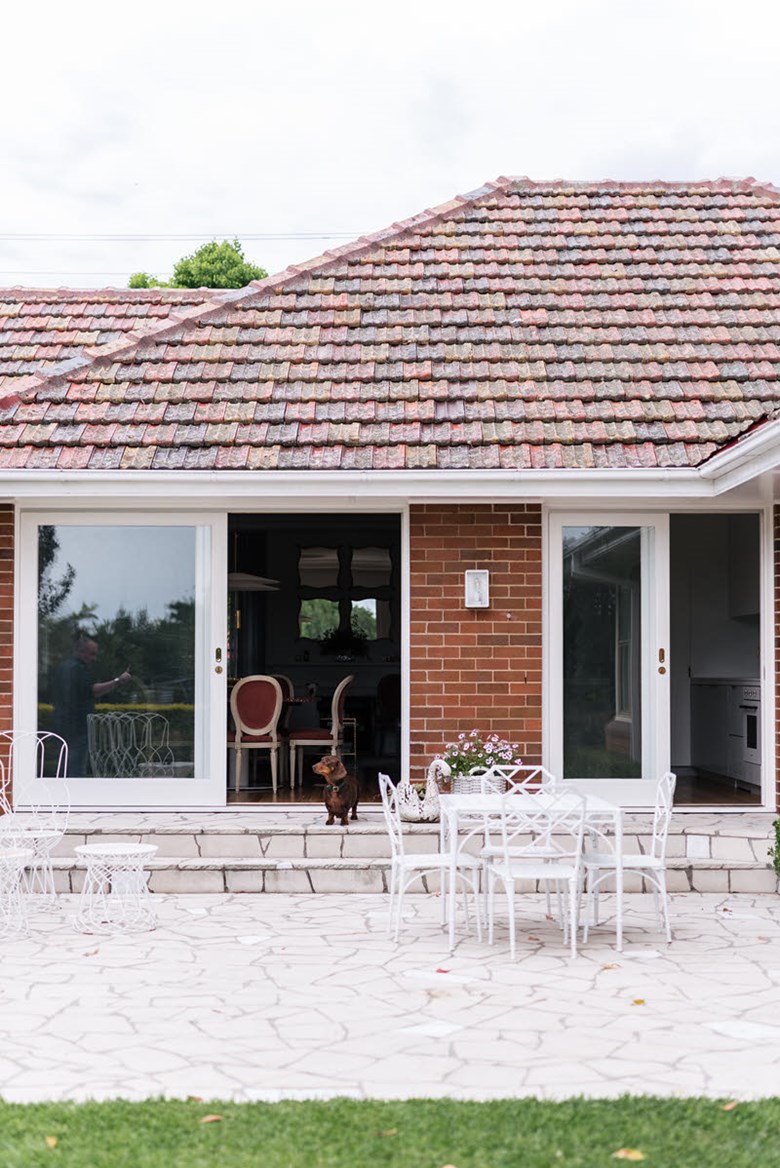 “My favourite thing is going out the back to put the compost out or pick some herbs, then walking back into the house. It’s the elevation that sold the house to me. It has a real friendliness to it and brings me joy”.

It’s that sense of joy that first drew Stewart and Brian to the house all those years ago, and it’s that same sense of joy that has been both nurtured and celebrated during the renovation. The result is an ever so sophisticated, beautiful and welcoming home for this super stylish family of three.

Want your home featured in House Proud? or do you know of a beautiful home that is in need of sharing? To be considered please contact our House Proud Editor, Julie Evans for more details at - houseproud@hunterhunter.com.au

An education in design, inside the McGrath's home