Situated in Dooralong it’s quite a trek to Belynda Henry’s home.

We traversed little wooden bridges, wound around gravelly roads and through thick bushland. We also had to negotiate the extremely steep driveway that my car isn't necessarily built for. Yet, none of that seemed to matter once we arrived.

Stepping out of the car not only was I greeted by the lovely Belynda and her beautiful doberman pup, Bozzie, but there was that quintessential bush soundtrack. The 40 acre property that Belynda lives on with her husband Michael and two daughters Chloe (16), Milla (9) and Lily the Kelpie, is set amongst a wild backdrop and is a pleasant surprise after what was an interesting journey.

“I love the quiet and not having people around, it’s the perfect artist's retreat.” 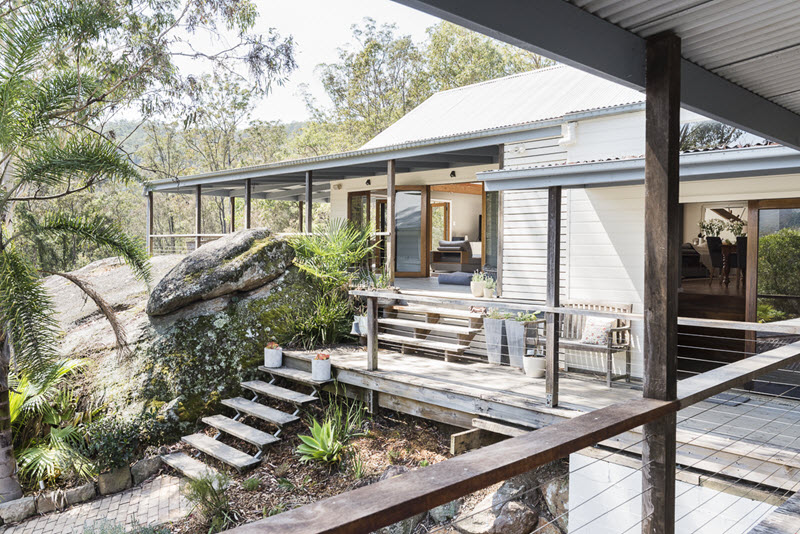 The massive and beautifully formed moss covered boulder that stands proudly at the front of the home is home to all kinds of wildlife and was a major consideration in the design and planning of the home.

“The property has two large boulders, this one and another at the back of the house, that we wanted to incorporate into the build so as they would become as much as a feature as the house itself.

“My husband Michael designed and built the entire house, including the fireplace in the lounge room using eco stone and he actually hand cut the massive sandstone blocks near the pool, he's extremely talented. 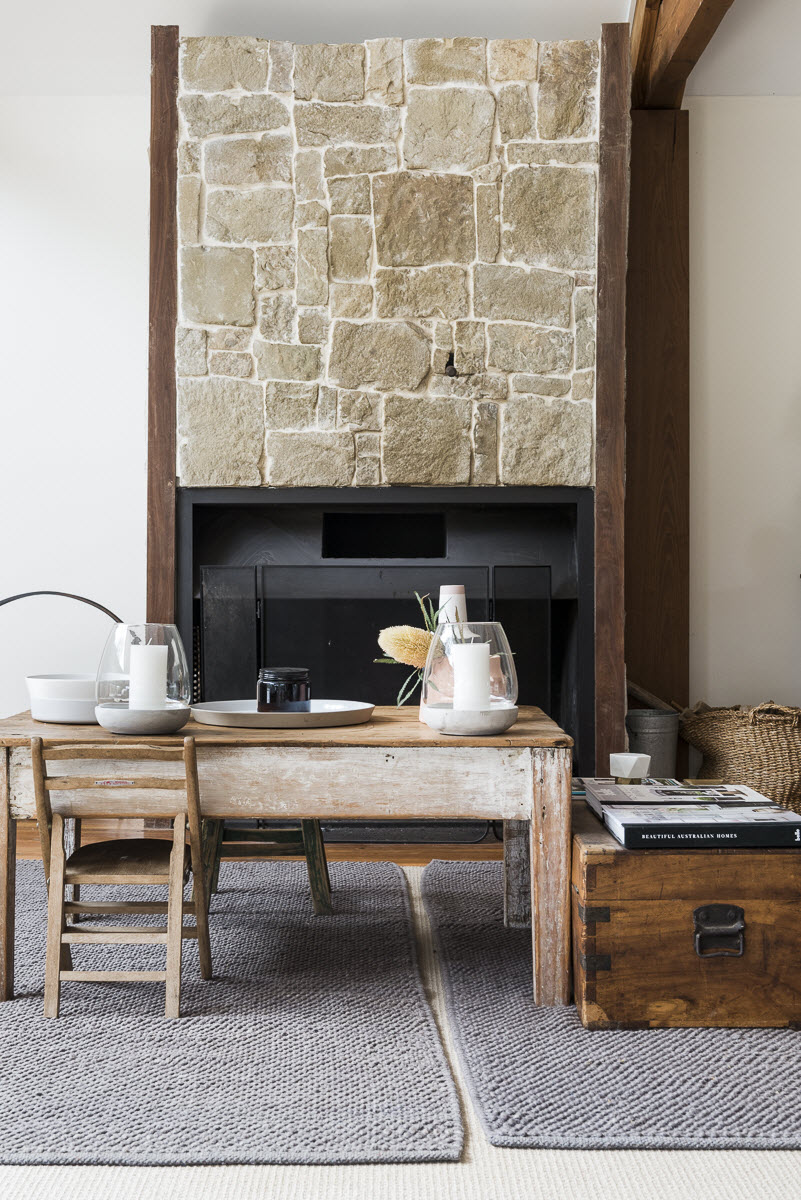 “When Michael was seventeen he used to work at Old Sydney Town and he pretty much learned everything he knows from Mike Hendrickson. He learned life-long trade skills and a work ethic that has driven everything he does.

"Mike lived out the back of Old Sydney Town and he spent most of his life steam bending, wheelwrighting and blacksmithing, as well as being a carpenter. We were very lucky that Mike came to our house and built the stairs and the windows in the downstairs lounge room, he was an amazing craftsman.” 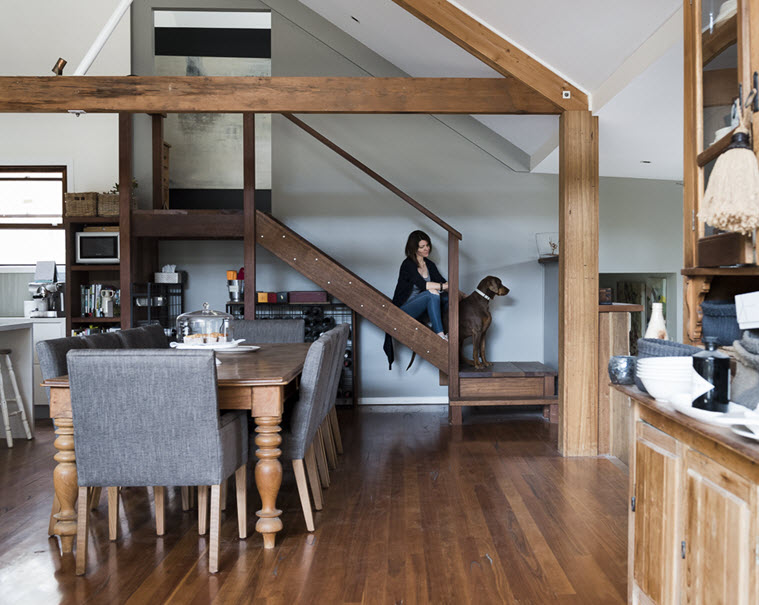 Stepping inside the home the lines between inside and out are, at times, blurred with little native birds freely flying in and settling comfortably on the timber trusses before moving on again. The high pitched ceiling and large bi-fold doors, when fully open, take advantage of the bush setting, giving you a feeling that you're almost living within the bush canopy. 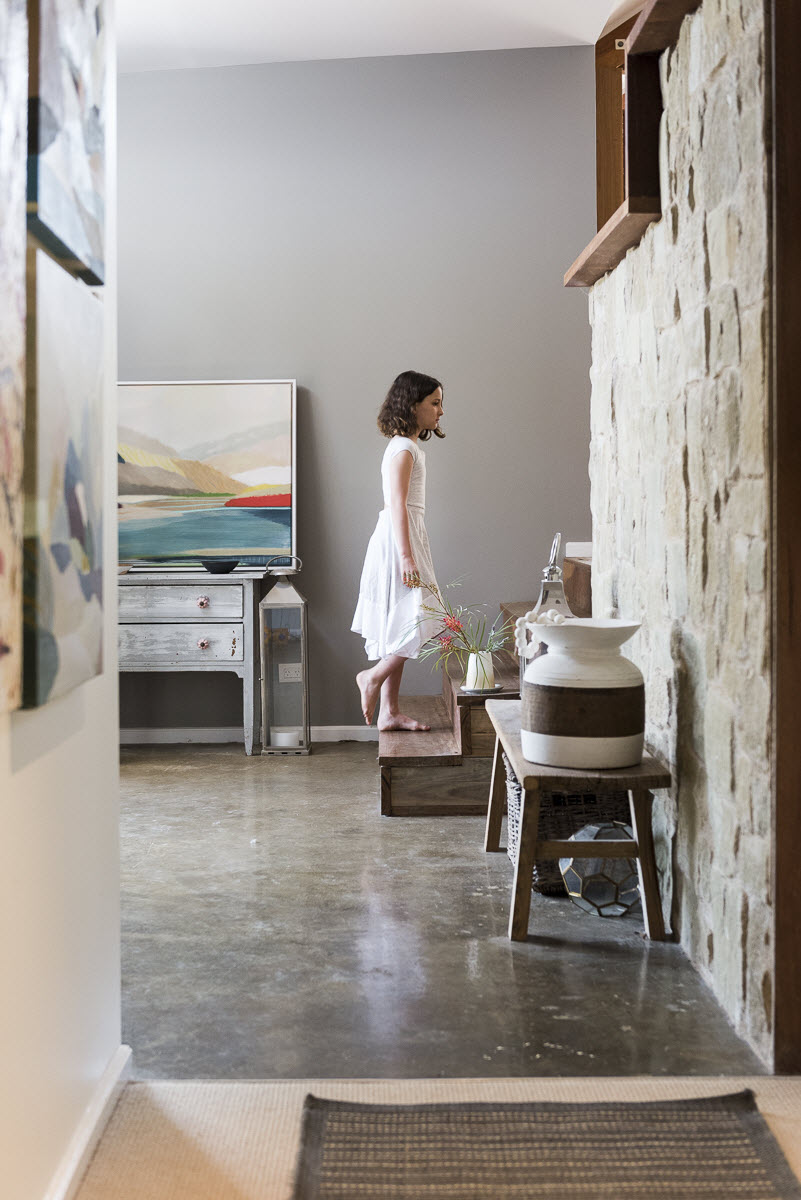 "At the bottom of our property is a rainforest, it’s completely untouched, no one ever goes down there, the girls love it. It’s the beginning of the creek which flows all the way through the Valley and out to the lake, so this is where it starts and there are palm trees and these massive big vines that you can swing on.

"There’s loads of wildlife as well. Sometimes when I arrive home I find a massive goanna wandering around. We also get these cute little green pythons who live around the rock and once there was a massive python in our kitchen. Chloe my daughter was home sick from school one day and didn’t even notice it when she was cooking.

"We’re used to them now, snakes are so shy they don’t want to see you, when they do they just take off." 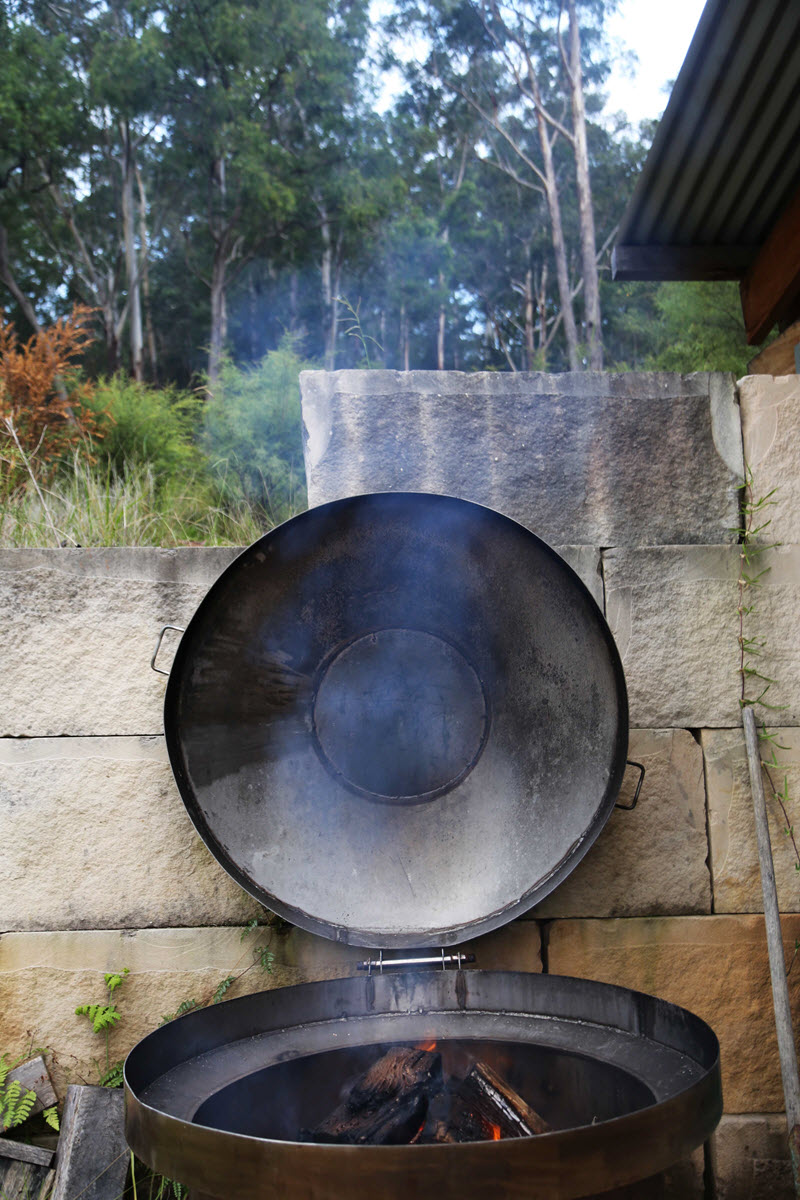 Belynda On Her Career & What Inspires Her Art.

Painting for over 25 years Belynda’s work can be viewed at the Australian Galleries in Sydney and Flinders Lane Gallery, Melbourne. There's also a long list of magazines that Belynda has been featured in like Country Style, Belle, Fete, Inside Out, Real Living and her work has been included in many large events such as Sydney Contemporary and The Design Files Open House.

There's been plenty of career highlights including being a Finalist in the Wynne prize four times and Archibald once, along with the Paddington Art Prize, Mosman Art Prize, Gosford Art Prize and the Tattersals Art Prize to name a few.

"Forever it’s always been this Valley [in my paintings], because I drive so much, every day to school and back with the kids. Then I became obsessed with it, the colours, compositions and textures, even though I am not trying to paint it exactly, it's where all my inspiration comes from. 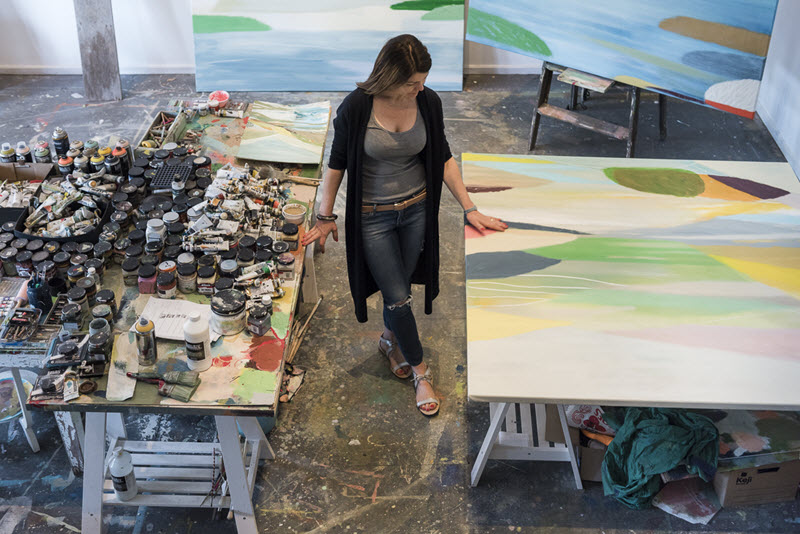 "Over the years I’ve worked on some really interesting projects, like with Jurlique. In January of this year they approached me to come down to the Jurlique farm in Adelaide, where they grow all their products, with their photographer and videographer. The project involved a two-day shoot in a paddock with the idea being that I would draw inspiration from the farm setting.

"My painting that resulted from this visit then appeared on the box of this year’s limited edition Rosewater Balancing Mist. It was an amazing experience and so nice to be recognised as an Australian landscape artist.

"I've also gone through lots of painting styles and phases over the years, like the paper towel phase [Belynda laughs]. I am about to start on a new body of work for my next exhibition with Australian galleries in Sydney, June 2018. I'm planning on creating some sculptural pieces to support the paintings."  To view more of Belynda's work click here. 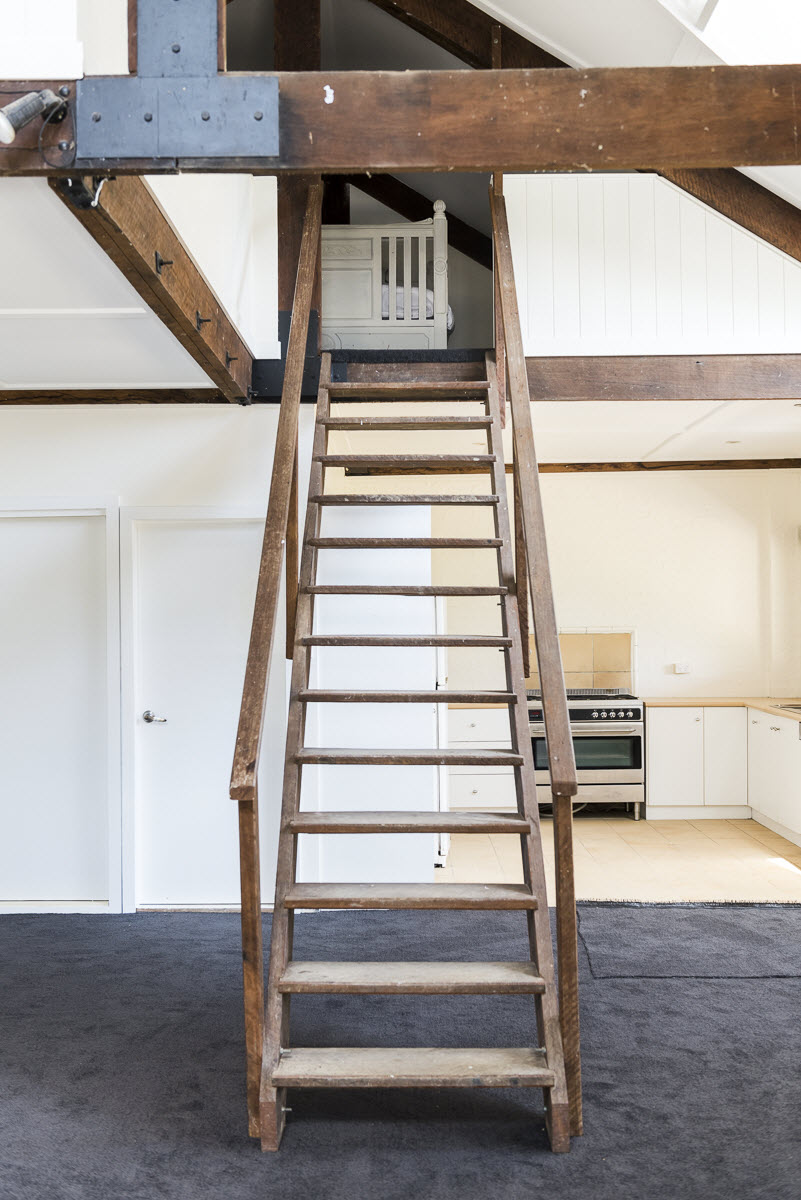 "The house has been a 17-year long project with both daughters born and raised in what we like to call an evolving home. It's very special and we love the total seclusion it offers, whilst still being only 40 mins from Newcastle and the Hunter Valley.

"However after 17 years we have decided to move on, selling the house and purchasing a block of land not far from here. Now we're looking forward to our next house build and a new separate studio, it's going to be the next stage of our life." 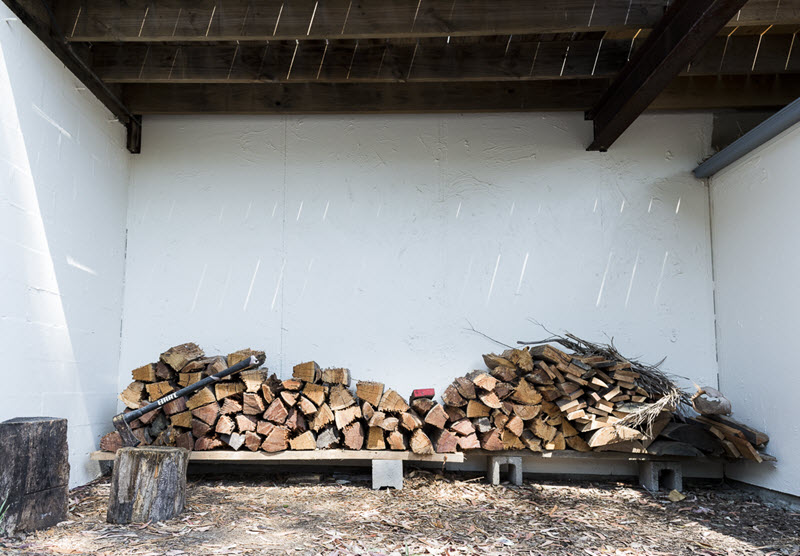 Ange chats to us about her beautiful Carrington home & living small