If you’ve ever wandered the stalls at the Olive Tree Market, or if you’re a lover of buying local children’s literature, chances are you may have come across the ever-so-talented illustrator, Beau Wylie, and his creative and colourful characters. 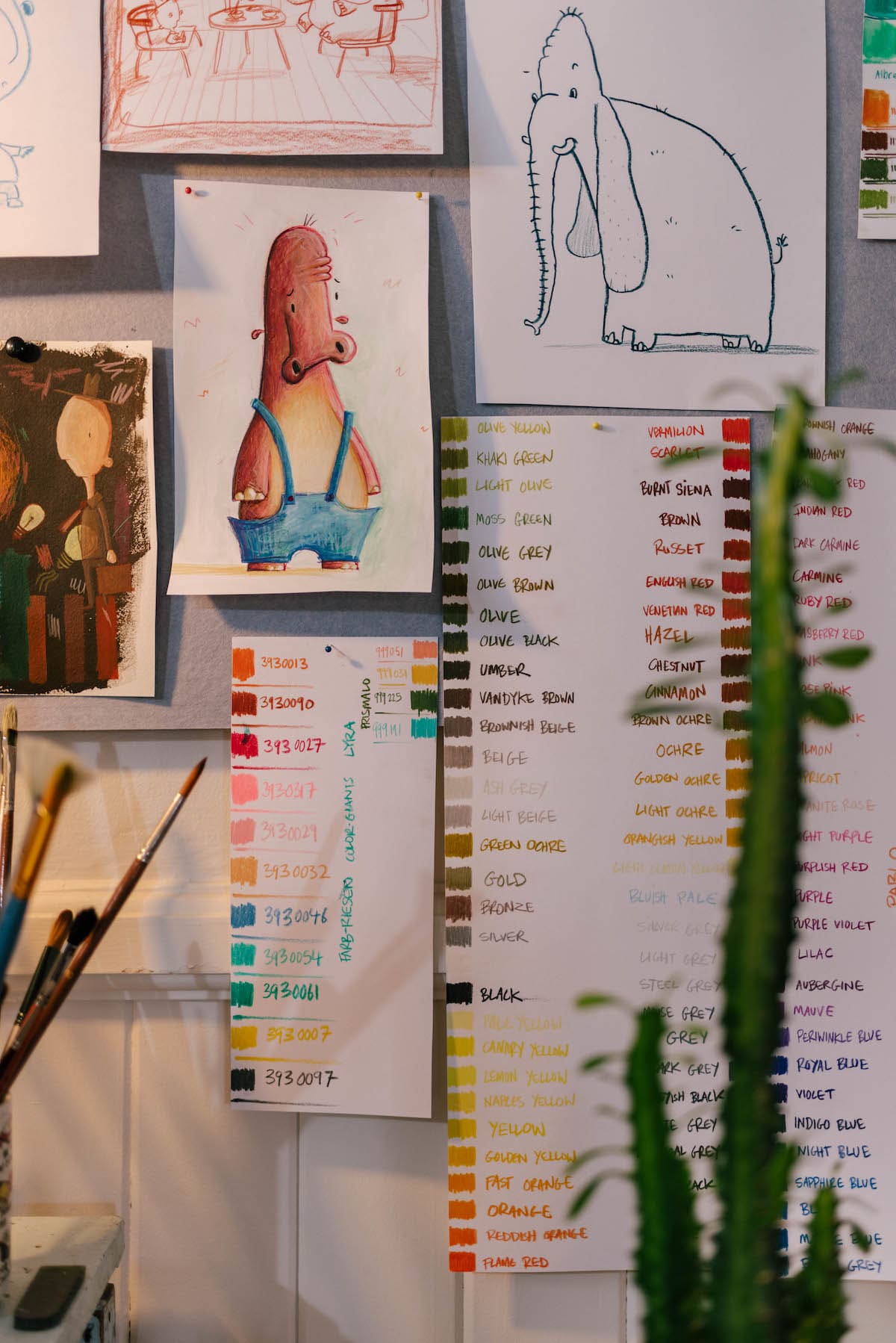 Pursuing a Fine Arts degree at the University of NSW, with a major in video and performance, as well as further studies in architecture; would you believe it was actually the architecture degree that gave Beau the idea of pursuing a career in art?

“I went to art school and studied video and performance and I finished that, worked in some galleries and it sort of just fizzled. From there, I actually ended up studying architecture for a couple of years. In the architecture degree, they make you do a lot of drawing, and with a lot of details, but then would also teach you how to do really quick drawings to get ideas down. Weirdly, it was in the architecture degree, rather than the art degree that I realised I could do illustration,” Beau said.

Working on creating his own prints, Beau started selling his work at the Sydney favourite, the Finders Keepers Markets as well as occasionally visiting us here in Newcastle at the Olive Tree Market. 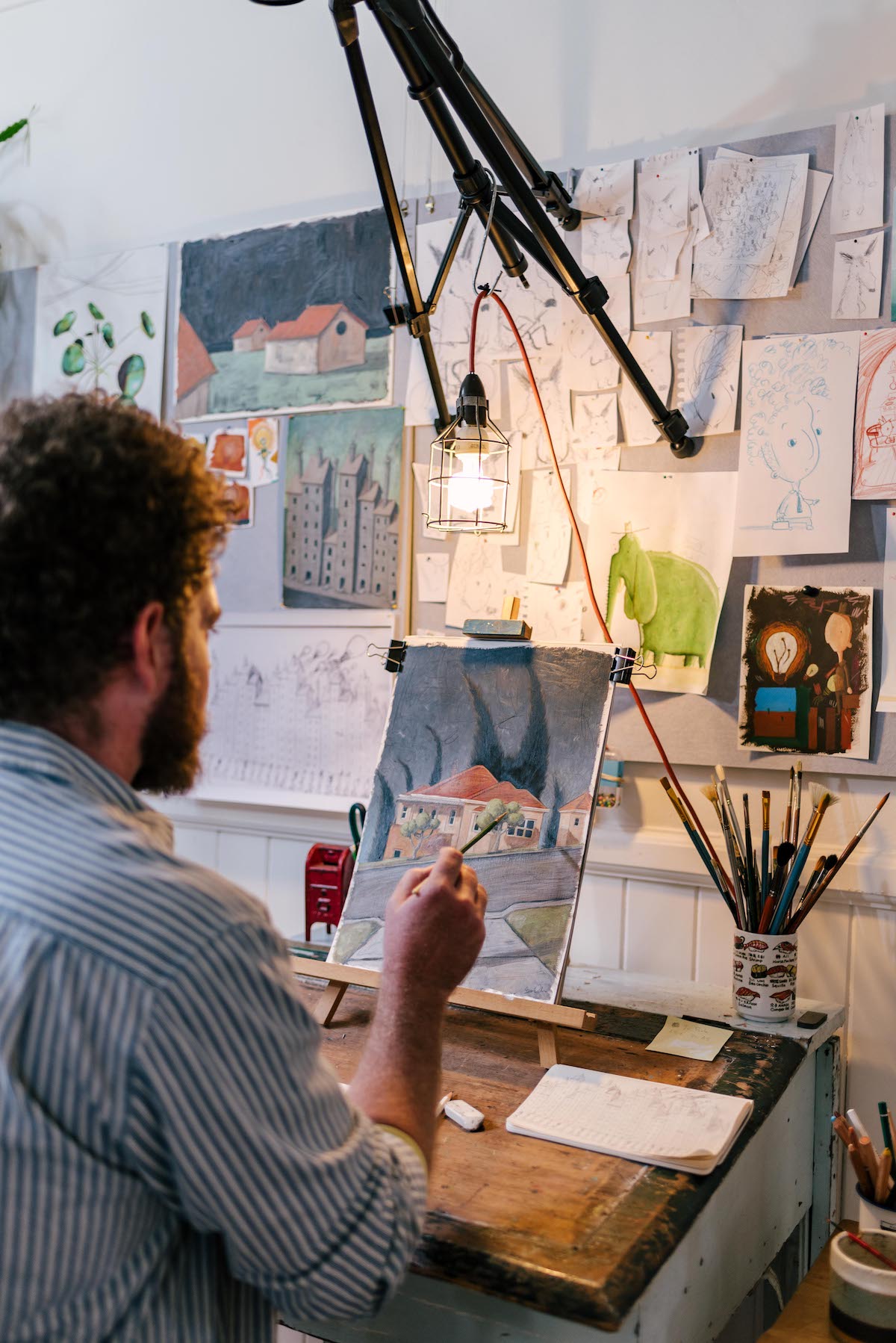 Originally from Sydney, it wasn’t until late 2016, that Beau and his wife, Bianca moved to Newcastle. With Beau having visited for the markets, as well as coming up for This Is Not Art festival and Electrofringe, the transition was made much more smooth.

“We really love Newcastle. It’s really relaxed and pretty. It’s got all the things that I like about Sydney, but there are just fewer people and less anger. It was a no brainer moving here because I can really work anywhere.”

Whilst he’s been mighty popular over at our Olive Tree Markets with his artworks and cards, his passion was to always work on and create children’s books.

Partnering with friend and author, Pip Smith, the pair worked on and created their first children’s book; Theodore the Unsure.

Following the story of King Theodore; ruler of the whole animal kingdom. Theodore’s mane keeps growing and growing and he must decide whether to cut it or keep it; Theodore is always so unsure! Readers can follow his ups and downs and meet the quirky characters along the way.

“We came up with the story during the time they were talking about the referendum for gay marriage, and how the government was being really indecisive. At the time, I’d also started a poll online about whether or not I should cut my hair.

“Pip is a really great writer, and she came up with that story from there, and it took a few years back and forth. We pitched it a bunch of publishers and all of them rejected us except for Scholastic who picked it up. It was a steep learning curve.”

We think Pip's words at the front of the book say it all.

“To leaders who live in the sun: may your hardest decisions be guided by those most exposed to the cold.” - Pip Smith 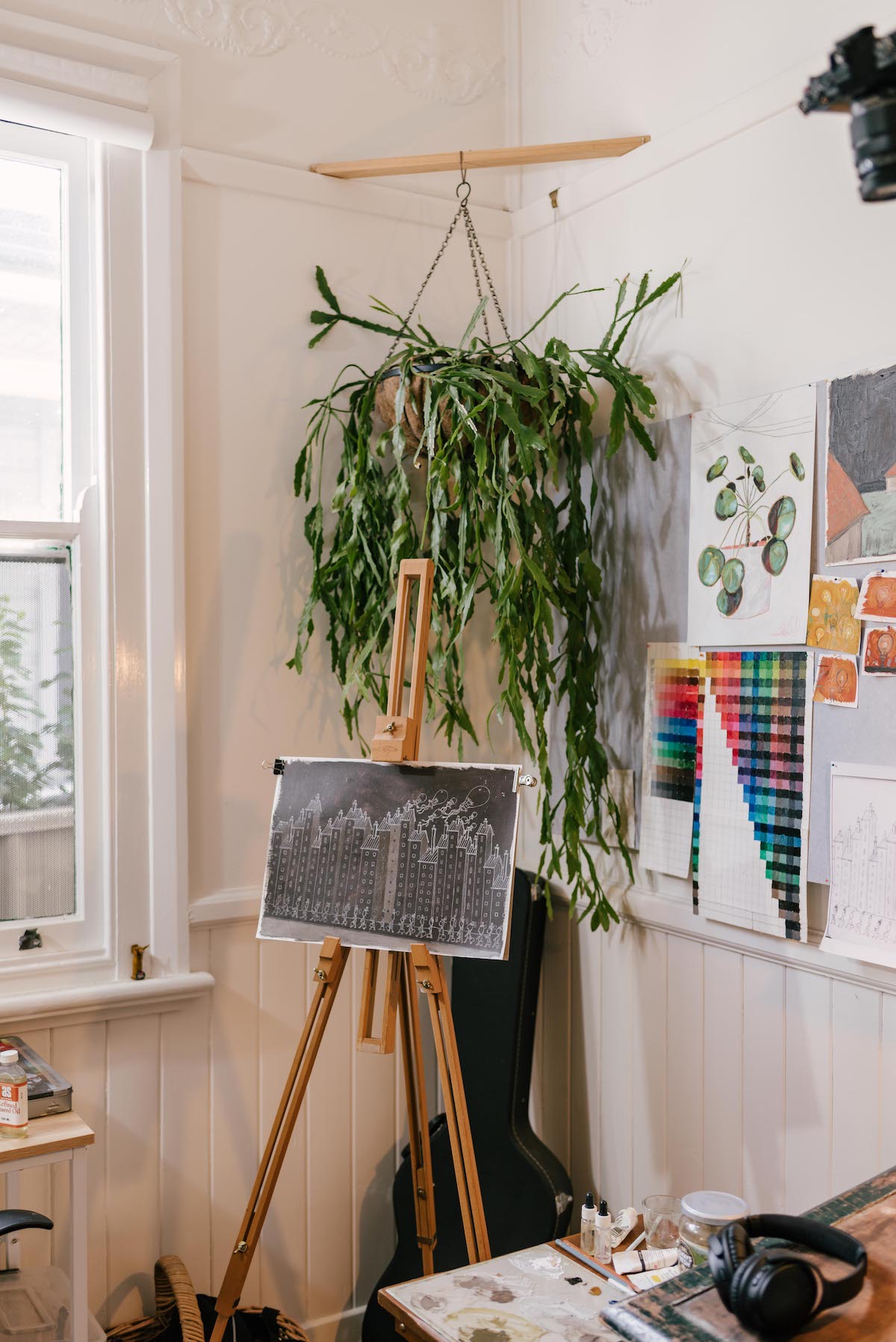 After four years of working on the book, Theodore the Unsure was published in August last year and has been lovingly received in the homes of young families across the country.

Getting a taste of what to expect when it comes to producing a book, Beau has been busily working on a number of projects including a new book, To Greenland, working once again with friend and author, Pip Smith.

“It’s about a little boy or young man that lives in a really dull world and dreams of more exciting things. There’s this luminous green elephant that takes him on a journey to a fanciful world called Greenland. It’s going to be really great for the illustration opportunities because Pip leaves it really open-ended for me. I’m really excited about this one!”

Like most of the arts community, Beau hasn’t gone unaffected by the COVID-19 pandemic. Beau had been working out of the local co-working arts hub, Onwards Studio, but with the arrival of Beau & Bianca’s son, Manny earlier this year, Beau has temporarily moved his workspace back home. 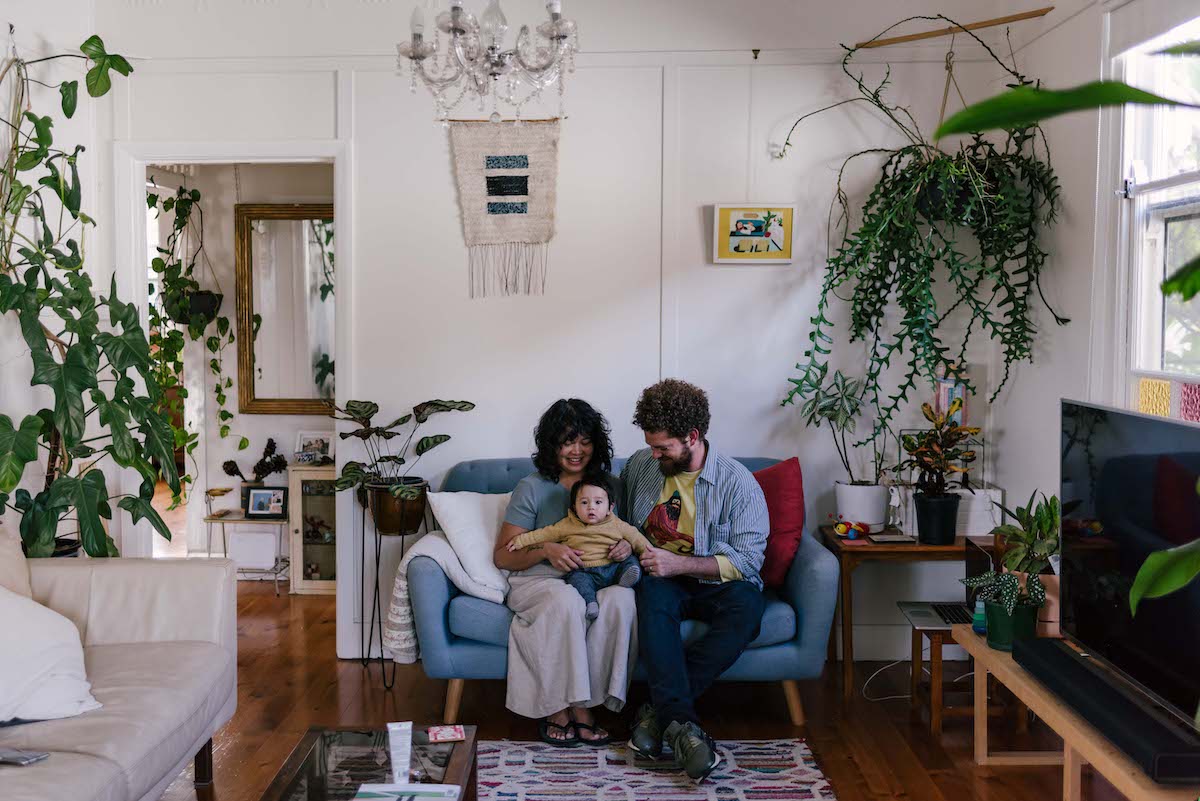 “I originally joined Onwards because I was alone at home because Bianca was at work and we didn’t have Manny. But I was just going nuts. I’m not a super social person, but it was almost too easy to be alone working, and I was doing everything super slowly and was pretty uninspired. So, going into Onwards, you knew there were always people around.

“Having other people around you that are doing stuff. You see them working hard and you think, I should start working hard. Onwards is an awesome space and I really want that space to stick around. But everyone who was working from that space has been affected by this, so that space is kind of at risk.”

Looking towards the future, alongside To Greenland, Beau is also working on another book (top secret so we can’t tell you anything about it yet), as well as creating new print works available on his online store and dreams to continue working on as many books as possible. 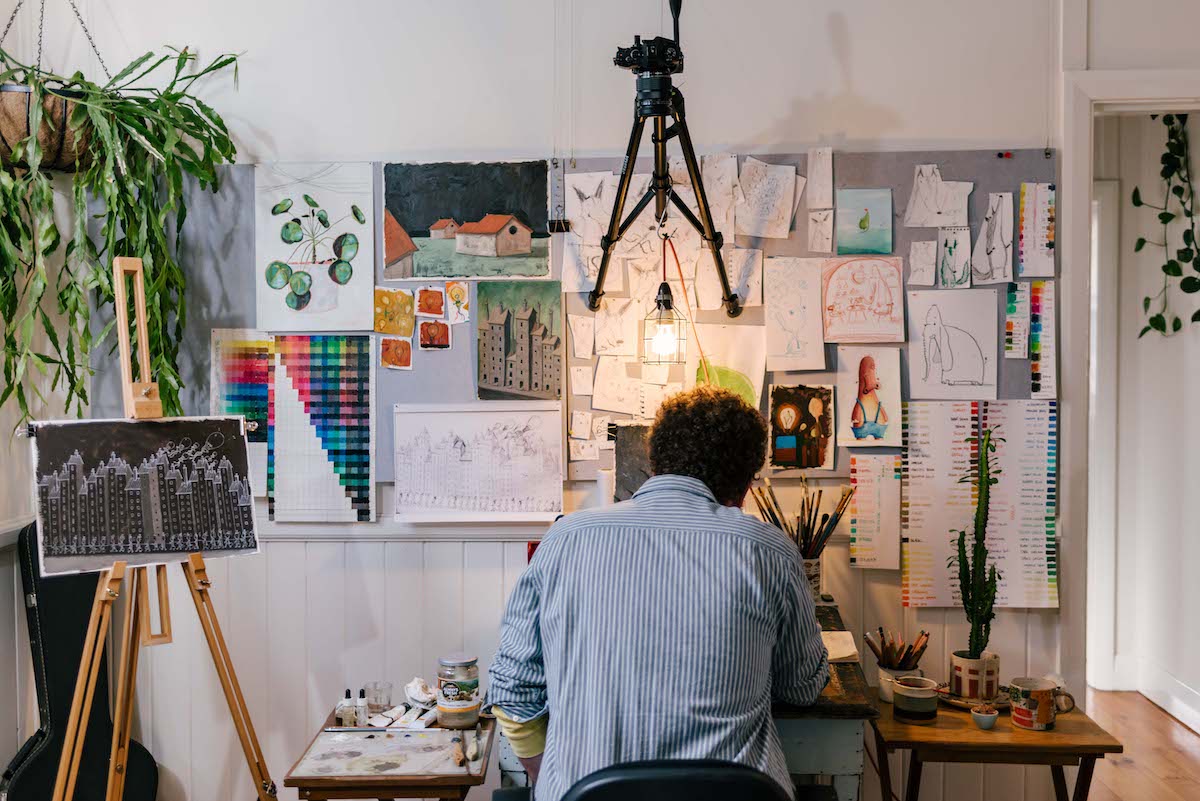 “I’d like to just be consistently working on books really, as well as being open to doing other things like murals for instance. I had the goal of doing kids books, and now that I’m sort of in the middle of that, I don’t really have another goal in front of me other than just doing what I’m doing but doing it better. I think that will go other places, but I’m open just letting that evolve organically.”

Manager of Screen Hunter and Director of the Real Film Festival

At home and in the studio, with a talented Mayfield artist