The house that love built.

The design brief for the home of Jacqueline and Andrew Harvey was so extensive, they feared they were asking for the impossible. After two years of searching, Jacqueline and Andrew found the ideal block on which to build their family home in Bar Beach. With two pre-teen daughters and one teenager daughter, they needed a home to grow into.

Many of the requirements for the build were somewhat non-negotiable as they had a very special motivational factor: their daughter, Fenne, who was in a wheelchair and suffered from noise sensitivity. Their other two daughters, Erin and Bridgit also needed their own space where they could retreat and study, Jacqueline explains,

“We engaged Simon Frost from Habitus Group. We gave him such a long list of requirements, including wide hallways, wide doorways, space for everyone, a gym, a lift, hydro pool for Fenne and separate living areas so we could entertain, that we thought it would really limit him in terms of what he could do."

"Simon ended up going way above and beyond our expectations. It took three designs and 18 months to obtain DA approval and then the building work was completed within 12 months by Ryan Barnett and the team at Hercules Building.” 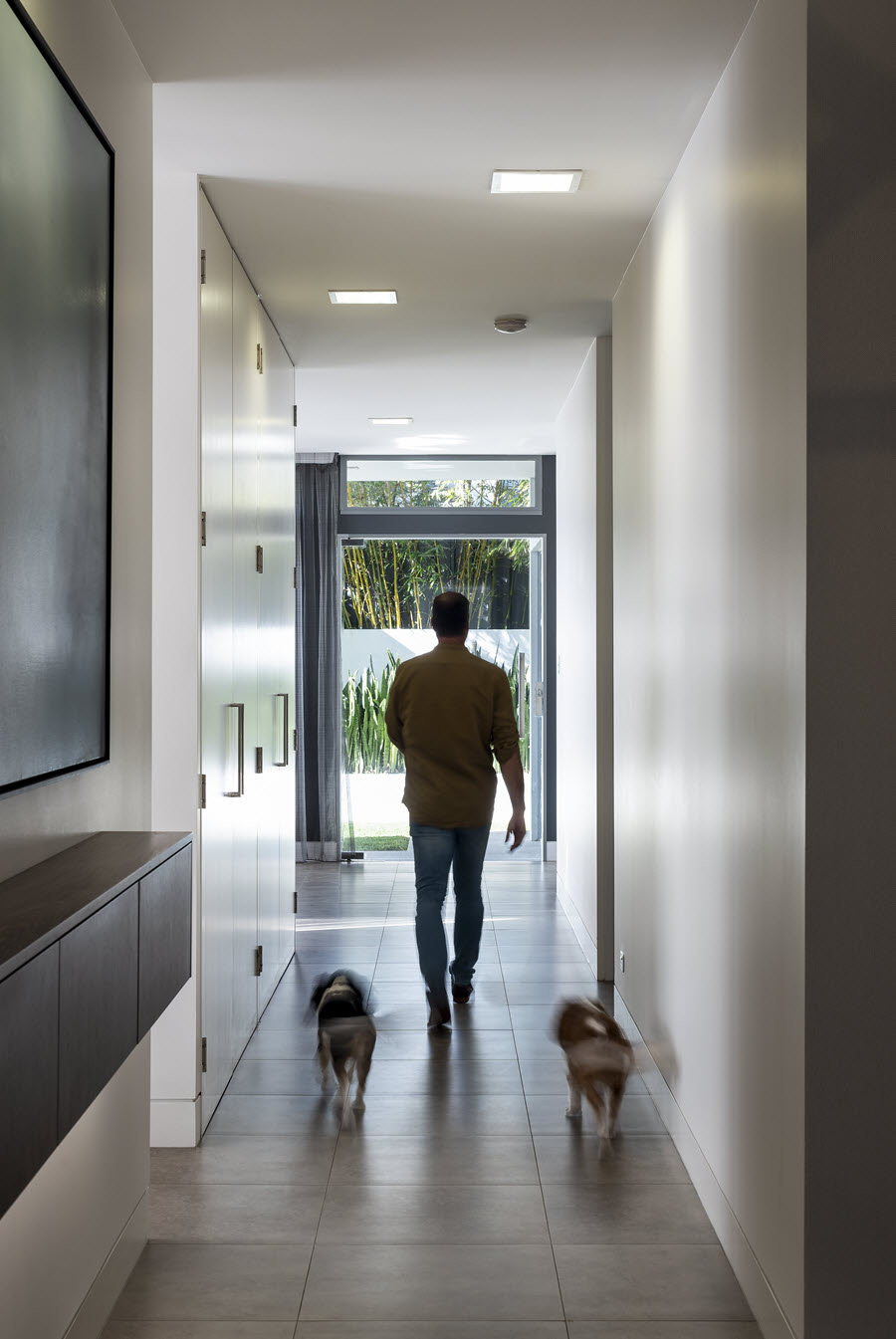 I meet Jacqueline, Andrew, their youngest daughter, Bridget and their three adorable King Charles Cavalier dogs; Ollie, Dolly and Fred at the impressive floor to ceiling glass front door. With 4m high ceilings at the entry to the home, this is a sign of the scale to come.

The design touches throughout are all deeply personal to its owners. First and foremost, were the considerations taken into account to create a beautiful and functional space for Fenne.

The design is defined by a high level of refinement and sophistication through a few design principles that are repeated throughout all parts of the home. Consistent proportions, harmony, repetition and a play with contrasting textures are the governing design principles.

For example, the neutral colour palette that has been consistently implemented throughout the house creates the perfect backdrop for the family’s carefully curated, beautiful collection of artworks and objects from their travels. Jacqueline drew much of her inspiration from Dutch designer Piet Boon whilst designing her interior. 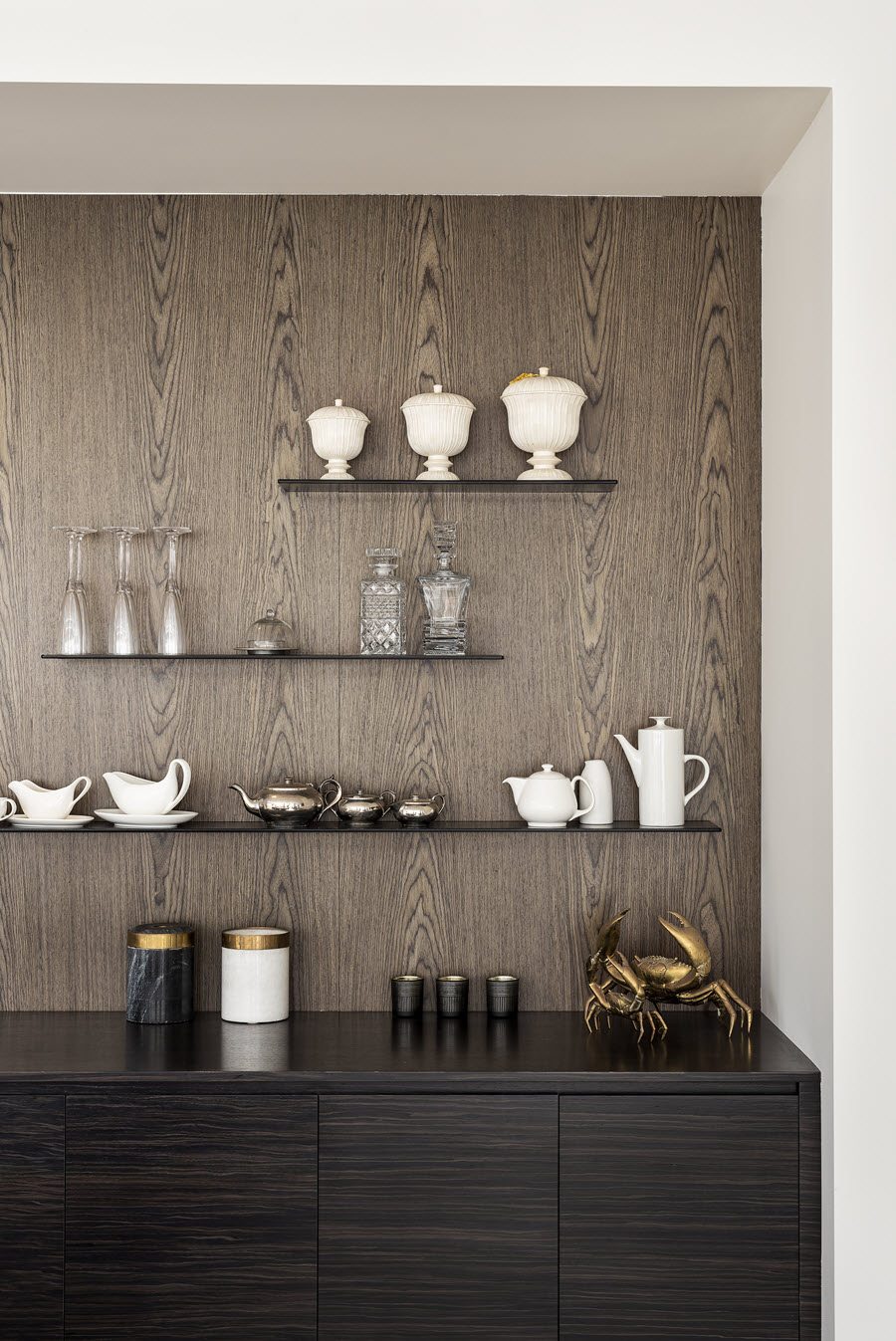 Jacqueline, what is your starting point when it comes to designing a beautiful interior?

“We start with the floor plan, then collate inspirational photos, and then the flooring. The inspirational photo for this design came from Piet Boon, one of my favourite designers in The Netherlands. In terms of the colour palette, I always start with the flooring and go from there. I like to stick to a neutral palette, where I can play with the depth of shade and texture. We wanted to create a coastal feel without being rustic. Our vision was more of a polished, luxe design. We needed tiles that were easy wear and tear so once we got the flooring it all came together. By using a consistent colour palette and playing with textures, each room has a connection to the previous, without it being all the same.”

Texture has indeed played a large part in the success of the interior of this home. For example, Jacqueline has cleverly used a textured white wallpaper on some walls as a subtle departure to plain white, in order to enclose the space so it doesn’t feel so vast.  Texture has also been used as a tactile element with a leather-wrapped stairway banister, which was crafted by a shipbuilder by commission.

Lighting is another element that Jacqueline uses masterfully as a tool to create warmth and atmosphere.

Jacqueline explains, “I always use two or three levels of lighting in each room. I’m not a fan of task lighting. There is no overhead lighting in the master bedroom, we’ve used low lights along the hallway which are on a motion sensor and there is only one overhead light in the sitting room. I much prefer ambient lighting. Lamps add colour and texture and bring everything together.” 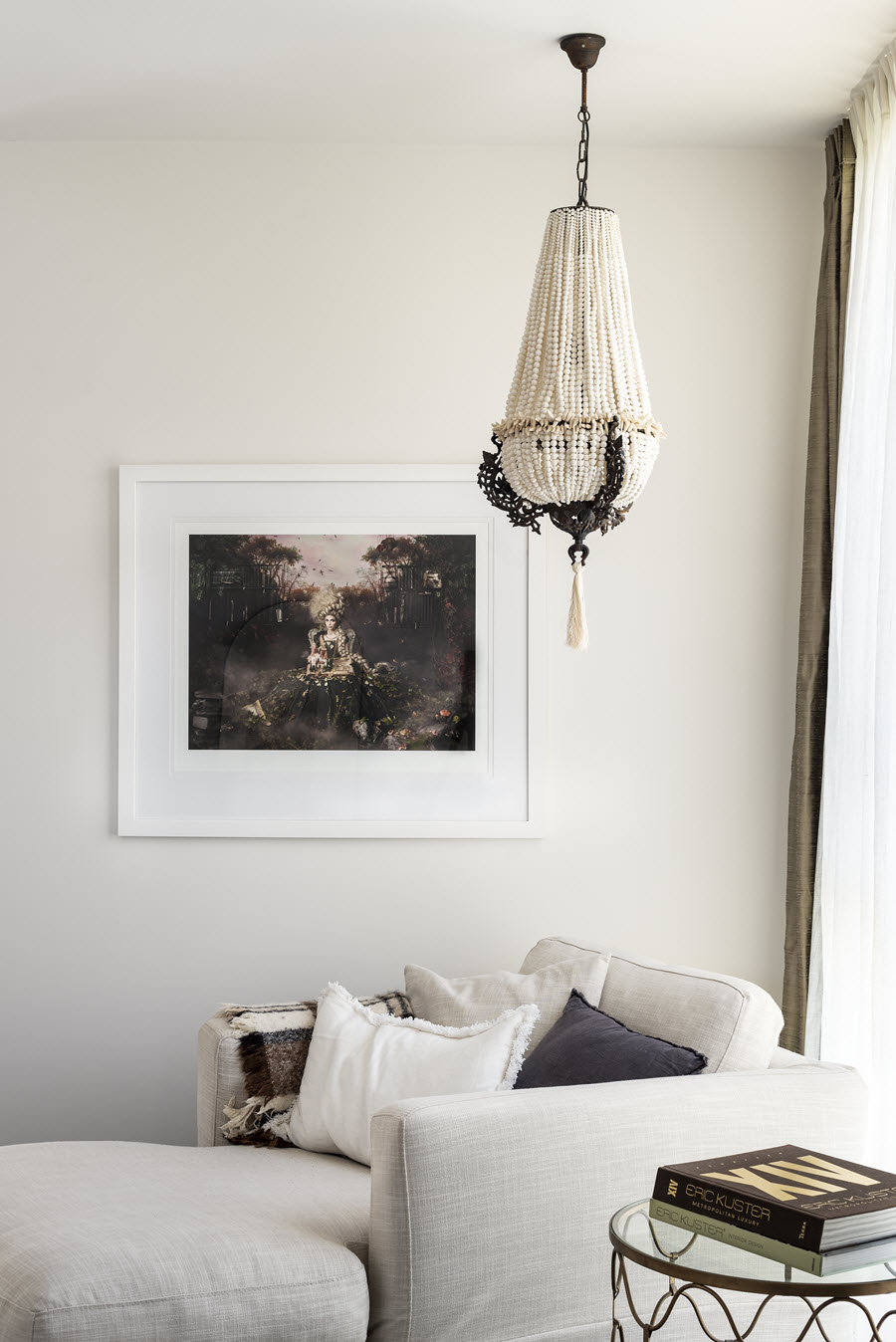 Jacqueline and Andrew have added individuality to each room with dramatic chandeliers and pendants. Twin Murano chandeliers hang in the butlers’ pantry; a pendant from Spain hangs in the living room and Andrew’s favourite, a restrung antique coral chandelier from Manyara Home in Mosman, hangs as a focal point in the master bedroom. 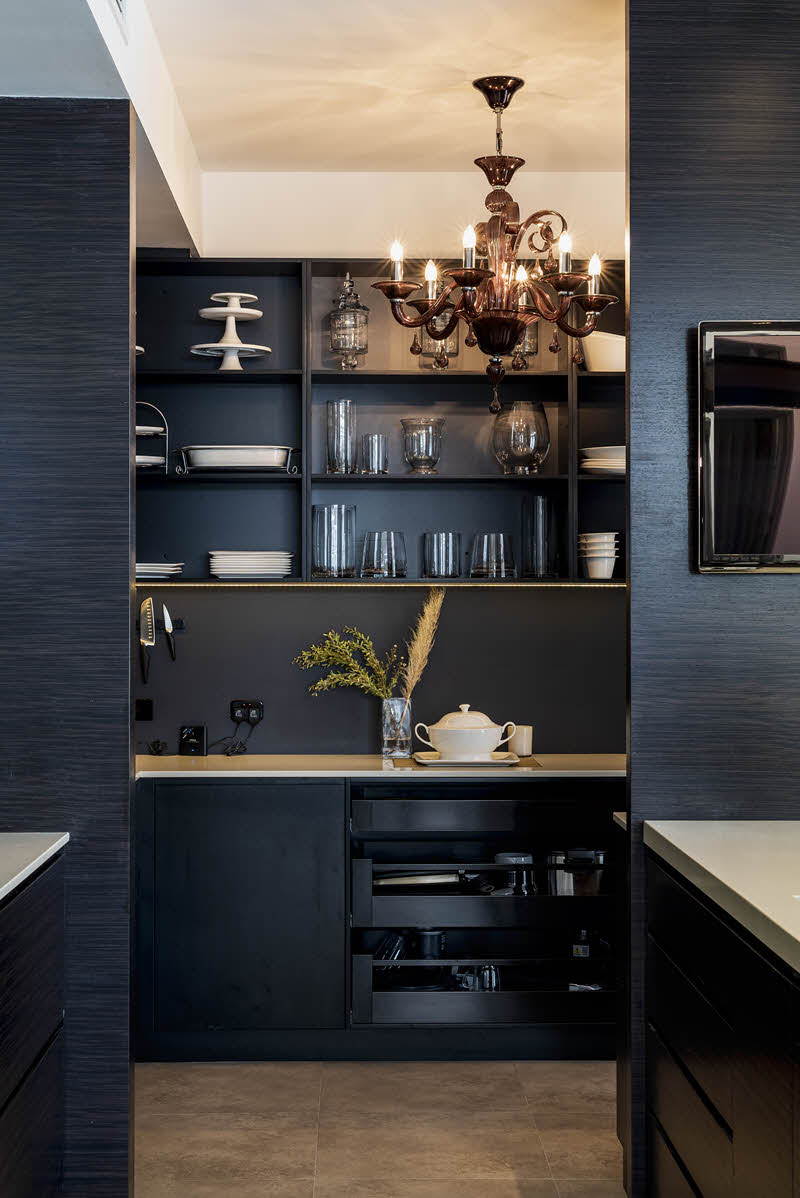 Bespoke details such as panelling on the walls of the girls’ bedrooms and the floating shelves on the dining room wall are subtle references to Jacqueline and Andrew’s love of travel. A custom tile mosaic mural serves as a backdrop to a freestanding bath in one of the four full-sized ensuites. Designed in collaboration with Louise Constable from Nest Interiors and Di Lorenzo tiles, the mural features birds that reflect the wallpaper in the adjoining bedroom and features turquoise and gold leaf tiles. 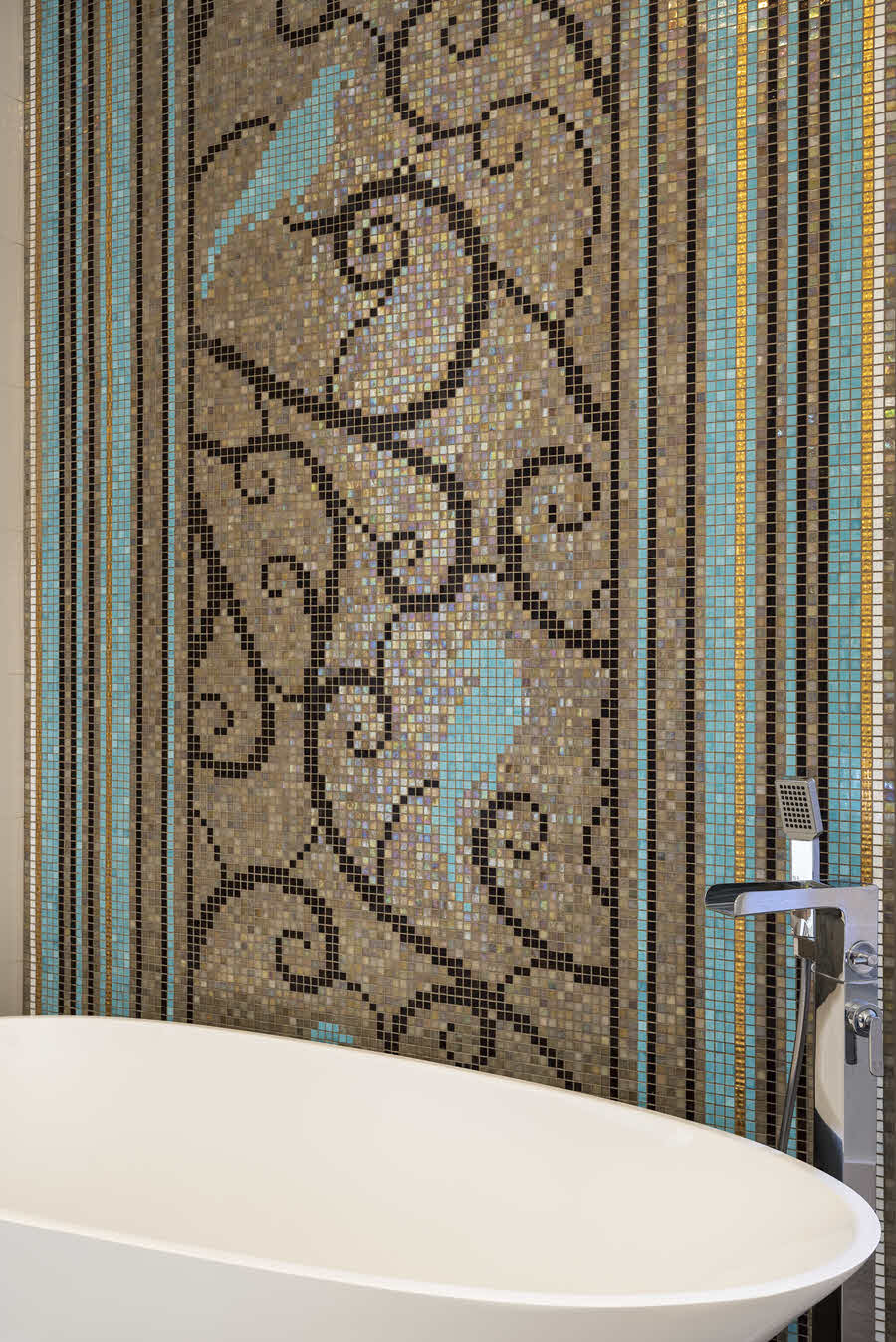 The kitchen, built by Latham Kitchens, also reflects the scale of the home with dedicated areas for food prep, cooking and gathering and plenty of room to accommodate Fenne’s wheelchair and her carers. Two replica Hans J. Wagner Circle chairs sit between the kitchen and the dining room, with the lap pool as a serene backdrop. 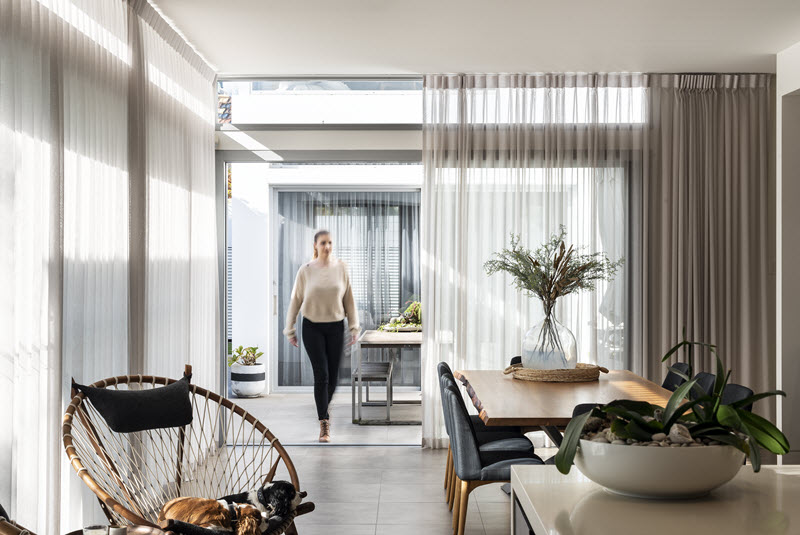 In testament to the fact this house was built with all family members in mind, perhaps it was not surprising when I asked both Jacqueline and Andrew what their favourite rooms were, that both differed!

Jacqueline said without hesitation, “Definitely my sitting room upstairs. The house is built on such a large scale, whereas that room is just a little bit cosier and more of a retreat. We used low windows so when the kids were younger I could sit upstairs and watch the kids in the pool. It was a change that was made after the framework had gone up but I’m glad we did it.” 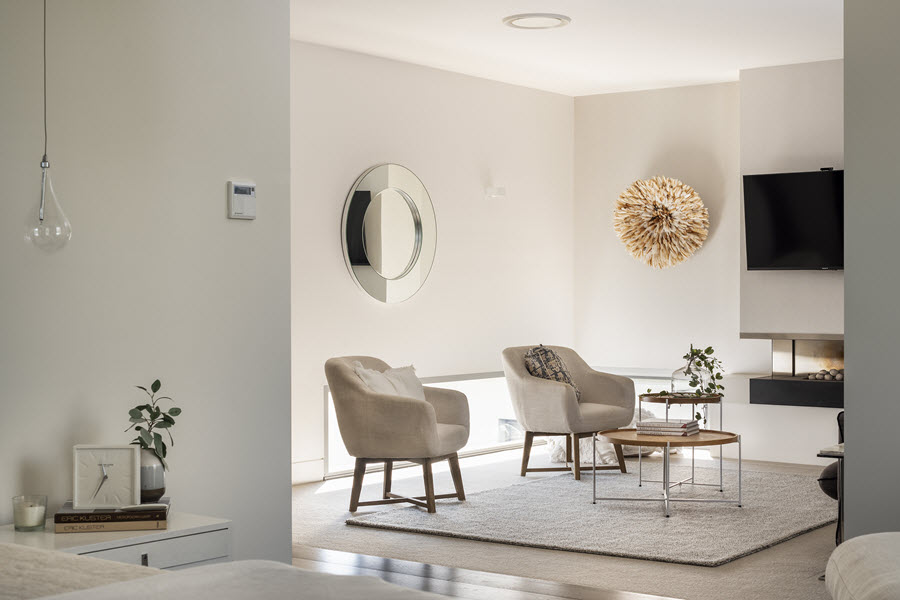 It’s easy to see why Jacqueline loves this room so much. With its open fireplace, wall mounted television, beautifully curated floating shelves and plunge worthy seating from Provincial Living and Habitat, this room is incredibly inviting. 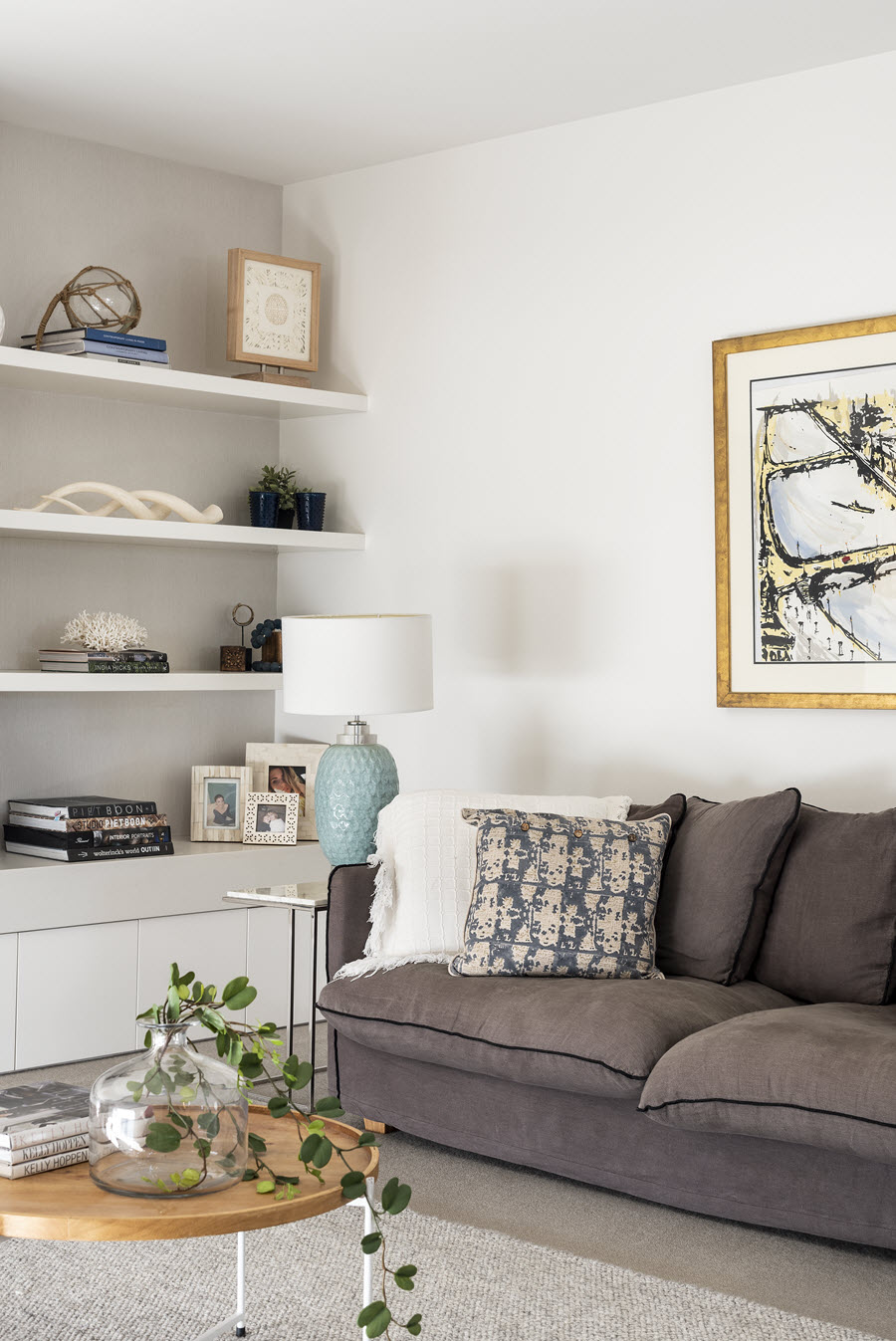 Andrew’s favourite room is all about lifestyle, entertaining and fun. This has to be the entertainment hub of the home. An upstairs living room complete with custom made pool table from Ball Sports, Melbourne; bespoke bar; kitchenette; and a sumptuous leather lounge large enough to seat a crowd to watch the weekend game of footy. Framed album covers of his favourite bands, including The Cure, Beastie Boys and David Bowie adorn the wall that leads out to a covered entertaining deck. 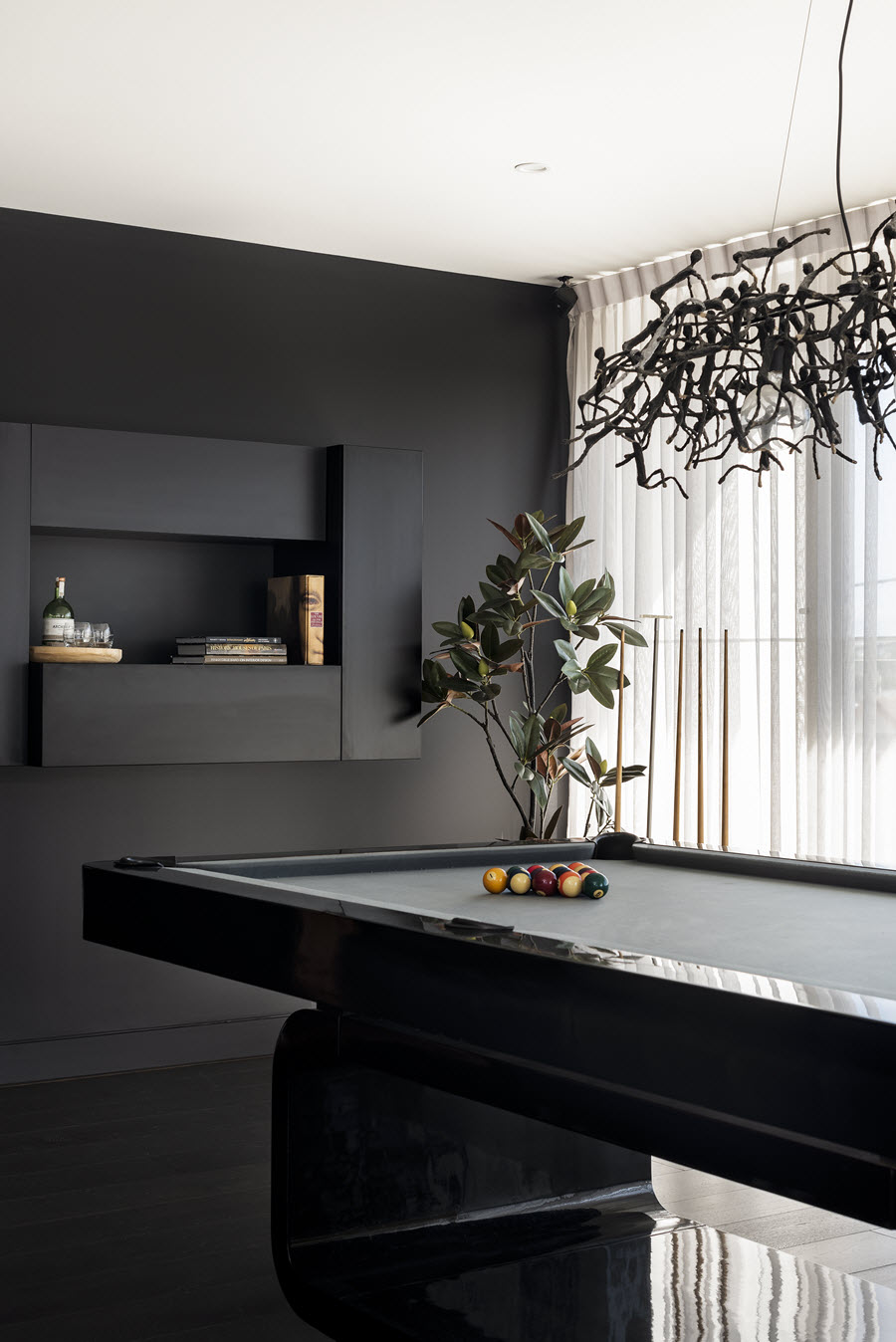 “The deck was the finishing touch to the house”, Andrew says.

We were selling a coffee machine and the guy who came to buy it happened to be a young architect named Basil Bullock who had followed our build as part of his uni degree. He asked if he could look around the house and when we got to the deck we explained that we hadn’t finished it yet and it needed a roof. He asked us if we’d mind if he had a go so we said yes! He designed an opening closing roof that is suspended from beams, giving it the illusion of floating on air. We really love it.”

Beyond the deck is a low maintenance rooftop garden above the garage, designed and planted by Lush Grow.

Whilst luxury and opulence are words that come to mind when describing this home, Jacqueline is a savvy and experienced researcher when it comes to getting bang for your buck. For example, cabinetry in the dressing room to the master bedroom was originally quoted at $20,000. However, Jacqueline and Andrew chose to use Ikea wardrobe systems which saved them a massive $16,000. They have not had to compromise on anything, with soft-close drawers and organised storage for all wardrobe essentials accounted for. 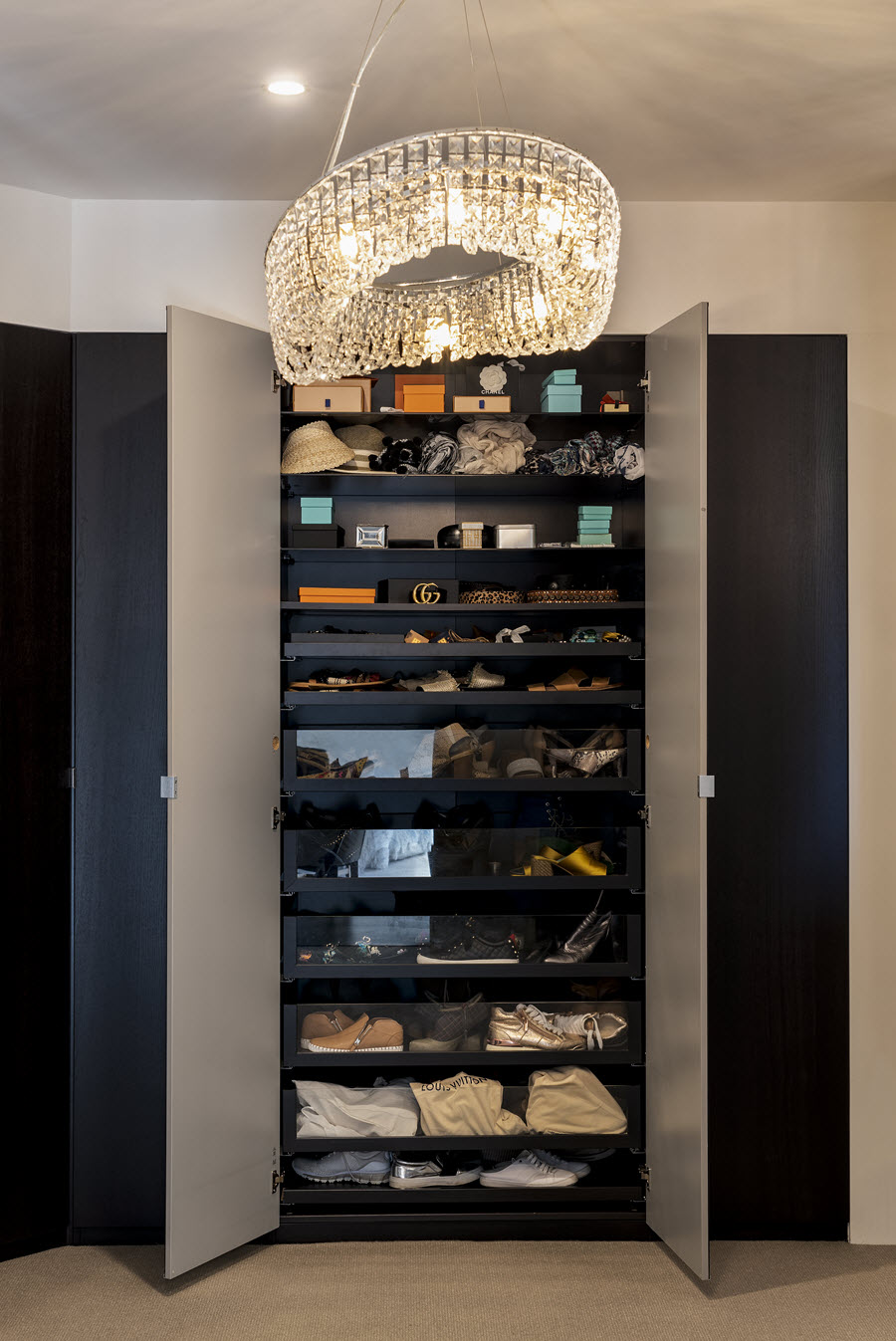 For the fitness lovers in the home, there is the home gym which opens to a 20m lap pool to cool off after a workout.

It’s not all about aesthetics and functionality. This house is also incredibly energy efficient, with intelligent design including cross flow ventilation, underfloor heating, 18 solar panels on the roof, insulated walls and ceilings and two 5,000l water tanks underneath the garage. It would seem no stone was left unturned in the design of this very special and unique family home.

Want your home featured in House Proud? or do you know of a beautiful home that is in need of sharing? To be considered please contact our House Proud Editor, Julie Kosy for more details at - houseproud@hunterhunter.com.au

An education in design, inside the McGrath's home