Flowers that have meaning to your life and are sustainable, not just your traditional teddy bear and wine florist, something a bit different. I think this is where the dried flowers really come into it, because people are like wow, they are recycled flowers that are amazing

Early 2019, HUNTERhunter hosted its very first event; The Dessert Bar, where Morgan Kerr of Valenteen brough a pop of colour and some floral designs. So, we caught up with Morgan to hear all about Valenteen and her floristry plans.

How did you get into being a florist?

“It was a combination of by chance and fate. I was working with a friend of mine who was dealing with flowers at TAFE and I was studying marketing, I started to get bored so I thought maybe I could do flowers as well. Once I started doing it, I was like wow this is fun, I’m actually making something, not just sending emails. Then I met all the girls from maker and started a business by mistake, but I think that was fate because it's so amazing. It’s pretty random, but it just worked.

“It kind of feels like it was meant to be because it’s hard to think what I even did before flowers. Originally, I did my business degree and I thought I would work in marketing and climb the corporate ladder and wear a suit. But now I’m like no! I want to have dirt in my nails and be in the bush foraging.” 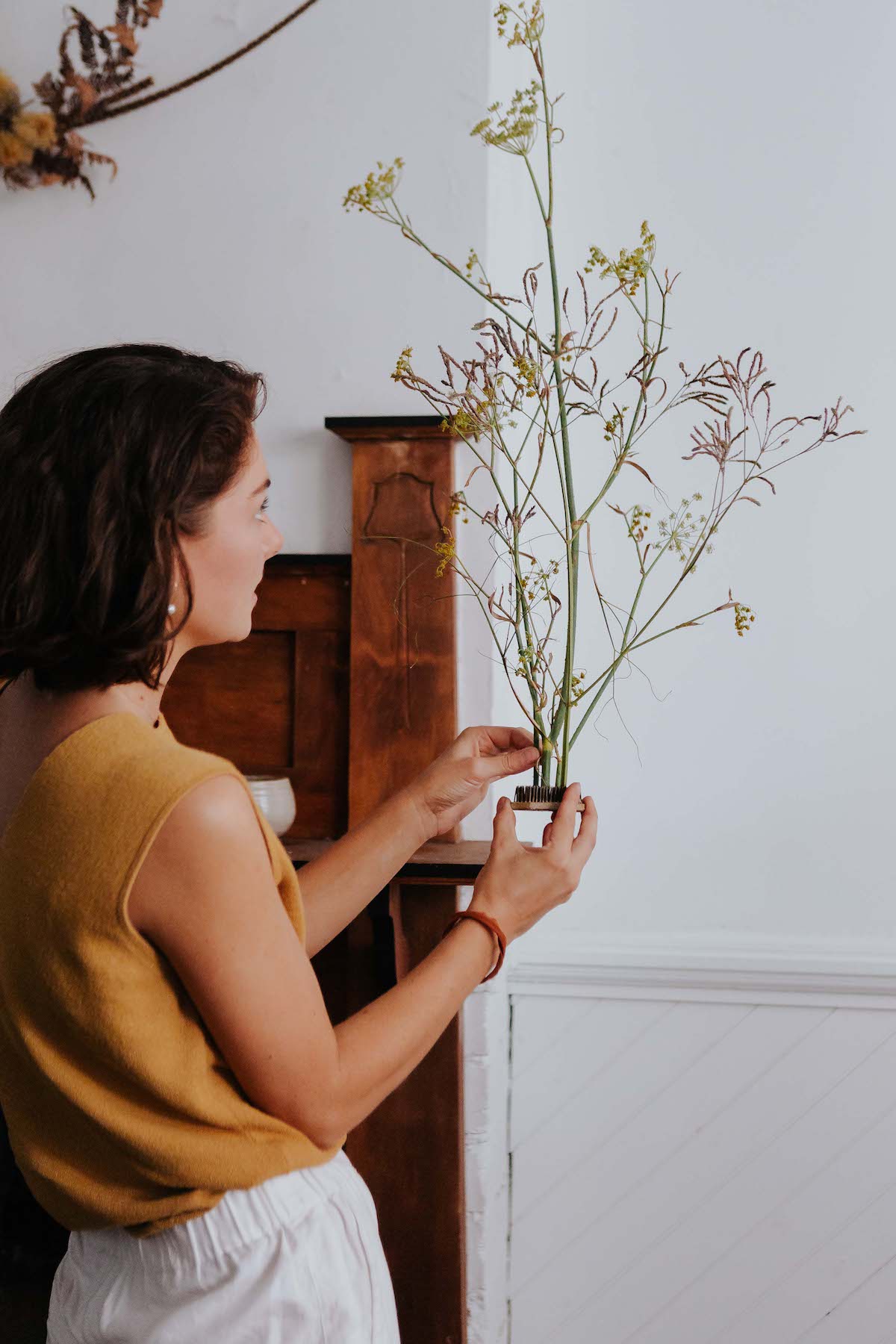 Did you study floristry?

“I am halfway through a Cert 4 in floristry, one year to go. The course is interesting but I’m trying to do things a little differently. I don’t want to just be a florist you get flowers from. I want to make a dried special arrangement for someone that becomes a centre piece on a table for a couple of months.”

What does the name mean?

“Valenteen. It did come out of the blue. I didn’t really know what I wanted to call the business, I just knew the feeling I wanted it to be. And when I thought about the feeling, I was like they would be a warm personality and a lot of texture and wake up in the morning drinking lots of tea. So I kind of made a person out of it and I thought it would be nice to have a name, so yeah, I gave him or her a name. 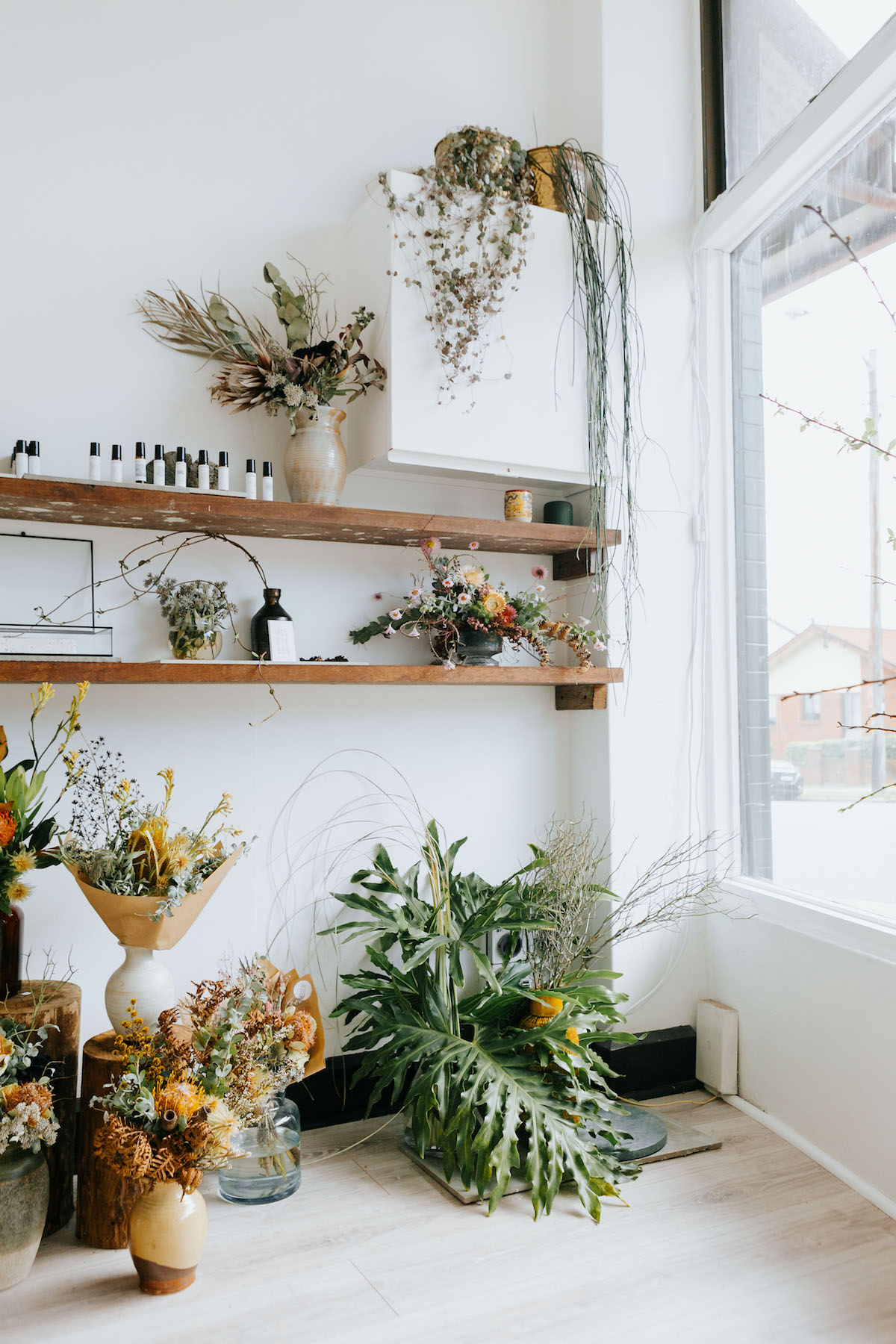 What did you want your floral style to be?

“Making flowers a part of people’s lives. Like less of buy on your birthday a big bouquet of random things that you think someone else would like. I’m now reading more into the language of flowers, like back in the old days people were really into singular meanings of a stem.

“A singular stem, a yellow rose or a carnation and they all kind of have a language going on. So, if you were to give someone a bunch and it had these certain flowers in it, it could say like “hey, I really like you” or “hey let’s get married” or “I’m so sorry, I appreciate you”. I wanted the business to be flowers with a bit more meaning. And now I am getting that bit more into flower language, it’s kind of coming together more about how I can make that happen.

“[also] a bit more about people’s lives, having it to be a bit more sustainable and the ethics behind it, which is quite hard because a lot of flowers are imported. It’s hard to find growers that don’t use heaps of chemicals and 90% of stuff is wrapped in plastic.

“Flowers that have meaning to your life and are sustainable, not just your traditional teddy bear and wine florist, something a bit different. I think this is where the dried flowers really come into it, because people are like wow, they are recycled flowers that are amazing. Don’t just throw them out, they have meaning, they have a longer life span. It’s a combination of a lot of things pulled together to be hopefully different from everyone else.” 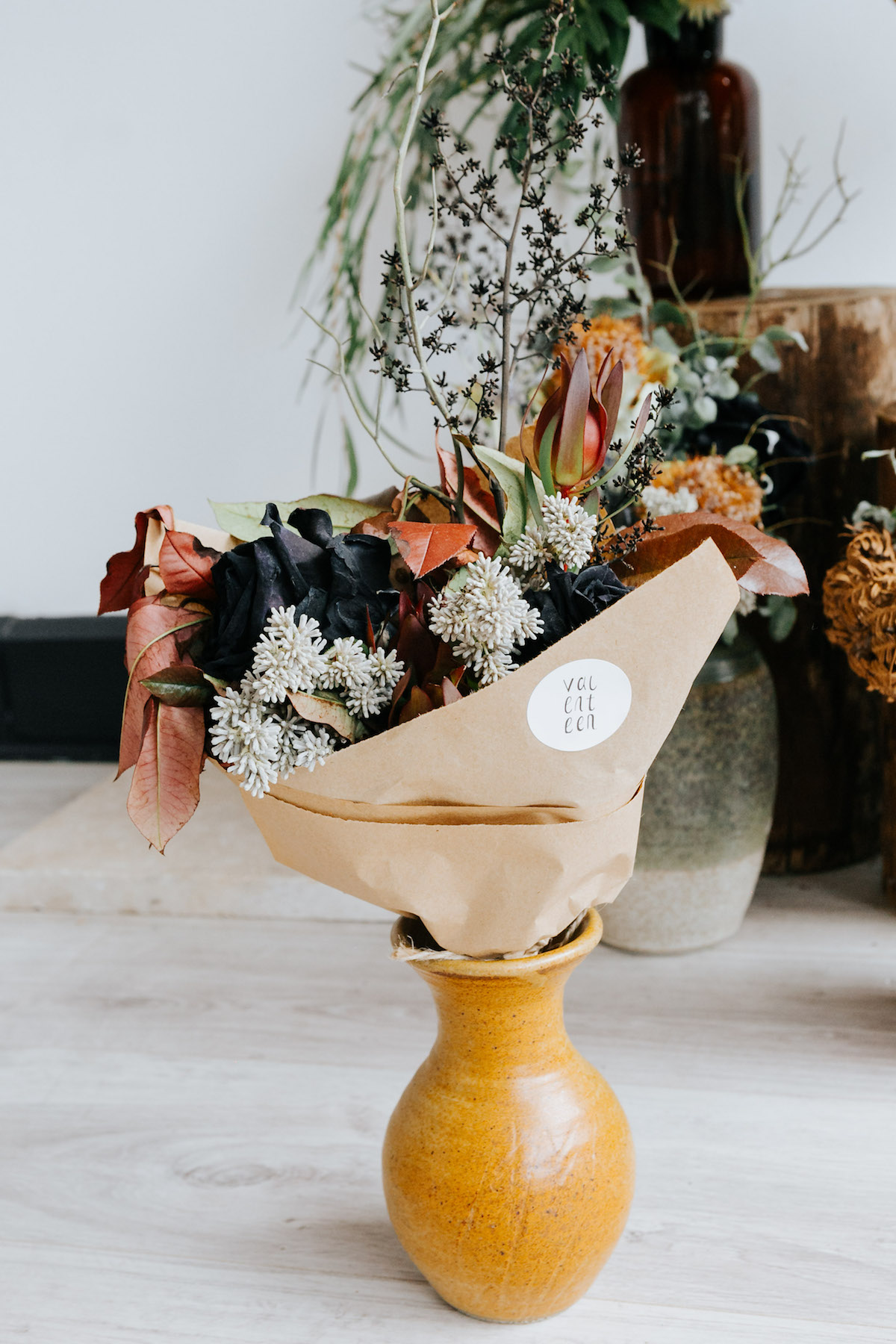 Are you doing this full time?

“I still have a side job, property staging for houses... I got into it because before I did my business degree I did a diploma in interior design. I’m a very indecisive person…constantly studying. I feel like after this I want to go into naturopathy and go into the meaning of flowers and all that.”

Where can people purchase?

“Pretty much maker store is my number one place. Sometimes people will privately message me to make an arrangement and stuff which I can do but yeah mainly maker’s store. I’m starting to get into commercial kind of arrangements. Like big foreign sculptural arrangements. I have been doing the window display up at Skin Matrix and smaller desk arrangements like at House of Lita. 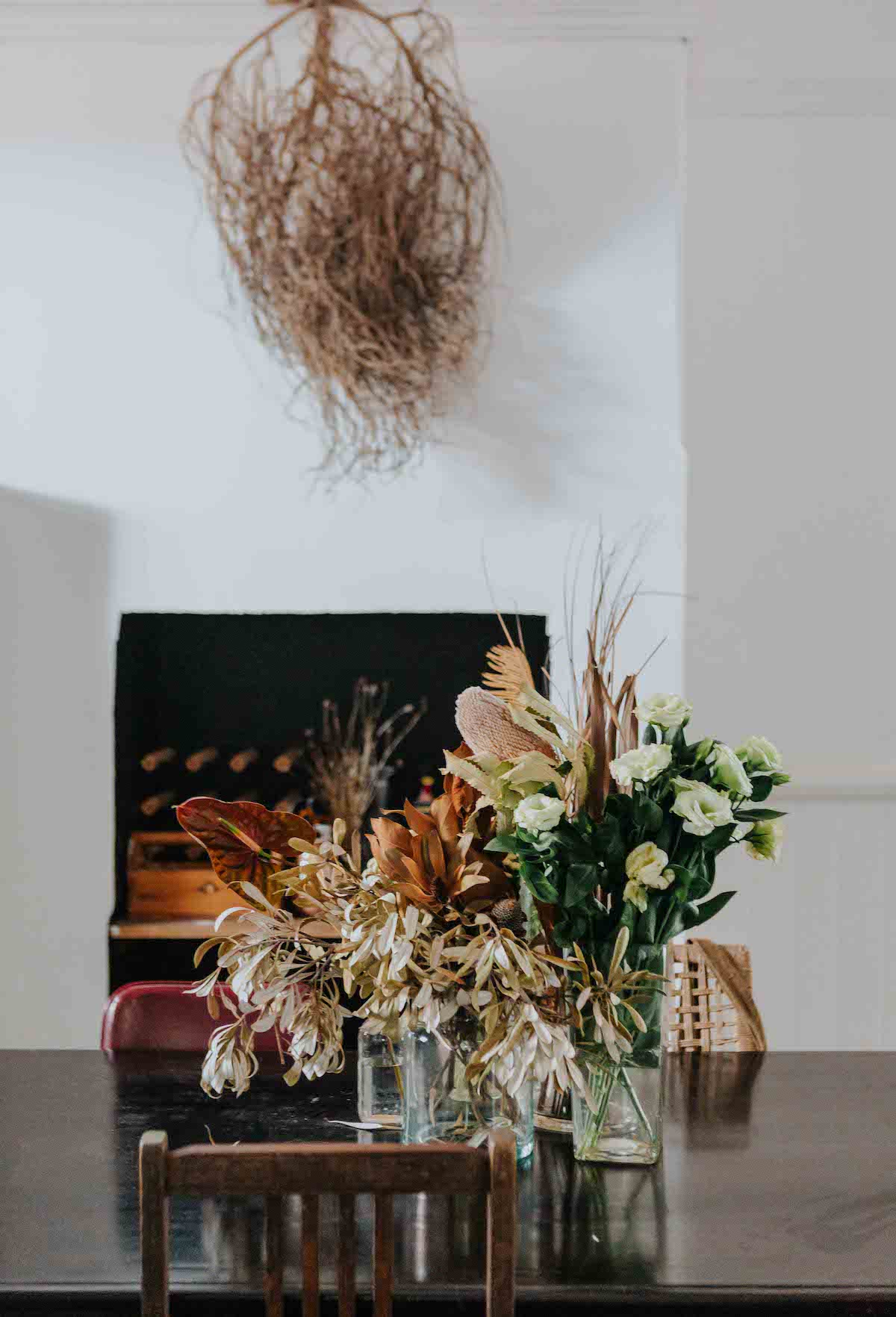 “My house is very full on. The front porch at the moment have lots of dried palms…it's kind of messy, its like a jungle! Lots of sticks, like if I see a stick I want to save it. My house mate is like what are you doing with all those sticks? And I say, don’t throw it out I'll use it one day!

“And then when you walk in I have a lot of dried arrangements, I have an amazing palm pot, it's almost like a chandelier, they are just so beautiful. Palm pots are my favourite things, they're so versatile. I have it hanging over the mantlepiece and I have a wreath in the bathroom, I made a big kind of chandelier hanging over the bath.

Do you make everything at home or store?

“Sometimes I'll make it all in store. Kind of in the main room, you kind of have to make a mess to make something beautiful.” 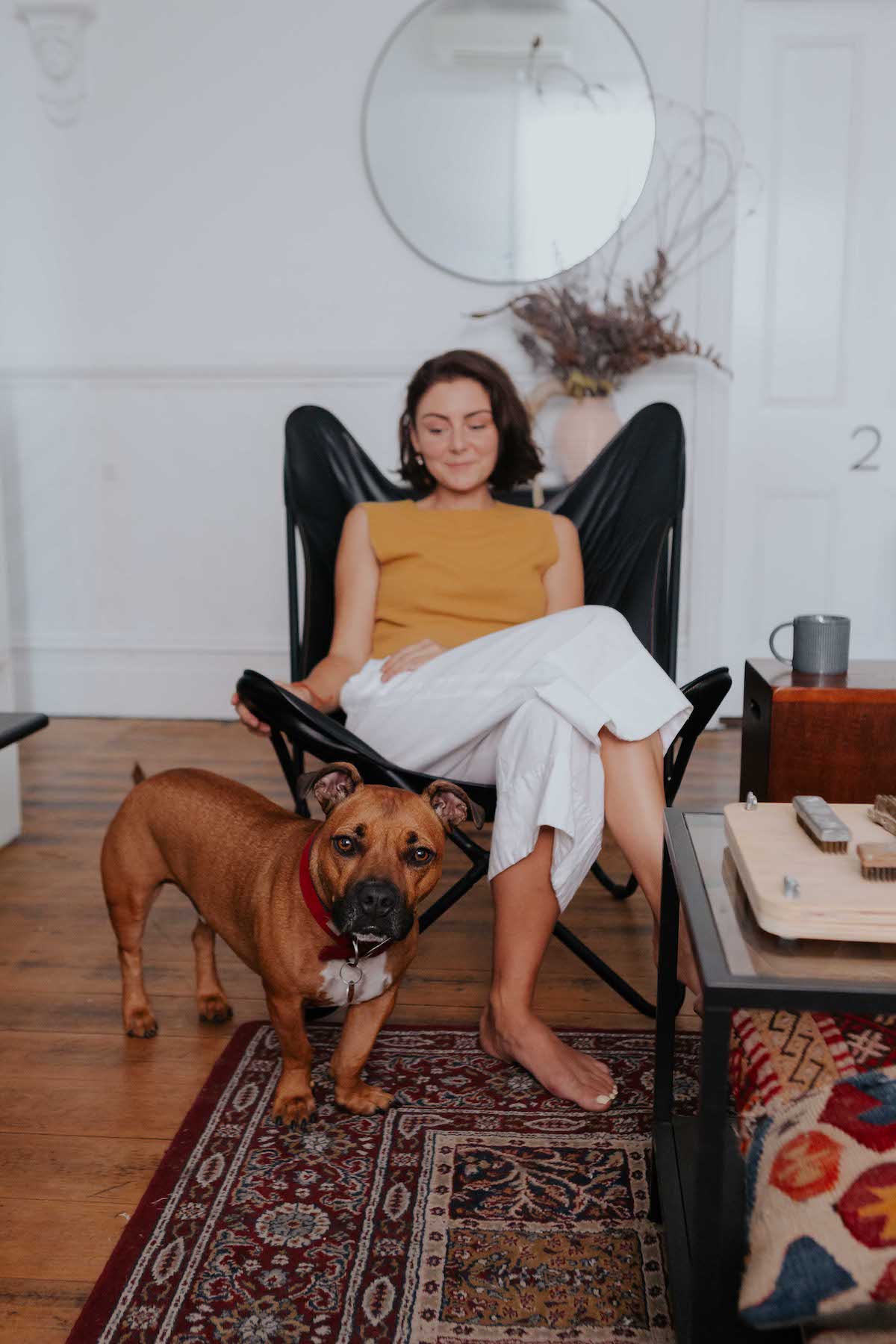