Having been shortlisted for two prestigious, national Houses Awards, Newcastle architects, Anthrosite have taken out the top honour for their work on a secondary home on a challenging infill site in Waratah.

It may be said that a design is only as good as its brief. When retired commercial builder and property developer, David Pidcock came to Newcastle architect, Mark Spence from Anthrosite Architects with his vision, it was the start of a mutually rewarding collaboration.

David had purchased the block with an existing residence on it in Waratah, partly due to its dual occupancy potential. The block has dual access, with Turton Road to the front and Bedford Street to the rear. With tenants in the existing house facing Turton Road, David saw the opportunity to build a secondary dwelling to provide additional rental income.

I met with the Mark to talk about how the design came about.

Mark, what was the brief for the project?

“David’s brief was that it was to be a secondary dwelling; a rental; energy efficient; constructed from SIPS panels; minimal labour requirements; and to maximise the size of accommodation on a small footprint within an urban infill site”.

“Cost efficiency in terms of pre-fabricated products and reduction in labour was an integral part of the brief”.

It is indeed a home designed and built with affordability, pragmatism and comfort in mind, while also delivering a resolved and thoughtful architectural outcome. Its design delivers an inspirational message to us all – beautiful and sustainable housing doesn’t need to cost the earth, literally or figuratively. It was designed to expedite the construction process and keep costs low.

“David was the driver for much of the design”, says Mark. 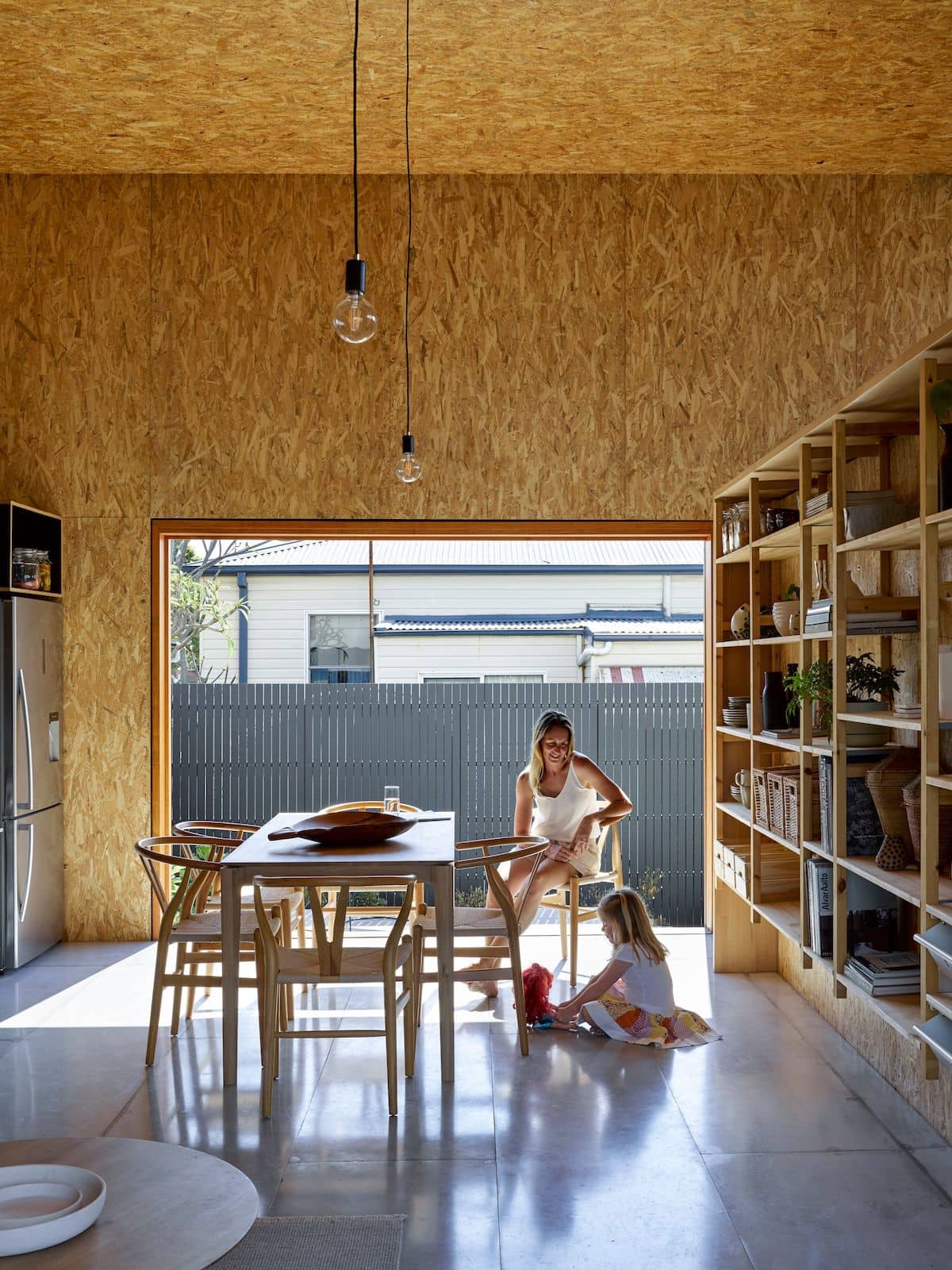 SIPs panels have only been available in Australia for the last decade. They are manufactured from strand board and consist of an insulating foam core sandwiched between two structural facings. They have proven to be popular with architects and builders due to their superior eco-friendliness, acoustic and thermal insulation, fire and termite resistance, as well as an efficient construction procedure and reduction in labour costs.

The panels act as internal and external walls. Although the system is designed to be cladded on both sides, the decision was made to leave the interior exposed throughout, taking the internal aesthetics to the next level. 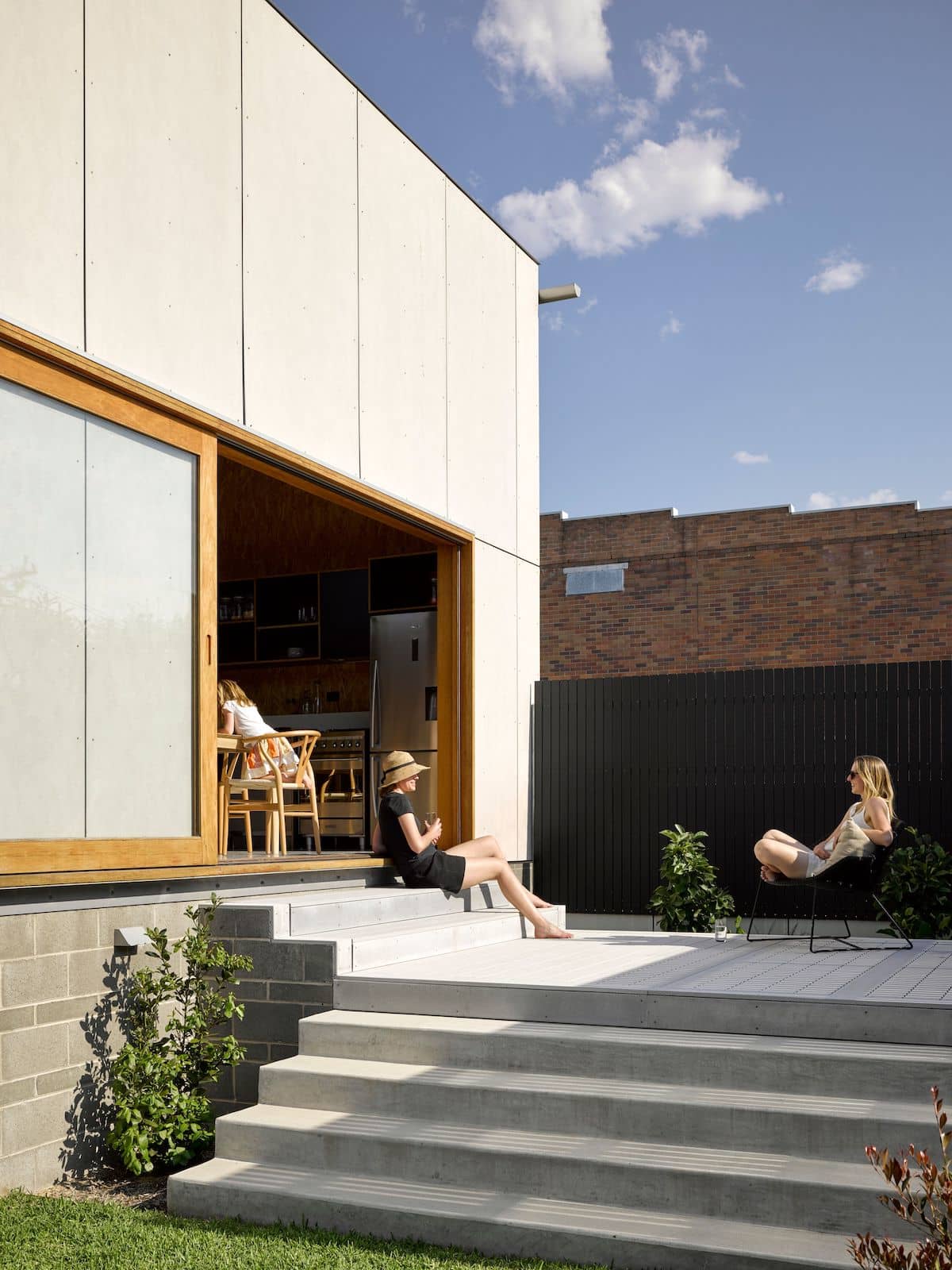 Mark, had you worked with SIPS panels before?

“No, we had never used this product. The specified SIPs system came directly from David. We were excited because it was something we’d never done and it’s great to try different methods of construction systems. It really formed the start of the project. The builder, Steve Devitis, had never built anything like this before either so it was a new experience for everyone”.

The end result is so stunning that it would sit proudly in any glossy home magazine. What is it you’re most proud of?

“We’re proud of so many things. The fact we were able to use different materials for the first time. We had never worked on flood prone land before was such a great challenge to overcome. Working within the secondary dwelling code framework was not something we had done before either. We get excited by new challenges. We didn’t just turn up to the site and automatically know what the solution was going to be. It was a process that involved working closely with David and working with the materials he wanted to use”.

The SIPs panels have a striking aesthetic. What was the inspiration for the external cladding?

“With the knowledge that the panels were always going to result in a very rich and lustful finish, we wanted to contrast that with quite a rough and raw finish on the outside . We used pre-finished fibre cement board to clad the exterior. It’s a more expensive product but it meant we were able to minimise trades in its construction, thereby delivering a low cost solution. The fact that it was pre-finished meant we didn’t require onsite painting and it reduced scaffold time”.

You’ve mentioned that cost was a major factor in this project. What was the total cost of the build?

“I believe it was around $350,000. The client provided the panelling and cladding. The majority of the budget went on the external envelope with the insulation and double glazed windows. The shelving in the living room is all from Ikea”.

The detail in the brickwork at the front of the house is whimsical and striking. Mark explains, 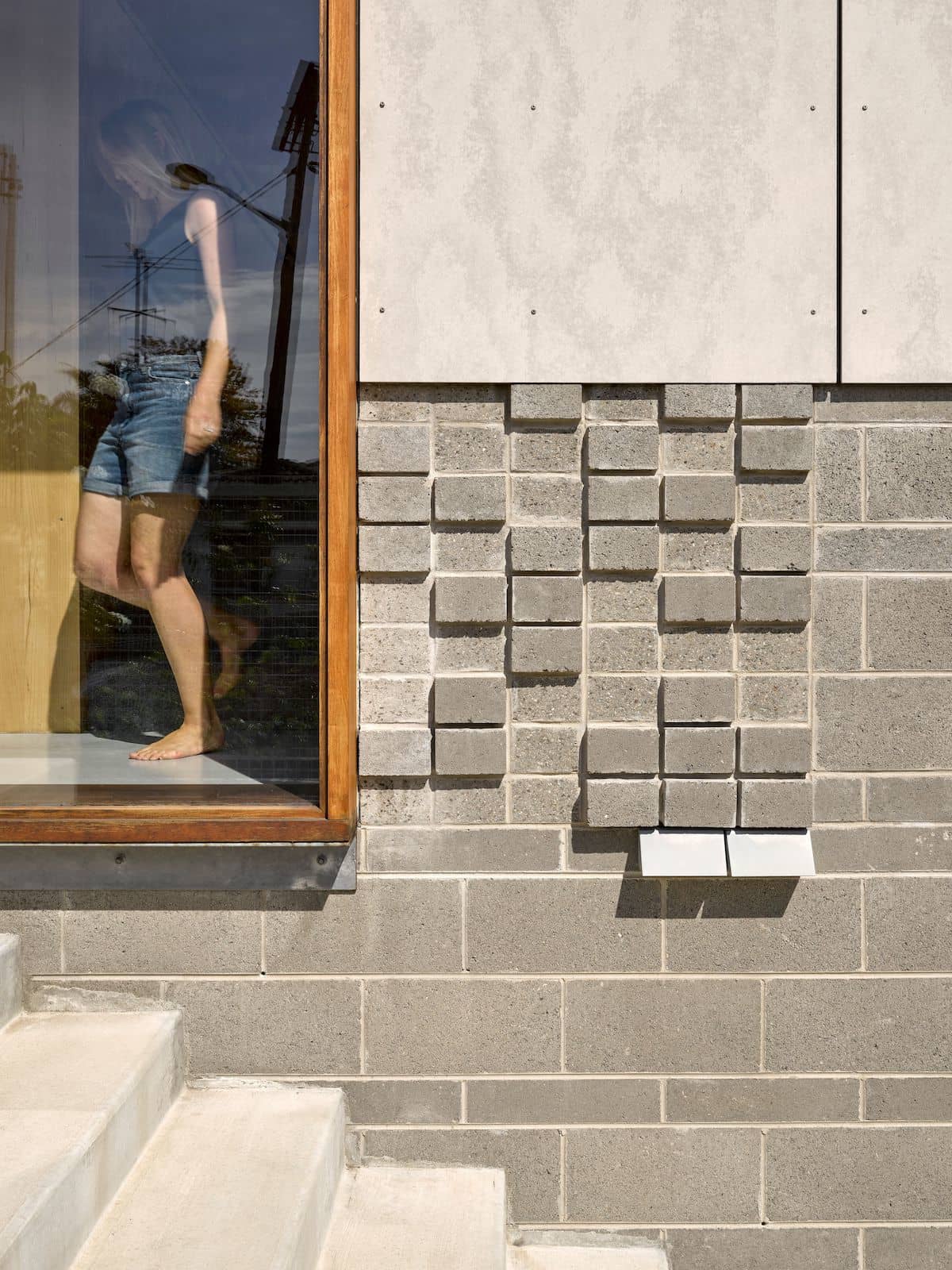 “We love to work closely with our trades. We worked with Matt Oates from Brickslayer for the build and it was important for us to acknowledge this is an elevation and to create a feature out of it.  The idea came from the concept of a foundation stone. We used corbeling as a technique to add visual interest and texture, as well as different sized bricks in a random pattern. We used the same concept in the bathroom, which we left raw as well. Offsetting patterns are visually more interesting and tend to be more forgiving”.

Another material David wanted Mark to use was INEX flooring. It’s a light weight tongue and groove flooring system that can be treated to give a polished concrete like appearance for a fraction of the cost. The end result is a slightly reflective surface that bounces the light to create a bright and airy space. 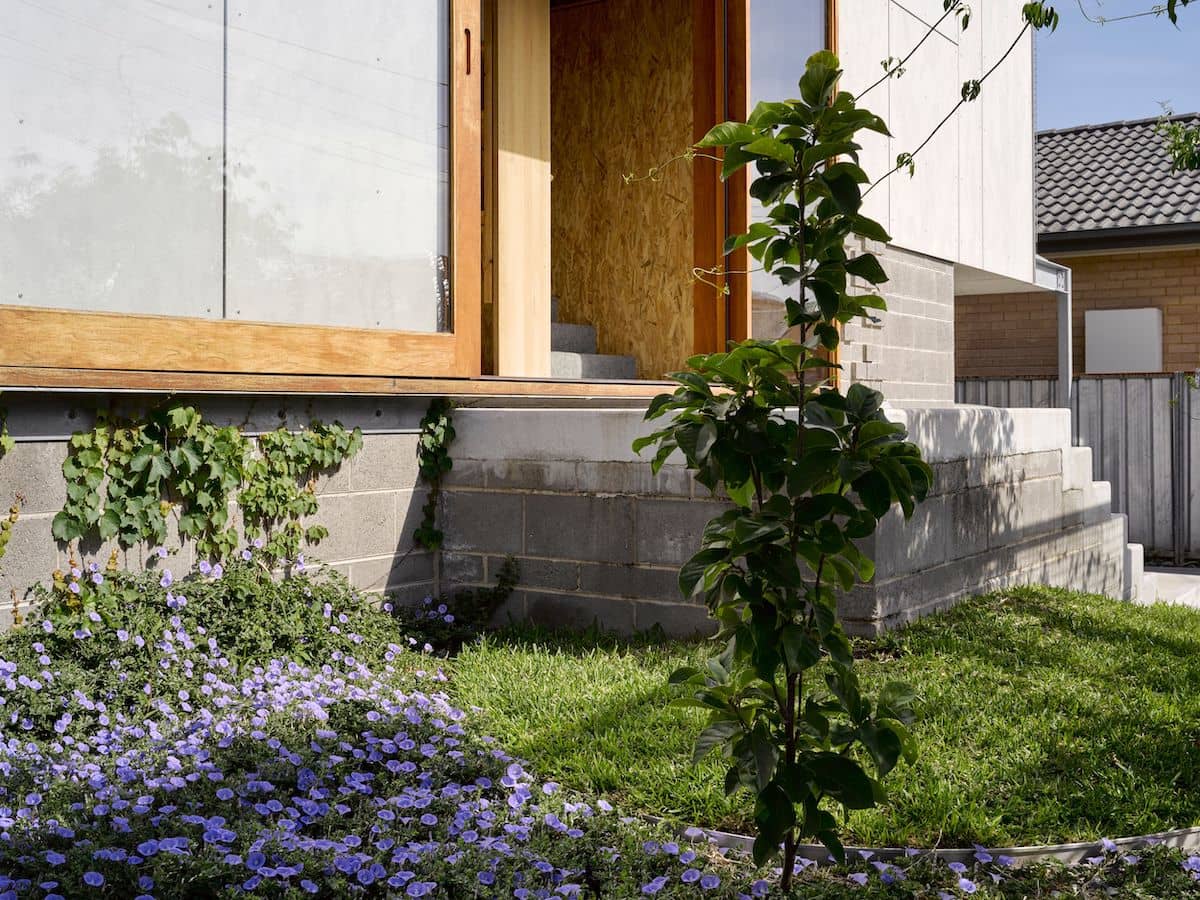 This split-level home features a generously sized bedroom on the mezzanine level, which is designed to be split into two if the need arises. High level, bifold windows extend the length of the room, allowing the house to breathe and inviting an abundance of natural light. A full height green screen was a late addition to the design, after David was inspired by Jamie Durie at a local nursery. The introduction of the green wall saw the installation of a steel screen to support a luscious wall of green. The steel was replicated in the front fence, resulting in a natural relationship between the front of the home and the green wall. 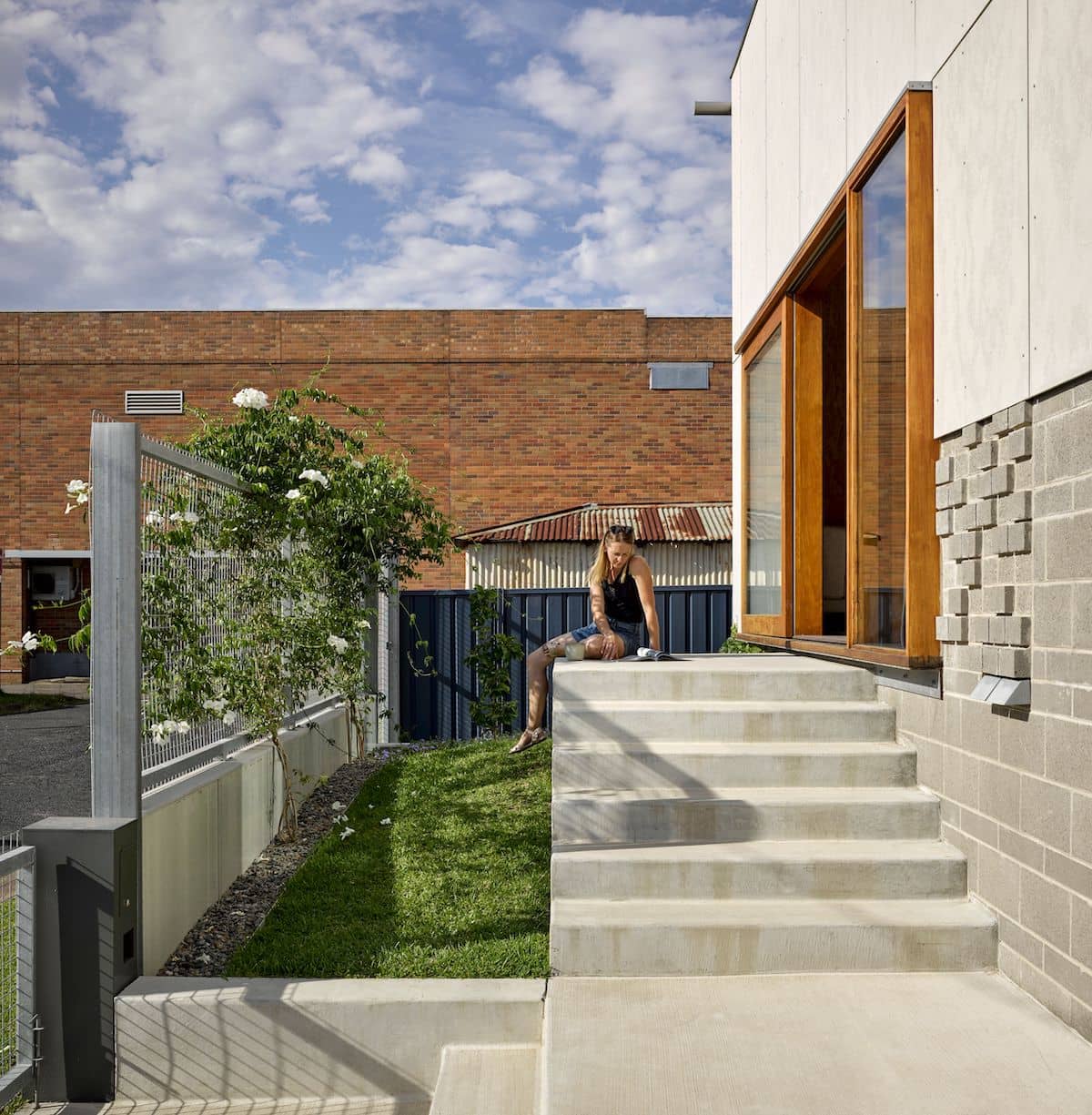 Described by the architect as having a “box-like form”, the home is softened with timber doors and the unexpected juxtaposition of a cottage garden. Designed to be self sufficient, the landscaping is the work of Chris Johnstone from Bosque Studio.

Mark and the team at Anthrosite Architects have been shortlisted for New Houses under 200m2 and awarded first prize in the Sustainability category for the prestigious national Houses Awards 2020. Presented by Houses magazine, the Houses Awards is an annual program celebrating Australia’s best residential projects. A Houses Award is one of Australia’s most sought-after accolades for residential work. 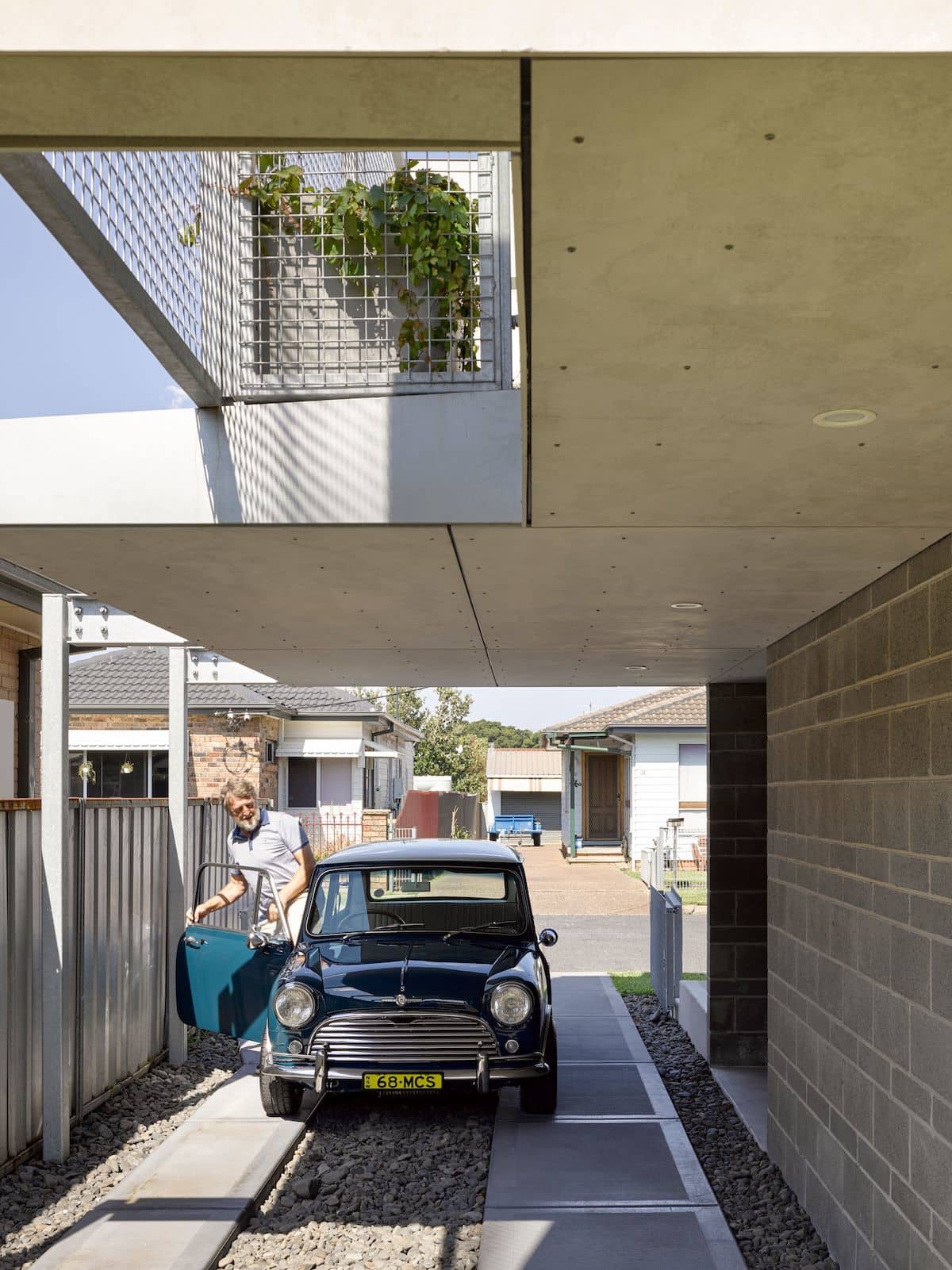 Jury citation: “The jury found the deliberation for this year’s Sustainability award to be a delightful challenge, given the breadth of mature and thoughtful shortlisted work that championed sustainability as inherent to good design. Waratah Secondary House by Anthrosite stood out to the jury, however, in part due to its modesty.

An integrated approach to sustainability isn’t simply about adding technology or satisfying a particular performance rating. And, frankly, size does matter. Waratah Secondary House is a small, humble project that delivers something that we need to see more of in our cities and the jury commends all involved”.