The artist behind the pillar people

You will also find her at the Flying Spanners Gallery and Café in Teralba.

With about 15 works throughout the Civic precinct and 10 in the Mall and counting, not to mention all the electrical boxes, you are sure to have walked past Bec's work at some stage. 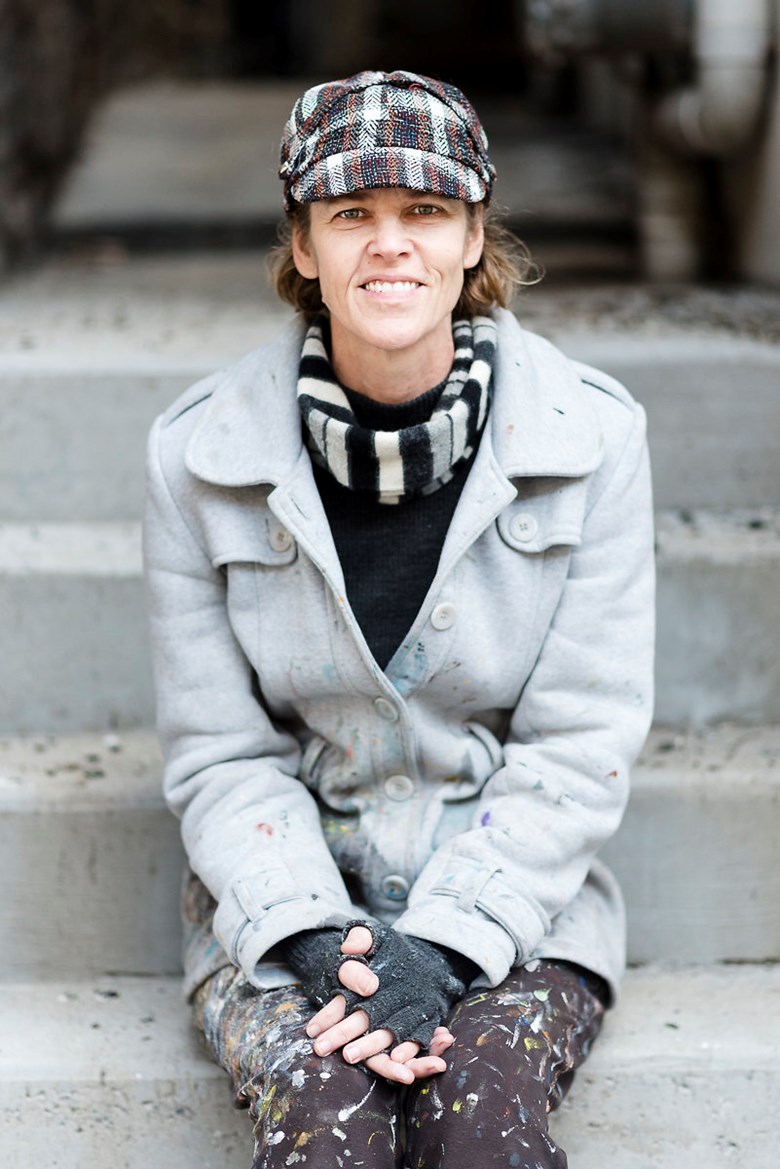 "About two years ago Newcastle Now got in touch with me. I started with the signal boxes, just painting them as an underwater theme because that was what they were after, and that led to all the pillars".

Making her way into the Newcastle CBD one or two days a month, you will find Bec painting these characters to life, and if you're there at the right time you might even find yourself becoming part of the artwork.

"There was a couple of young guys once that pulled up beside me and he said can you paint me into it? …he said his name was Jonno and his mate's name was Rope.

"This box had a whole heap of fishes on it and one of them was reading a book and so I called the book the adventures of Jonno and Rope.

"I didn't actually know what I was going to call the book, sometimes I make it up on the day or come back later and add things.

"They drove off and came back later in the day. I was then up the street working on another one and I saw them get out of the car and he got so excited he took photos and saw me and gave me a thumbs up and said 'thank you so much'".

How long does I take you to paint one of the pillars?

"I probably spend an hour or two of a night designing, and I'm a bit fussy about what I do where, so I try and get connections happening. Like a postman outside a post office if I can manage it, that sort of thing. I usually start about 6 or 7am in the morning, then preparation can take up to 2 or 3 hours, so I'm not usually starting them until almost lunch time. Then I would work through to the afternoon, so it's a full day, a full 8 or 9 hours." 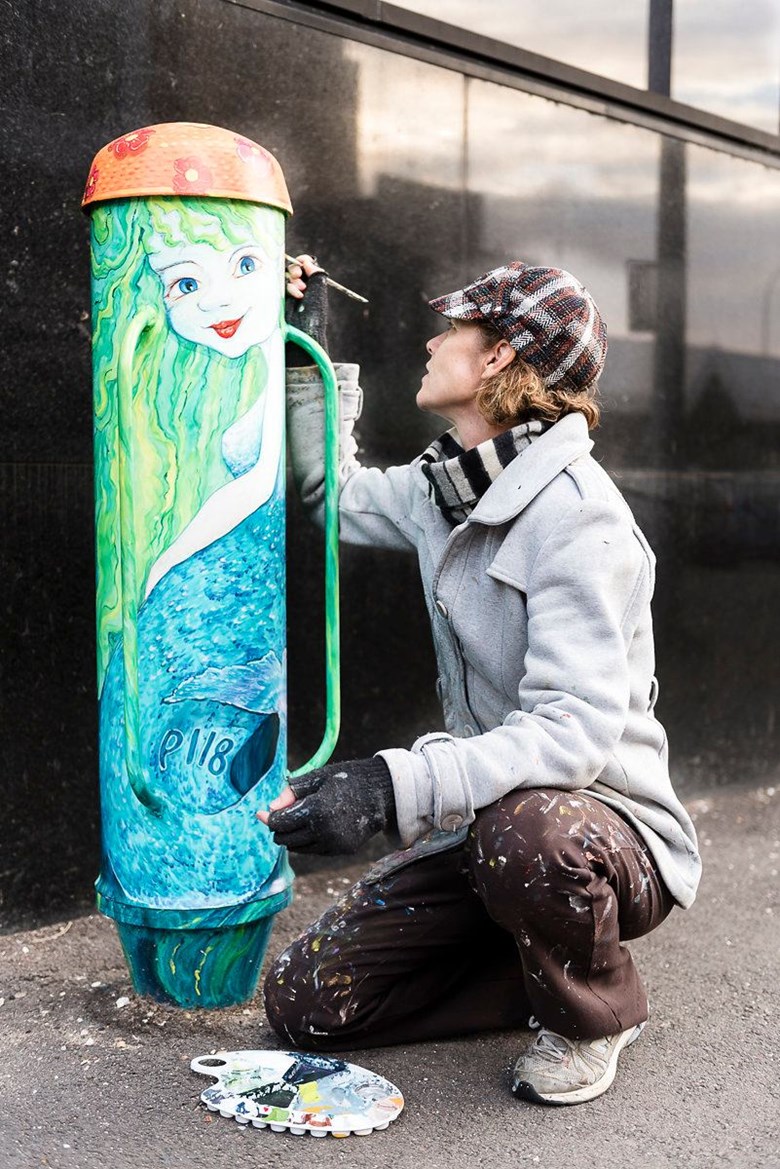 Have you always worked as an artist?
"Yes, I was pretty much from kindergarten drawing things for the kids in my class. I went through school with art being my best and favourite subject. I then went to TAFE and worked part-time with a picture framer and art restorer. I did that for a little while with Charles Hewitt Frames who was a major framer in Sydney and at the same time I was running a Mural business.

"I met up with a fellow artist at the end of our studies who was offered a job to paint at a local dentist surgery. So that led to a whole lot of murals and we partnered up and started a business. That was about 30 years ago in Sydney. I left that partnership about a year or two ago now. I just found it was too hard to travel down to Sydney with everything else that was going on.

"I still paint murals, I just do it under the Flying Spanners Gallery."

Originally from Sydney, Bec moved to Newcastle about 8 years and opened The Flying Spanners Gallery and Café in Teralba. A quirky and warm café, you are literally stepping through her front door which sits in front of the art gallery.

Is there a big art scene here in Newcastle?

"Yeah there is actually, I guess because Newcastle is smaller than Sydney, I think things get lost in Sydney. Whereas I find it very visible here, maybe because it's still very grungy? Street art is still very prominent here. That was one of the things that drew me to this area actually, seeing the potential. Going into the city there was just this creative energy." 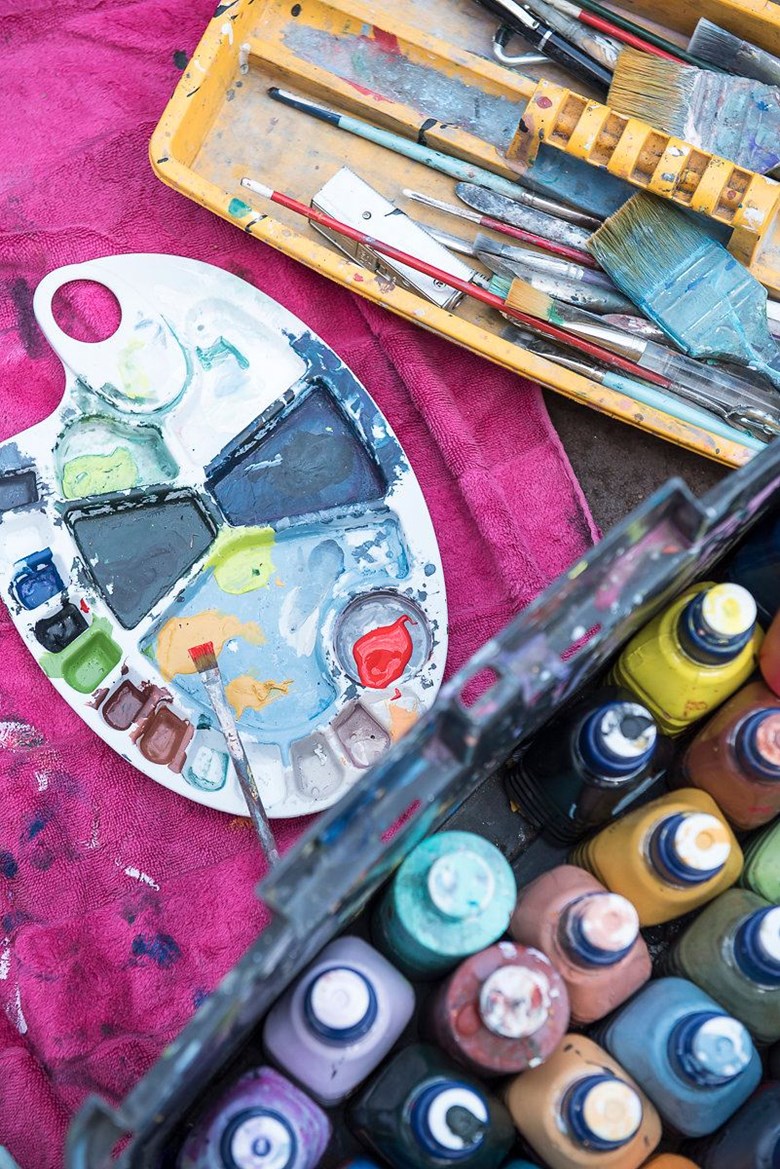 Do you get people taking pictures of you when you are working in town?

"Yeah, all the time. I probably get about a dozen comments a day. There is much misery in the world, so it's nice to have something that isn't so serious, colourful, bright and happy.

"Every now and then I get people come up to me and say, 'it's you painting these!'

"It's funny, I feel a bit like a legal Banksy. Which is really kind of nice, I mean I don't compare my work to his, it's amazing what he does, but it's much more social and political comments I suppose. I don't tend to go down that path. I just want to make people smile.

"I do feel like I'm doing graffiti, but I've been given permission to do it. 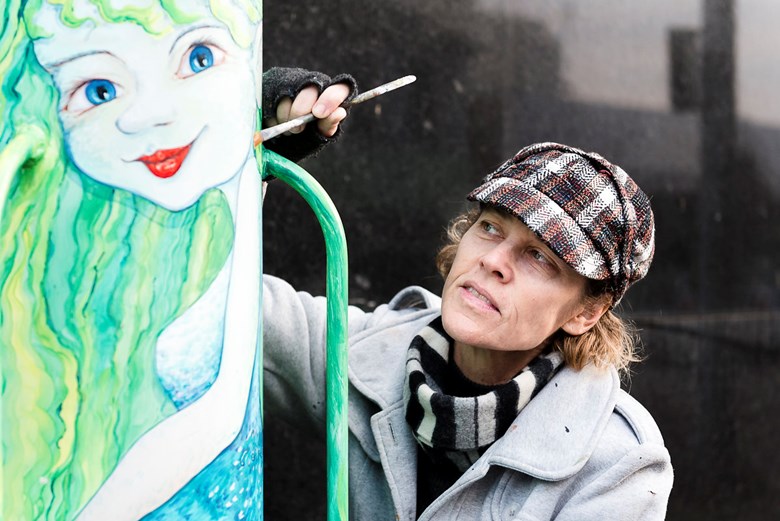 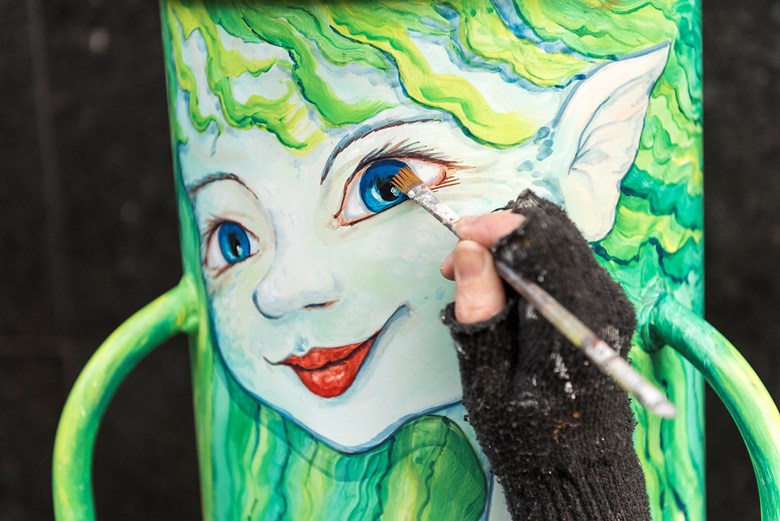 "It's nice you get people coming up with their kids saying they are enjoying them and that the kids look for them. I've got a map actually, you can go around with, and it has names of all the characters.

"The main thing for me personally, that I am able to do that for people, the joy I am giving them is coming back to me. I always feel like I'm leaving doing something really worthwhile." 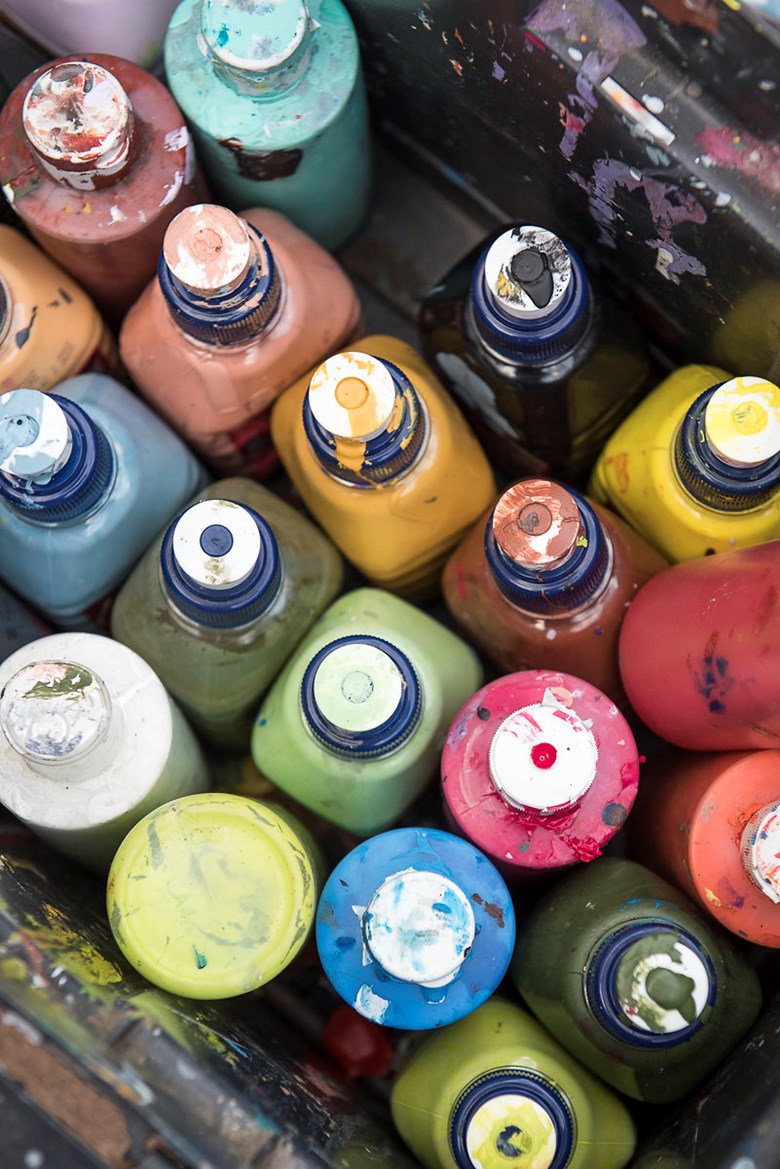 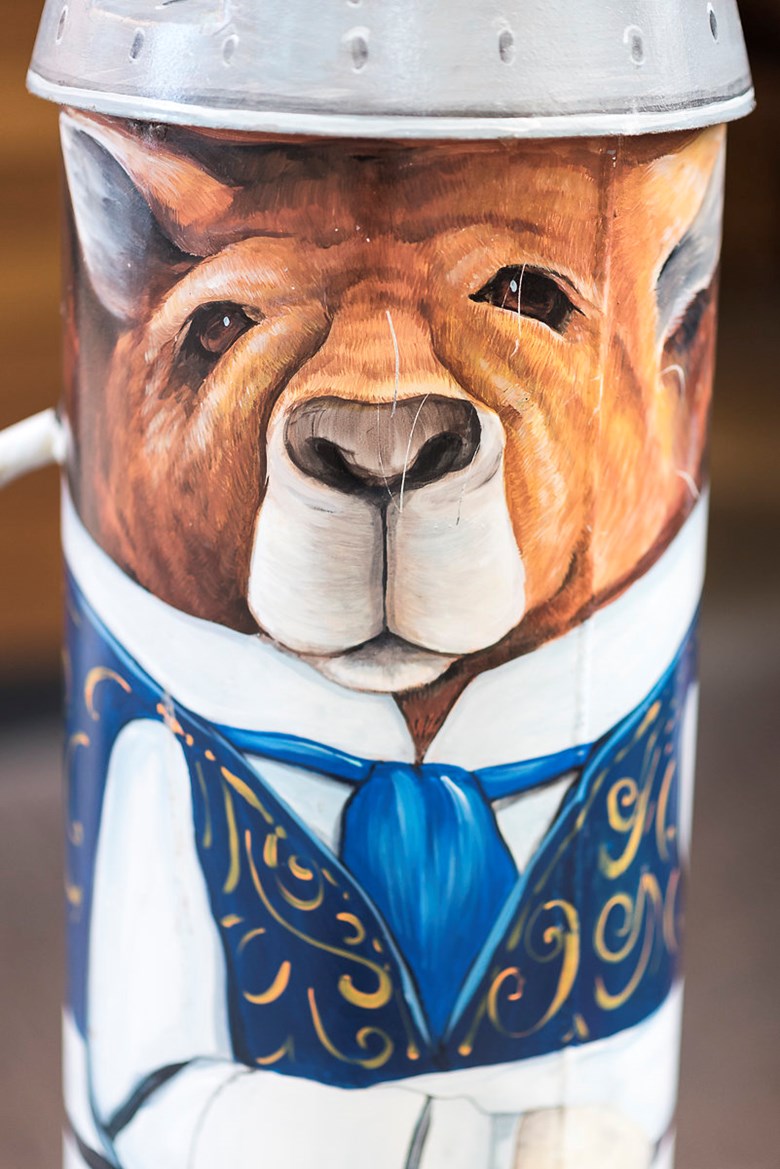