I’m constantly evolving what I create and how I make it. I love producing the range of goods for the shop and I change it up quite often as new ideas come to me

Just last week we caught up with Newcastle local leathermaker, Geordie Malone, one half of Hide + Seeker; the Islington based leather and vintage store.

Originating from Bondi, Geordie came to Newcastle around 12 years ago to pursue a University Degree in Development Studies. With the academic world not really fitting in with his lifestyle, he dropped out a year later and studied to become a carpenter.

Always a creator and a maker, Geordie fell into leatherwork and has spent the last 7 years handcrafting his own range of bags, belts, wallets, and accessories. His work is beautifully detailed, handcrafted and is made to stand the test of time. How did you actually fall into leatherwork?

“I had a shed at the old Morrow Park Bowling Club. I was doing all of my woodwork out of there and playing mainly in the one band. I was doing heaps of woodwork in the shed and I had a woodturner who shared the shed with me, and he knew a little bit about leatherwork. I was getting really bored on tour with my band, just spending a lot of time in the car or waiting in studios and stuff. I wanted a project that I could work on the road, and leatherwork is just so much more compact. I can’t really do carpentry in the car…so, I started working on wallets and belts whilst I was in the car or in the studios.”

Where do you get your inspiration from?

“I’ve got no leatherwork training, which I believe is really good. It means I don’t get stuck in traps. I think that knowing how to do things properly doesn’t always necessarily help. I know that John Lennon claimed to write all of his songs on a piano because he found that on the guitar he would fall into traps. So, with piano, not knowing what to do, helped him. I try to get most of my inspiration not from other leatherwork. More like furniture making. So, the woven tote is my version of mid-century lattice furniture, but in a bag. I’m pretty into maths and that has actually helped heaps. The woven tote especially is super mathematic, just all of the dimensions. It’s the first time since high-school doing leatherwork that I’ve had to use all of those equations again.”

Where do you actually source your leather from?

“I’ve got a main tannery, which is Australia’s last wattle bark tannery, in Ballarat, Victoria. They’re the 5th generation, naturally tanned, super small-scale family-owned tannery which has been really great to deal with. But because of their small production, they often run out, and vegetable tanned leather takes generally somewhere between 3-12 months. If they run out, it can be a 3-month period before they have any more of certain stuff.

“I’ve got a few back-up sources that I use. There’re some importers that import American saddle leather, and I use a lot of Kangaroo leather and there are three main tanneries in Australia. There’s one in Queensland, the same place [as above] in Victoria and there’s also one in Sydney. I try to use a bit of all of theirs, as they all do a good job of different colours.

“I think I’ve sampled almost every piece of leather there is in Australia.”

What is your favourite piece?

“The woven tote is pretty up there. It’s been a love/hate relationship as it’s been my hardest bag to make. I used to break a lot of sewing needles. Generally, around 1-2 needles per bag.” 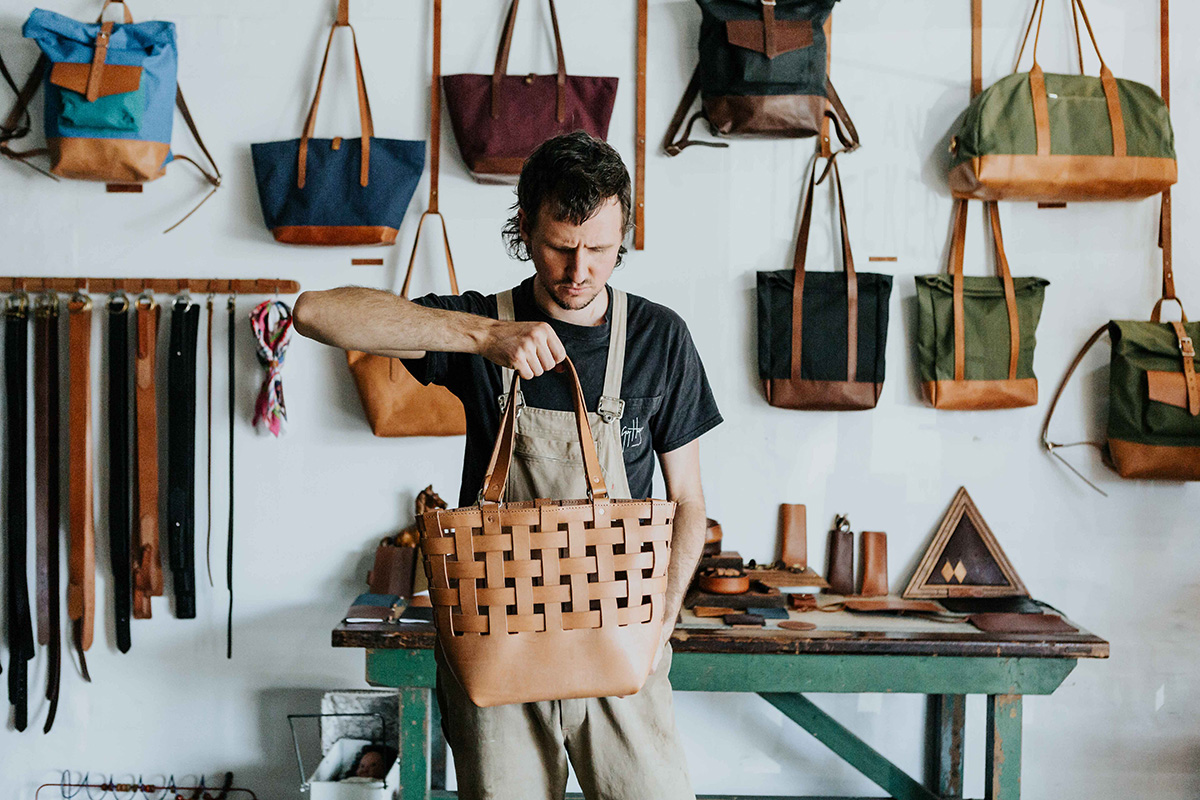 Do you do custom orders?

“I don’t do them anymore…the time is really hard, and I take design super seriously. I don’t want to put a piece out into the world that isn’t 100% functional and won’t last forever… I properly design everything, think about it, I make paper templates and test it out. The making of the actual object doesn’t take that much time, it’s the discussing and back and forth.

“I maxed out my time last year, and I had no more spare time because most of it was organising not actually getting the work done. The benefit of not doing custom work is that we have much more stock and choices in the shop now, so it’s less necessary to offer custom. There are 10 to 15 bags available in the shop right now, but previously there would only be 2 or 3.” 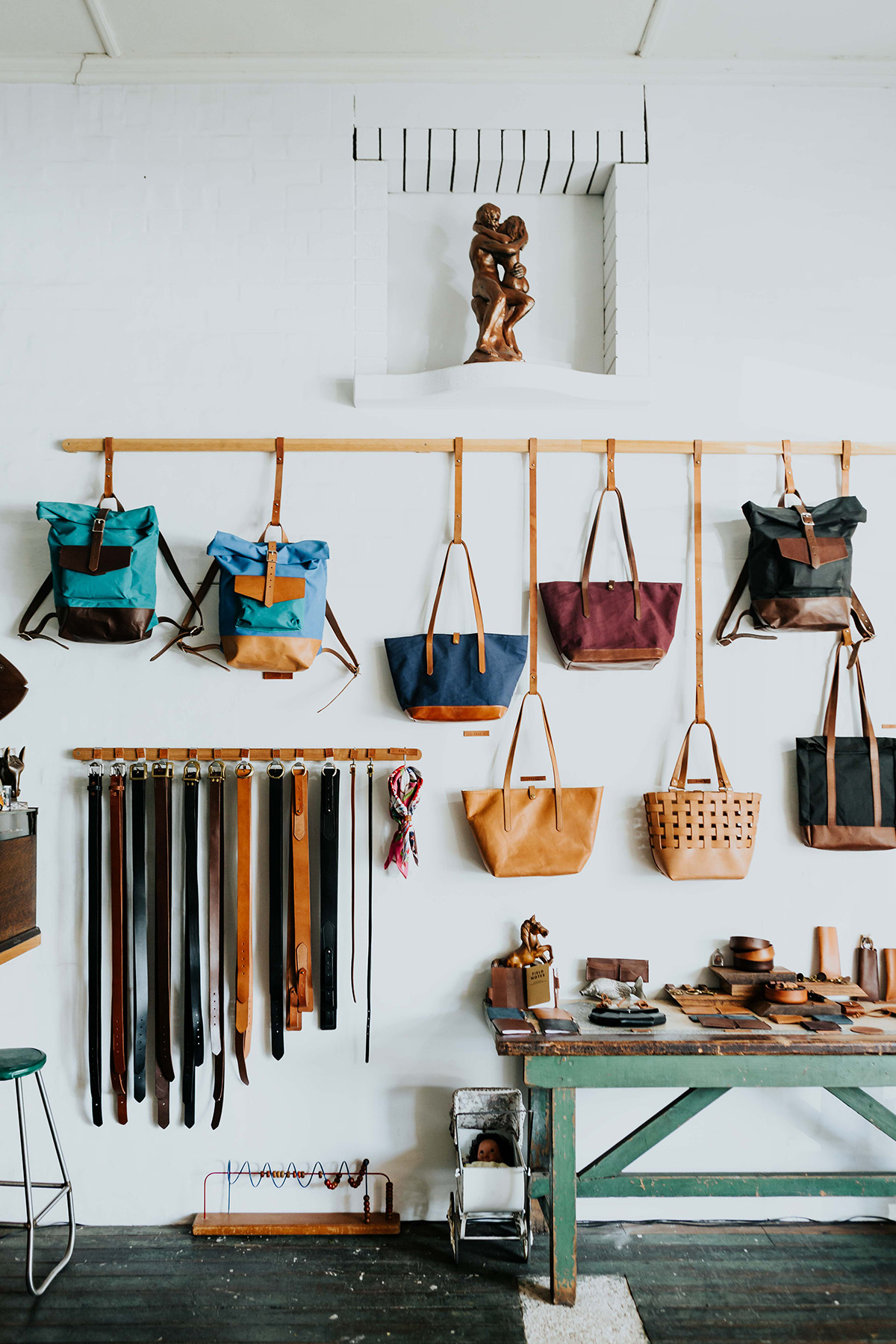 Can we find your work anywhere other than here, in store?

“I do runs of stuff sometimes for places… I’ve had heaps more wholesale interest in the leatherwork recently. So, I’m currently trying to figure out how I can do that. Mainly, how I can actually make the stuff.” 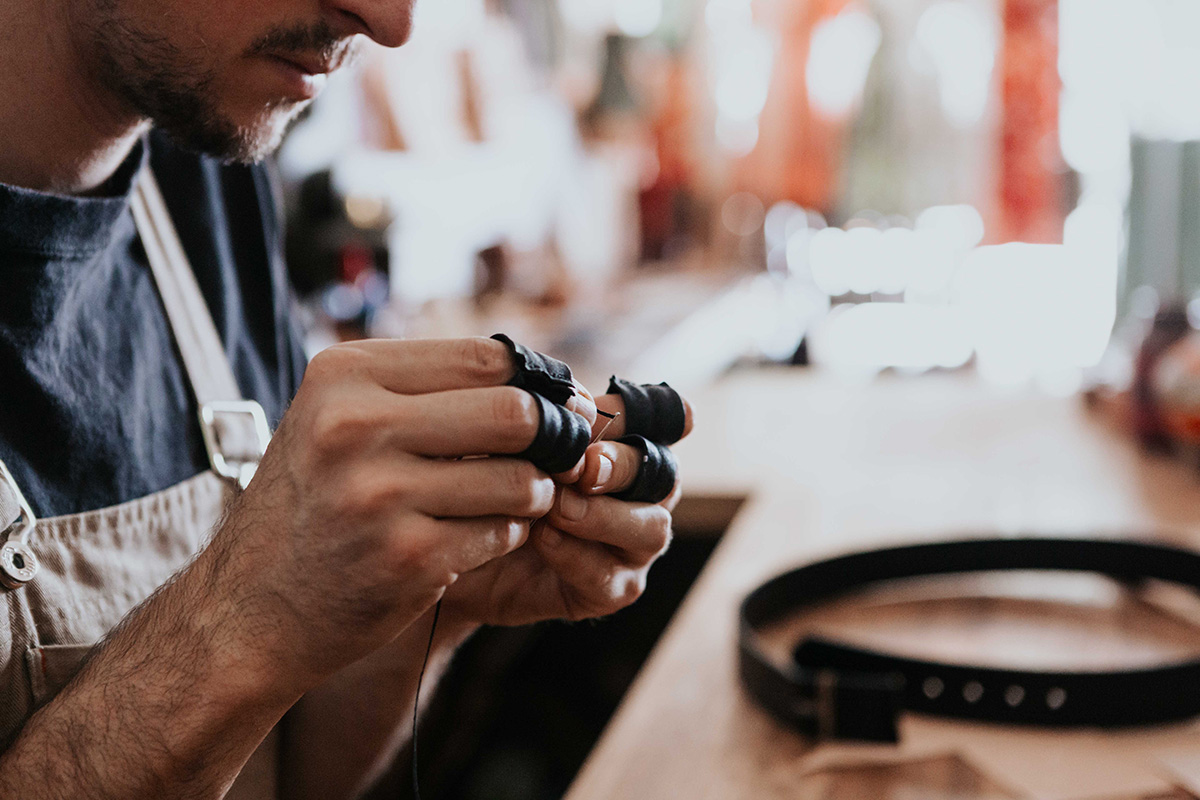 How long does the process generally take?

“I’ve got so many designs in the backlogs. There’re so many designs that I would like to release at some point, and I know my limits with how many numbers we can have in the shop. Unless I remove an item from the shop, then I can’t basically bring a new thing out. Some sit on the book for years, and then even once I’ve started them, that period can take ages.

“I still work on the Woven [tote] every batch. I came up with a new idea of how I can bring the pieces together that might work a little bit better and make the process a bit easier. Often, everything is a bit of a work in progress.” Why do you love leatherwork so much?

“I don’t know! I think I’m obsessed with balance, design, aesthetic and making stuff. I’ve always made stuff, even if I was to stop doing leatherwork, I would continue to make stuff. I even just like the process of making, I would never want to outsource the making, because that’s the best part of the job in my opinion. Even when it’s just making the same belt over again, I enjoy that a lot.

“I used to do a lot of art when I was young. I was good at it but wasn’t overly passionate and I think that was my brain just enjoying the balance and structure of images… by making small batches, I don’t get bored basically. At any point, if I don’t like making the bag anymore, I just stop making that bag.” 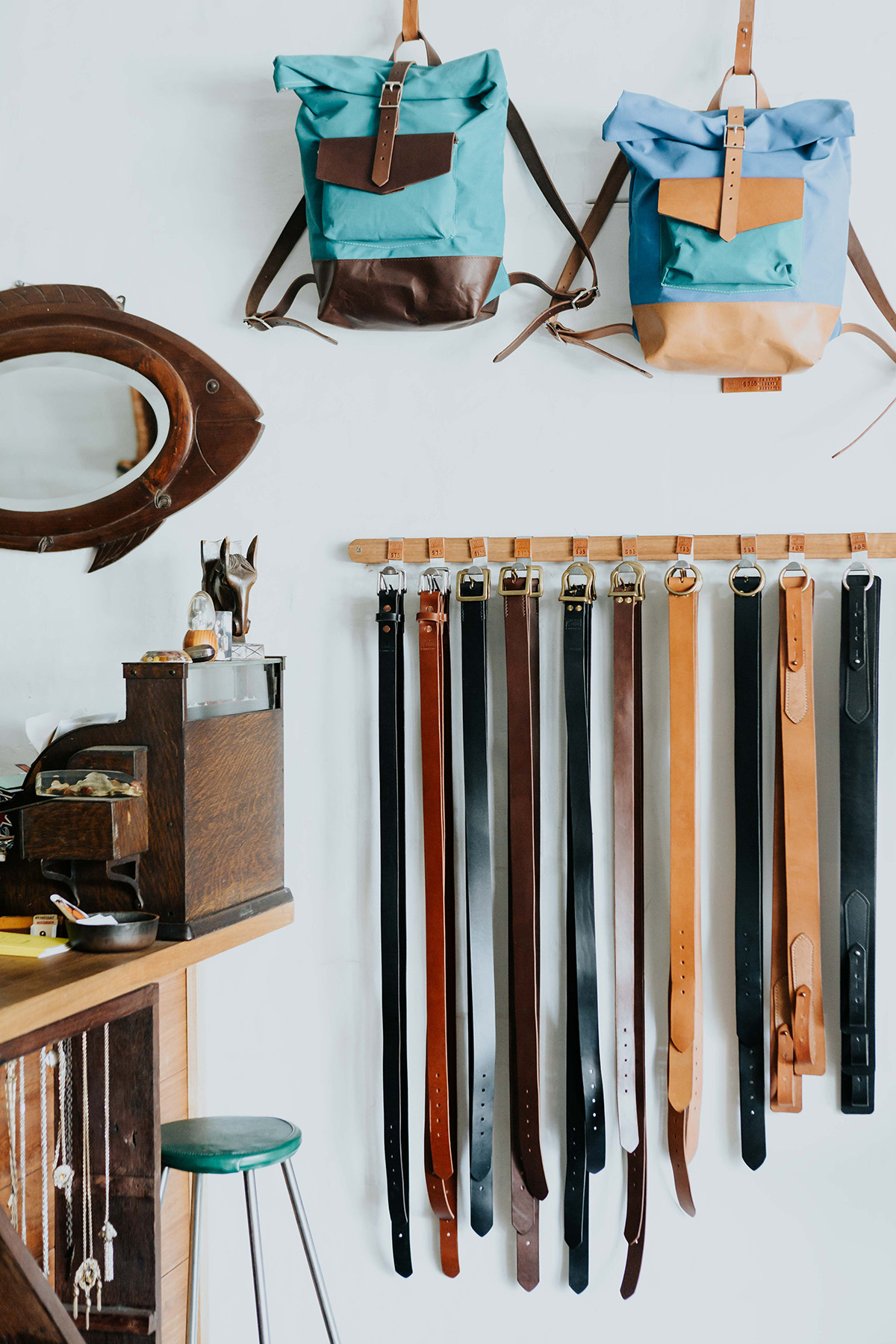 Have you ever thought of doing something besides leather?

“Our kids go to Islington Public School and I’ve always been tempted to do little classes. Because our kids all make stuff here, and they know how to use a lot of the tools. I’ve said they’ve got to learn how to make their school bags by the time they go to High School.”