We find things, we design things and we make things!

For most of you, the business Found Design Made may not be ringing any bells. But if you have had the chance to get yourself to the new Harris Farm on Darby Street, then you would have seen the jaw-dropping and marvellous Breadfall towering over the bakery section. Sydney raised couple, Calista & George are the master minds behind the creation – AND they built the entire thing themselves with their bare hands...impressive right!? Calista was originally contracting to Harris Farm as an interior designer, when they came to her with an obstacle they were faced with regarding this crazy idea of a Breadfall.

They wanted to create a bread-like tower, yet they couldn’t decide on an architect that would bring their artistic idea to life. It was here that Calista turned around and said, ‘I think my husband and I could give it a crack'! Essentially, it was that bread fall that initiated their business. The first Breadfall was installed in the Bondi Westfield Harris Farm Markets where the creation is only a third of the size of the one here in Newcastle. The process for the first Breadfall was super quick- just 6 weeks! With such a tight timeframe, the couple were fitting and screwing piece-by-piece right up until the very last minute of opening day. Following the Bondi Westfield installation they were engaged in November 2017 to commence the design process for the Breadfall on Darby St. Despite it being a similar concept, this project was going to be three times the size with differing mechanics and operational needs.

The bread featured on the Bondi Westfield Breadfall is very uniform and consistent. This meant that every nest that held a loaf was the same size and shape. But this time, the team were collaborating with local favourite, Baked Uprising. If you have indulged in their baked goods before you would understand that they are very rustic and organic in the way they bake their bread. They do not force the dough to be a replica of the last each time. This meant they had to make movable components on the nests that could adjust to hold varying shapes. Harris Farm's vision to have the bakery located on the mezzanine level combined with Uprising’s wide selection of bread, were the main factors in determining the Breadfall’s configuration and size.

“We had the idea in our head of what it was going to roughly look like, but as it came together, it was like wow…this looks good.”

With 4100 screws, 7900 washers, 1800 nuts, 200 bolts, 148 metres of chain, 8 bicycle bells and over 1 tonne of steel the Darby Street Breadfall took about 6 months to construct. This meant 18-hour days, every day – including weekends. Insane stuff right! No real outside help, just Calista, George and their little helper, 7-year-old daughter Kaila. Now Kaila is 100% apart of the team. She loves what mummy and daddy do and she always wants to be a part of it. From matching shirts to leather aprons, this family of three all work together to bring what is; Found Design Made.

“We just love making things, there is never a time when we don’t have a project on the go.” 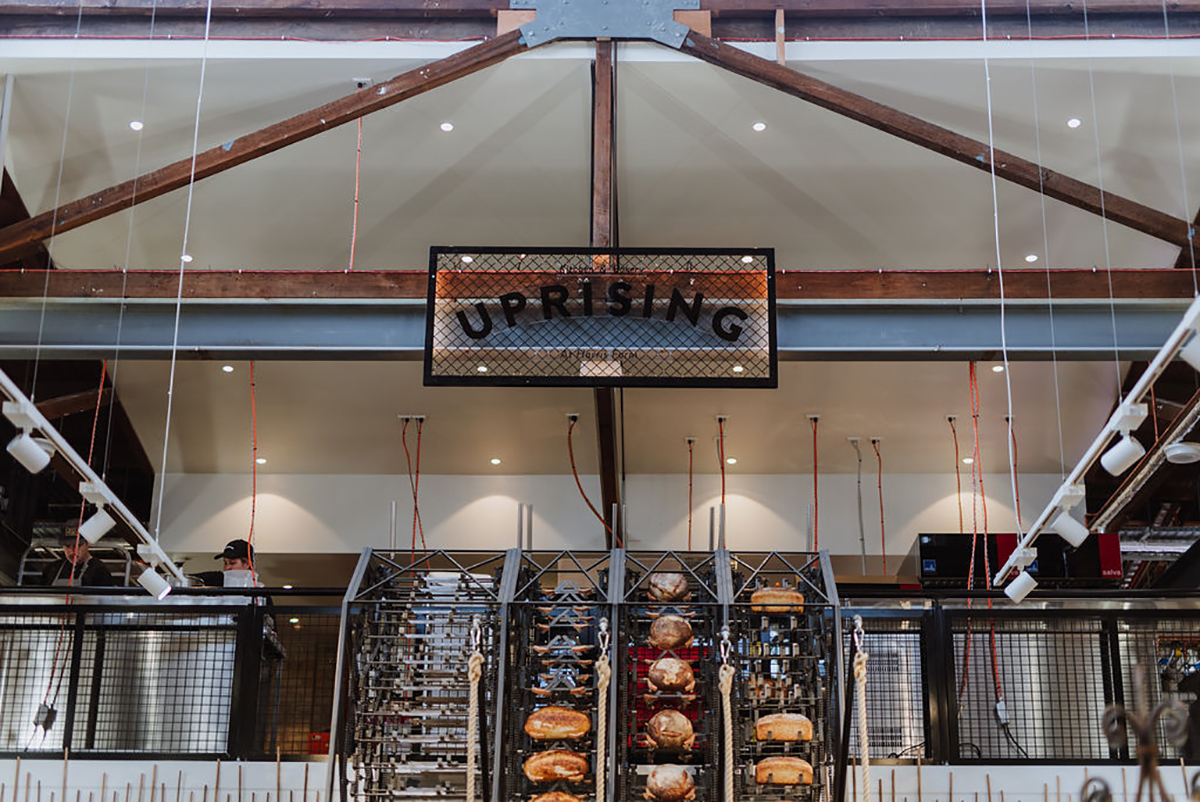 With lots of exciting new things in the works with Harris Farm Market; secret business at this stage though! The team are fully booked for the year and we can see why! We’ll be keeping a close eye on these guys and we're dying to see what this inventive family get up too next.