One of Newcastle's most historic buildings has been lovingly restored

A phone call & job offer at 3am in the morning, back in the early 70’s, is how the story of the rescue of Coutts Sailors' Home began.

It was to Alastair Kinloch inviting him to move to Australia from the UK. Twelve months later and with the offer of a full-time position in Canberra, Diane and Alastair decided to officially call Australia home and even start supporting Australia in the cricket.

Fast forward to 2013 and Diane and Alastair, thanks to their daughter who lives in Newcastle, found themselves signing the contracts to the Coutts Sailors' Home and the almighty task of renovating one extravagant and very run-down, old beauty.

Diane, ‘We signed the contracts at the end of 2013, with settlement happening at the end of January 2014 and then we literally started work the next day'.

‘The building has a long history and it’s been through many different phases throughout its life so we’ve had to make a lot of decisions along the way as to how we would restore it to reflect that. At one point it was a hospital, the Sister Kenny Polio Hospital, and government offices at another time, however originally Coutts Sailors' Home was built for the sailors arriving in the harbour, thanks in the main to the energy and funds of Rev James Coutts.'

What state was the building in when you first took it on?

'Most of the rooms had no floorboards with no ceiling, no cornice, just walls, but that meant we were able to see that the building structure was very sound, and it presented the opportunity to have a 'new' house within a fantastic heritage structure... with lots of research and decisions to look forward to.

'Many of the windows were brand new, but had raggedy brickwork around each of them, all the architraves and window sills had to be handmade, and every window is a different size, just slightly, as they didn’t measure things back then. Everything is bespoke! The windows to the front were reinstated as sash windows, handcrafted in cedar.

'For us it was important that we take it back to its original state, we have modernised what is inside but we wanted to have it as original as possible. We didn’t want the woodwork painted and let’s face it, it was built as a sailors doss house so that’s why we haven't included chandeliers, just lighting that we think might have been similar to what was there originally. 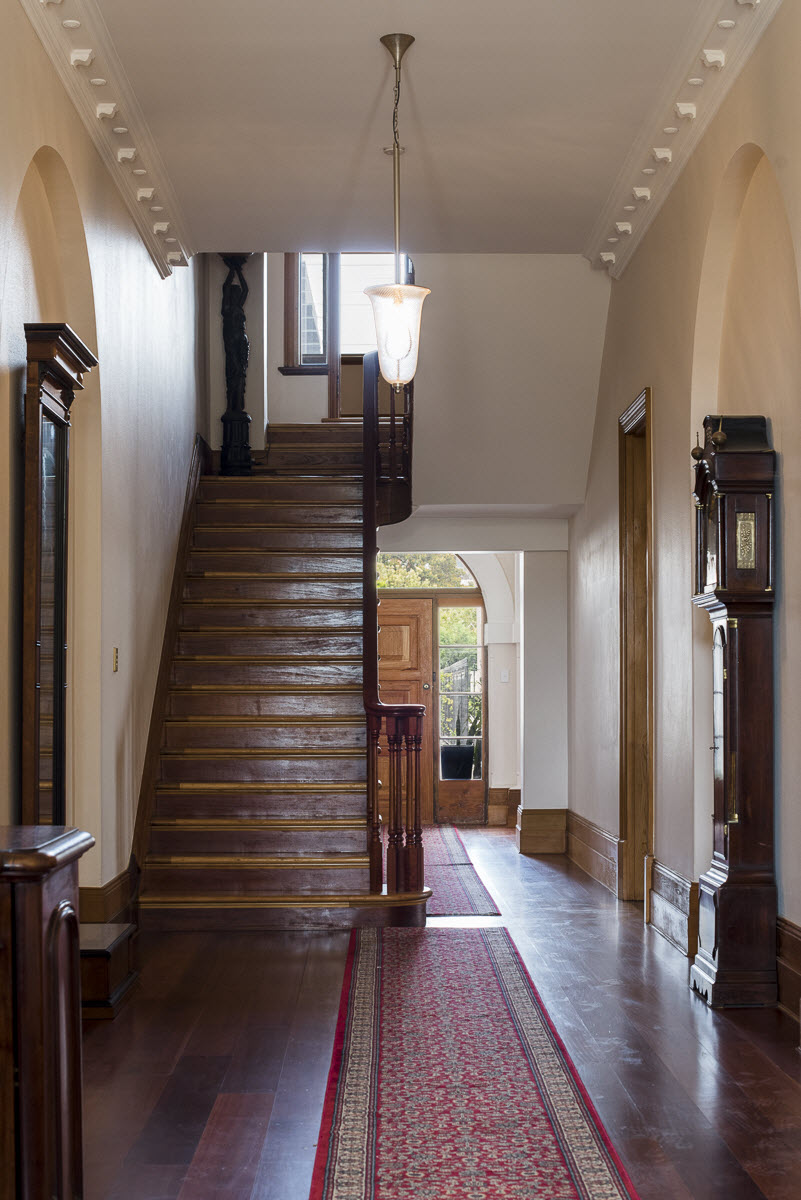 'What we have now is a modern house in a very old shell, but we have kept everything we could and reinstated everything back to as original as possible. For example the skirting boards, most of these are new, but they have been milled in cedar to match the originals, half a kilometre of cedar skirting.

'Overall it took less than 18 months to do most of the renovations inside and was at a point where it was liveable and in December 2015 we officially moved in.' 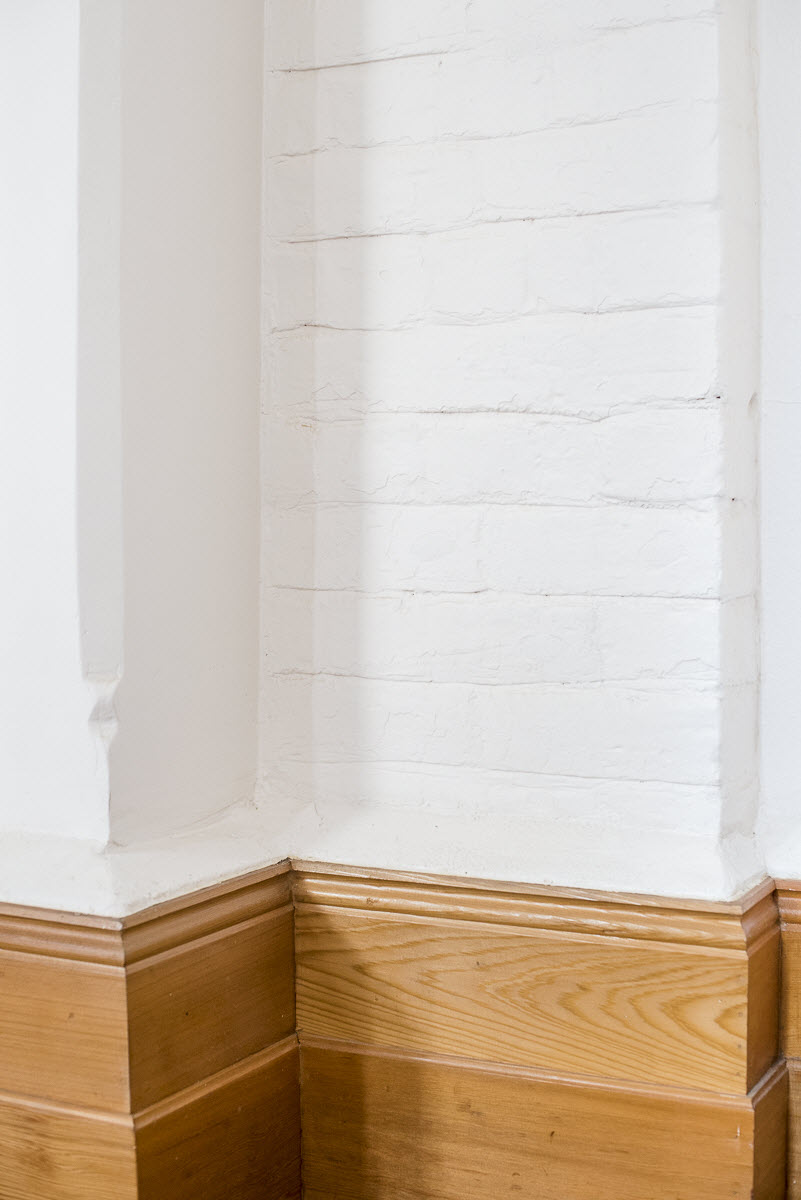 What are you most proud of in the house?

'We love the whole thing and that we have been true to its heritage, but particularly the cedar woodwork and the stairs are the central feature here.

'When we first arrived the stairs were covered in 1950’s lino, stuck on with really strong glue, and the first step didn’t exist. To restore as they are today every step had to be cleaned individually, which took about a day per step. The noses of the stairs needed to be replaced and there was no banister or balustrade. 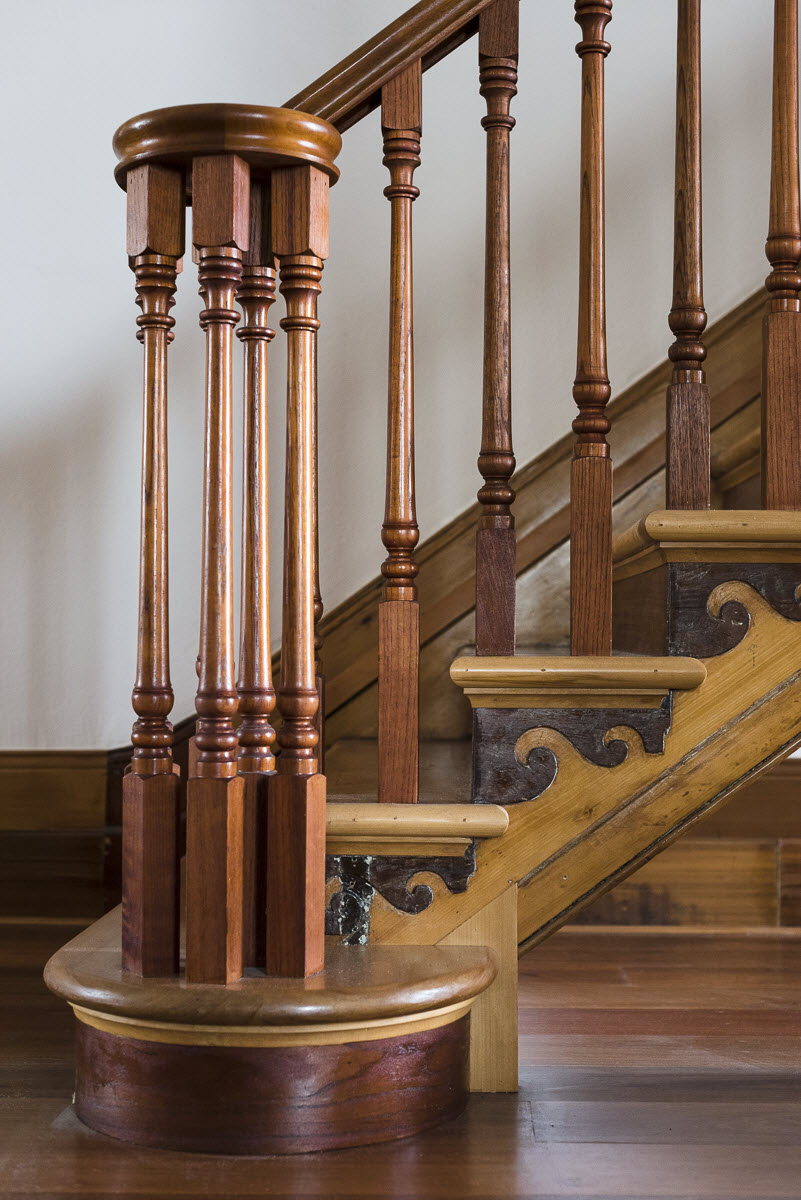 'The interesting thing with the stairs was that you can actually see the indent from where people have walked up and down the stairs, so the tradesman that installed the noses matched the indent from the stairs. He also manufactured the balustrading from the original photographs, he did an amazing job as did all the other craftspeople associated with the restoration.

'Where we could we’ve used local tradespeople, however, the iron columns on the verandah were made in Wagga, the only place that we could get them made.'

What about the furnishings, that must be a job in itself?

'Much of the house hasn’t yet been furnished appropriately, it’s what we call interim and it’s comfortable so we can use the rooms, but we will get to that eventually.

'The dining room is the only room that is pretty much complete. The furniture in here is British, it's been really difficult to locate pieces big enough so that they don’t look silly in this house given how large the rooms are.

'In the hallway is another British piece, Alastair collects longcase clocks, and this is one of the taller ones from his collection. At our home in Canberra we have about twenty of them. Also in the hallway is a beautiful early Australian Cedar sideboard. Slowly but surely we are acquiring the right pieces to do the place justice. Early Settler Recollections at Kotara were fantastic in sourcing stock of selected light fittings from their stores around Australia.' 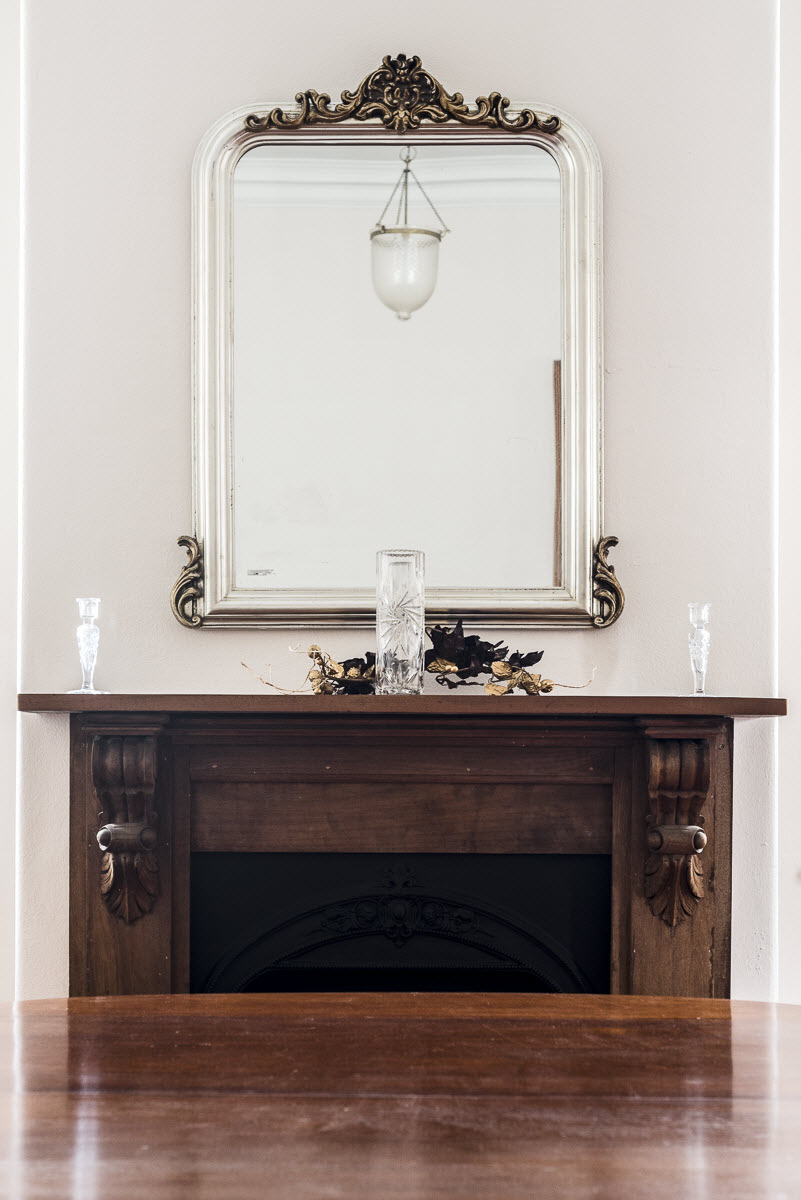 Moving from the dining to the living to the study the size of the home is almost overwhelming with its 16 foot ceilings and a family, meals, kitchen area the size of a small apartment. Upstairs there are four enormous bedrooms - one with its own sitting area and ensuite, using the original spaces of the building. The other bedrooms have their own Victorian-style washbasins. Above the garages there are two multipurpose rooms - storage, play area and occasional bedrooms!

There is a room for everything, dining, living, study, many bathrooms, there’s even a flagpole room,

‘Originally the house had a great big flagpole, which we intend to reinstate one day but not as tall (and not metallic), this room gives you access to the roof and to change the flag.’

Then there is the two-storey verandah

‘This has been a project all on its own. All the iron balustrades and columns are new, but have been crafted as closely as possible to the original and all the columns were made based on old photographs. It’s been a challenge!’ 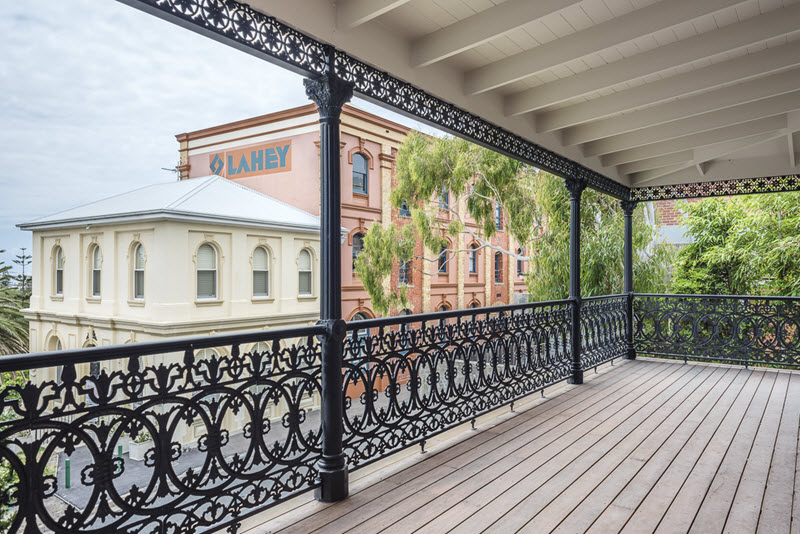 'Not really, our first house was in Windsor, in the UK, and that was originally built in the 1900's so we’d had an old house before which required internal work but nothing like this. We weren’t worried by that though, we could see what needed to be done and had a clear vision of what we wanted to achieve for this magnificent building. Based on watching restoration tv programs, when we received the estimated cost to complete we doubled it, and were close - and that was without the verandah.

'We’ve made decisions along the way that we knew would increase the cost, for example, we used cedar, but we wanted to be true to the building. We could have done it cheaper but we chose not to, we wanted to do it properly, attention to detail has been paramount.

'We’re really proud of what we’ve done, we’ve rescued it and added to the heritage importance of the area.'

What prompted you to take on a renovation such as this?

'I am not originally from Newcastle, but our daughter moved here, so we were visiting regularly and we were always looking at old homes to purchase and renovate.

'We were looking here and also the Rocks in Sydney, but we were wanting something that we could renovate, not something already complete. This house was suggested to us, but we were warned it was a big job. However when we were first shown through we just fell in love with it. We could see that the building was really robust, it is triple brick and it is solid, the joists are enormous, and it was perfect, it had such potential.' 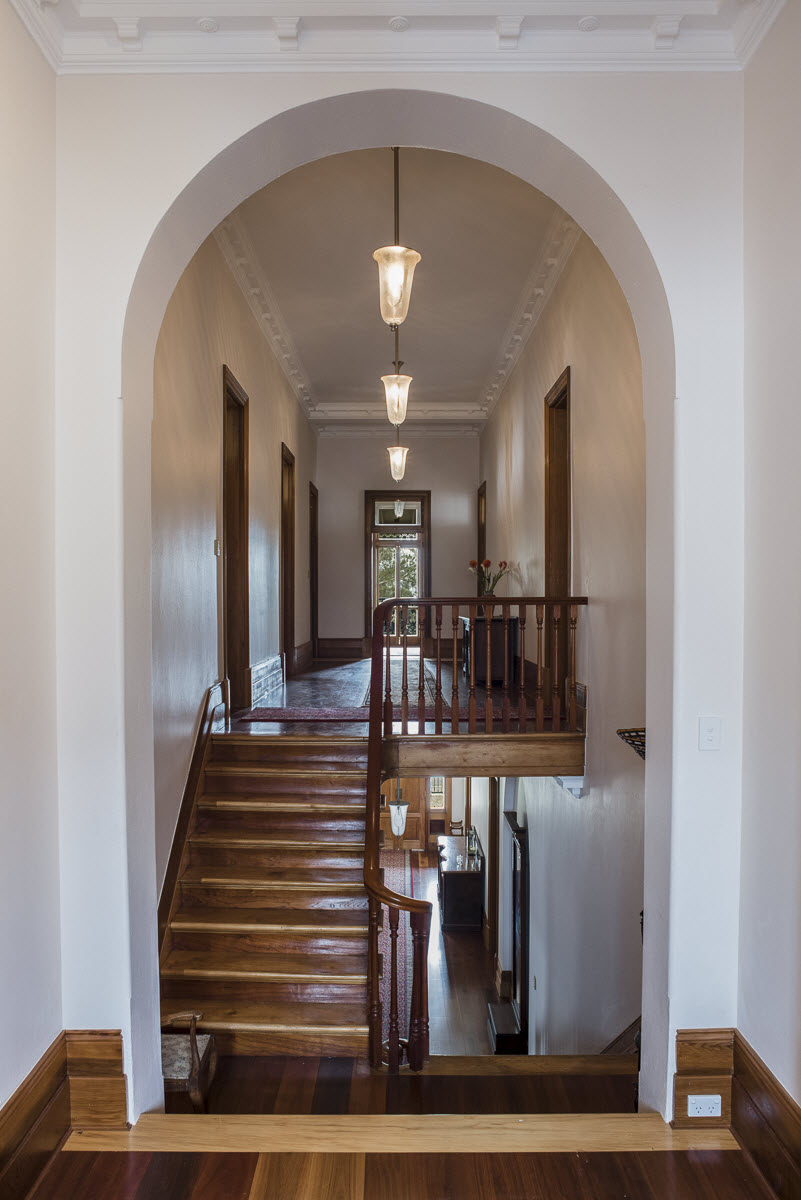 Can you tell us a little bit of the history of the home?

'It was built originally because the sailors had nowhere specific to stay when they were in port, so they would either find themselves a land lady or spend a lot of time in the pubs. Apparently they sometimes woke up the next morning heading out to sea, signed up on a new vessel!

'There was a gentleman by the name of Reverend Coutts, who was an amazing man, he actually married the first Prime Minister and his wife. He was a local minister and he was concerned for the plight of the sailors whilst in port and wanted them to have somewhere safe to stay. So he spoke to the NSW Government and requested some land to build a safe house for the sailors. He also provided a large amount of the funding and this is what they built.'

A project such as this must have caused some headaches along the way, how difficult has it been?

'It has certainly had its moments, there have been many challenges and decisions to reflect the true nature of the building but also make it suitable for modern living. It has been amazing to see it take shape, to transform from a derelict oversized pigeon coop to marvel at the craftsmanship and the care that the tradies have taken throughout the project.

'Looking at it now we are really proud of what we have done and hope it will encourage other people to do likewise as well as appreciate the heritage of Newcastle. We love to share the history of the building and its restoration with passers-by and are heartened by the thanks we get from many of them. We hope to be custodians of this great building for many years to come.'

If you are interested to learn more about the restoration of the Coutts Sailor's Home visit the Blog maintained by Diane for the full account.