I feel like being an artist is pretty luxurious. I get to muck around and get to do stuff that I love and it’s nice to support something bigger than me

Originally from Port Fairy, a small country town along the Great Ocean Road, Jo Dyer is one of Newcastle’s aspiring young artists with an incredible knack for creating artworks and sculptures.

Kicking off her solo exhibition last Saturday at Gallery 139, we caught up with Jo to chat about her influencers and inspiration, her work, and of course, her exhibition; Garden State.

Have you always been a creative individual?

I’ve sort of dabbled in lots of different things since I was a kid…I remember when I was probably 9 or 10, dad went to Eckersley’s and bought this really expensive watercolour set for me, like artist quality paint which you normally wouldn’t spend on a 9 or 10-year-old.

Tell me a bit about your time at University…

I tried a bit of everything at Uni. I started in Communications and did a bit of writing and knew it wasn’t for me. My mum and my sister are both psychologists, and we’ve always had really interesting conversations about thoughts and emotions and figuring all that out. So, I did start a psychology major in my Bachelor of Arts degree, but it was just lab reports, you don’t really do a lot of working with people until way down the line. It occurred to me that I’d really wanted to get back into painting and drawing so I’d just decided to drop the psychology and enrolled in painting and drawing instead. Instead of switching to fine art, I just did a creative art major and sort of chose a lot of the 2D media subjects out of the fine art degree. 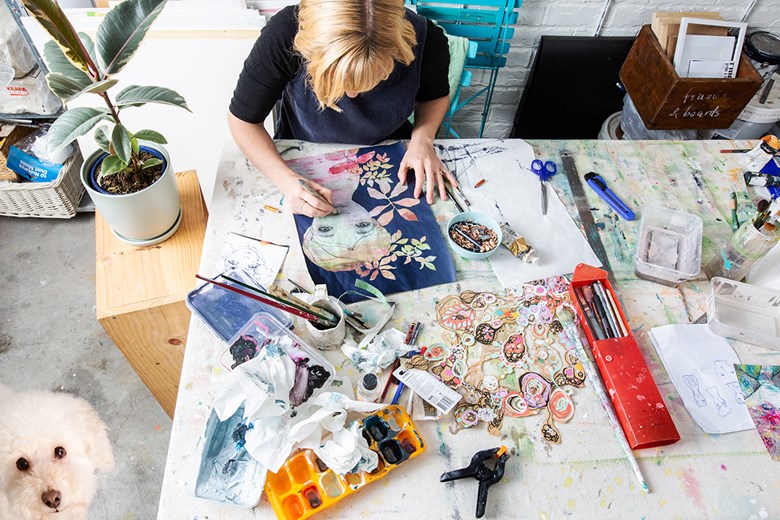 What are your thoughts on the creative scene here in Newcastle?

I think it’s really vibrant. I mean obviously it’s not as big as Melbourne’s scene, but I feel like it’s always been a kind of creative city even though it’s got that steel background. It’s quite a close-knit community…I had a little shopfront for 6 months and had different studio spaces. I did the Olive Tree Markets after I graduated…seeing a lot of commercial spaces pop-up that are creative collaborative spaces is really great; so yeah, there is a lot happening.

Has your understanding and experience with Psychology affected the way you create your work?

Yeah definitely. I feel like my work is very emotive; people often say that my figures look sad but there's a bit more than that going on. My work reflects my state of mind or is a way of trying to map that out. I haven't always felt confident about showing my inner workings, but I am starting to get a bit more relaxed about that and think well actually this is what interests me and maybe it will interest other people.

There are often two halves to what I create. There's the connection to nature which I associate with being very peaceful, then there's the representation of all the stuff that goes on in my head which I call the 'blah blahs'.

The work in the Garden State exhibition explores connecting to nature in a therapeutic way, based on my experience of spending time in my garden after my Dad died in 2015. 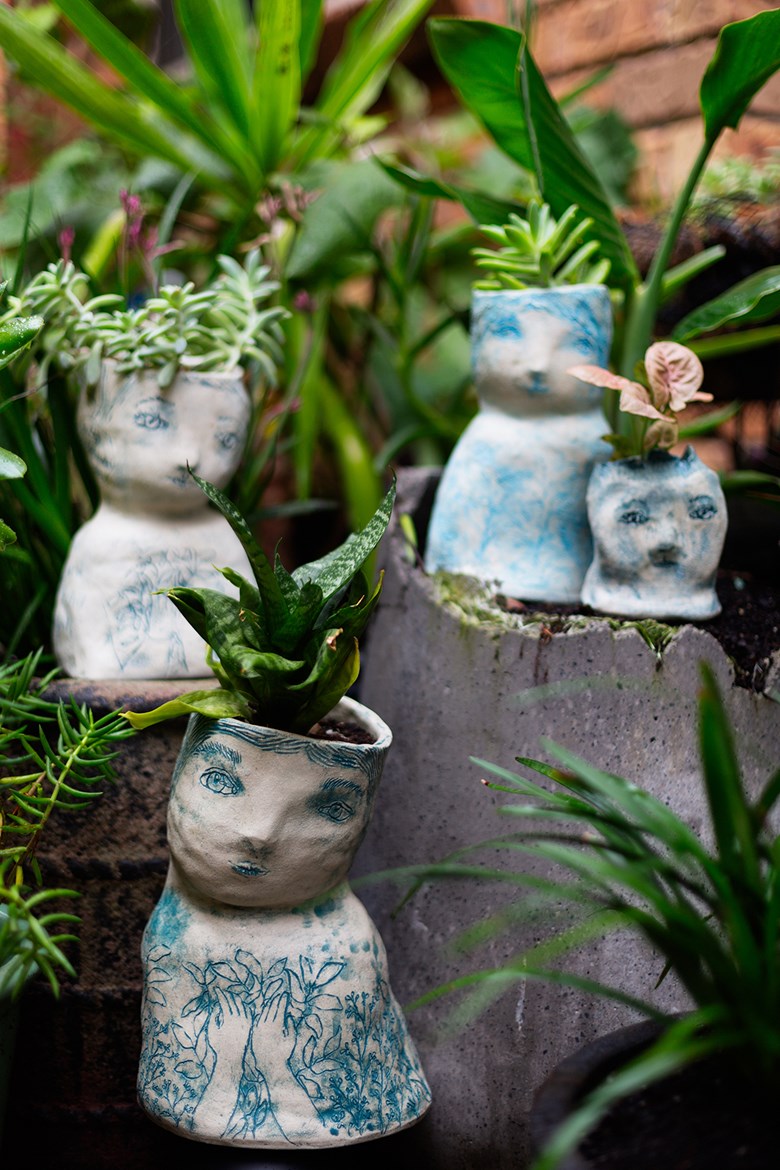 Who is your creative inspiration?

There's a lot of really great Australian artists, and two of my favourites would be John Olsen and Mirka Mora, I think they're both 90 now and they seem like really interesting characters. They both have a really playful, joyful aesthetic which I guess is what I'm trying to capture in my work too; that kind of creative energy.

You work out of your home; some people would seriously struggle to stay on task if they did that! How do you keep your focus?

It's good and bad. My analogy is that I'm a bit like a bee. When you watch a bee collecting pollen it looks like it's all over the place. I tend to work in circles, I'll start something then I'll pick something else up. So, I'll be doing something in the studio and think oh I'll put on a load of washing; you do get very distracted. But there's the convenience of being able to just duck in and dabble when your studio is at home so I actually end up getting more done.

For the last few weeks, my housemate and I have also been making ceramics on the coffee table in the lounge room. We'll watch a movie and relax while we're doing it. 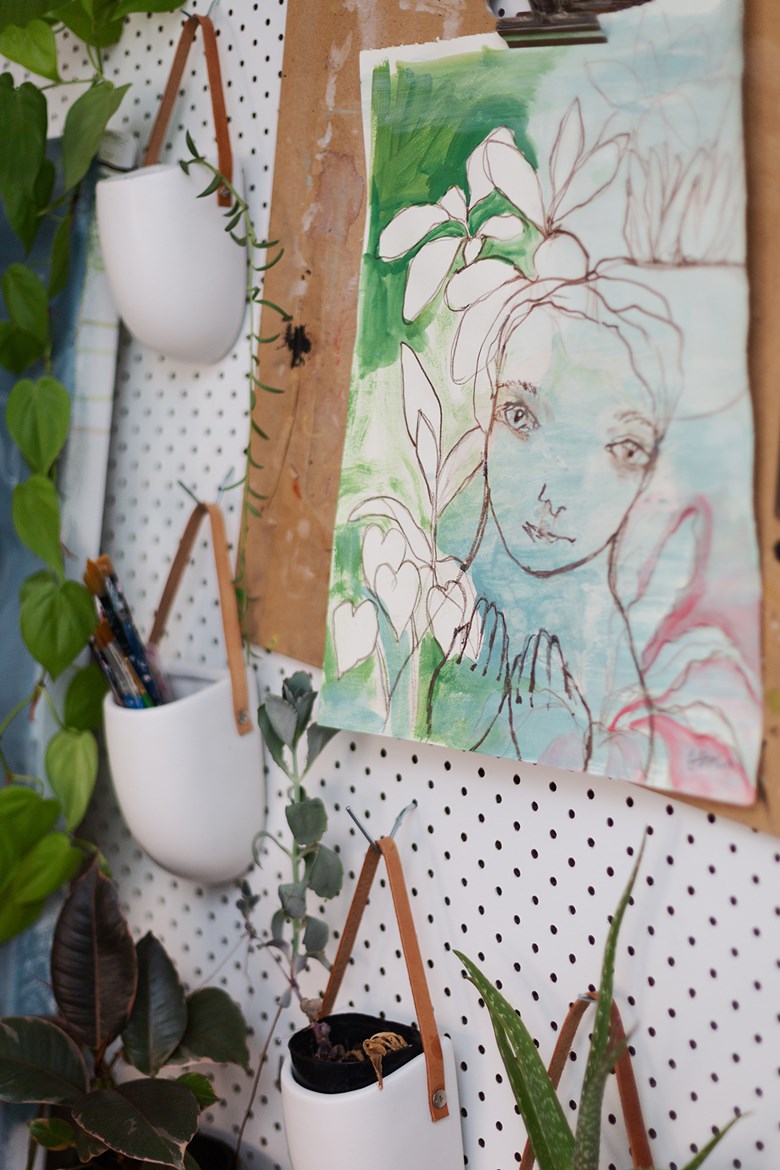 We use to see some of your work at the Olive Tree Markets, how come we don’t catch you there anymore?

After I graduated I started to do a bit of illustration work and selling at the Olive Tree Markets; which was a really good launching pad for me because it was such a great way to get feedback from people straight away. You can instantly see what works and what doesn't.

I kind of realised that I didn't want to keep creating prints and making a business out of my work that way because when I was running around trying to organise prints to sell, I didn't feel like I had time for the creative side. I've gone back to having a day job now because this way I can work more slowly and focus on creating work that I would like to exhibit.

Have you got any advice for young creatives just starting out?

Having the confidence to really pursue something that interests you because everyone has such diverse interests. We all do get swayed by current trends and things like that, but I think what makes work really interesting is the artist's own story. 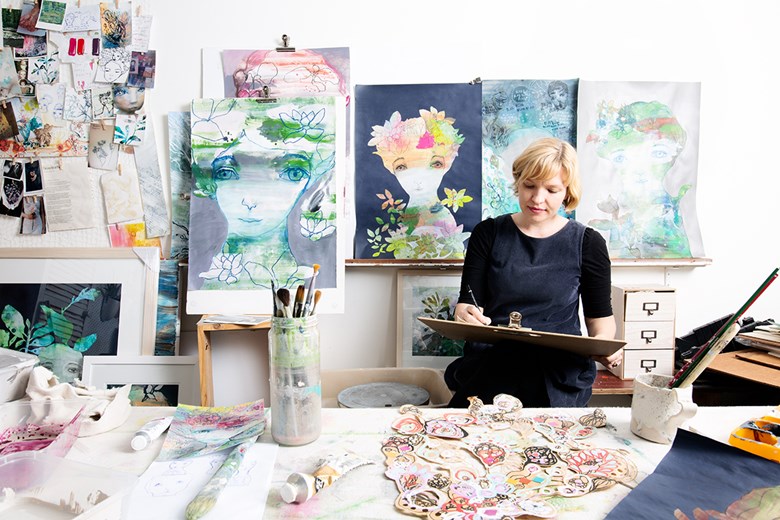