What’s more important to you? The community you live amongst, or living in your dream home? What if you could have both?

The owners of this recently transformed home in Hamilton have achieved just that. Having outgrown their original two bedroom cottage, when the opportunity came up to purchase the cottage next door, they jumped at it.

For this family of six, Hamilton symbolises everything about home. With community at its core, Hamilton’s friendly vibe welcomes creatives, professionals, retired locals and young families in their droves. For many, once they make Hamilton home, they simply never want to leave.

In 2015 Mark Spence from Anthrosite Architects was briefed to conceptualise how to merge these two original cottages into one. The brief was to amalgamate the two cottages into a single storey house with privacy from a nearby apartment block, whilst retaining the original charm and maximising natural light. It was also important to the owners to respect the existing streetscape and retain as much original form as possible.

Flexibility in the way individual spaces were used was also an important consideration in the design to accommodate the changing needs of four growing children and to provide enough space to comfortably entertain their large extended family.

The owners were keen to reduce waste and upcycle as much as possible. The plan was to keep both cottages and join the two to create one unified space. However, as work progressed, it became apparent that the original cottage couldn’t be salvaged. Having lined up a home removal company to take the existing cottage and re-locate it, the deal fell through so when the inevitable demolition happened, much of the timber was kept for up cycling, along with original leadlight windows.

Most of the adjacent cottage was kept, and has retained its original features. Its quaint, original facade gives nothing away as to what lays behind those weatherboard walls.

The driveway that ran between the two original houses from the street to the backyard garage, is now a tranquil courtyard which forms the centrepiece of the home. The original garage is now a pool house which doubles as a games room.

The cottage that was demolished was gable roofed, like so many others in the street. In a mark of respect to their old home and to their neighbours, the new structure mirrors the form of its predecessor. With a monochromatic colour palette, and carefully selected materials, the geometry here is the hero.

Eli Conroy from local residential building company, Built by Eli, undertook the build, with Kyle Henderson in the role of Site Supervisor.  They contributed their own ideas to the project along the way. For example, it was their idea to replace box guttering with custom brushed aluminium single span gutters, which is both aesthetically striking but also cheaper, and harder wearing. They engaged the services of Jake Ferguson from Hunter Valley Garage Doors for the manufacturing of the striking carport facade, constructed from vertical timber battens, which are a design detail that is replicated at the front entry and beyond.

Whenever I’m fortunate enough to explore one of Anthrosite’s finished projects, I’m struck by their use of juxtaposing materials, their collaboration with local artisans and their masterful window placement allowing for that difficult sweet spot of capturing natural light whilst still retaining privacy.

Once again, Mark has teamed up with Matt Oates from BrickSlayer for the brickwork that appears extensively both internally and externally throughout the home. 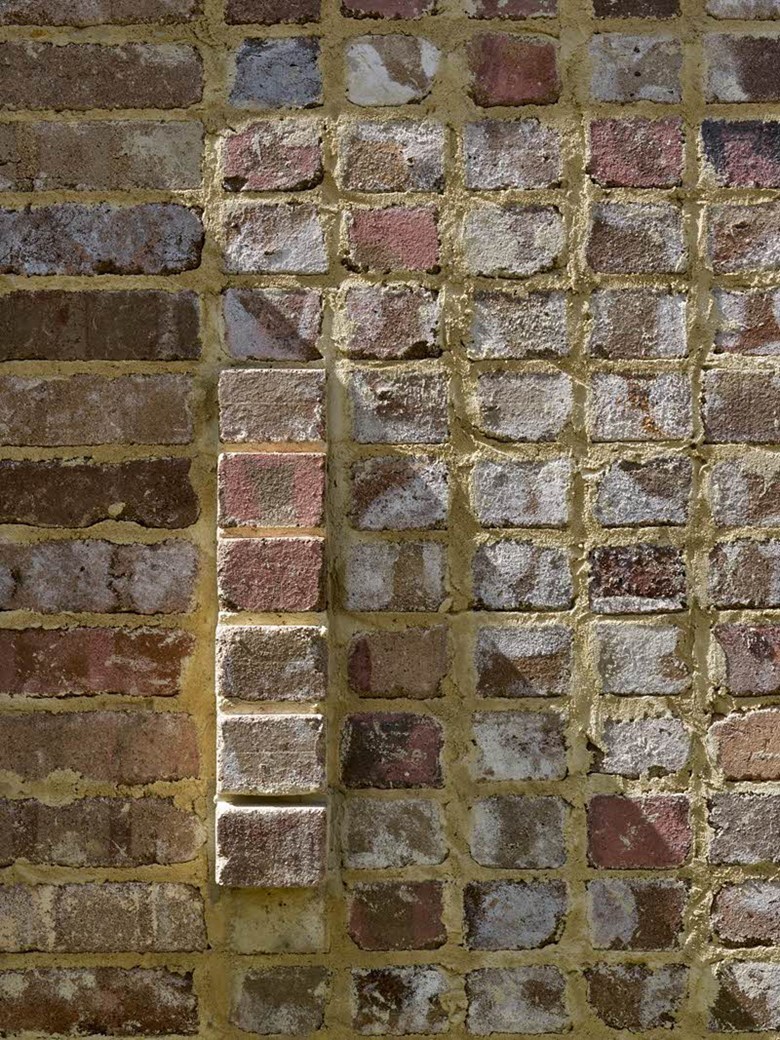 The imperfect finish with a variety of laying styles used has resulted in a building that looks like it could be a 19th century farmhouse. External lighting is camouflaged within cleverly corbelled brickwork.

“We worked closely with Matt during construction and discussed on site throughout the process what would work. We would then go back to the office and draw it all up in 3D for him to work from. Working together so collaboratively throughout the project works well. We even designed our first custom letterbox that lights up of a night”.

The owners were very engaged in the project and the project’s success is very much due in part to their involvement. They engaged local designer, artist and fabricator, Jono Everett from Everett Creative to conceive ways to re-use much of the timber from the demolished cottage. Jono is the talent behind the internal fit-out of the Parry Street Garage, a massively popular 200 seat restaurant in the heart of Newcastle. His work features throughout their home, giving the original timbers new life. 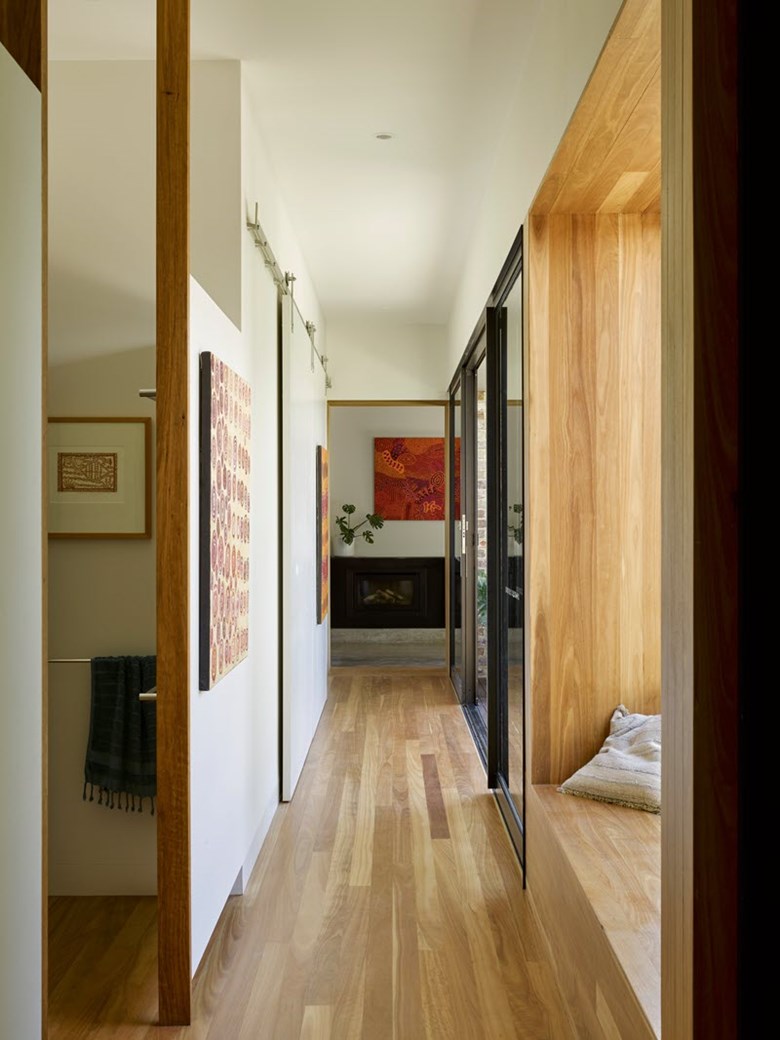 Mark points out Jono’s work throughout the house, “Jono made the 4m dining table. It’s beautiful because it’s constructed from a collection of different timbers. He also made the custom pendant lights, the tv unit with copper front, and the portal leading from the bedroom wing to the living room”.

The warmth and texture of the internal timber work and brickwork is offset by the minimal effect of polished concrete floors and large glass doors and windows. The simple flooring choice allows the luxury of layering with soft furnishings without the risk of the interior feeling overdone or cluttered.

To combat the noise of an open plan house, hard floors and a large family, acoustic engineering has been used in the ceiling. Perforated plasterboard and batts have been used so effectively, that it can be difficult to hear voices from one end of the room to another.

Not much has gone to waste in the creation of this new home. As well as Jono’s brilliance in putting the old timber to use, the original leadlight windows from the demolished cottage have been used, original solar panels placed on the new roof and even the old hot water system and dishwasher are quite at home in their new surrounds. 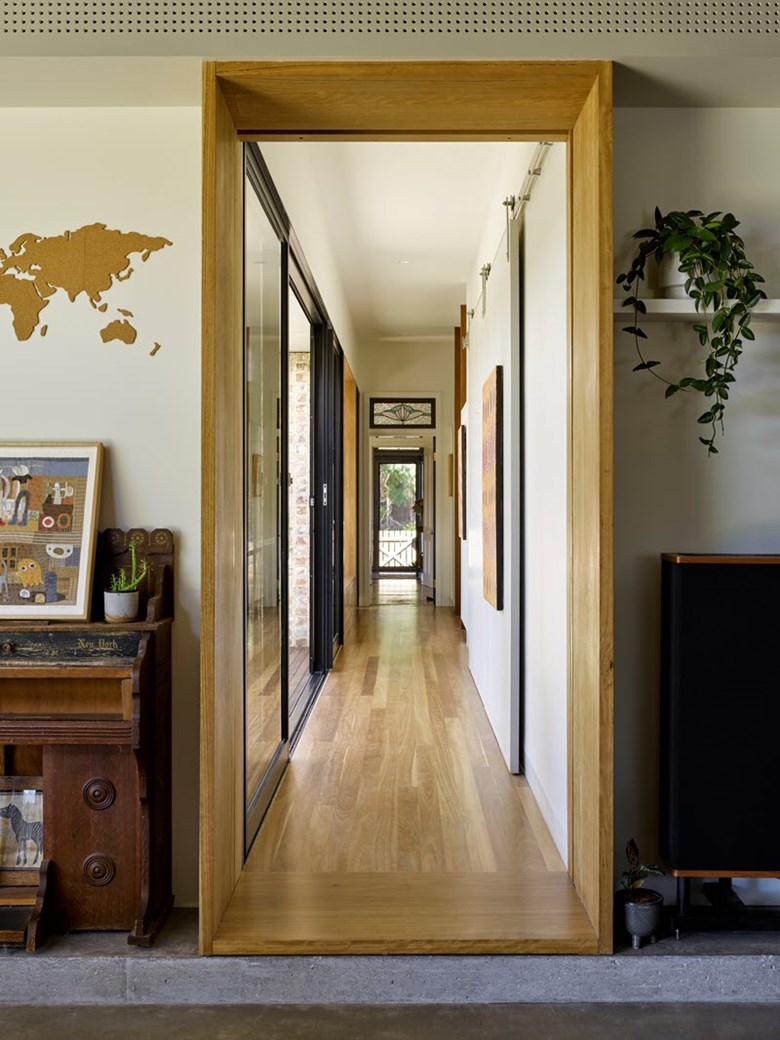 A hallway running adjacent to the centre courtyard has cleverly been designed as a study space for the four children. With a built-in desk running the length of the hall and four individual lockers and cubby holes opposite, this is a genius use of space providing plenty of storage for school bags and projects, all with a tranquil outlook over the courtyard and close enough to the hub of the home for Mum and Dad to keep an eye on them.

A music room doubles as an en-suite guest room and two of the children’s bedrooms have been designed to easily be converted into one large space by way of a floor to ceiling moveable dividing wardrobe unit come the time that one or both of them leave home. The kitchen is another example of the success of the owner’s input.

“I was uncomfortable with the amount of space our clients wanted between the wall cabinetry and the island bench,” says Mark.

“I usually prefer to have less distance between the two. The owners have a large family and entertain a lot so they wanted enough space for people to congregate in the kitchen. “I’m happy to admit the additional space has made all the difference!”

The kitchen was built by Peter Bosevski from Kameo Designs and the home owners couldn’t be happier with their work.

The north facing backyard, which is visible from the front entry is vast, private and peaceful. The owners have done all of their own landscaping and have created a welcoming oasis in the middle of a bustling community. As I walk back into the house from the backyard, I see a pair of croquet sticks and soccer balls leaning against the wall. All that’s missing are the sausages on the barbecue and a bottle of Rose.