When Jess and Paul bought their home in Carrington six and a half years ago, the plan was to embark on a six month renovation. The 1950’s built house, located on a quiet, one-way street in this cute village-like suburb was in near original condition and ripe for conversion. 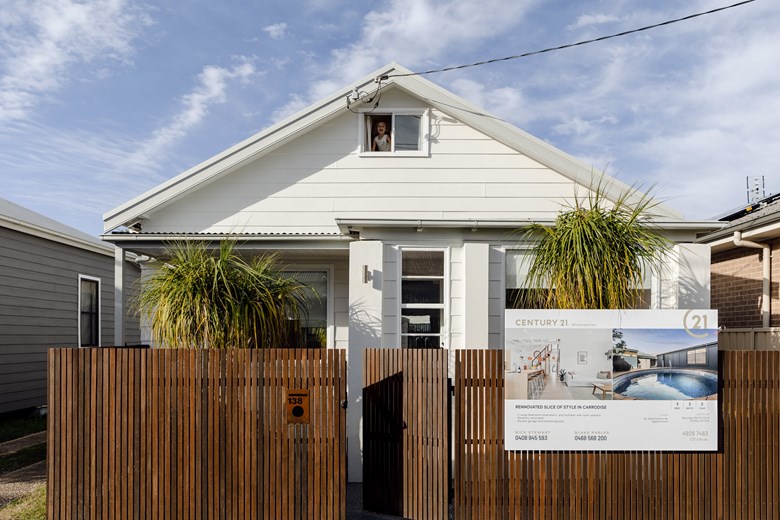 With Paul having been in the building industry for more than twenty years, and Jess’s vision of her future home, the couple had big plans.

You know what they say about best laid plans? Life comes along and has other plans for you! Fortunately, for these two, those plans changed to grabbing life with both hands and following their passion to travel.

A trip to Africa and South America coincided with Jess falling pregnant with their eldest daughter, Eddi. Not long after, Jess fell pregnant again whilst on a trip to Vietnam and along  came their youngest daughter, Bowie. 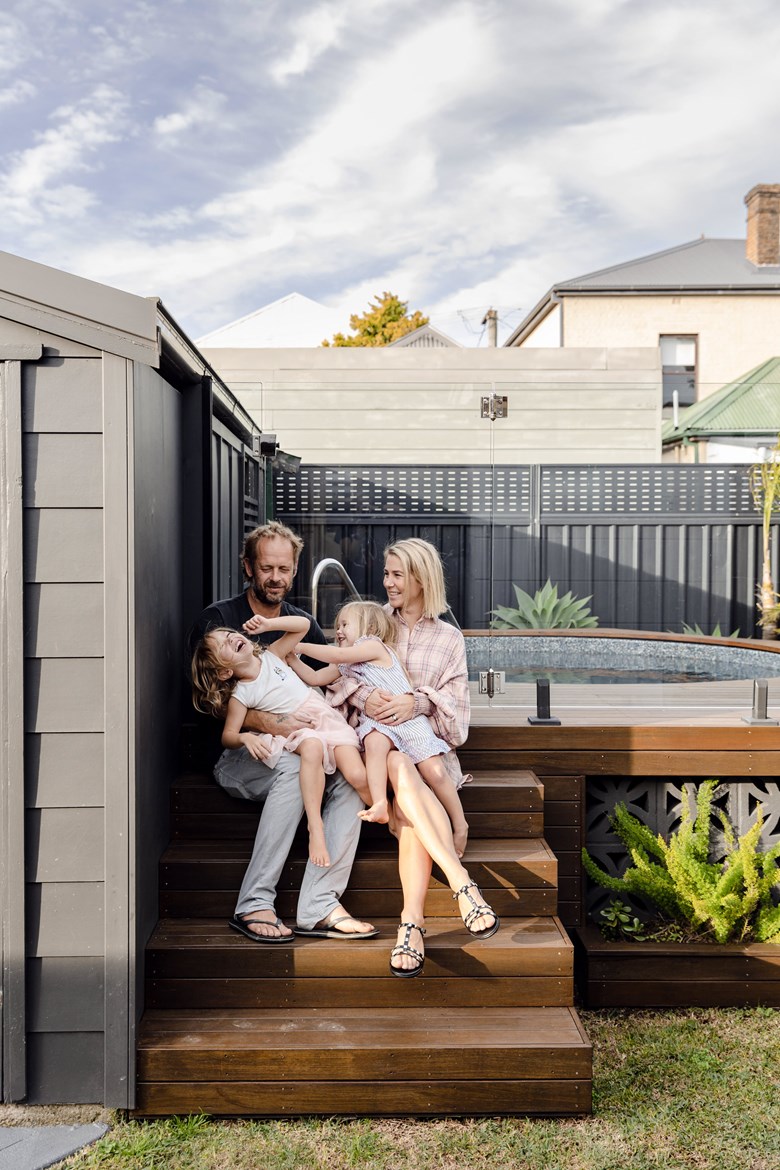 The original renovation became a quick coat of paint to make it liveable and now, six and a half years later, their labour of love is complete.

What was the house like when you first bought it?

“It wasn’t like one of those cute Carrington Cottages. It was a 1950’s asbestos clad house with an outside toilet and awkward floor plan. The outside was a yellowy/creamy colour, and inside there were five layers of carpet and three layers of wallpaper. It was really dark, it hard dark brown bricks inside. The only room still in its original position is the first bedroom on the left as you walk through the front door.” explains Jess. 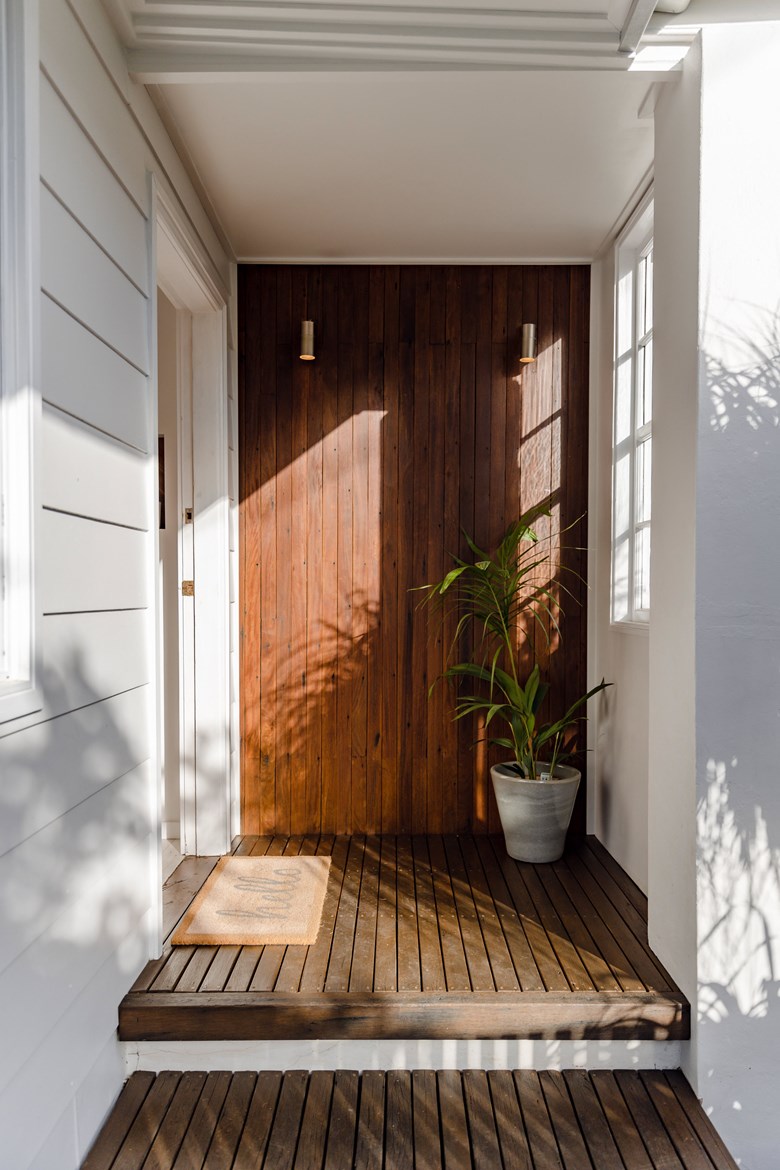 Paul goes on to say, “It was always meant to be a renovation project for us. The mortgage was nice and low so it gave us the freedom to do other things.”

Jess, had you worked on a project like this together before?

“No, this was our first major reno. Paul is a carpenter who specialises in home renovations and custom furniture builds, so he knew what he was doing.” 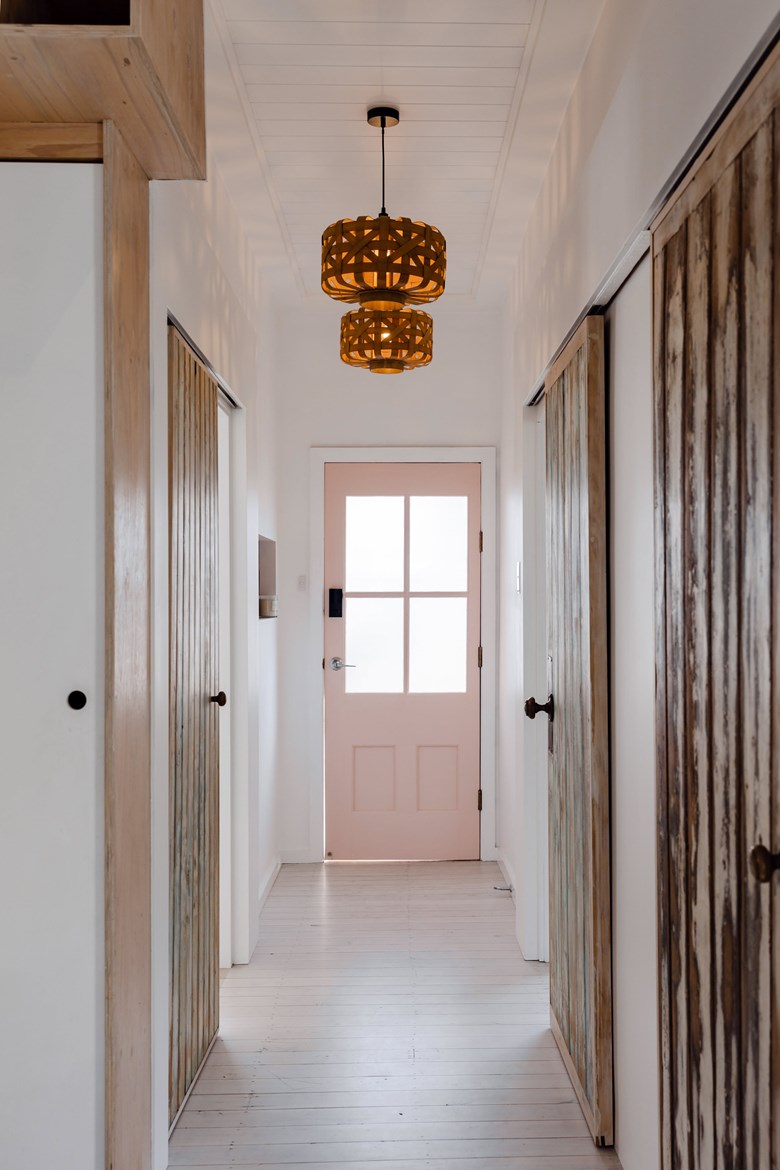 Who came up with the design?

“I came up with the floorplan” says Jess, “but Paul, who is also an artist, came up with all of the design details, like the recess in the hallway wall and the tiling next to the mezzanine.” 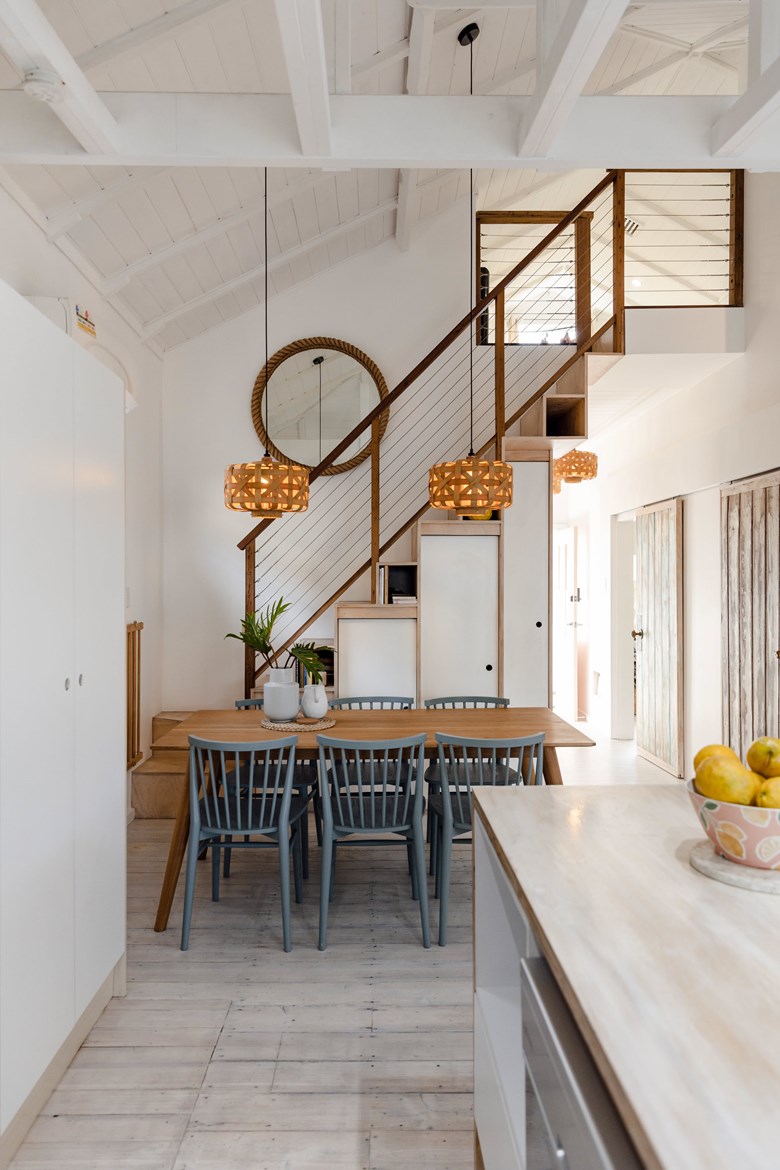 It’s hard to believe this is the same house as the one Jess described to me that stood here six and a half years ago. It has been transformed into a charming, light filled cottage with a bright colour palette, open plan living and cleverly placed windows. No matter where you are, you feel connected to the outside, which is one of the things Jess loves about her renovated home.

“I just love sitting on the sofa in the lounge room. Paul built a high window so I can sit back and see the clouds in the sky. I can also see out to the pool and watch the kids play. I’m really into mindfulness and love to watch the leaves in the trees.”

Paul was able to salvage materials from jobs he worked on and scoured Gumtree relentlessly, sourcing anything from doors to timber. He was also able to collaborate with a friend who is a plumber and was renovating at the same time so they were able to  swap skills and help each other out with their projects. 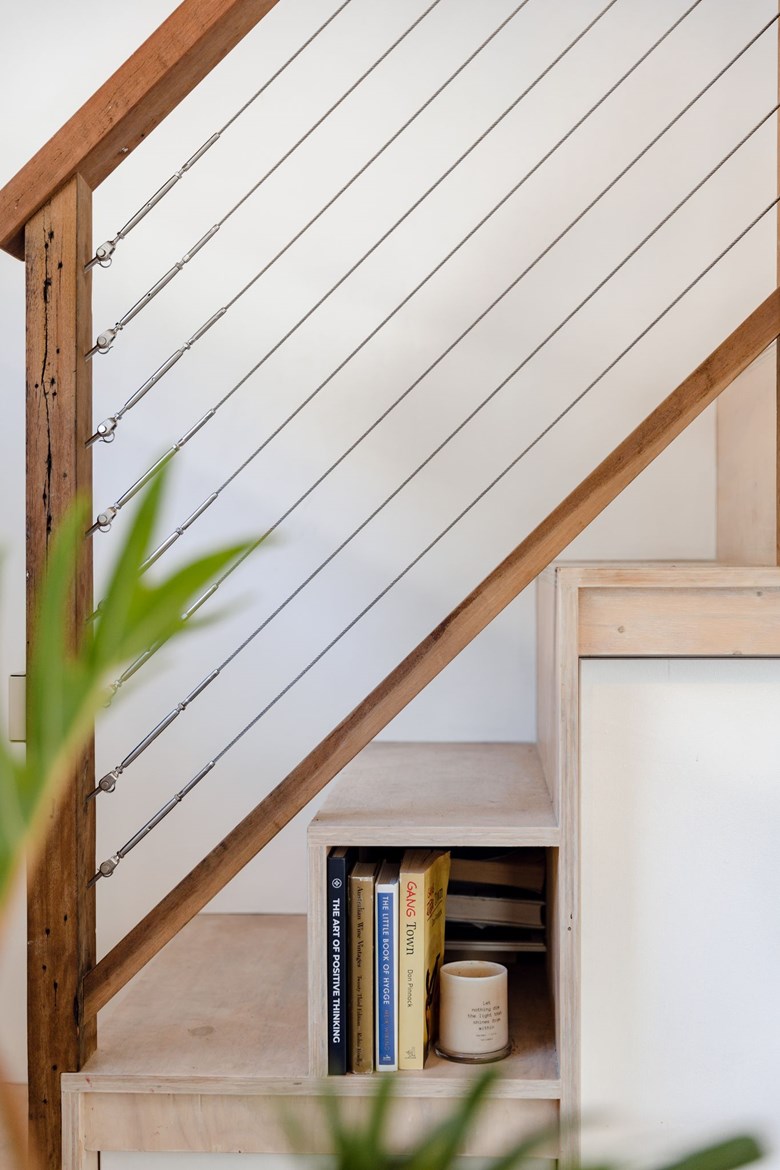 He explains, “we decided to use sliding doors for the bedrooms and bathroom to save space. I found these three doors on Gumtree for $5. The front door was from an old job and didn’t cost anything. The fencing and decking around the pool was also found on Gumtree and had been listed as firewood”.

Jess goes on to say, “He says it was free, or cheap, but when you look at the amount of labour that he put into it, it actually wasn’t cheap at all!”

“When we bought the house it had no character. Now that we’ve been able to upcycle so many things we found on Gumtree, our house now feels full of character and filled with stories from other people’s homes.” 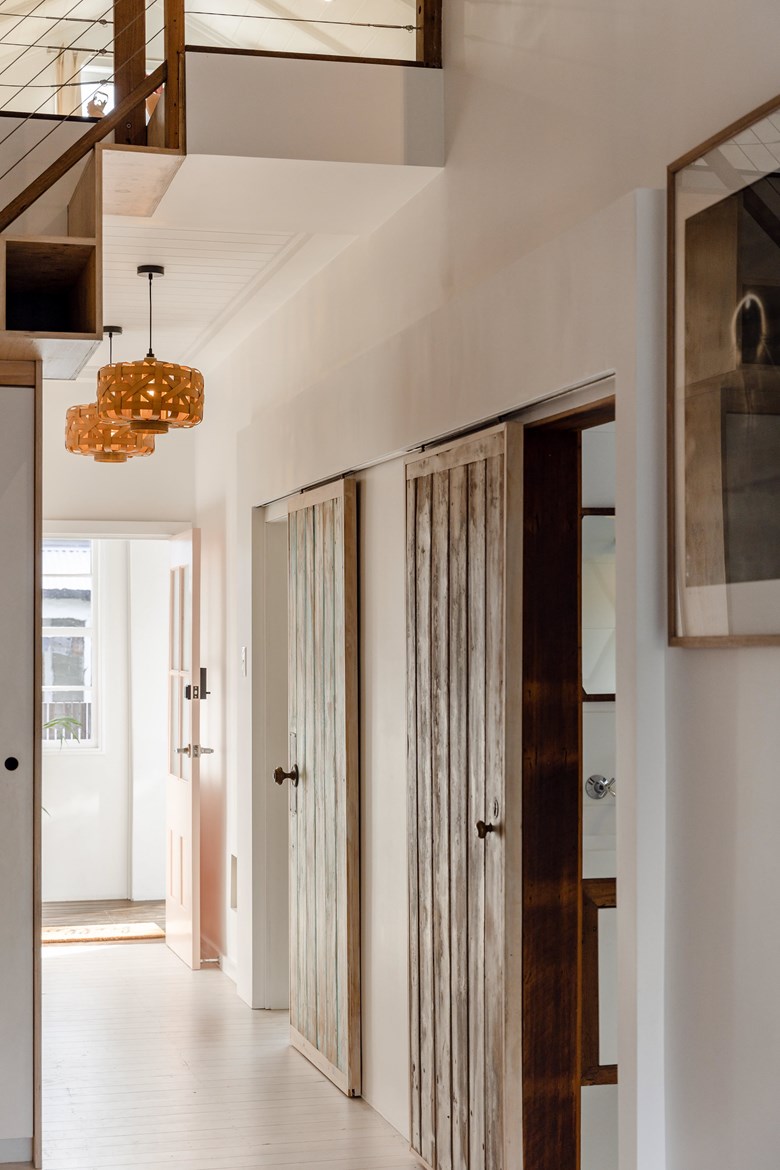 Many of the original materials from the house were re-used in the couple’s design. The windows remained and were spray painted white. The pine flooring was painted with watered down house paint and finished with a lacquer. Cedar that was found behind the asbestos sheeting on the outside of the house was repurposed to build the stair handrail and custom cabinet under the television. 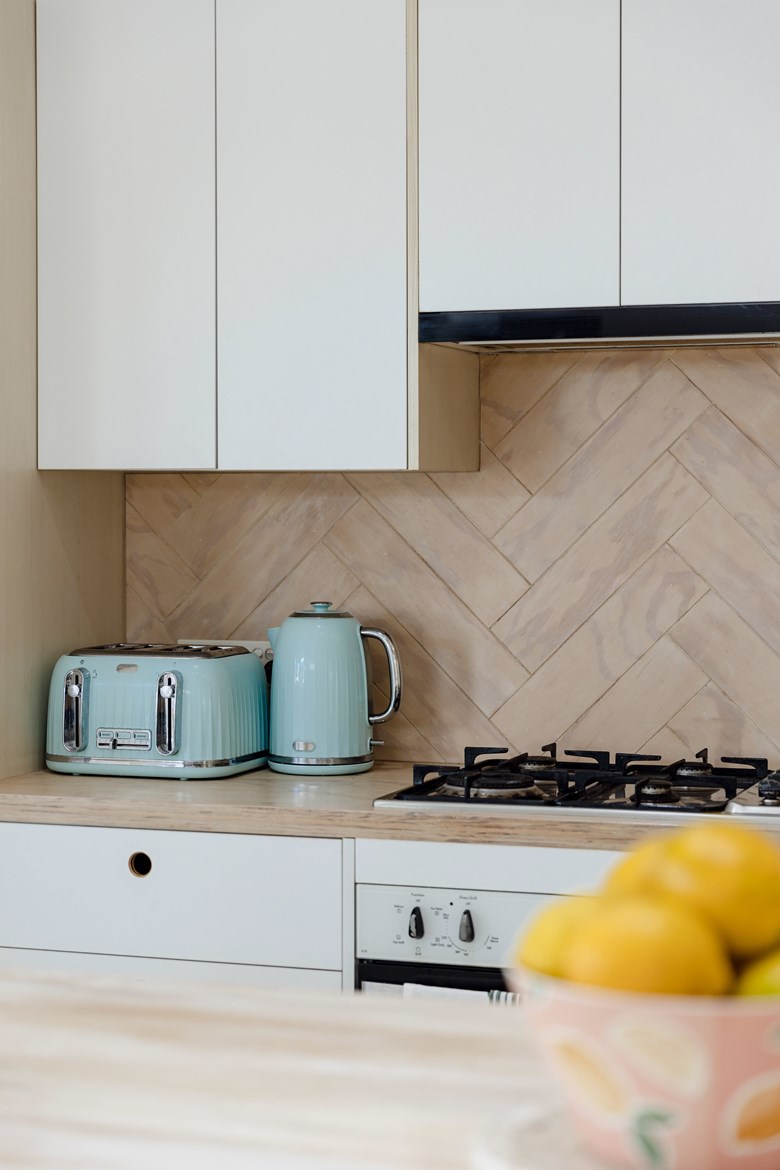 The eye catching kitchen was another of Paul’s custom creations. The only thing in the entire house they actually bought was the kitchen cupboards. The kitchen island was built by Paul from Plywood, which he then whitewashed and lacquered. The splash back was also made from Plywood and features a striking Herringbone pattern. 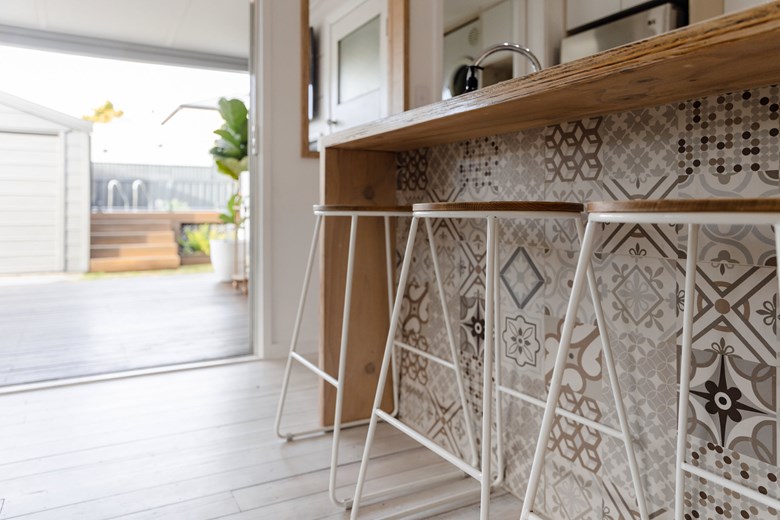 The internal bathroom came just in the nick of time for the couple. Jess explains,

“Paul built the bathroom the week I gave birth!”.

To me, the focal point of the bathroom is a vintage pendant light on a retractable coil that is positioned off centre. In the original floor plan, the pendant hung in the centre of what used to be the bedroom and Jess said she thought it was the ugliest thing she’d ever seen. She’s now grateful they decided to keep it because it’s simply perfect in its new surrounds. 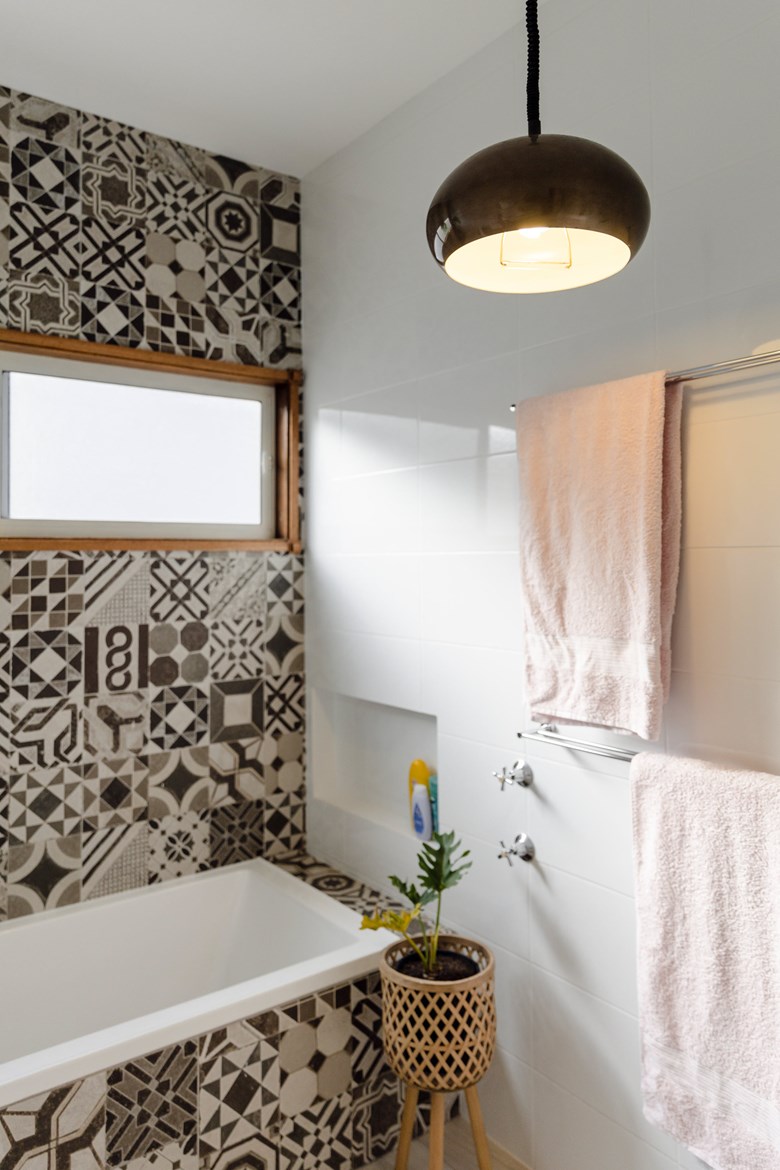 Allowing space for a pool and room for the girls to play in the backyard the couple decided to use their roof space for a third bedroom. The mezzanine style addition with a white painted timber ceiling and beams adds to the sense of space and light in the home. The addition of a staircase then provided the opportunity to add more storage under the stairs and little nooks for showcasing the couple’s collectibles from their travels.

The round swimming pool is from Polyworld in Queensland and is a recycled plastic water tank. Partly in ground and partly above ground, the pool is plenty deep enough for a Summer time plunge for the entire family.

The back deck is accessorised with an outdoor wall-mounted TV and an overhead heater for those cool Winter nights, making it an ideal second living area and place to entertain. 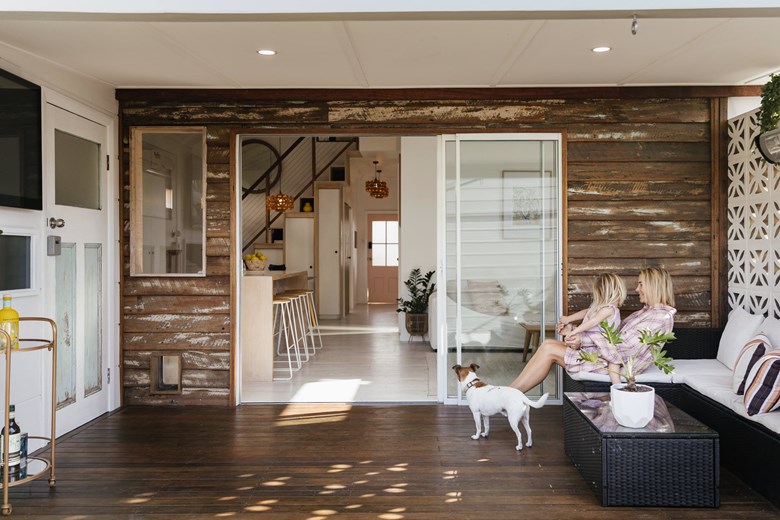 Paul, what do you love most about the house?

Jess goes on to say, “I love our little house built out of love, as a family project. I love the layout. It’s intimate. We have the inside/outside flow and every space is usable. It’s so functional, light and airy.” 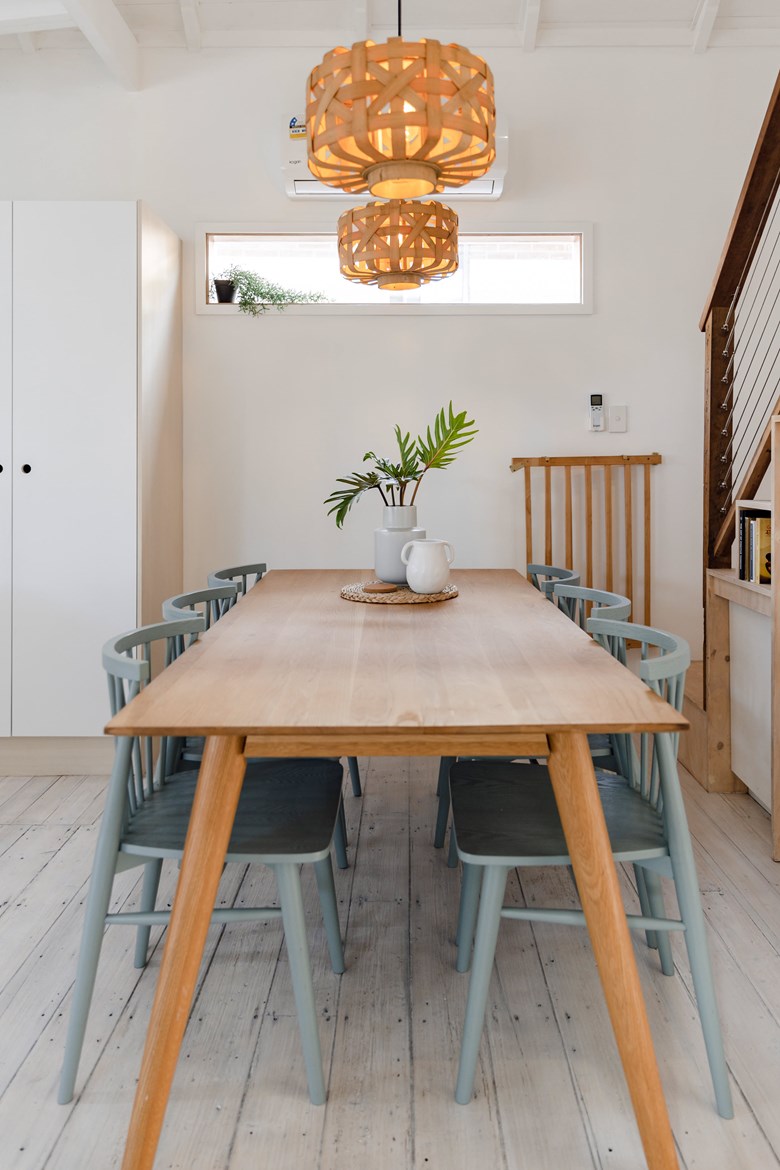 Now that your renovation is complete, would you do it again?

Jess goes on to say, “We have another house in Merewether on a small block so we may rejig the ground floor to take home land space and add to it.”

Paul responds, “I just want to go travelling and come back when it’s finished!” 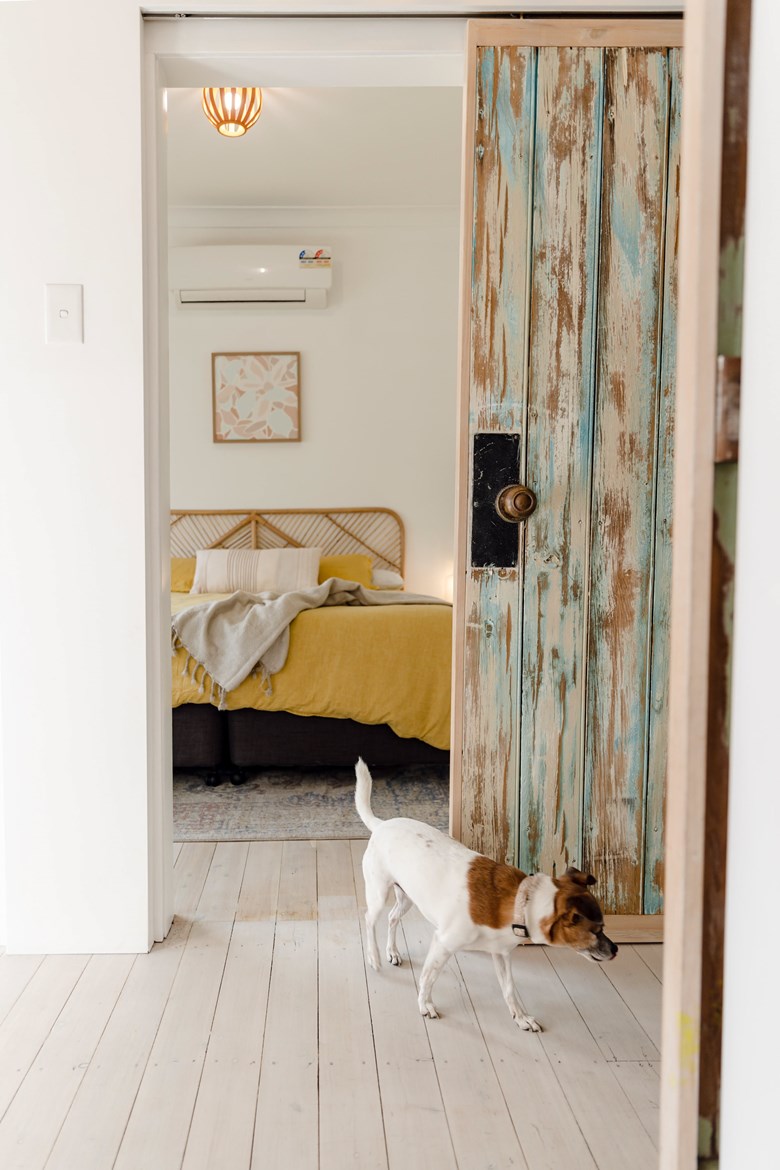 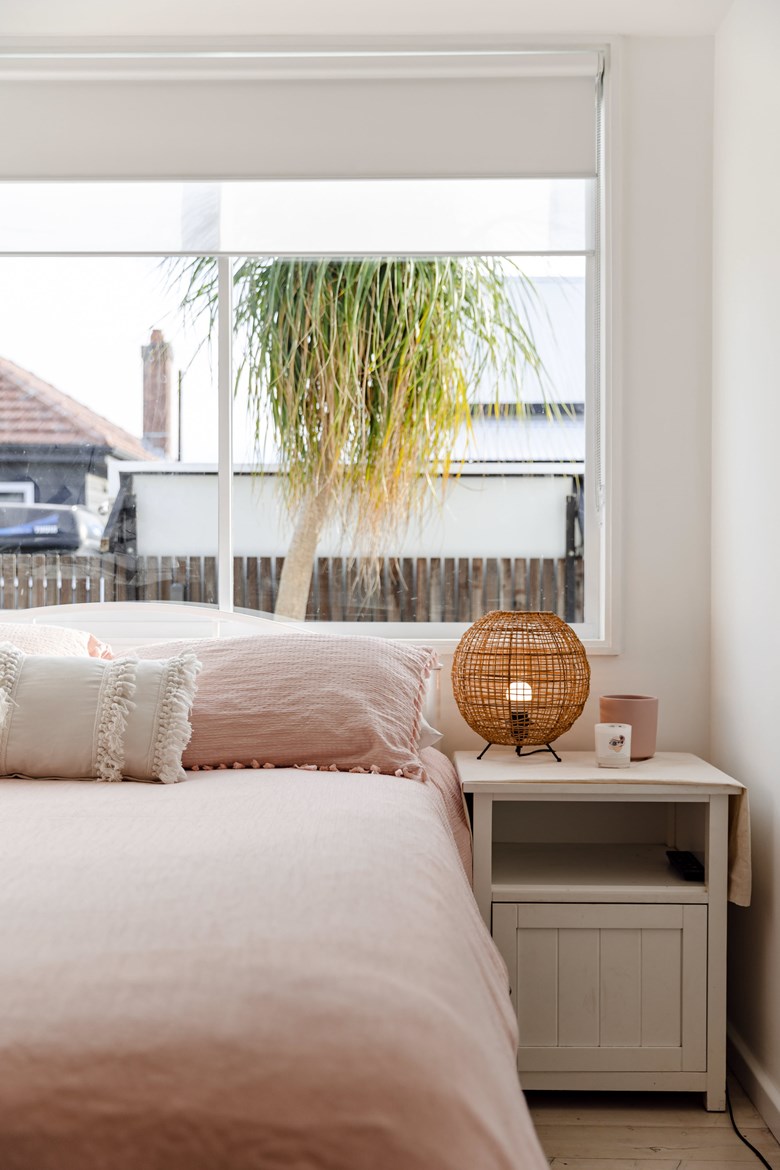 How would you describe living in Carrington, or Carrodise as the locals call it?

“It’s just so easy and accessible. We can walk everywhere, even into the city. It’s such a community, like a country town. Paul has lots of work around here too.”

Jess’s business, The Grateful Boutique and Bouquet (thegrateful.com.au) is just around the corner from their home on Young Street. She describes it as a one-for-one happiness project and social enterprise boutique and posy service. They proudly donate back to the community for every purchase, including to John Hunter Hospital and domestic violence charity, Got Your Back Sista.

Paul’s business, HN Carpentry (handyman-newcastle.com) is in high demand as local word spreads of his quality of workmanship and creativity. 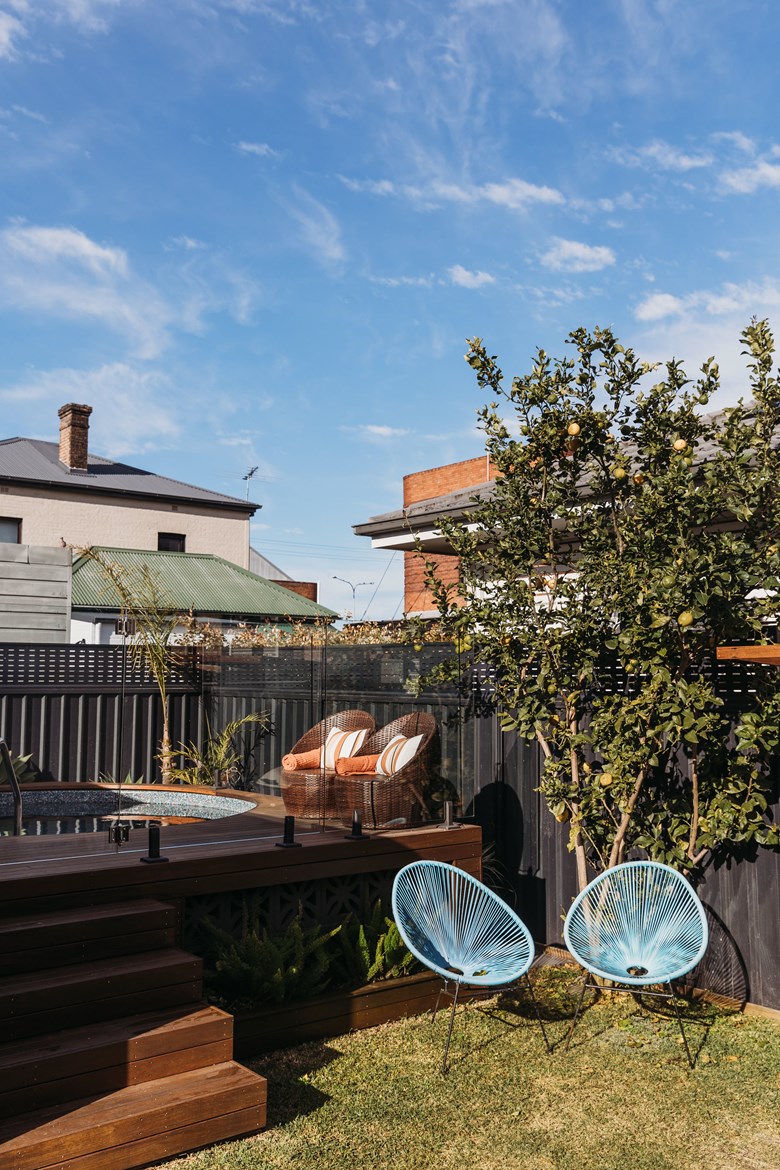 Jess, Paul, Eddi, Bowie and Foo their Jack Russell are preparing to move to their house in Merewether so the great news is, this Carrington gem has just hit the market. Do yourselves a favour, and check it out. You won’t regret it.