Have you visited Newcastle West recently? If you have you may have noticed that's it's bursting with food and drink options, and more recently something new has popped up in the neighbourhood. After a long 18 months of renovations, The Rogue Scholar has opened on Union Street. 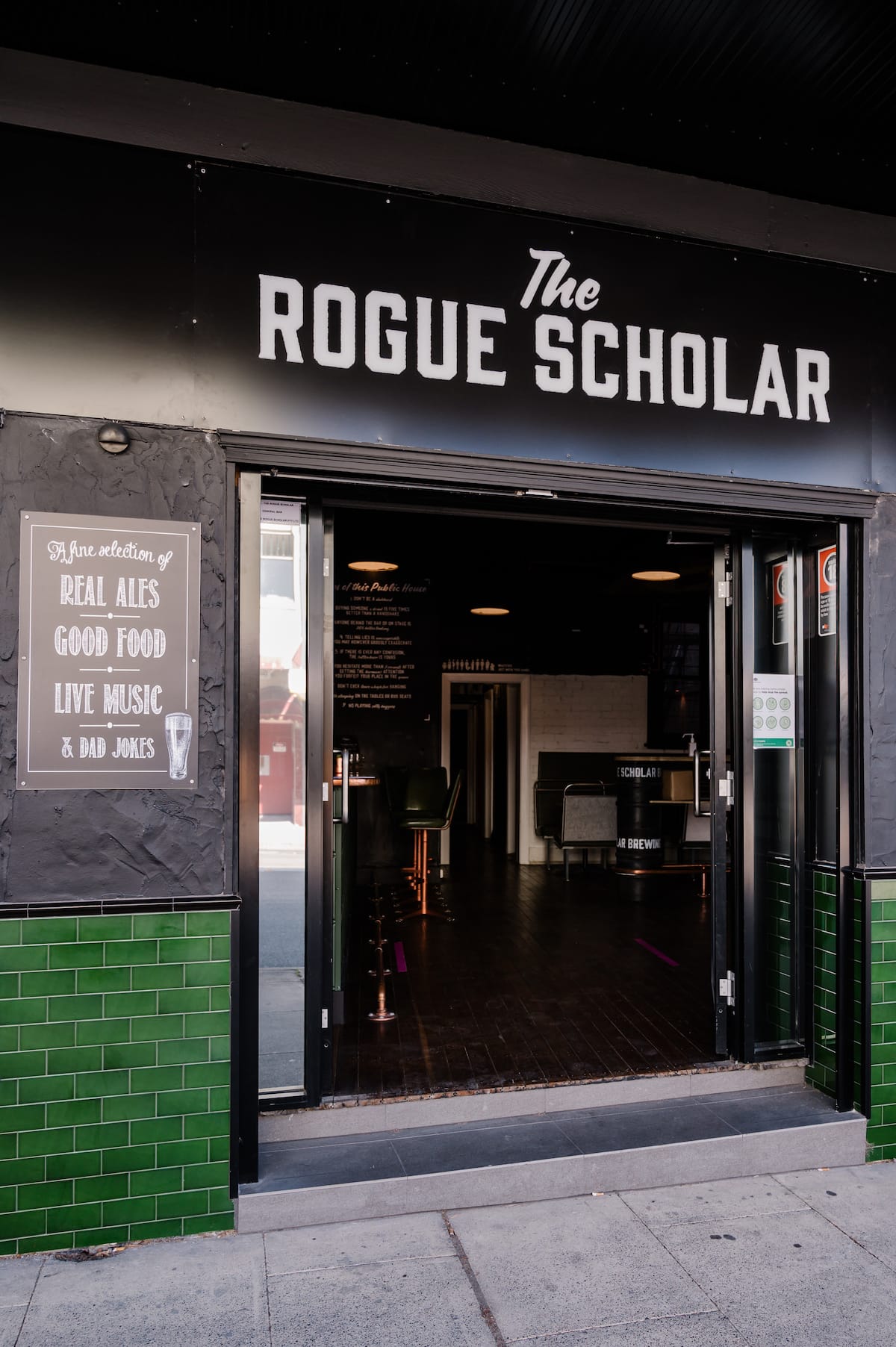 Brought to us by lovers of cricket and beer, good mates Adam, Craig, and Joe have been bubbling behind the scenes to open a unique, one-of-a-kind brewery and bar venue right in the hustle and bustle of Newcastle West.

You might recognise the name Rogue Scholar as the brewery has been making the rounds on local beer taps for the good part of the past three years. Started up in 2015 by local-born Adam Hardy, what was originally supposed to be a part-time business, very quickly turned into 80-90-hour weeks with brewing and wholesaling just taking off!

“I thought it was going to be a part-time job and it turned into a full-time job really quickly, but I just needed more space. I ended up finding a space on the central coast and I’ve been there since then just purely brewing and wholesaling.

“I spent the best part of three years just getting it out and into pubs around Newcastle. Our Ginger Beer has been the biggest hit of them all. It’s on tap in 10-12 pubs permanently in town,” Adam said.

Since its inception, Adam always had the goal of having a front of house venue offering, with a brewery out the back and plenty of live music incorporated. After getting Craig and Joe on board (not that it took much convincing), the trio finally got their hands on the keys to 4-6 Union Street, just 18 months ago!

“We found the right landlord that really supported us and helped us through it all plus we’ve got some great neighbours that have been super helpful through the whole process. We thought we’d get it a lot quicker than we did, but then COVID-19 hit and we used that as an excuse I guess to take our time.”

And take their time they did! We’ve been eagerly awaiting the doors to open since we first heard Newcastle was getting a new brewery and bar venue. But hearing some of the stories that came out of the lengthy renovations plus seeing the venue in all its glory; it was definitely worth the wait. 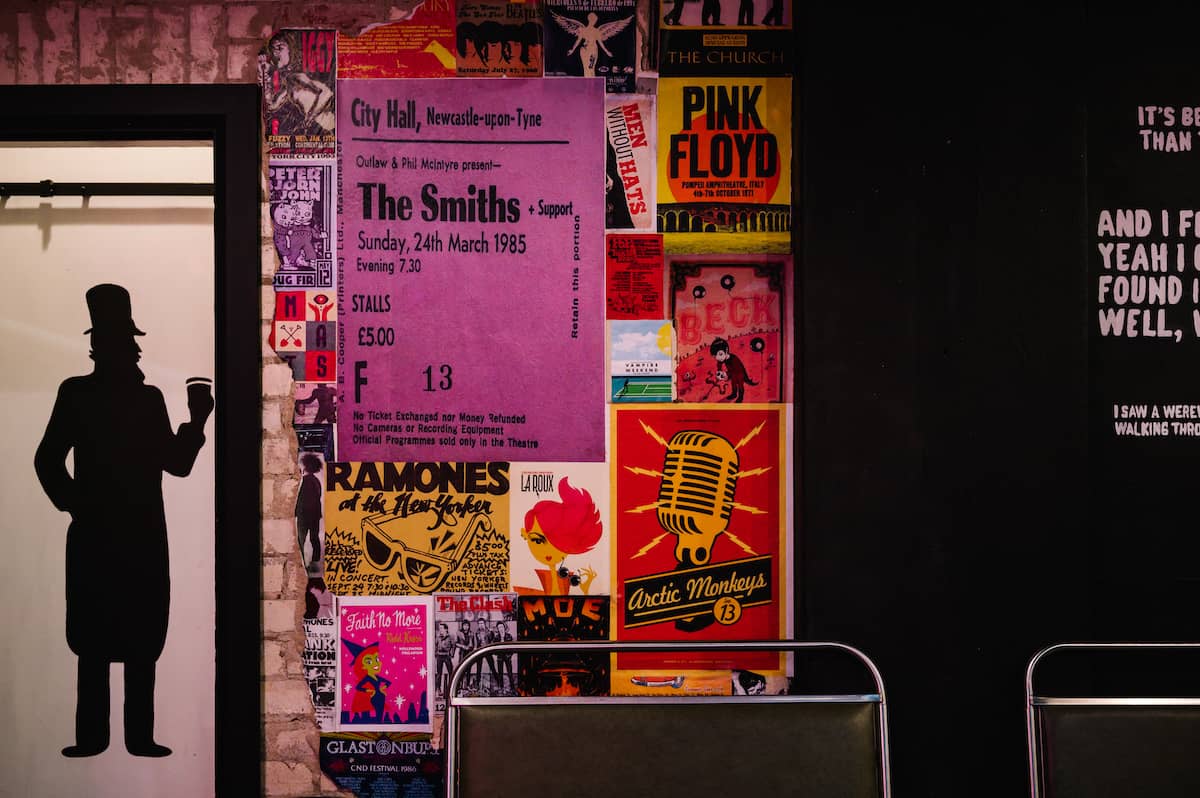 “I grabbed a mate, and we filled three and a half one-tonne skips; it was insane. The owner reckons that the back of the building wasn’t used commercially since the 50s. We found all of these quirky paintings which were really interesting.”

“There’s a lot of crazy stories that came out of this build. We could literally be here for hours. One of them was the guy who delivered our bright tanks said he used to live here back in the 70s. He was upstairs living in apartment two. He had so many great stories to share. 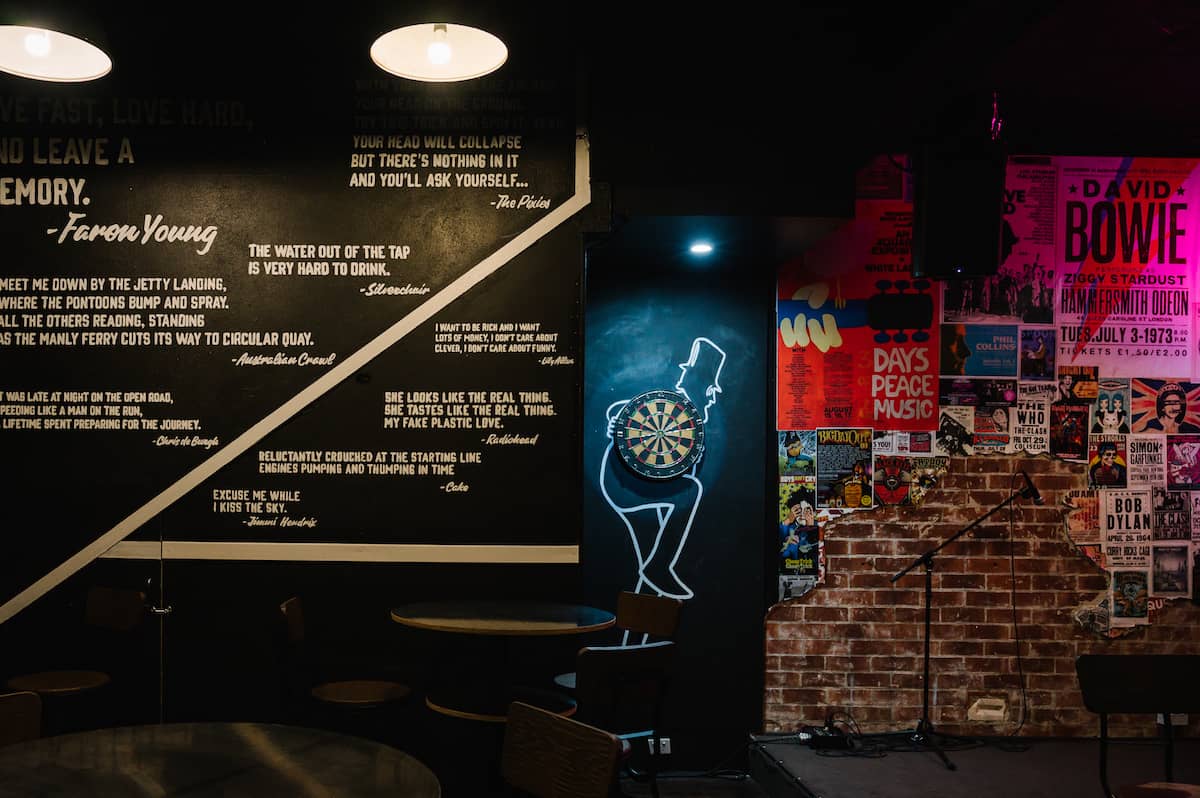 “He was here with the Star Hotel riots. He was up on the roof throwing cans at police. He had a unique story because he hadn’t been back in Newcastle since then. His first job as a truck driver to deliver here in Newcastle was to deliver the kegs here, at the house he used to live at,” Craig shared.

Finally set to open in late September, the venue has been packed as COVID restrictions would allow. With people being turned away time and time again.

“For those first three weekends, we had six dates for friends and family to come in and check it out so we could iron out a few bumps along the way. We basically did a lot of private functions for the first three weeks and two weeks ago we opened to the public. It’s just been awesome, and we’ve been full every night,” Adam said.

With live music from a good mix of local musos in the back room every Friday and Saturday nights, and all-day Sundays. Plus, an open mic on Thursday evenings and plenty of quirky events happening every week; there’s plenty to keep you entertained at The Rogue Scholar.

“We did bingo for the first time last week and it was pretty cool. We had average prizes which was part of the fun of it. I really wanted ordinary prizes. The good stuff was obviously beer and things like that. We also had coffee beans and honey from Besties. The average prize, which ended up being the grand prize, was a chandelier that hung in here.” 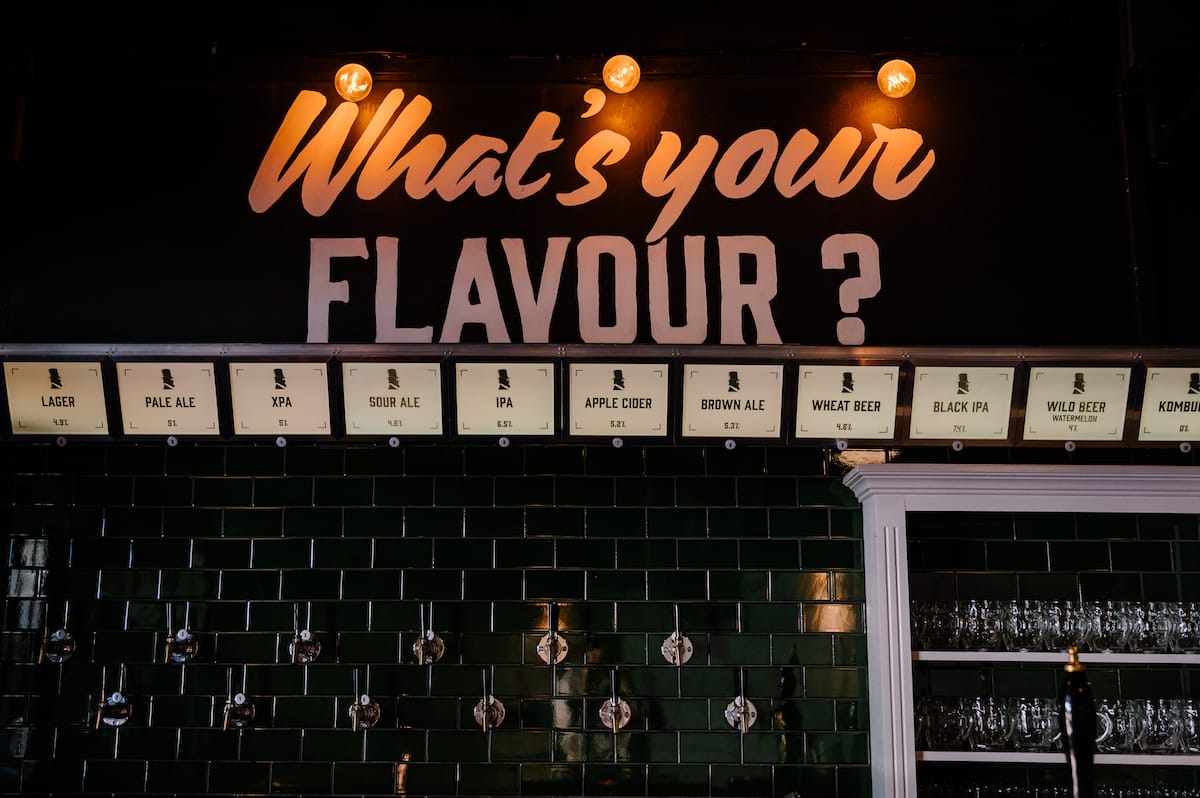 If you’ve yet to sample the goods from Rogue Scholar Brewing yet, don’t dismay, with a constant rotating range of brews on the taps, every visit will keep you on your toes with plenty of flavours to sample.

“Last week I did 33 different styles in option to come on the taps here. That’s What’s Your Flavour motto is all about. It works from light to dark and we’ll always be incorporating as many different options.” 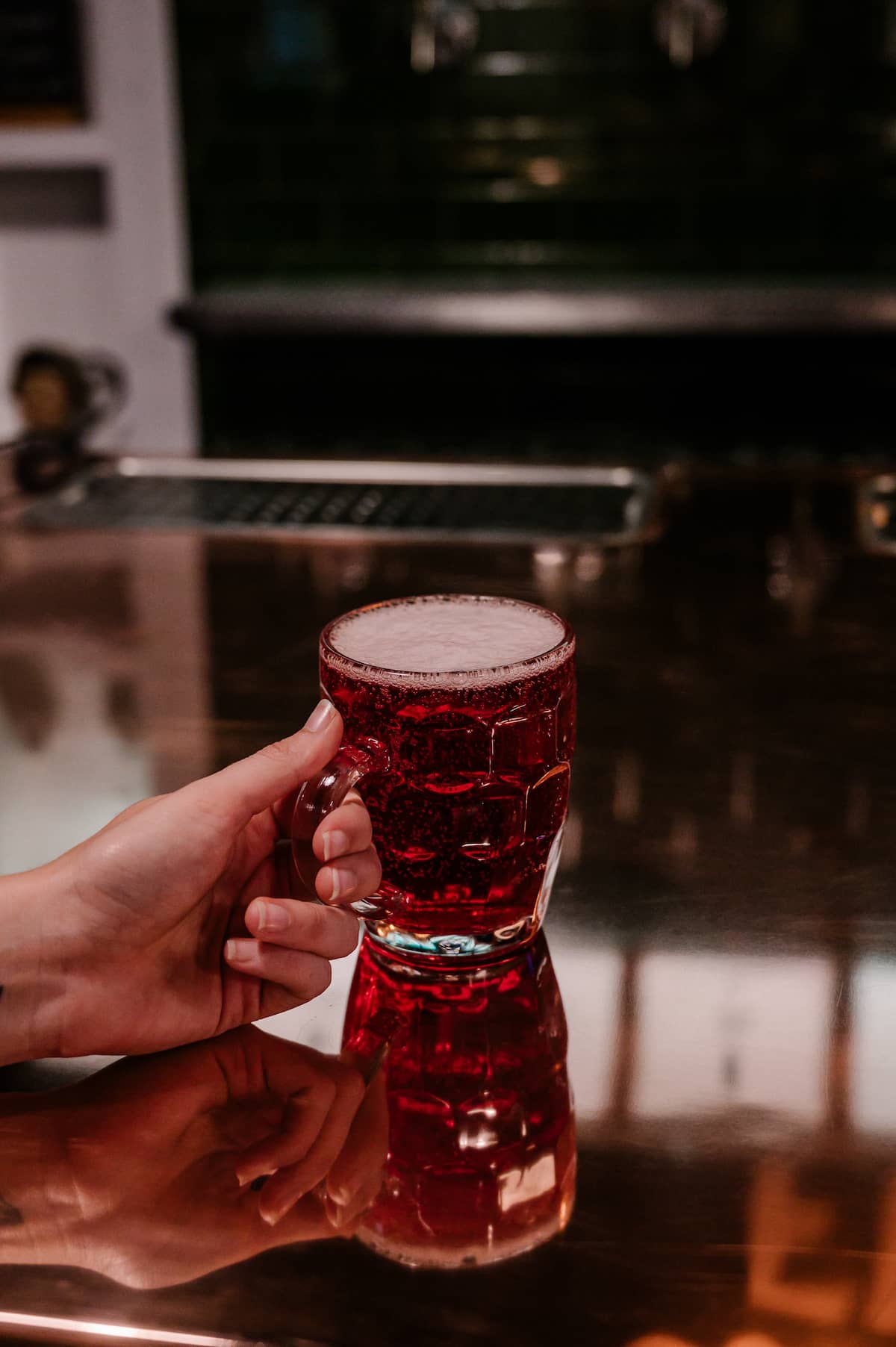 Now, what kind of food do you expect to see from a beer-based venue? Good hearty meals? Well, no surprise the team doesn’t disappoint in this realm. With an offering of gourmet pies and sausage rolls for the moment, the team plan to work alongside their caterer, Josh Seaward of Forty Feathers to build on an English Pub Menu. With plans to even see Sunday Roasts making an appearance; Yorkshire pudding and all!

“We’ll never be a big food venue, and I’m happy to have food available all the time and this menu will go all night.”

The dimly lit venue is sectioned into two separate areas, the front bar and back gig room. Walk straight into the front bar where you can pull up a chair at the copper-topped bar or choose from one of the refurbed old bus chairs underneath the exposed brick wall and floating rug. Head out the back to the booming live music space and take in the old gig posters and quotes from some of the best bands across the globe. 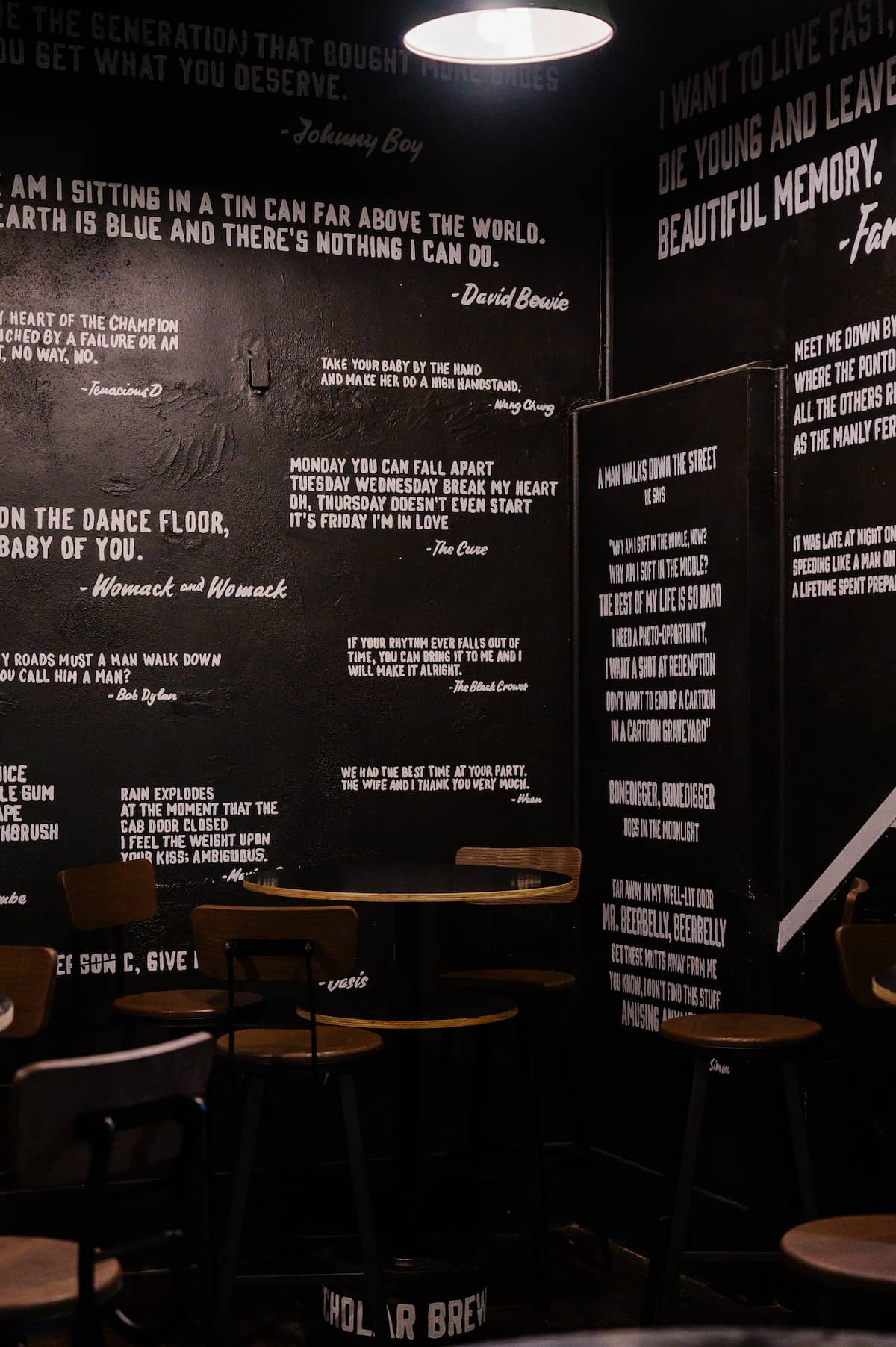 For the non-beer lovers, don’t be discouraged, The Rogue Scholar have thought of you all with wines from Tamburlaine and plenty of spirit and cocktails options! 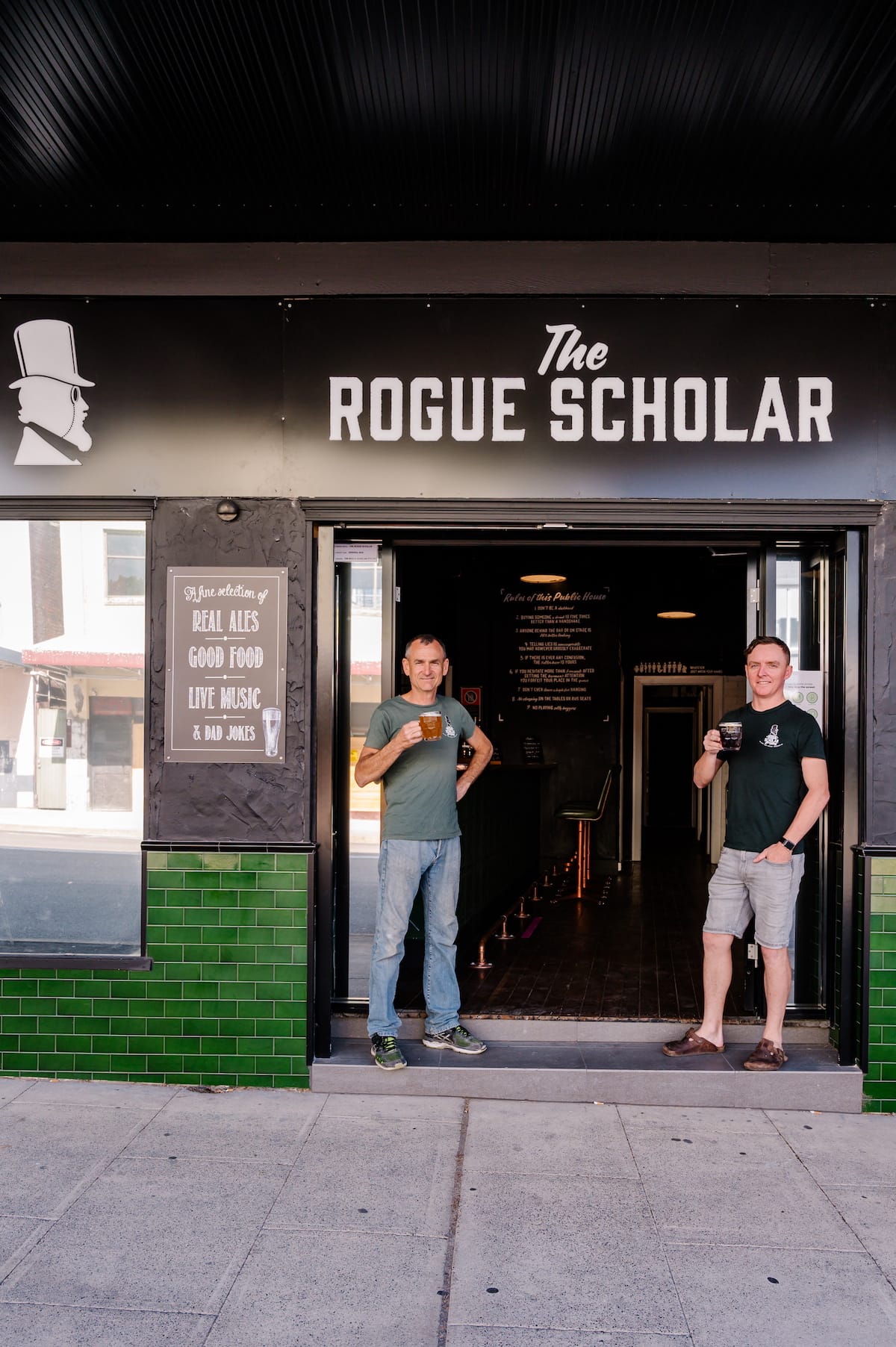 So, what are you waiting for? Get on into Newcastle West’s newest venue, The Rogue Scholar!

The holey grail of baked bagels on Newcastle's Hunter St