We chatted to architect Ben Berwick about one of Newcastle's most exciting openings of the year and how it all came about.

Newcastle has been asking for it, demanding it maybe a better word, and thanks to a collaborative effort Susuru opened its doors in November 2017. There is, however much more to this Ramen and Gyoza restaurant than delicious authentic Ramen flavours.

We caught up with architect Ben Berwick, one of the major driving forces behind the making of Susuru.

Are you originally from Newcastle?
I was born in Newcastle – moved to Sydney at 17 to study architecture there. 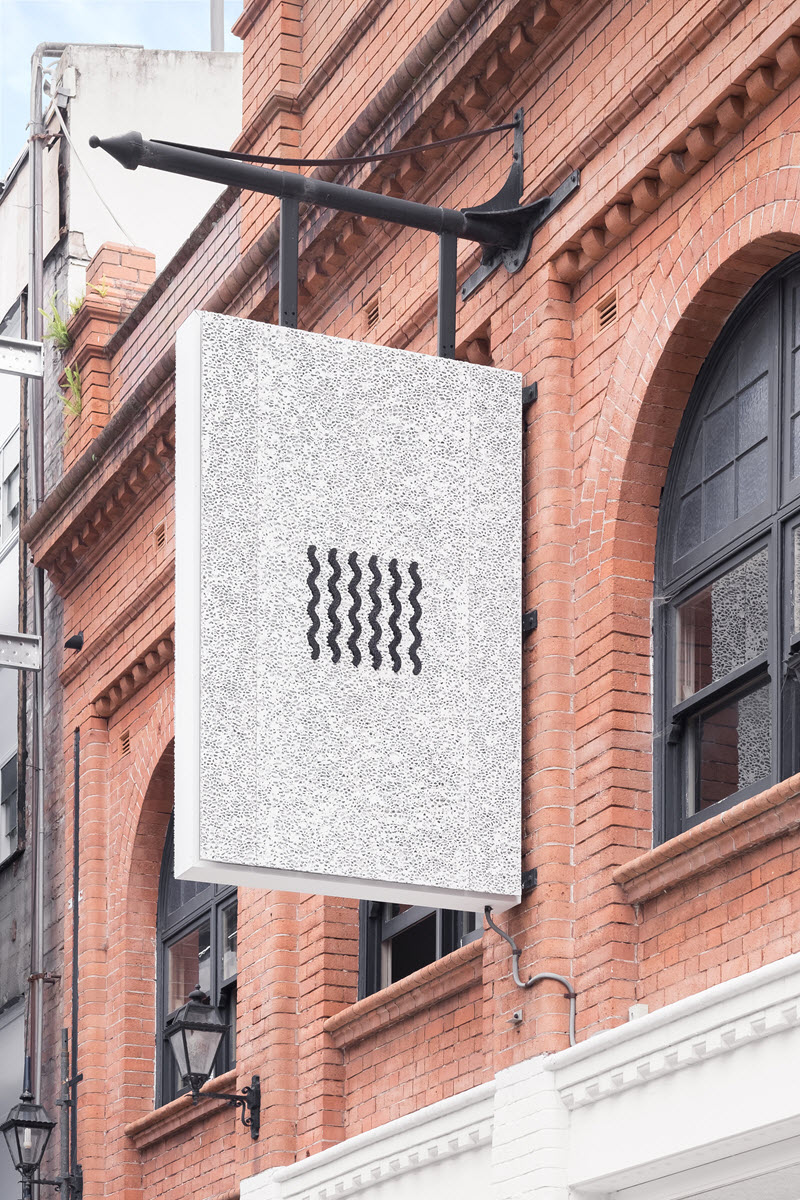 Can you tell us about some other projects that you’ve worked on previously?
I was involved in the design and documentation for the renovations at the Sydney Opera House many years ago whilst working for a company there, along with many works in Sydney and Canberra. In Tokyo I worked for Sou Fujimoto, being part of a team to redesign the new centre of Shanghai – centred around a new museum of the area. More recently I moved to Paris, to open the international office for Fujimoto, after winning a competition as part of a team to ‘Reinvent Paris’, with the Mille Arbres proposal.

Other recent projects include the curation and design of an exhibition on Japanese Architecture, at the Centre Pompidou Metz, masterplan for the old city of Sete, and experimental mixed use timber buildings in Amsterdam.

How did you come to be involved in the Susuru project?
I’ve known Taiyo for 7 years – we first met working in an architecture office in Sydney. Due to visa restrictions in Paris, I had planned to move back to Tokyo, however, Taiyo proposed the Susuru project, so I decided to come back and see what I could offer back to my beautiful hometown. 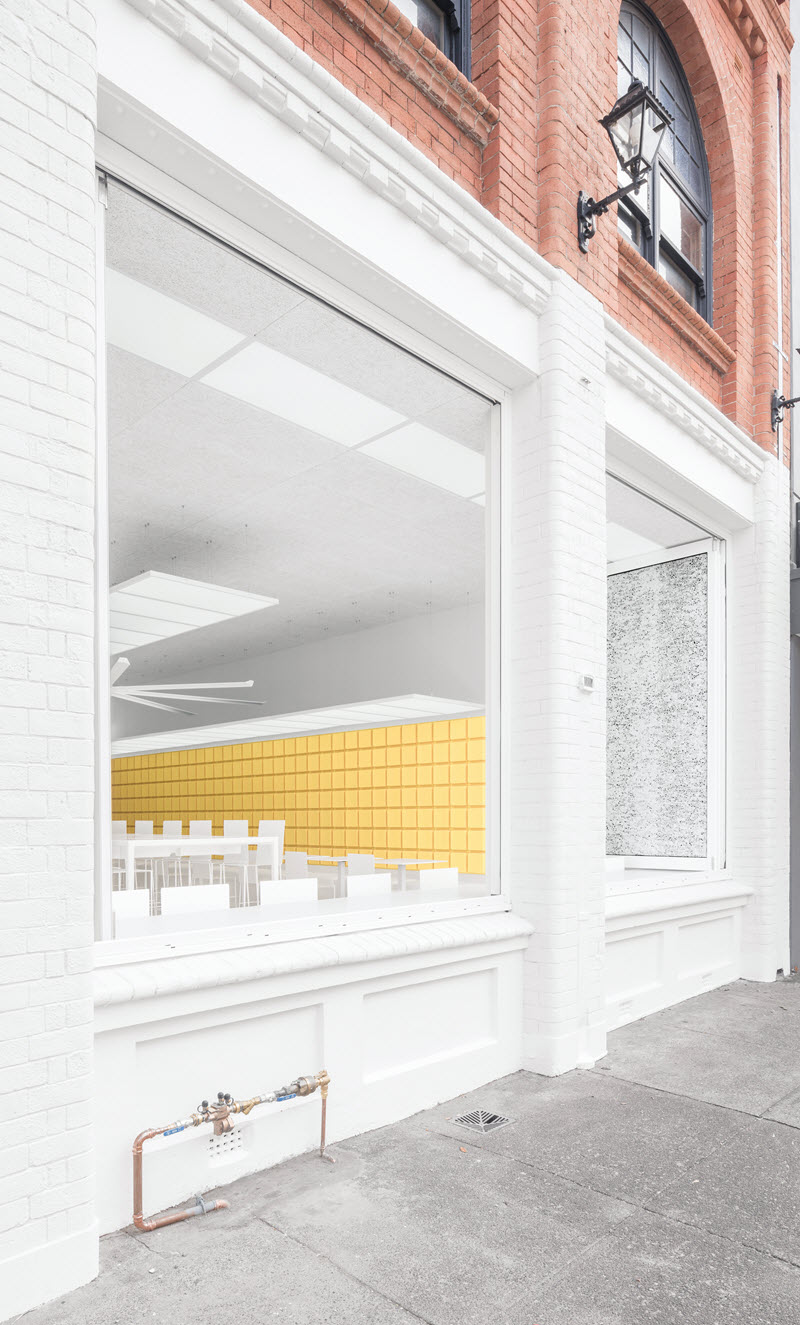 Were you given a brief to work from?
In a way, yes. Taiyo came to me and wanted to open a ramen restaurant, that later could be replicated in Sydney, Melbourne, etc. For this, we needed a strong brand, a strong space.

It’s quite rare that a restaurant or business is started in Newcastle, and makes its way to the major cities. We knew this, so we also knew we needed to do something different, something striking, and something that those in the major cities would want. To lust after something food and culture based, from Newcastle, was the idea.

The Japanese graphics are very cool, is there a story behind this?
The graphics are in a way, seasonal. They are to enliven the space beyond its white and yellow palette.

The chef originally came to me wanting a Tokyo Metro-themed space. Short of assembling a carriage in the space, I borrowed elements from station and carriage design in Tokyo – the uniform light panels, white, easy clean, hard surfaces, yellow highlight colour to indicate which line you are on, and the creation of movement with the fan in the space. 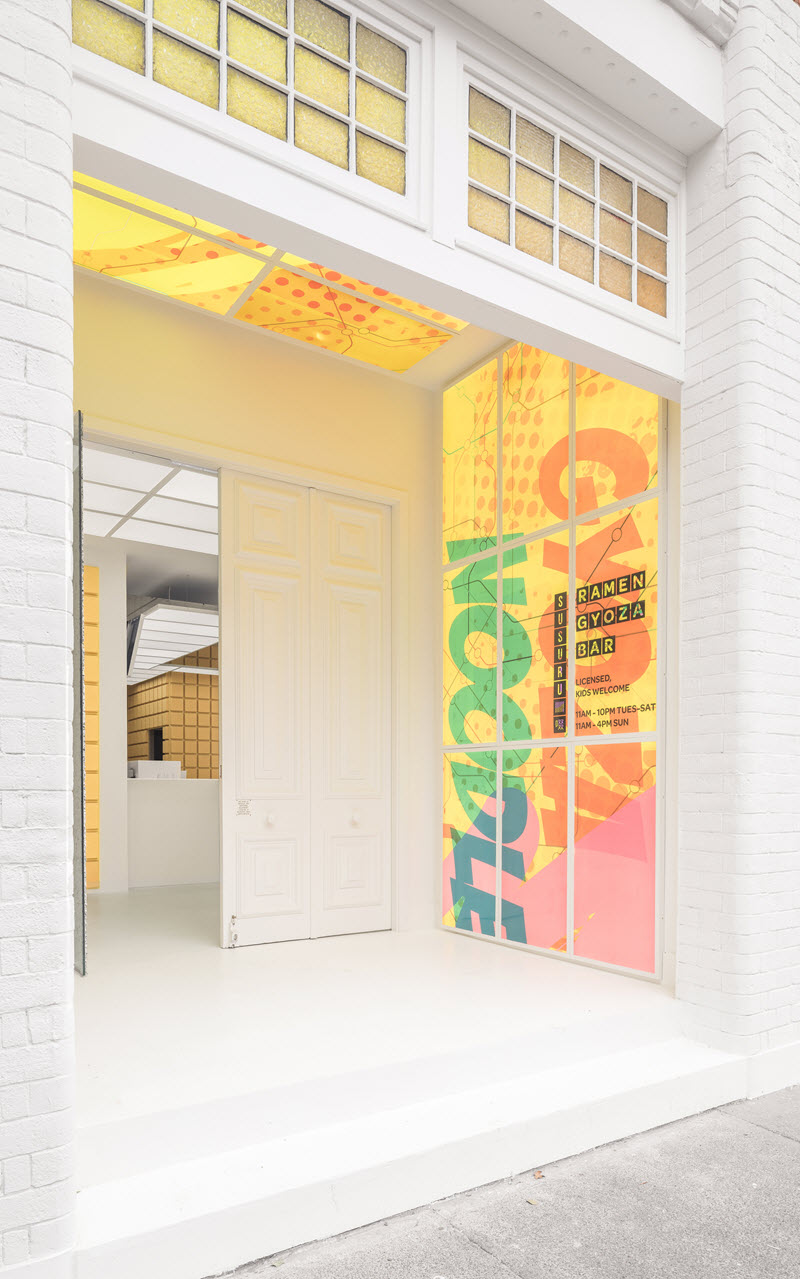 How long did Susuru take to come together?
For me, it was rather quick. From landing in Newcastle to opening day, was just over 6 months. The city worked well, and, hard with us to push through the necessary paperwork, documentation and regulation to get the place open in that time.

For Taiyo, it took years. Research, opening an offsite kitchen to prep the food stocks, finding a building, and organising a digital ordering system [yet to be implemented] from Tokyo took a lot of time on his part. 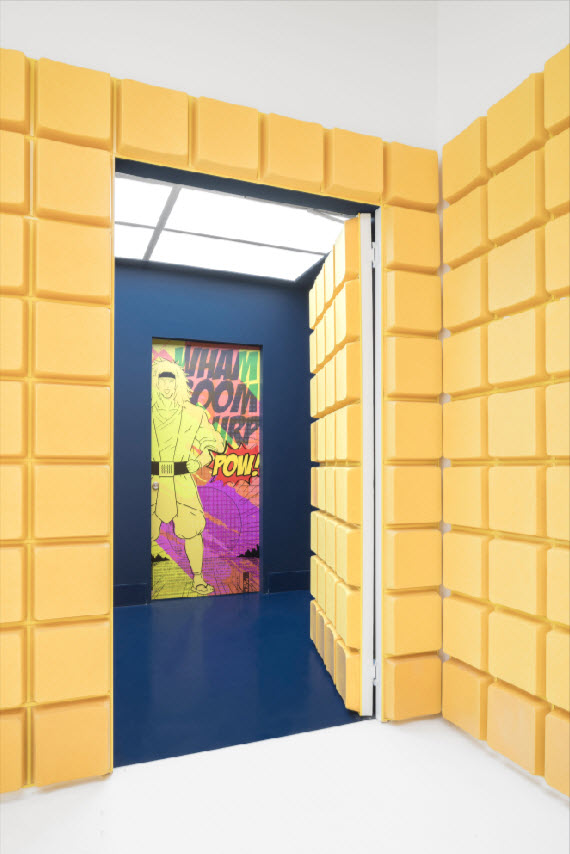 There’s nothing else quite like it in Newcastle, what did you enjoy most about the project?
A few moments of the project really stand out to me.

Throughout the first month of construction we received many complaints. I am not sure the tally of letters the city received opposing our renovation. If it's anything like the number of people that came in to see me to complain in person, then it’d be a large number. I’ve worked in many cities and completed work more extreme in nature than this. I really didn't expect to be getting this amount of negative push back from my hometown. It was tough, and being on site everyday, I had to deal with it. What can I say, Newcastle liked the building as it was.

When the work became more complete, almost overnight, the perception of the project turned positive. I was standing out the front of the building at 9:30pm on a Sunday with the head builder, Pete. We had the windows open, and a few people started to come around and ask about the project. And congratulate, and take photos. The builder motioned for me to turn around, there were not only 20 people in front of the building, but another 20 across the road taking photos. Everyone was smiling ear to ear. That was a feeling I’ll always remember.

Since that point, some of the people that previously complained came to me to understand the project more, and they seem to have come around. They recognise that Newcastle needed this something new to open up opportunities for others here to express their own style, and not just replicate an industrial or mining aesthetic common to the areas ancestors, but not younger generations, or what Newcastle is today. 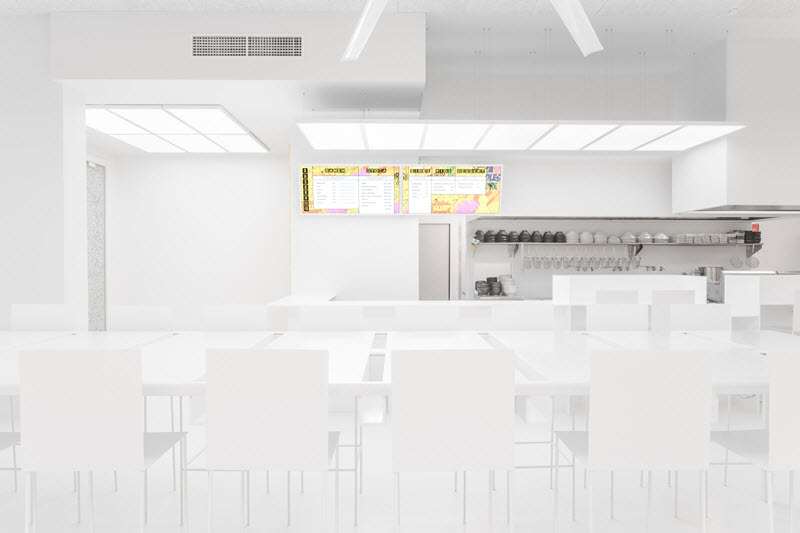 Working with the builders and tradespeople every day onsite was great. Its not something an architect will normally do, however information and skills were traded on both sides.

Many of the products were sourced internationally. There was a time when I was taking calls at 2am everyday for a week from Canada. I spoke to different manufacturers in China everyday for 5 months, tough but rewarding. Especially when they can see their products used in ways they hadn’t seen before. All of the tables and chairs were created locally, it was a really nice collaboration with those manufacturers also, especially when it might be something they don't normally create. We were all learning.

How do you actually say Susuru, I’ve heard a couple of different pronunciations?
How a Japanese person and an Australian say it will always be different haha.
Try, SU-SU-RU, at least in Japanese characters, this is how you would break it down.

What’s up next for you?
A few different things. I’m designing the user interface of the tablet system that will be incorporated into Susuru in the new year - liaising with the programmer in Tokyo to make it happen. Also working on new graphics for Susuru to mix it up next year.

I’ve been asked by Newcastle Port Corporation to work on a prominent site at the entry to the harbour. There’s a presentation this month, more details might be released then.

Last month I won second place in the James Dyson Award for invention and innovation. I’m investigating opportunities to further this research relating to building and energy technology.

Amongst this, I’m working on the design for some private residential clients, and completing not so glamorous legal work surrounding zoning for certain businesses.