For those of you who can remember dining out in Newcastle 30 years or so ago the name AL-OI Thai will bring back fond memories.

It was in 1991 that Peter Maddison launched his first AL-OI Thai Restaurant in one of Darby Streets beautiful terrace buildings, which saw the beginnings of an extraordinarily successful and colourful career in hospitality.

First drawn to Thai cuisine and its culture whilst working at the American Express Head Office in Sydney back in the 1980’s, it was here that Peter managed the accounts of restaurants across Australia, the South Pacific and South East Asia. His fascination for Thai food drew him in so much so that he decided to pick his life up and relocate to the Kingdom of Thailand.

In 1988 Peter first landed in Bangkok and made his way to various provinces to meet the people and begin his steep learning curve. First working with street vendors to grasp the basics of Thai food this also allowed Peter to quickly learn the Thai language. From food vendors to working with a variety of Thai Restaurants, (seafood – northern Thai – Laos ) then onto 3 Five Star kitchens where he worked with the best Thai Chef’s in the nation as Peter explains,

“One Chef, in particular, was a favourite of King Rama 9, whom the King called on at times to prepare his special dishes for him. I have also on a number of occasions been asked to design and cater for members of the Royal Family.”

It was at this time Peter became known as the “white Thai” due to his cooking prowess and ability to speak and understand the Thai Language so fluently.

In 1991 Peter returned to Newcastle and it was then he opened one of Newcastle’s first Thai Restaurants – AL-OI Thai. Crowds continuously lined down Darby Street night after night eager to try the new offering, a second AL-OI Thai Restaurant soon followed opening on Bolton Street, Newcastle.

Following Bolton Street came one of the flagships in the AL-OI Thai dynasty – a magnificently designed and fitted out in the old Siam Sukho Thai style, a 150 seat restaurant was opened in Beaumont Street, Hamilton. Attached to the front of the restaurant was another Newcastle first, and the only Thai Noodle Bar in Australia at the time. Featuring a community dining concept guests were asked to take a seat around a specially designed and hand-crafted Thai wooden table that comfortably seated 30 people.

Never compromising on quality or service the success of Peter’s restaurants saw him agreeing to franchise the AL-OI business model and soon to follow was an AL-OI Thai Restaurant in Nelson Bay and at Terrigal on the Central Coast. Then Peter was invited to fuel the minds of our brightest, by the University Of Newcastle. Soon to follow was the opening of Al-Oi Thai on the Newcastle University Campus.

One of the secrets to Peter’s business success was his obsession with staying at the forefront of Thai cuisine which saw him take regular visits to Thailand to stay across all the newest dishes and flavours, along the way continuing to work with the country's best Thai Chefs.

The accolades and awards rolled in and with the business at its peak, in 2003 Peter was made an offer to sell the AL-OI Thai Restaurants, which he accepted and then returned to Thailand where he opened the Office Bar and Grill (which was the largest and most popular expat Bar and Grill in Bangkok.) One year after opening, Peter formed a syndicate that purchased one of the largest Thai Private Clubs in Bangkok – called The Violin which consisted of a premise that had 19 Karaoke Rooms, and one of the finest Thai dining venues in Bangkok.

All contained in one of Bangkoks landmark premises which was previously the private home of the former Thai Prime Minister.

During this time in Thailand Peter continued to immerse himself into Thai Food & indeed Thailand. He travelled throughout the entire country visiting every one of the 76 (Now reclassified to 77) provinces. Meeting the people and trying the different styles of cuisine. He not only visited the major cities, he also spent time in the smaller villages to see how Thai people really lived and ate.

Peter explains how wonderful this period of his life was, and indeed what a huge learning curve it was again. He reflects with great joy what an impact this period had on his food journey.

“It made me realise the true depth of the Thai food scene & culture”. There was no boundaries. People in the villages could create amazing tasting dishes from whatever was available at any particular time.

Peter goes on to explain that even to this day his learning curve continues & that in his opinion the category of Thai Food has no boundaries.

In 2009 Peter and Nok decided it was time to return home with their growing family and sold up their businesses, however, the food bug wouldn’t go away.

After months of deliberation Tarlart Thai (which translates to Thai Food Market) began operating from the Newcastle Farmers Markets in 2011. Tarlart Thai was the result of Peter and Nok’s many hundreds of hours of work, investment, creativity, and determination to find a way to produce restaurant quality Thai meals into "Take Home Packs" that could be enjoyed and shared with friends and family at anytime.

Whilst business was travelling along smoothly, life has a way of throwing up unexpected challenges and the Maddison family is no stranger to this with Peter explaining,

“We’ve certainly suffered more than our fair share of setbacks and heartaches. Like everyone in business and indeed life certain things come up which alter your trajectory or plans for one of a better word.”

In 2015 Peter and the family returned to Thailand where they began living and operating a beautiful riverside resort and pub/restaurant in Chiang Mai. Once again, the decision to return home in 2019 was based around the needs of their young family with Peter saying,

“We are very lucky to have three very understanding and beautiful children Pemi, Jenni & AJ in our lives who are our inspiration, behind everything we do. Our story would not be possible without the love, devotion, and sacrifice our children have given to the family business whether it be getting up at 4 am to get to the markets or the endless hours of standing stirring large batches of curries and sauces, or just picking all the leaves off countless bunches of coriander and mint. To being sales staff in their very young years to our youngest son sleeping under the back table at markets, many years ago.”

It wasn’t long after returning to Newcastle that the requests started flowing in from past customers and friends who missed Peter and Nok’s handcrafted Thai cuisine. 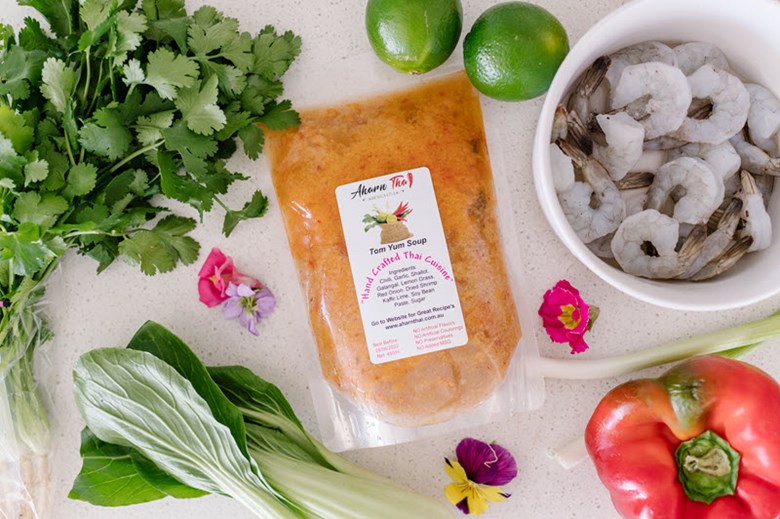 This brings us to where we are today and the launch of Aharn Thai (which translates to "Thai Food"). Rather than opening a restaurant space, Peter and Nok wanted to take the restaurant to the people and began producing their Aharn Thai products and selling through the Newcastle Farmers Markets and this new medium (for us Peter laughs) of selling online and via social media channels.

It’s been quite the journey and what Aharn Thai represents today is the culmination of a lifetime in the Thai Food industry for Peter and Nok.

"We want to give everyone the chance to indulge in this beautiful cuisine, but in a way that allows them to experience the aroma, and the "True Thai" taste, but also be involved in the process, by leaving it up to you as to what protein, seafood or vegetables you want to enjoy with their Thai food experience, not what a restaurant is telling you to serve it with."

After spending half his life in Thailand, and the other half here in his home town of Newcastle. Peter is extremely excited to be back home and to have the opportunity to offer his handcrafted Thai cuisine to the people of Australia.

Each Sunday you can find Peter and Nok at the Newcastle Farmers Markets selling their extensive range of hand-crafted Thai entree's, sauces, soups & curries. As sure as the sun is shining, Peter is always up for a chat about all things Thai food and times gone by and is more than happy to share all his cooking secrets to guarantee the best Thai at-home experience possible.

Ready to picnic? We’ve got you sorted!

Hand crafted Thai cuisine any night of the week