The Falcon owners Brendhan and Mike on the dream for the venue and the heritage of the menu.

In a lot of ways, The Falcon is just the neighbourhood bar. But for many, it’s also the veranda, the kitchen table, and the living room.

Such was the dream of Manager Mike and Chef Brendhan when they opened doors last year. Not a barbecue joint, not an American restaurant, just a place for people to eat, meet and feel like they’ve arrived. 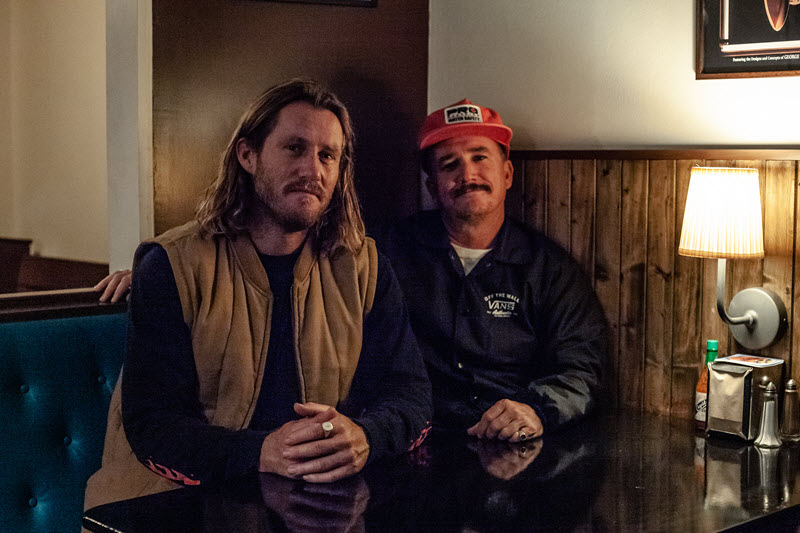 Like his home state of Florida, Brendhan takes bits and pieces of his cooking from all over the South. It’s a modest alchemy, turning tough cuts into smoke-sweetened, gelatinous chunks with hours of slow-burning wood. Or pan-flicking rice, beans and sausage into a jambalaya rich with smoke and spice. It’s nothing fancy. It’s just honest cooking that takes love and time.

I caught up with Mike and Brendhan to talk Southern food, DIY bar building and the importance of community:

Where did it start for you guys?

B: Mike was managing a place called Stuffed Beaver on Bondi Road. I just left them a note one night saying ‘hey, I got a background in barbecue, I’m American, I’m looking for work.’ They called me the next week. Mike and I became friends over that time.

What was your background in barbecue?

B: Just being American. When we were kids going out for barbecue was like going to a waterpark.

I started getting into it again when a friend of mine moved to Memphis in Tennessee, and he started taking me to all the barbecue restaurants in Memphis. That’s what really got me into cooking again. I wanted to recreate those flavours from when I was in Memphis. 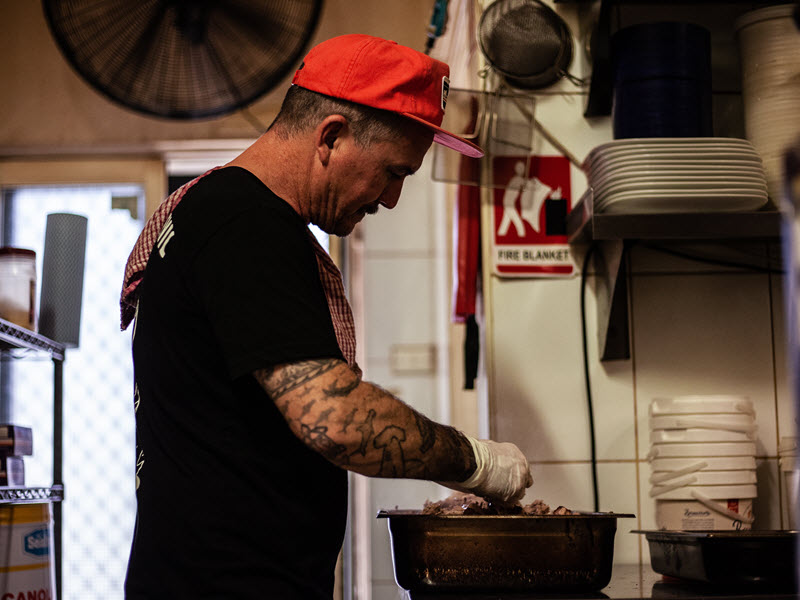 B: This place called Rendevous. It was all pork ribs. When I got home my girlfriend bought me a little smoker for the back yard. And I would go to the butcher and get ribs, make a batch of sauce.

Absolute garbage. I’d throw everything away. This was before YouTube. I’d go into book stores and read all the barbecue books I could and make notes. Back when you could sit in bookstores all day and not buy anything. I just got better and better over time.

Eventually the Beaver owner offered Mike and I to open up a barbecue restaurant in Darlinghurst.

M: That place was done a bit more by designers. This is quite DIY. This is a bit more of our passion. 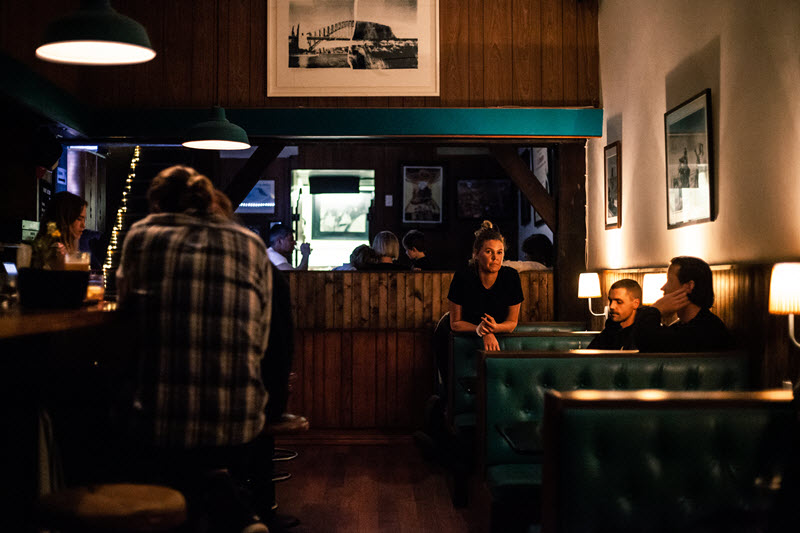 What was that passion? What was the dream for The Falcon?

M: I think we just wanted something that was authentic. Something that reflected our common interests, our heritage, whether that be music, skateboarding, surfing, beer, whatever it may be. We just wanted to say ‘everyone come and have a good time, you just have to enjoy the vibe for what it is.’

B: We wanted to make it to be like it if you came to our house. We decorate it pretty similarly. The vibe that people like in here, I think it just came naturally. There’s just no pressure.

That’s why we steered away from calling it a barbecue restaurant. It’s the real deal, but we didn’t want to get pigeonholed. 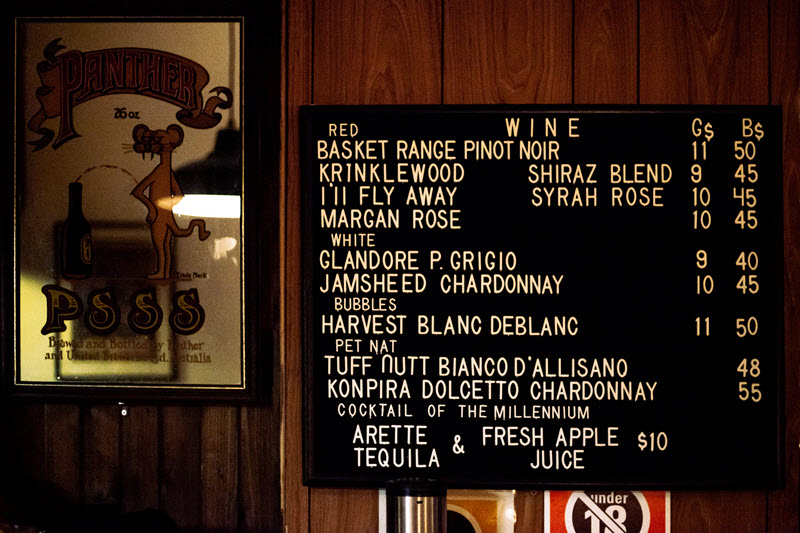 B: It's a heritage thing back in the States. It’s as old as the US is. I hate to use comfort food but that's kind of what it is. Warm, hearty, nothing fancy. There’s no tweezers.

It's very regional. In the Carolinas they’re known for pulled pork. Texas is known for brisket and sausage. Kansas City is big on ribs and chicken, and Tennessee does ribs too.

Here the crabcakes are a Savanna style. Obviously the jambalaya comes from New Orleans. 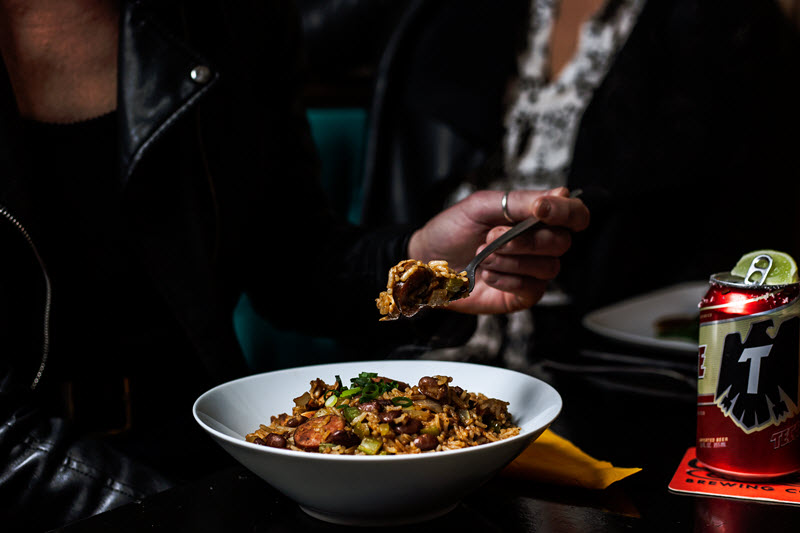 Why are things like the pork and brisket traditionally smoked?

It’s all about the aromas and smell that gets into the meat.

We use applewood, from up in Queensland. It’s got a sweeter flavour. It doesn’t impose too much on the meat, it’s a bit lighter. Whereas in Texas, they use a lot of mesquite which is really powerful.

We just have a supplier in Queensland there who cuts wood specifically for barbecues. We go get it.

You drive to go and get it?

Yeah, we did last time. 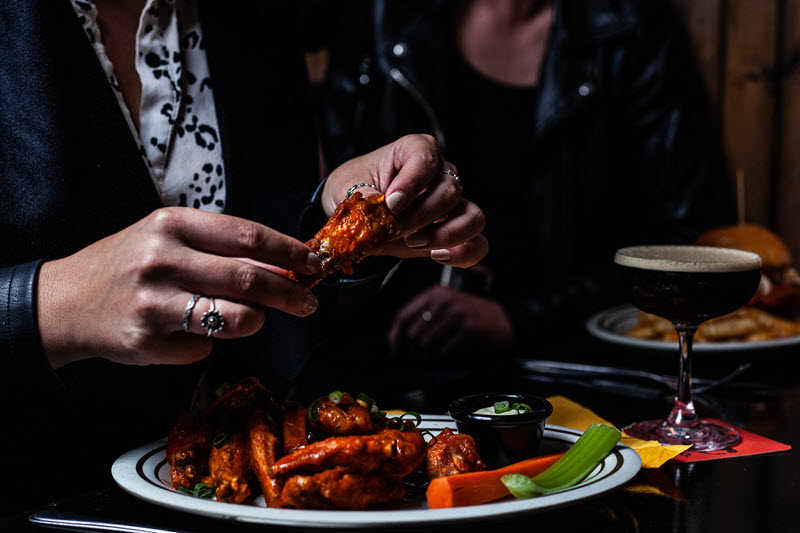 How long did that take?

Two days. We buy by the half tonne so it’ll last around a half year.

How long do you smoke the meat for?

B: The brisket takes 16 hours. It’s the toughest muscle in the steer, it’s the big chest muscle. To cook it properly you have to cook it very slowly to that all the fat breaks down and it just turns into this meat jelly. Same with pork shoulder.

He offers to show me.

In the kitchen Brendhan pulls out three pork shoulder and two brisket from the smoker. It smells sweet, a kind of light, bright smokiness. 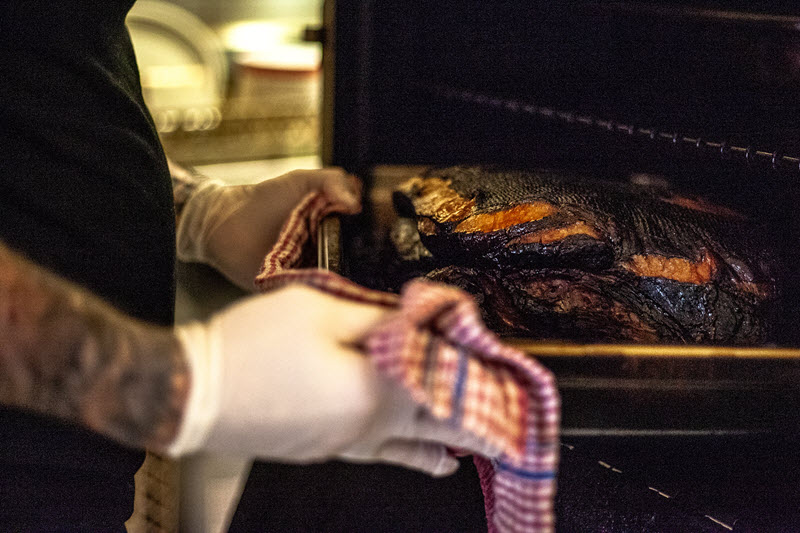 ‘We smoke when we need to. We do chicken, sausage, the pulled pork and brisket in there. We also take the dripping from the beef and reduce it to make sauce for the French Dip.’

Later he breaks down the pork by hand and unwraps the brisket. Coarse and blackened, they look like trees after a fire.’The surface is called the bark.’ He handles it and it wobbles. Meat jelly, as promised. 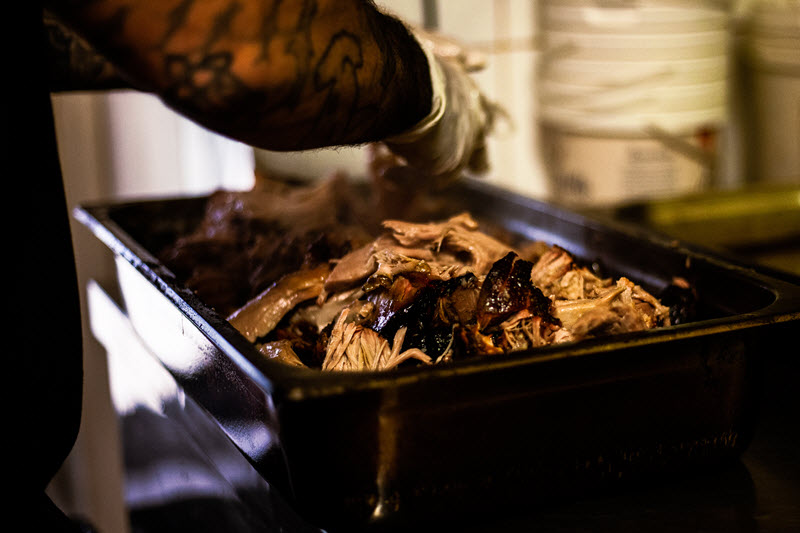 How did you end up in Newcastle from Darlinghurst?

M: I loved Newcastle, I lived here for years and years.

Brendhan had moved up here. Took a Head Chef position at the Prince of Wales Hotel. But we found a spot and we were like, this is an opportunity for us to get a foot in the door and I think that wouldn’t have been able to be achieved in Sydney. This location’s killer. 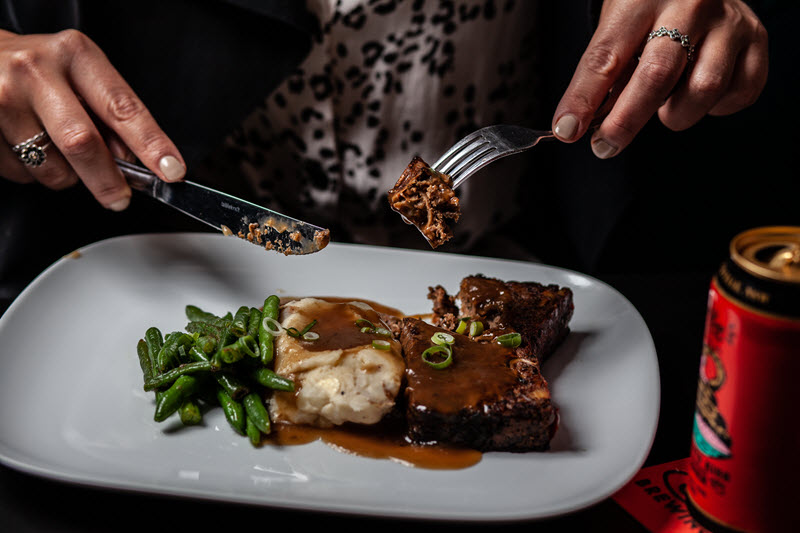 M: I think bringing it out to the people and putting it on the street is ideal. The building’s got old bones so it feels old. We don’t want any of that new shit.

We had to do some wheeling and dealing to get in here. I had to work three jobs, then Brendhan quit so we could get this thing going. It was very stressful. We had no money. So we had to go and talk to some friends.

I’ll never forget paying everyone’s wages for the first time thinking ‘Damn, people have actually given us money for this.’ 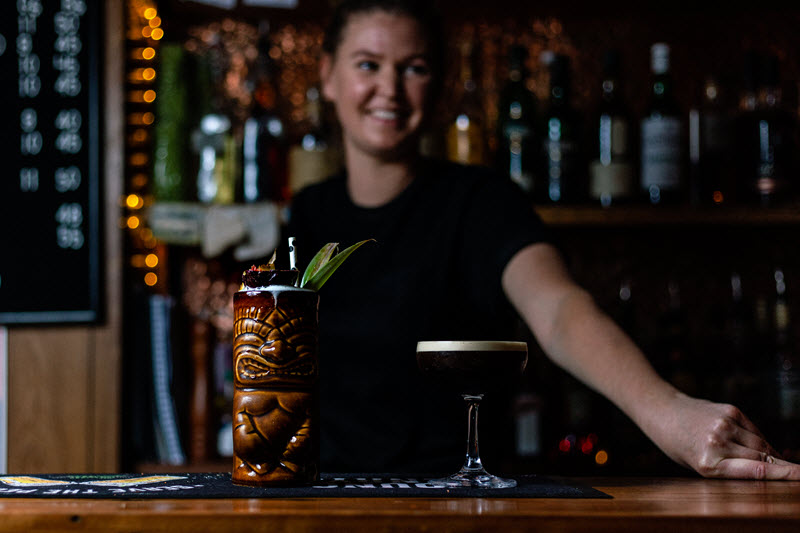 Did you have to do much to the place?

B: It was a big job. We re-painted everything.

M: We did a lot of it. My friends made all the bar out of wood from an orphanage from 1846 down Sydney way. We put in all that wooden cladding too.

How did you collect all of the artwork on the walls?

M: I raided my Dad’s old slides. Above the door in the middle is one of an old Falcon and my godfather pointing a shotgun at the camera. It’s from the 60s. All this other stuff is from America. We just put it all together. Just like you would in your house I guess.

B: Talking about it I’m really realising how much comes from Mike and I’s relationships. Because he worked for Young Henry’s, he’s friends with all the Grifter guys. And then my guys from Florida ended up sending stuff over from Tampa Skate Park. Some of the art and posters you see over the bar are from a local artist, Marcus Dixon. We just pulled on every string we had. Everyone’s been so supportive. 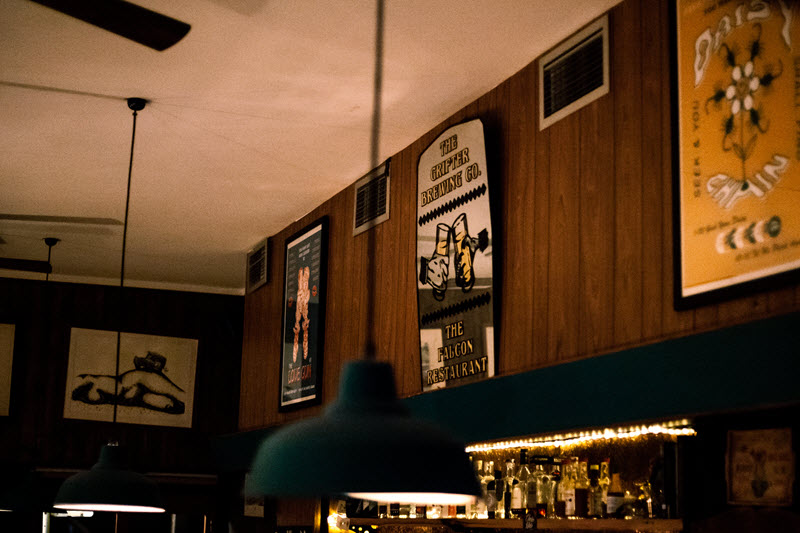 With the beach right there, do you get a lot of the surf and skate crowd?

M: Yeah, we get the local crew. With a venue like this I think its important to support locals and we live in the community. People know Brendhan, people know me, I surf nearly every day, Brendhan walks his dog every day. People see that. They come in and try it. Overwhelmingly they’ve been very positive about it and its been so humbling.

It's a bit of a show. If you come in on a Friday or Saturday night you’ll come and see the team hustling but then you’ll see people on the other side of the bar being turkeys and people having a good time. That’s what it’s all about. It’s always good vibes. It’s about love in this industry, not about chasing dollars.

B: Mike and I both knew that coming in and doing this that it wasn’t going to make us a million bucks. It’s not that Mike and I want to own a yacht or drive a BMW –

M: I wanna drive a Falcon.

B: – we do it because that’s what we’re passionate about. Other people that aren’t from around here come and and they see people saying ‘hi’ to everybody and it makes them feel like they’re in the neighbourhood bar. That’s where people want to be. 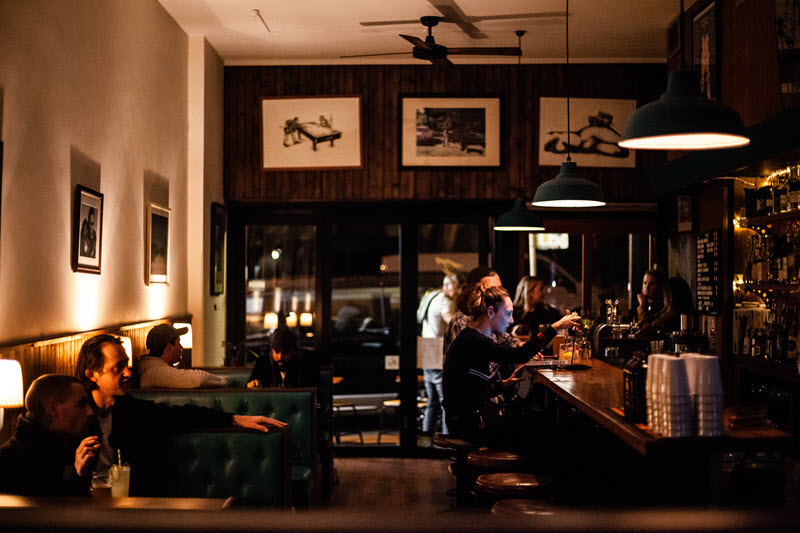