This year there were 800 exhibitors from all over the world, I was also judging at the awards, and the coffee that was on show was just amazing. So it means a lot to us to be recognized amongst some of the best.

It’s no secret that Newcastle has awesome coffee, to us locals anyway, and slowly but surely the outside world is catching on.

Why so slow on the uptake? A combination of perhaps not wanting to blow our own trumpets or make big brash claims to get heads turning. Which is why it was extra nice to discover a local roaster putting themselves out there, not so much for award sake, but more so to test themselves against the cream of the coffee crowd and more importantly, help them to make better coffee.

That was Adam Hills and Trent Alder of Darks Coffee Roasters approach to this years Australian International Coffee Awards (AICA), yep the coffee container at Hunter Stadium, and it brought them a bucket load of medals, in all three shades, and most impressively a Trophy for 'Best in Show' in the Filter coffee category.

Since 2015 Trent and Adam have been working away at Darks Coffee Roasters, growing the business year on year, and now with a long list of wholesale customers, a loyal gang of customers, one very convenient cafe and a bunch of awards on the shelf, the Darks lads are kicking some serious goals, in the nicest possible way. 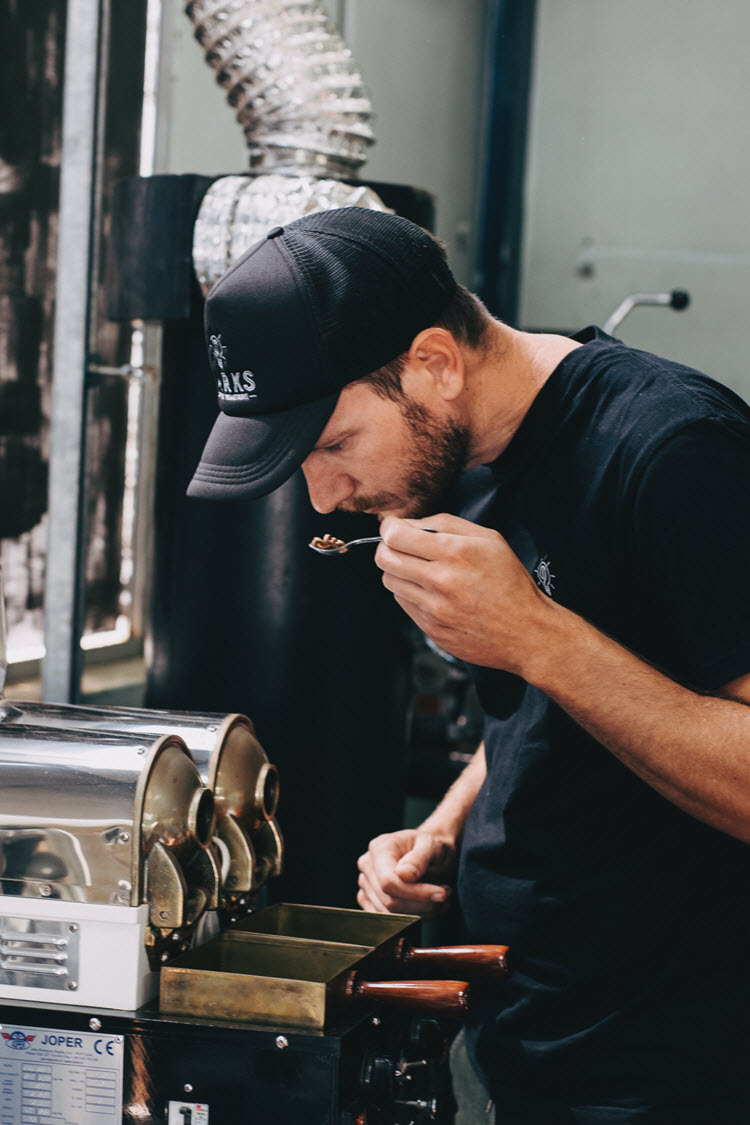 Meeting up with Adam in the Darks roasting shed, Adam’s passion for the bean is instantly apparent, and we very quickly we get the impression that Adam could talk about, and drink, coffee all day.

Interested to know all about the awards and get a taste of some Trophy winning filter coffee, we caught up with Adam to find out just what's been going on in the world of Darks Coffee Roasters.

WAS THE AWARD A BIT OF A SURPRISE?

We targeted the gold but we certainly didn't expect a Trophy so it was a really nice surprise. We’re not known for our filter coffees, people don’t usually come to us for that kind of coffee, and we’ve just blitzed it. Perceptions and the Darks name probably has something to do with it, we chose the name because it paid homage to an old ice works that was in Newcastle and the domain was available. However, I think people perceive that we are dark roasters because of that.

I like to go by the saying ‘walk softly and carry a big stick’ in other words, just go forward and be as polite and as pleasant as you possibly can be and let your work do the talking.

Every year since we’ve been in business we have entered coffee into the AICA, all of our coffees have been awarded at some point but we’ve never received gold before and of the 800 entries around 10 golds were awarded this year.

We like to enter into these awards to bench mark ourselves against the best in the industry, we want to make coffee as best as we possibly can, and the awards helps us to do this. I like to see where we sit amongst our competitors and I like to see what’s contemporary amongst the coffee world.

This year there were 800 exhibitors from all over the world and I was also judging at the awards this year and the coffee that was on show was just amazing. So it means a lot to us to be recognised amongst some of the best in Australia and around the globe. 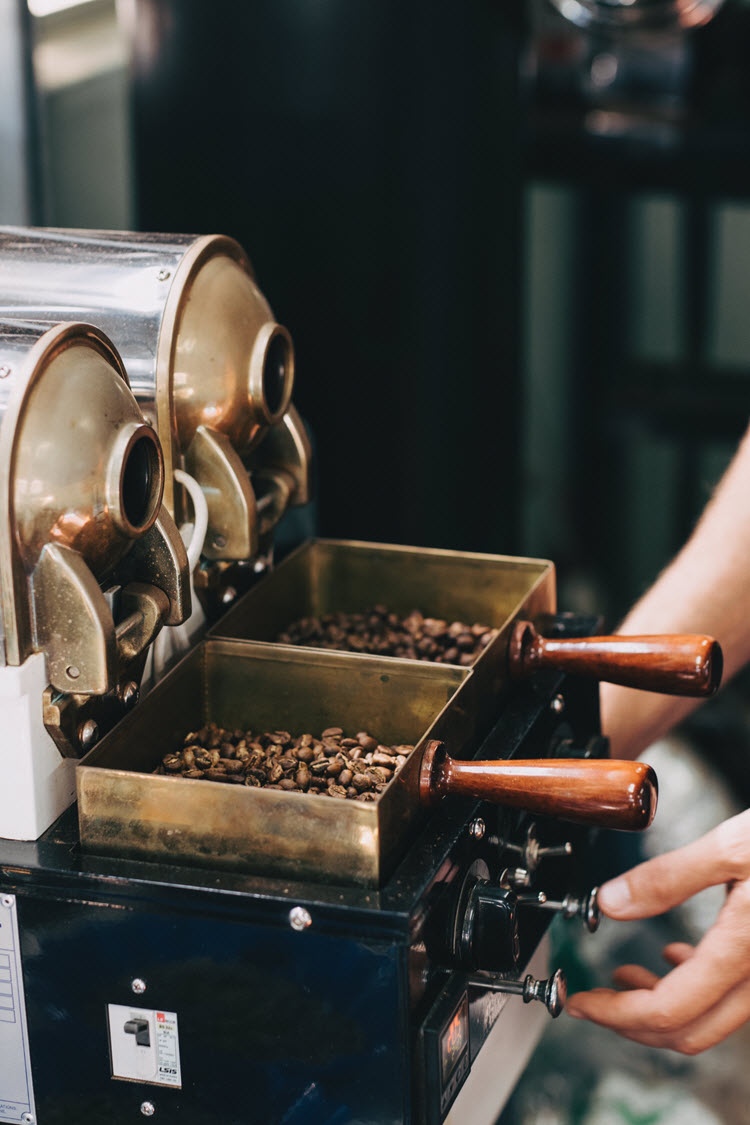 AND WHAT CATEGORY DID YOU BRING HOME THE TROPHY IN?

We submitted our coffees into the Milk Base, Espresso, Cold Brew and Filter categories and we were awarded a gold, silver, and bronze.

For the Filter category, there were only 6 golds awarded and we were one of them which was a little unexpected. Of those 6 golds, they go back in for final judging for ‘Best In Class’, which is a blind tasting, and from this, we were awarded the Trophy, which is quite amazing as to be awarded this the decision amongst the judges needs to be unanimous.

TELL US A LITTLE BIT ABOUT THE COFFEE

We selected the winning coffee through one of our providers, a Sumatran single origin - Bandar Jaya which is a natural Indonesian coffee, a sundried coffee so it’s a bit of an odd one.

I always say this with coffee, particular filter coffee to go on the journey with it as it actually rewards the cooler it gets. So the journey of the cup might be five minutes long where it goes from hot and you’ve got that body and darker flavours, the cooler it gets that’s when the acidity comes out, that front liveliness on your tongue, you get a bit of zestiness. Unlike espresso, which is the opposite, as it cools the flavours don't usually change for the better.

I think some people associate filter coffee with shit American coffee, it’s effectively the same thing, however, we’re taking more care with the flavours but it is the same method as what they use in American diners with the difference being a specialty coffee. 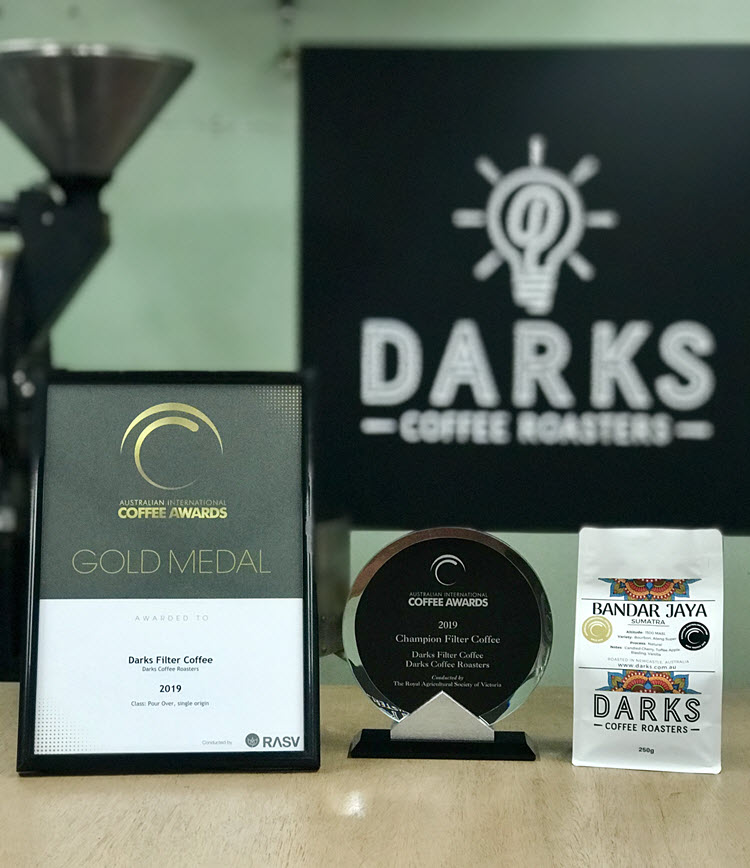 WHAT’S THE FUTURE PLANS FOR DARKS?

Basically, we just want to continue showcasing what we do as Roasters, coffee wholesale is our thing and we would like to expand that and are looking to start supplying outside of Newcastle. It would be great to be able to showcase the Bandar Jaya to a wider audience locally as we’re not known for this style of coffee as much.

We’re working with Bean Hunter, which is a really good opportunity to showcase our product to a really broad audience, so a lot of people right around the country will be receiving the Bandar Jaya with their subscription.

I would also really like to give back to our wholesale customers as well and showcase in their store our Trophy coffee and give their customers a chance to have a taste alongside their normal cup.

If you're keen to explore what a Trophy winning filter coffee tastes like head to the Darks Coffee Roasters website and get filtering!