HUNTERhunter recently discovered the new Ground Up Espresso but really, how could we miss it! The wacky colourful tiles on the outside make this cafe look like a giant game of tetris, it stands out like the proverbial surrounded by the green leafy fig trees of Young Street, Carrington.

The striking design of these new premises was created by owner Andy's uncle, Dan Scurry a Melbourne based Jeweller. His idea for the colourful patterns was inspired by heat mapping, he carefully designed each and every panel in the cafe, working tirelessly with a very patient tiler, handing him one tile at a time.

You might remember the old Ground Up Espresso that was just across the road, it was an old butchers shop that had been transformed into an urban cafe complete with an amazing backyard garden area. The new premises are just as hip, and have plenty in common with the old place - including that it is an old house with oodles of character and a sunny backyard to chill out in. The main difference is that this old house isn't falling down around Andy and the team! 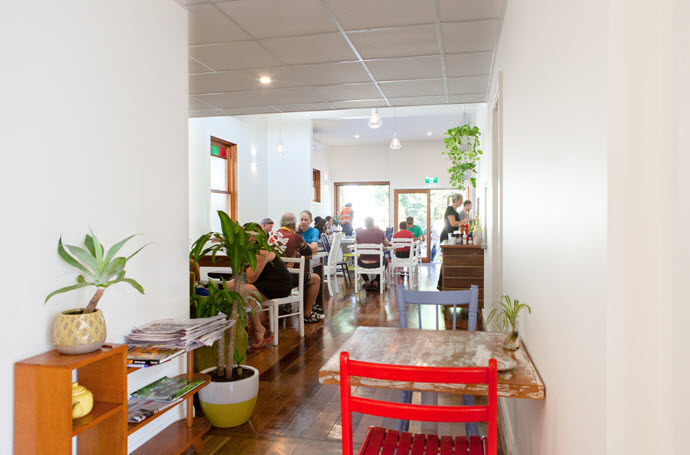 When Andy Scurry relocated from Melbourne to Newcastle years ago, he saw the potential in Carrington, an undiscovered suburb full of young families crying out for a local urban cafe.

Since opening in 2012, Ground Up has established itself as a local favourite for great quality coffee (using beans from Suspension in Beaumont Street) and for its fresh seasonal breakfast which features a couple of my favourites: smoked salmon crepes with creme fraiche, dill and capers, or the breakfast bruschetta, and for lunch they have a great selection larger meals like the popular spinach and ricotta pie or the buttermilk fried chicken burger with spicy slaw and french fries.