We sat down with Alice Lees, founder and baker, to chat about the rise of the cherished bakery

It’s such an amazingly beautiful thing to have fresh bread. I find it quite magical that you’re just combining flour, water, salt and it has life in it.

It started to look serious when the spare room was converted into a commercial kitchen. That was ten years ago. Today, a bricks and mortar bakery, a loyal following, and an airy, al dente, lightly blistered City Loaf speak to the success Alice Lees is too modest to claim herself. Work-booted, humble and completely conscientious, the resolve behind Alice's baking is obvious when I dropped in for a chat. 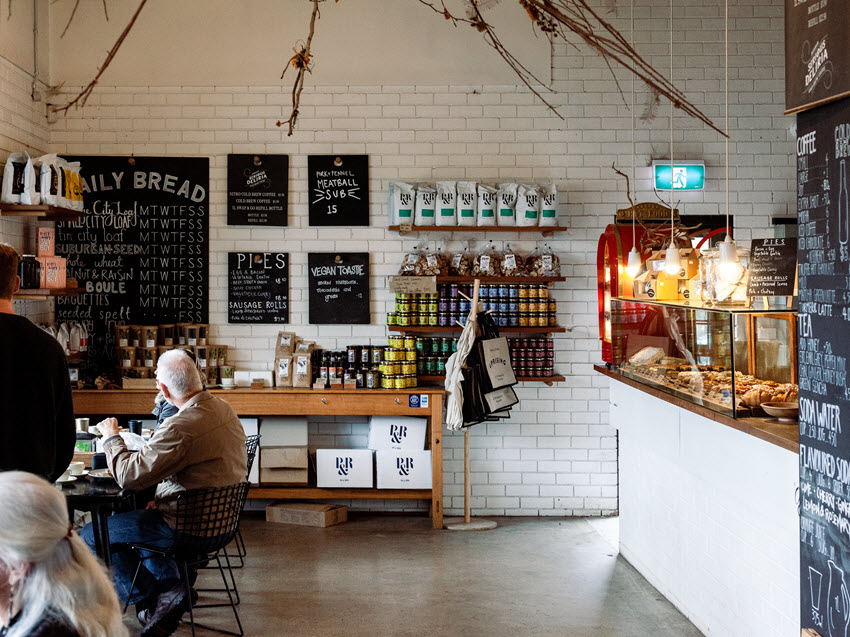 On arrival Alice gives me a quick tour of the bakery: the ovens baking today’s walnut and raisin breads, the bench area where a team is shaping tomorrow’s City Loaves, and the chilled room where another is laminating croissant.

Returning to the café-retail area where bread pilgrims loiter with intent, we settle in to talk baking, the joys of hugging warm sourdough and the white slice behind the mighty sausage sizzle: 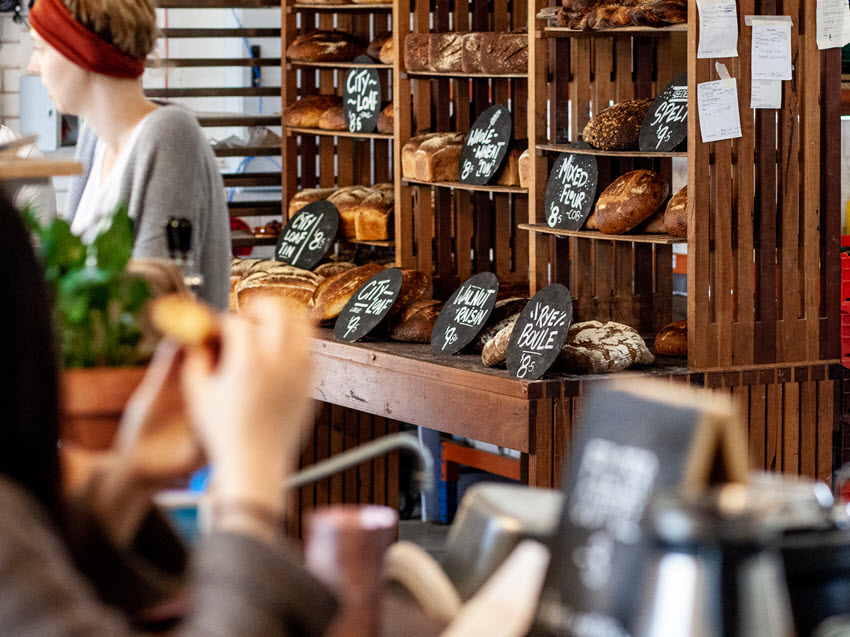 Some breads are so vividly memorable. I was wondering if you had any that stand out as particularly special to you?

Definitely the bread from Iggy’s [Bread of the World] and Sonoma. I remember the first time I ever had one of their miches. When they opened, I think they went over to America and worked with Chad Robertson and learned to make that higher hydration, more open crumb sourdough, the style that we make. And so Sonoma bought this big, bubbly miche to Sydney.

And Silo in Canberra, their bread was probably not quite as open but was still that French miche style, big, round loaves that had a little bit of rye and white so it wasn’t just a plain white bread. The first time you ever have a loaf like that, it’s pretty special. I think all good food, the first time you have it you wonder ‘why haven’t I been eating this?’

You’re probably too young. Do you remember when everyone had a bread maker at home?

That idea of waking up to fresh bread in the house, the smell of it. It’s such an amazingly beautiful thing to have fresh bread. And that’s thing about baking through the day. The smile on people’s faces when they get the bread off the shelf and they hug it and it’s still warm, rather than us coming in and baking it all over night and having the shop all set up and people arrive and it’s cold. Sourdough’s perfectly fine, but it’s particularly special, it smells good, everything about it is special. I find it quite magical that you’re just combining flour, water, salt and it has life in it. 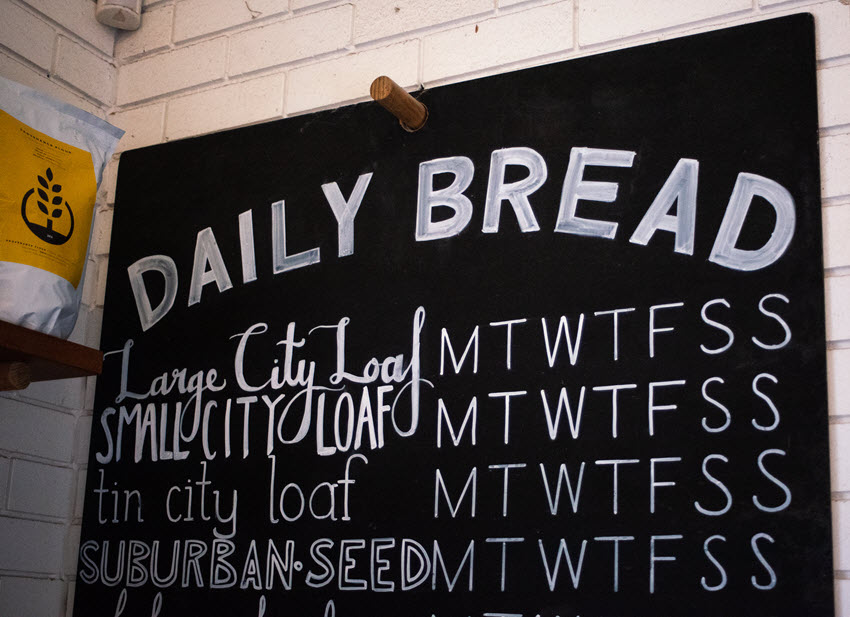 What’s your background? How did you start in commercial baking?

I went to art school in Canberra at ANU straight after school, and then I stayed there for 5 and a half years before deciding to move back to Newcastle. I thought that when you’re at art school, fundraising would be a cake bake sale. I thought that would be an easy thing to do to supplement my income. There was a bit of a hole in the market here because there were so many cafés that were opening up that didn’t necessarily have kitchens so it was quite a good opportunity to sell a product that I delivered daily to cafés and they could sell it while concentrating on their espresso. 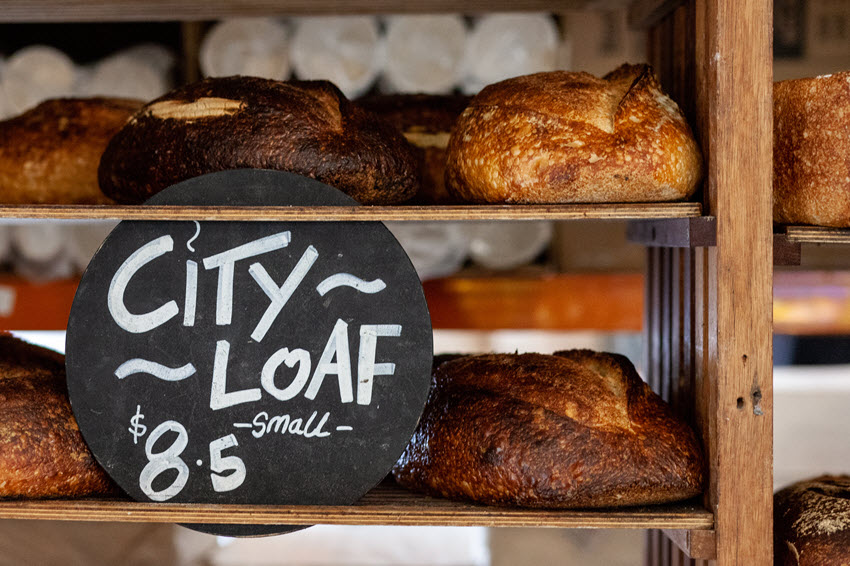 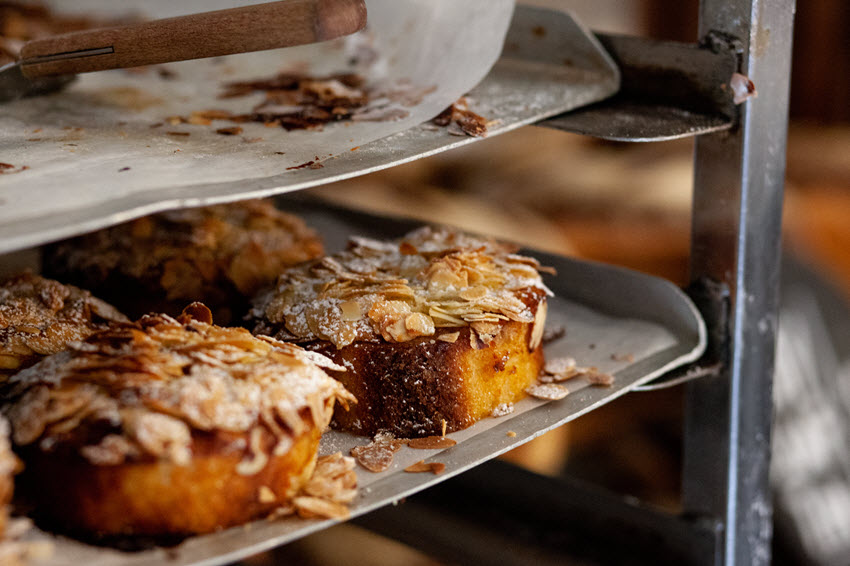 Were you much of a baker before bake sales?

Yeah, I guess I’ve always been a baker. But it was always just a hobby. In Canberra there was fantastic sourdough and when I was teaching at Enmore in Sydney I was picking up bread and bringing it back for my sister and other people. And then I thought ‘I’ll make some of my own’.

Then when I stopped going to Sydney I definitely had to bake it, because there was no way I could easily get Sourdough in Newcastle at that time.

How did you start baking in Newcastle?

I was using the kitchen at the Croatian Club and I opened it up to sell food to people at weekends. Then in the mornings I’d make wholesale muffins and tarts and then just drop them off to cafés around town. That was 2009. I moved into a little house in Islington and I converted the spare room and kitchen into a commercial kitchen. I got a DA approval for here after five and a half years and converted this into an approved premises so it’s been going over 10 years. I think we opened here maybe a week before Christmas 2013.

We had six staff. I was the baker, a couple of baristas and someone in the kitchen. We’ve got 52 staff at the moment. As it’s evolved, it’s so much more about the team than about me taking credit for everything we do. Everybody gets in here and does their job. That’s why it’s the Uprising Bakery. 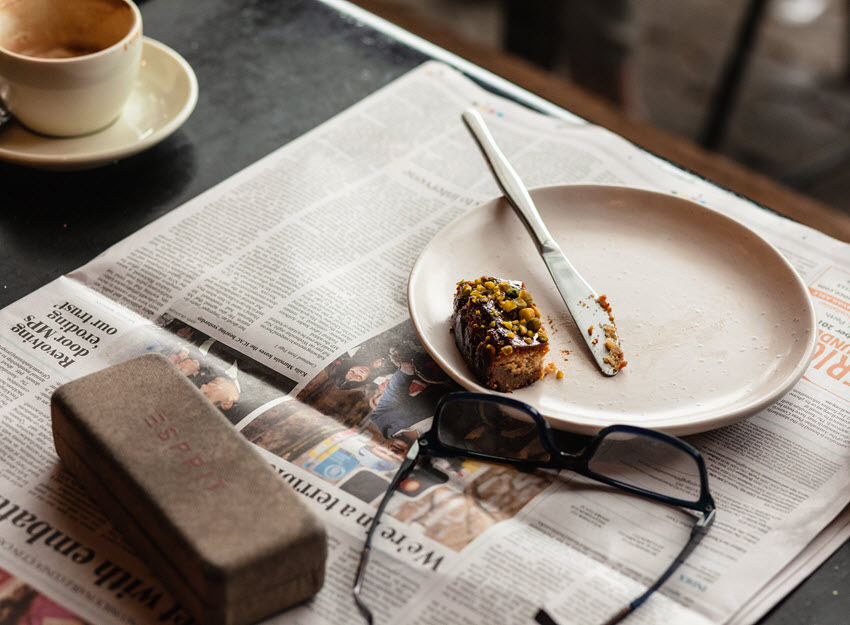 How do you think sourdough became such a phenomenon in Australia?

I guess it would have come from America. Even white bread with a sausage at a BBQ has its place but everyone criticises American factory bread in the 70s. James Beard wrote a book on bread when my parents lived in America, which showed you how to make really good breads. So I used to make the crumpets and the pita breads from that book. I used to love the way they puffed up in the oven.

What do you make the most of at Uprising Bakery now?

Definitely the City Loaf and the stick. We changed from doing a baguette as such, to just a bread stick, so we actually just tip the dough out, cut it and put it straight in the oven. We’re able to bake more when we need it and bake less when it’s cooler, and still do a 100% sourdough, with a higher hydration so it’s bubbly.

The flour we use is single origin. It comes from Northern NSW. We actually have a delivery coming today. 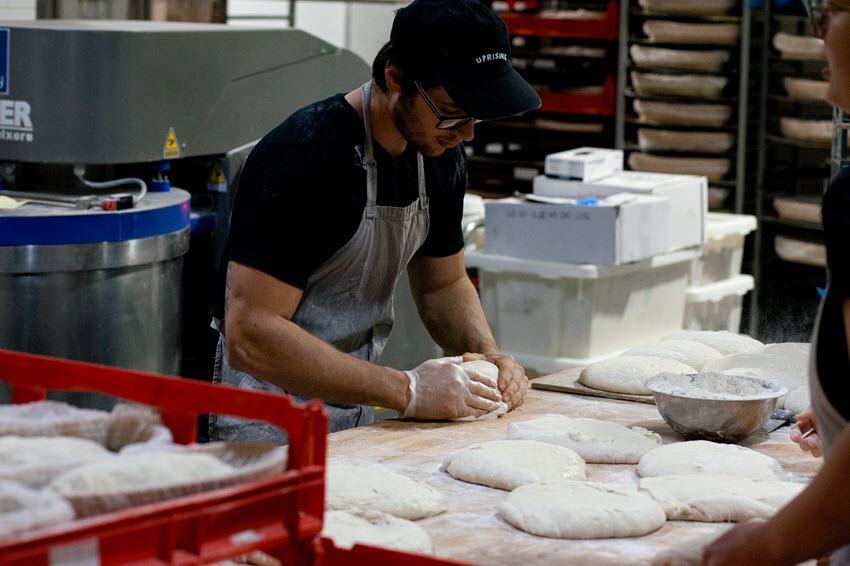 After Uprising makes the flour into bread, a rapid composter in the yard turns all coffee grounds, food scrapings and scrap organics into nutritious mulch.

We went up to our flour suppliers farm and marked out a little area and they used our compost on the soil there. We’re hoping to get some of the grain from there and make a full-circle sourdough one day.

What’s the process for you? How long does it take to make sourdough?

Really… three days. We make the levain, we get yesterday’s and mix it up with flour and water the day before. That makes up 20% of the next days dough, so that’s being mixed and shaped today, and baked tomorrow. 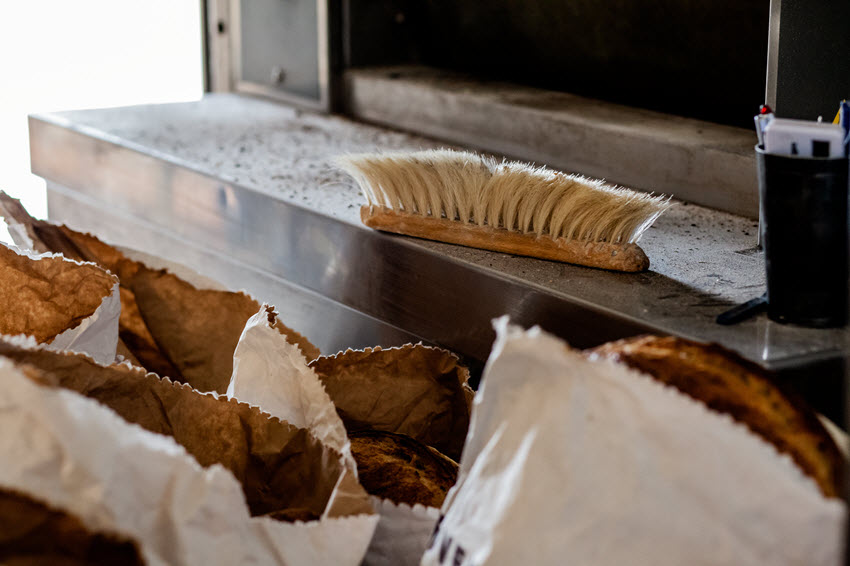 We use some of the croissants from the last batch, the bits that we cut off the end and some levain and that gives a really good flavour. And then we also use the Pepe Saya cultured butter. So it’s got the cultures from the sourdough, and the cultures from the butter coming through there as well. It tends to have a slightly more cheesy flavour than people might be used to, and little bit more savoury, and it gets more savoury if the butter gets a bit more age on it.

We snap freeze them and sell them here and at Harris Farm. There are a few cafés that have them as well and then that becomes their product. The way that they proof them, the way they decide to egg wash them, what they decide to put in the Danish pastry is all theirs. For somewhere like Newcastle you’re not getting exactly the same product everywhere you go, you get that place’s take on it. 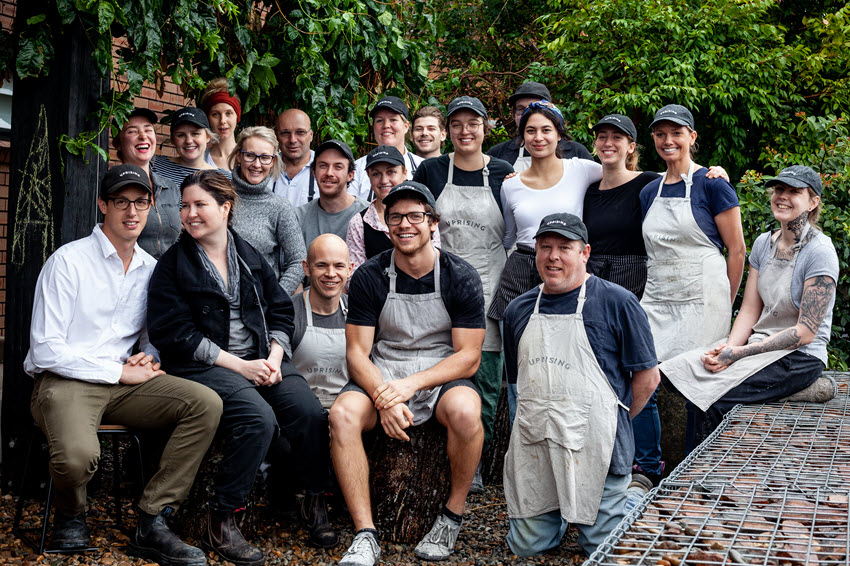