Wickham's fine dining restaurant is back

The refined yet casual restaurant in Wickham is coming back with bookings now available. With two sittings available on Wed-Sat evenings and Sunday lunch for both the dining room and chef counter and the deck reserved for walking.

When we heard news of a new restaurant opening on the edge of the Newcastle CBD mid 2018 we went on the hunt to find out more, fast forward quite a few months later, and Flotilla is what we found.

Sitting off the ‘foodie’ beaten track, Wickham is the lucky suburb to score this incredible little diner. Brought to you by some familiar faces, we first chatted to owners Chris and Zach about Flotilla back in December 2018 on a visit to The Criterion Hotel. The duo had just finished renos on the Carrington hotel and even then, Flotilla had long been in the works.

Now with the doors almost open and keen to check out it out, we dropped in to get all the details.

Hi Chris, thanks for inviting us in. The space looks incredible, how long have you been working on this?

The concept for Flotilla has been bubbling away in the background for a while now, it was probably at the start of last year, so I’d say a good 18 months since we had the initial idea. 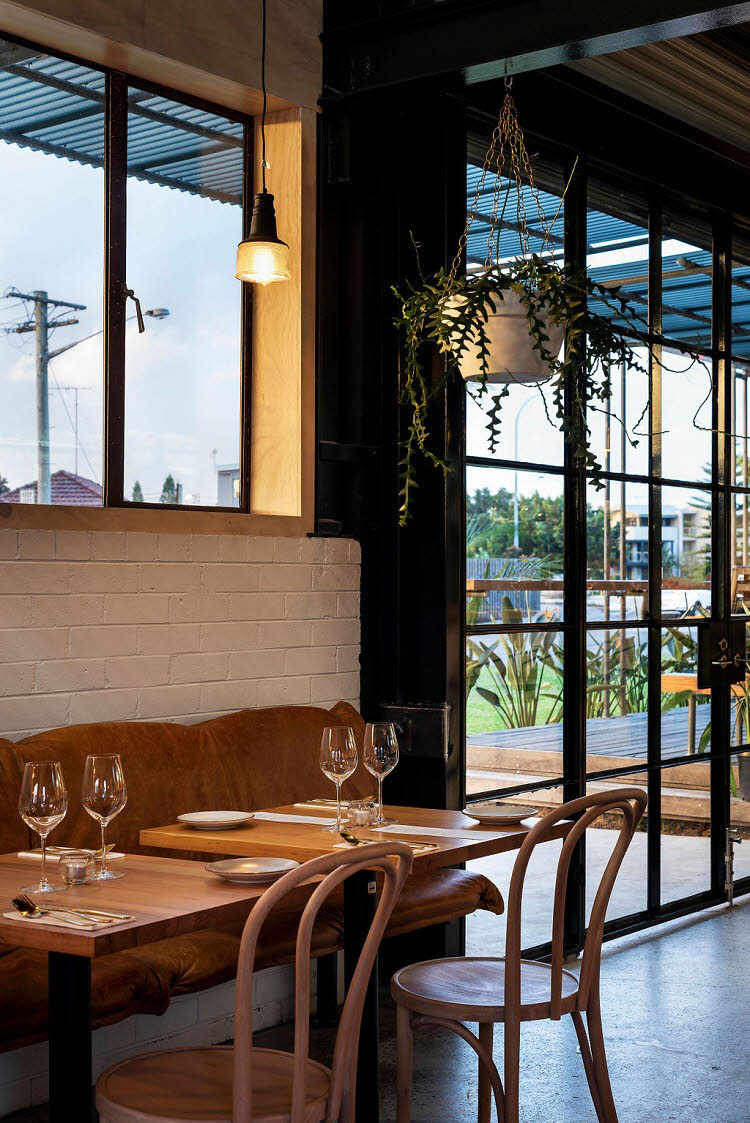 It’s quite different from anything else in Newcastle, where has the idea for Flotilla come from?

I had the rough concept and collectively we developed it up to what it is today together with the guys at Headjam. After doing a killer session with the team they presented a name to us, as we were going around and around in circles.

But for me, a lot of the original inspiration came from Abbot Kinney Boulevarde and Venice Beach in California, then once we delved into it, we recognised some similarities geographically between Wickham, the beach is really close, the harbour and canals and it was all about this hive of activity which is only a couple of blocks back from the beach.

Flotilla also relates to a lot of my travels and going to some really cool places over the years and trying to merge those experiences and atmospheres into a venue.

The building is a really unique space, had you been eyeing it off for a while?

We actually hadn’t looked at the building, but we crossed paths with the guys who owned it and they asked if we wanted to do something with the space. We came and had a look at it and straight away everything about the building was unique - the location, the shape of the room and the changing demographics in the area.

We also felt that Wickham had this new sense of being an inner-city fringe suburb, when you look at cities around the world it tends to be those suburbs on the fringe that have pretty cool and interesting things going on, and you just get the feeling that that’s taking shape here. We wanted to be a part of that and create something that complemented the community and suburb. 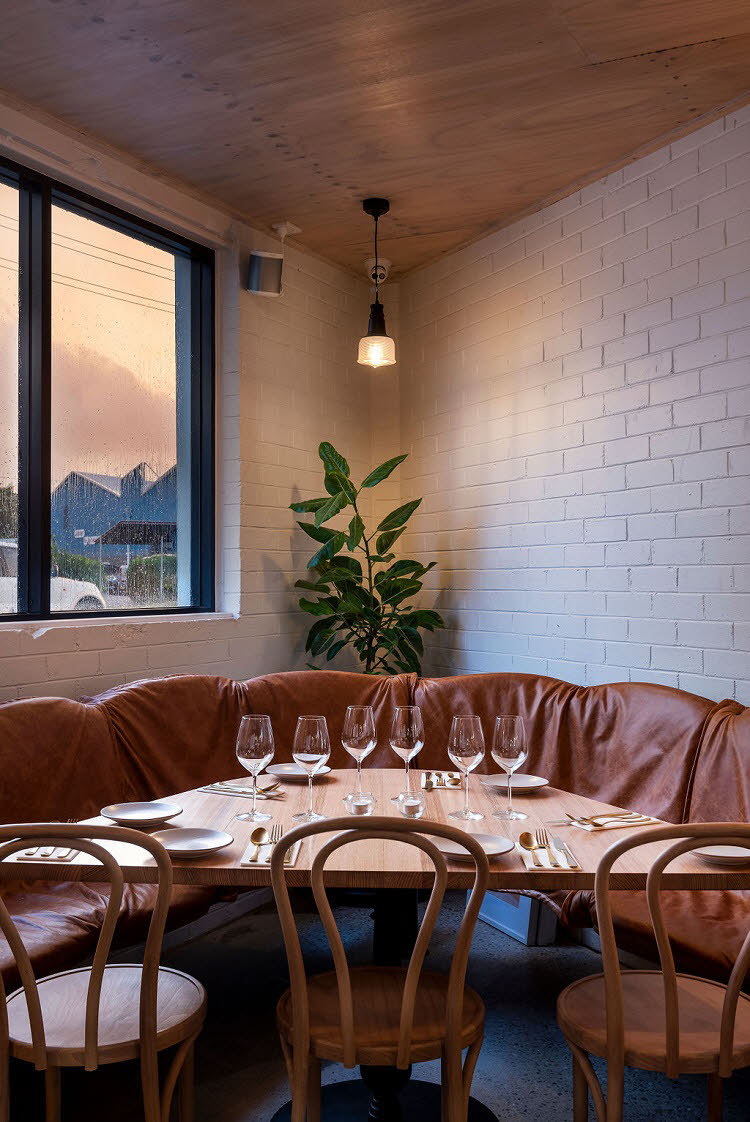 Given its unique layout was it difficult trying to design a floor plan to accommodate everything you required?

We worked really closely with Jason Elsley from Derive Architecture along with a collective of local artists and creatives, it’s probably been one of the most collaborative ventures I’ve ever worked on. Everyone has put their little touch to the venue along the way and it feels as though it has come together pretty smoothly.

Whether it’s The Criterion or The Edwards, the fit outs and design of your venues always seem to be a key component to the overall experience. How did you approach this for Flotilla?

Jason established a lot of the palettes and colours for the venue, Annie Everingham did a fantastic job on the mural, and Sara Spence at Headjam, when we first started working on the project you could just see her eyes light up.

We also worked with Andrew Bradley, who is a local guy, to create all the furniture, he is an absolute legend, there’s nothing that he can’t do.

So there has been a lot of different people involved in bringing it all together, from the wine, to the food, right down to all the little details. I’ve thoroughly enjoyed the whole process and we’ve been fortunate in that we’ve had more time than what we initially thought to get the space prepared, which has helped. 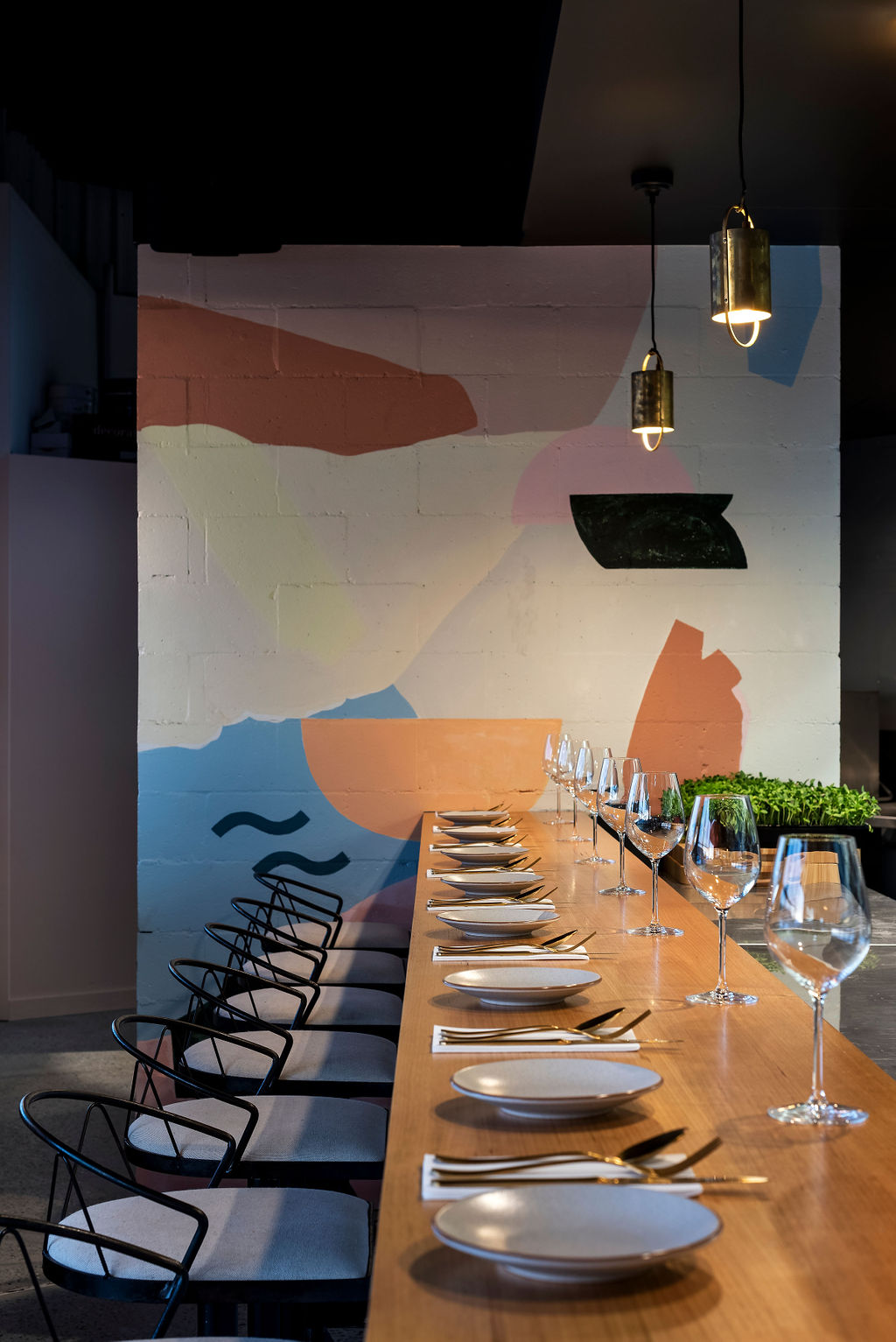 The dining bar that merges with the kitchen is a fantastic addition. Was that something you specifically wanted to incorporate into the restaurant?

Whenever I go to a restaurant, if there is an option to eat at the bar, I always take it and the layout lent itself really well in incorporating that kind of dining experience. It can be a little confronting for the team, but we have some seriously talented staff both in the kitchen and behind the bar, and what they do is so special, there’s no reason why it shouldn’t be on show. 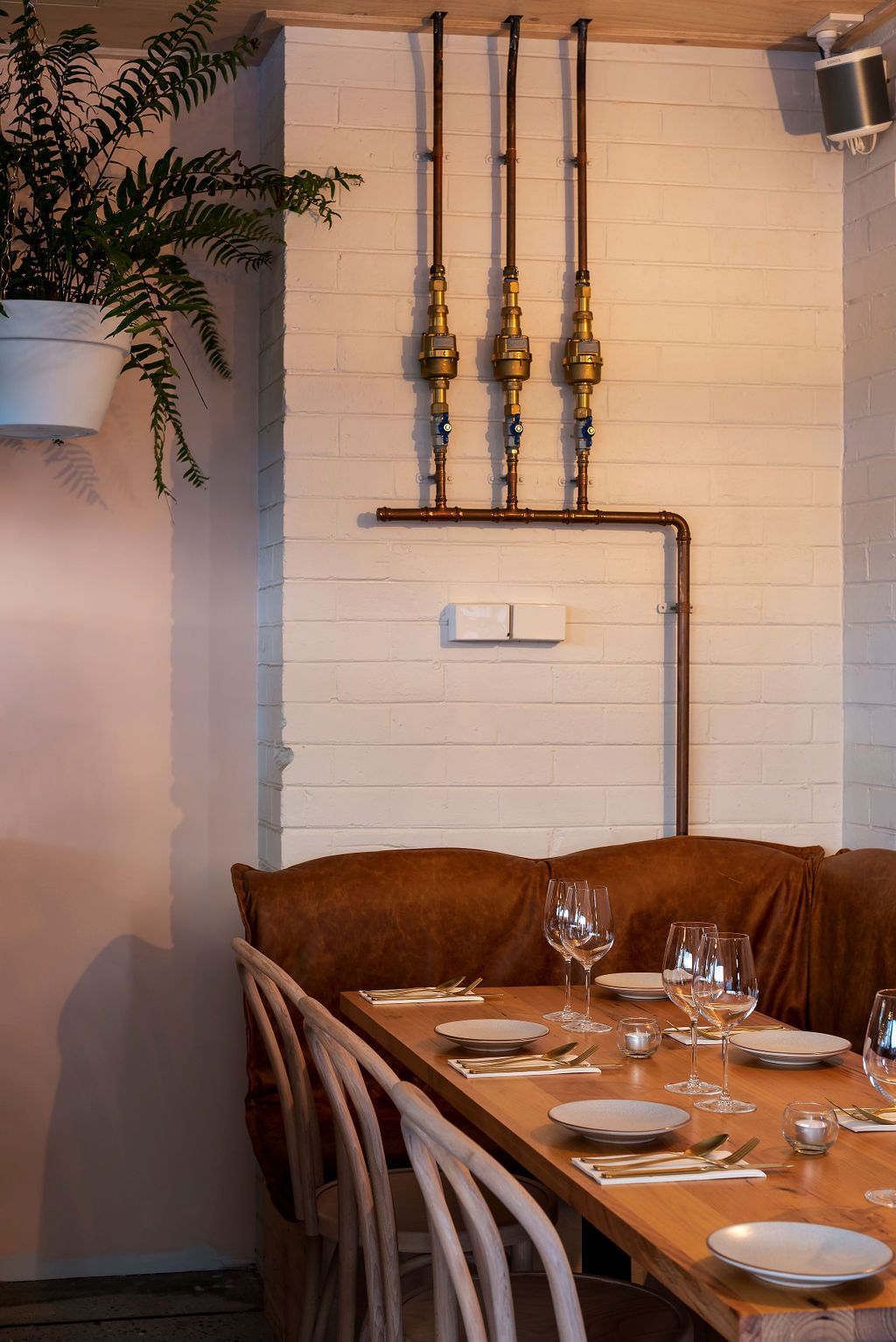 As a guest, what can we expect from the food and wine menu?

The idea for the menu was born out of a refined but casual dining experience, and that’s what we have worked towards. I don’t dress up all that often, but I still like to go out and eat great food, so I guess we wanted to provide was a combination of a relaxed space that allows you to come along and enjoy a beautiful meal.

With the food, we have focused on sourcing awesome Aussie produce and we’re really lucky to have so much of it in this area. We’ve been working with businesses like Newcastle Green’s, Branxton Meats and Shane’s Seafood as well as going further afield so as to get the best possible produce that we can.

With the wine about 98% of the list is Australian. There is a big emphasis on natural wines, as well as a couple of French bottles. Simon, who has taken charge of the wine menu, has sourced a really interesting collection, there’s a nice mix, we haven’t tried to go overly fancy, just fun. 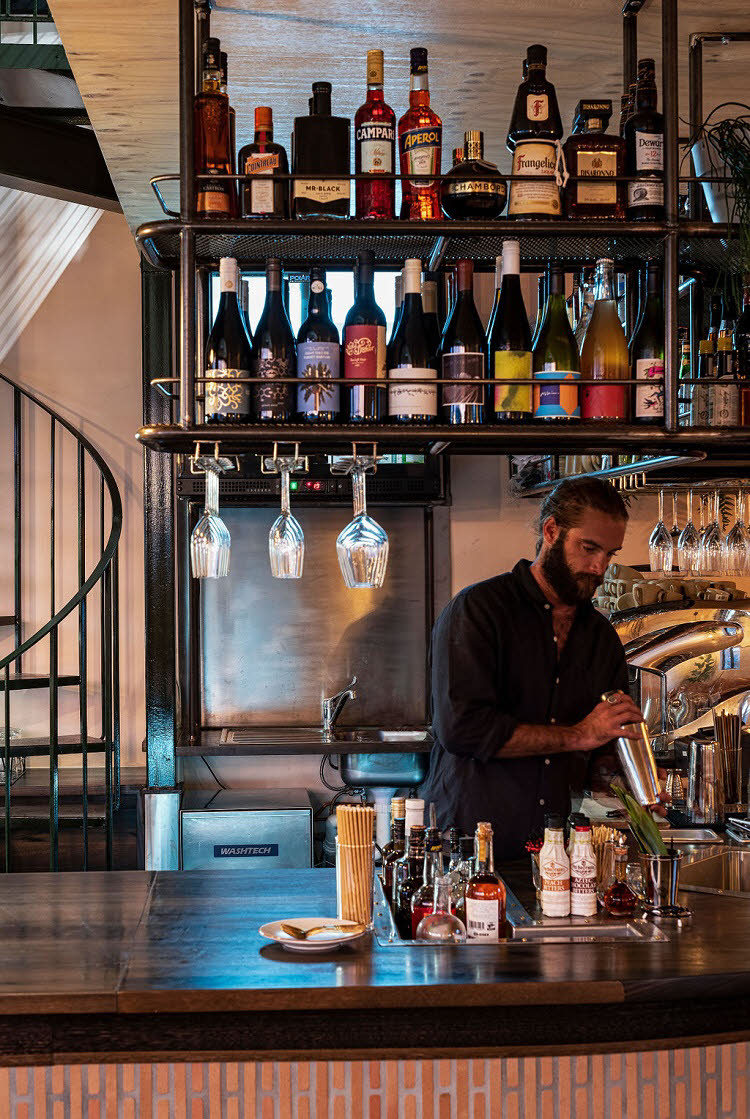 In short, Flotilla is an inviting and refined restaurant and bar that combines exquisite food and wine with an emphasis on Australian produce. Our doors will be open from Wednesday to Sunday, from 3.00pm till late.