The local pastry masterminds have opened up shop at Muster Point

They’ve already earnt themselves quite the following in Newcastle, with their pop-ups across all the best markets in Newcastle as well as inside some of our local cafes quickly making themselves known for their delectable pastry goods.

Since launching in 2017, Covered in Crumbs’ loyal following has been anxiously waiting for them to open up a permanent space. That moment finally arrived in December 2020, where we all flocked to their physical patisserie space sitting amongst the creative collaborative space at Muster Point in Mayfield East. 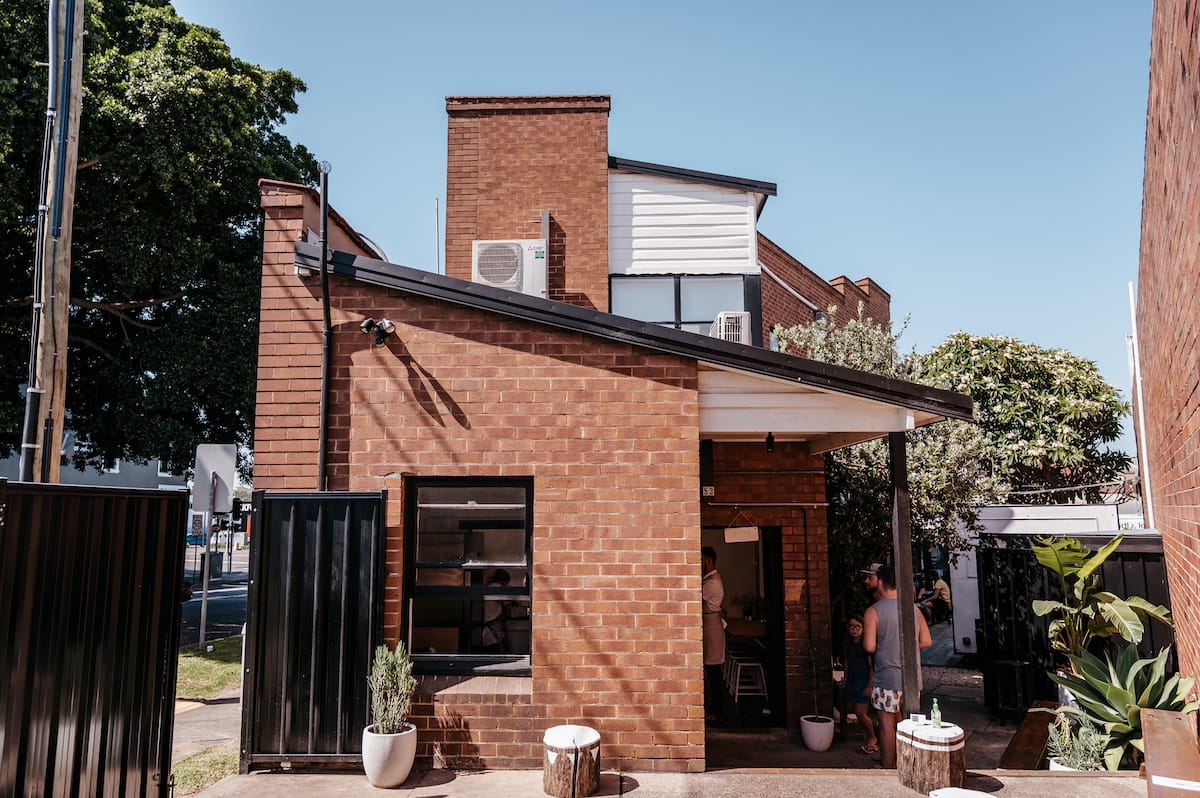 With over 17 years in the hospitality industry, Gareth has gone from being a kitchenhand in a small cafe in his hometown in New Zealand, relocating to London working as a Pastry Chef at The Ivy before moving to Michelin starred restaurant La Chapelle. To moving to Newcastle to work in some of our most refined restaurants alongside some of our region’s most talented chefs including a role at Subo and becoming Head Pastry Chef at Restaurant Mason. 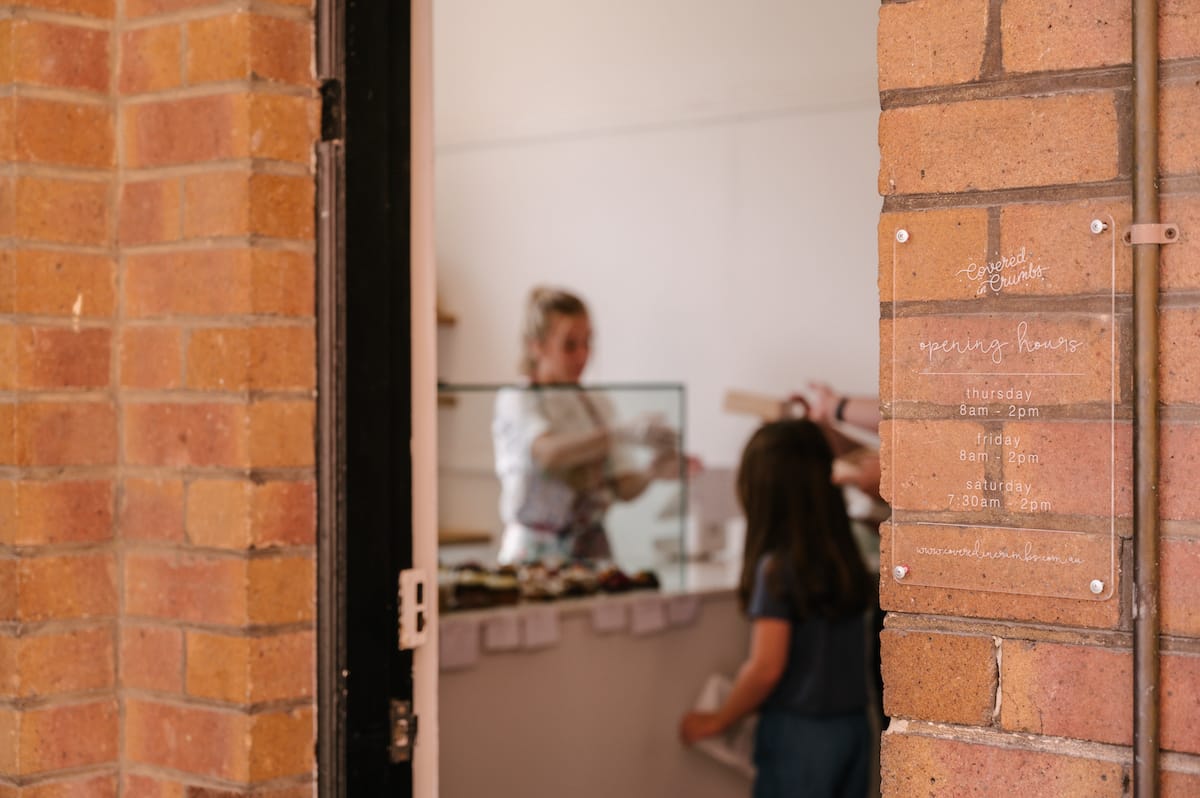 Following his expansive career in the many realms of hospitality, Gareth pursued his Certificate IV in Hospitality Business in 2016 with hopes to own his very own Patisserie. In 2017, that dream turned into a reality.

Brought to us by young couple Gareth and Paula alongside their littlest helper, Elsie, Covered in Crumbs was launched as a pop-up bakery back in late 2017 at the Newcastle West coffee spot, Sherwood Coffee Bar. 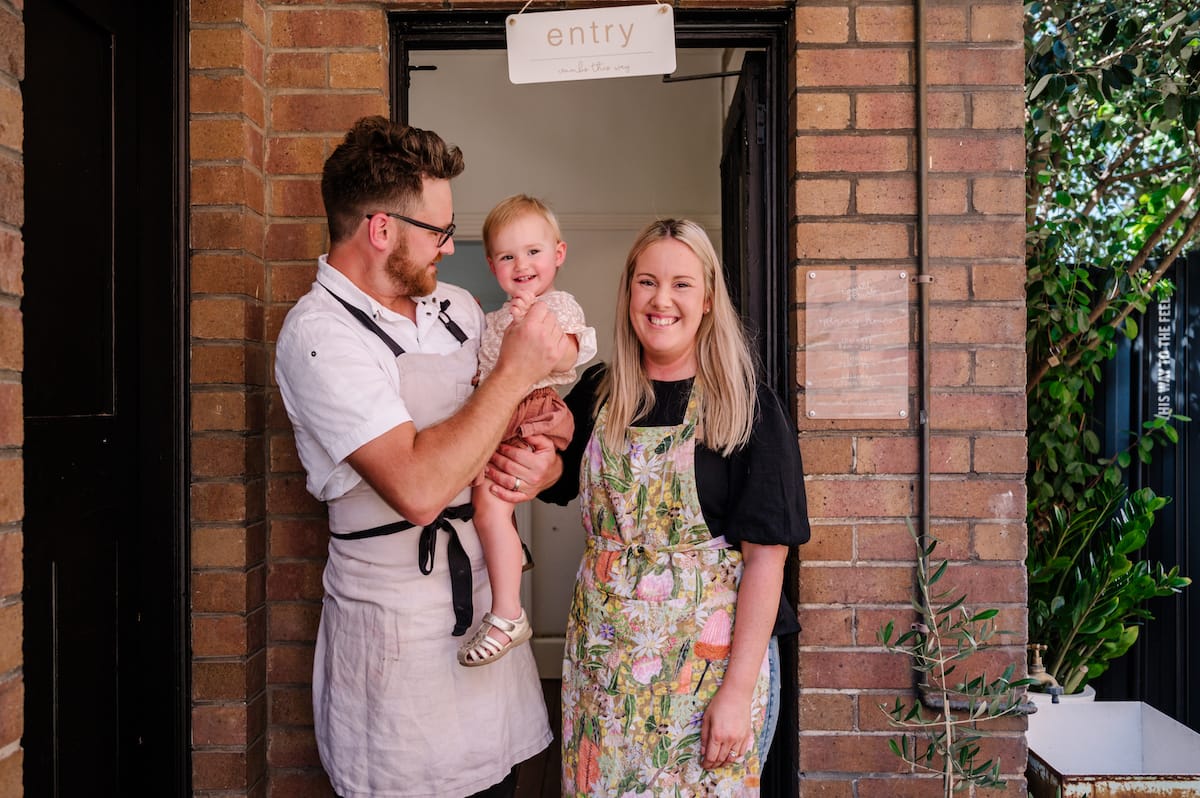 Now, three years on and with many markets up their sleeves and countless cafes, Covered in Crumbs is finally staying in one spot calling Mayfield East home.

“Markets, popups, caterings, weddings, wholesale. The past three years have been full of everything,” Gareth said.

The past 18 months have seen the young couple bounce around Newcastle looking for the perfect space to call home for Covered in Crumbs. 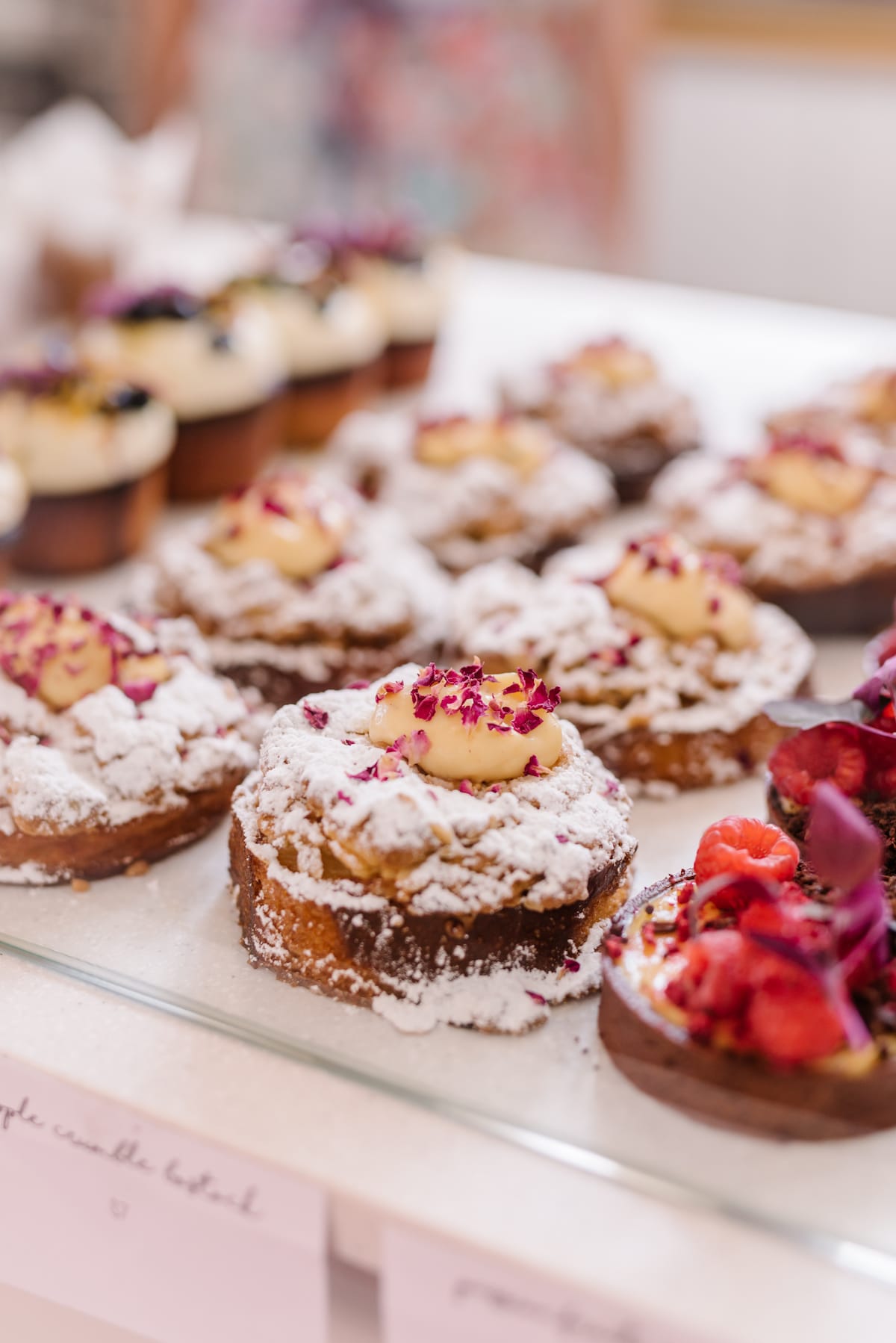 “Ideally, we wanted the kitchen and the shopfront together and we just had that set on our mind. We thought that was going to be more convenient and after about 12months of looking, applying for places, and getting knocked back we decided we might need to think outside the square here.

“People kept saying to us that the right place will come along at the right time. It was so frustrating at the time because we were so ready to take this on. But then this opportunity came along,” Paula said. 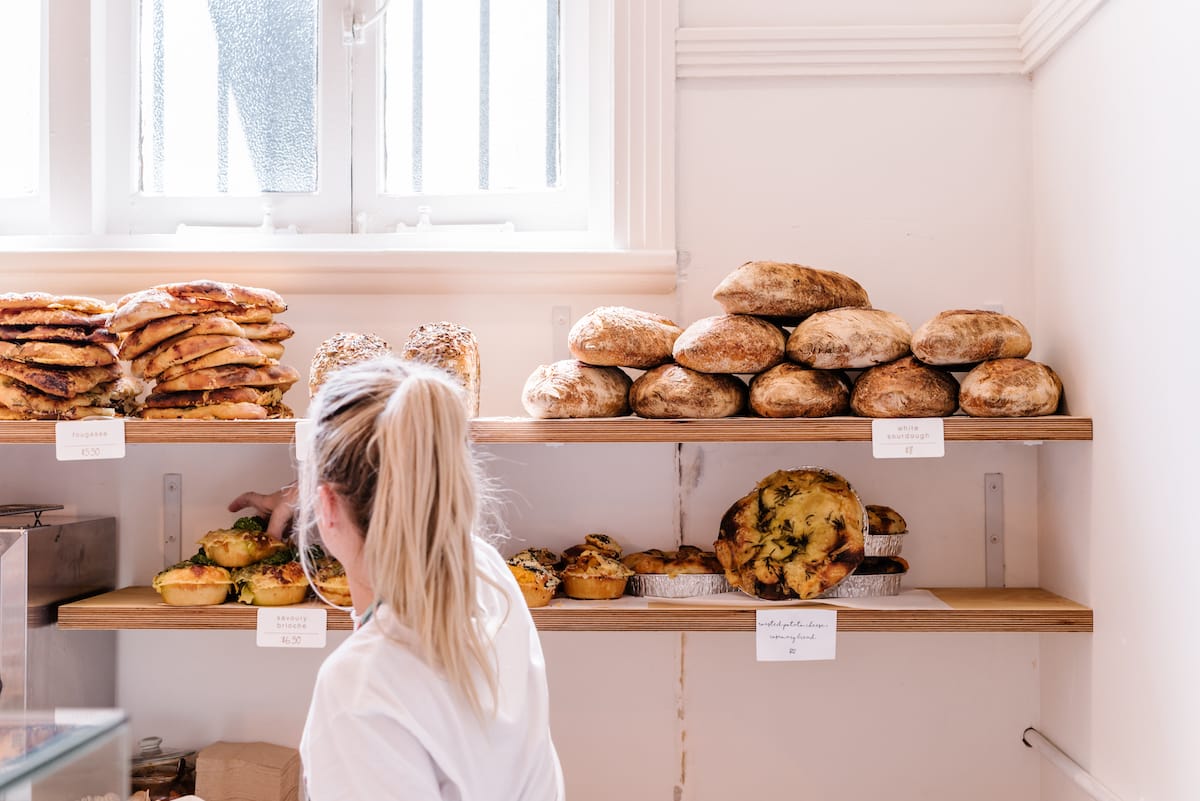 The girls behind Muster Point, Kristy & Tennille, had been renovating their creative hub in Mayfield East when they reached out to Gareth & Paula in June last year about taking over the cosy space out the back.

“Originally, we weren’t too sure. But, after we actually saw the space, it just felt like us. It just felt right.”

The space finally came to life with many Covered in Crumbs followers lining up for their goods on their opening back on the 13th of December. 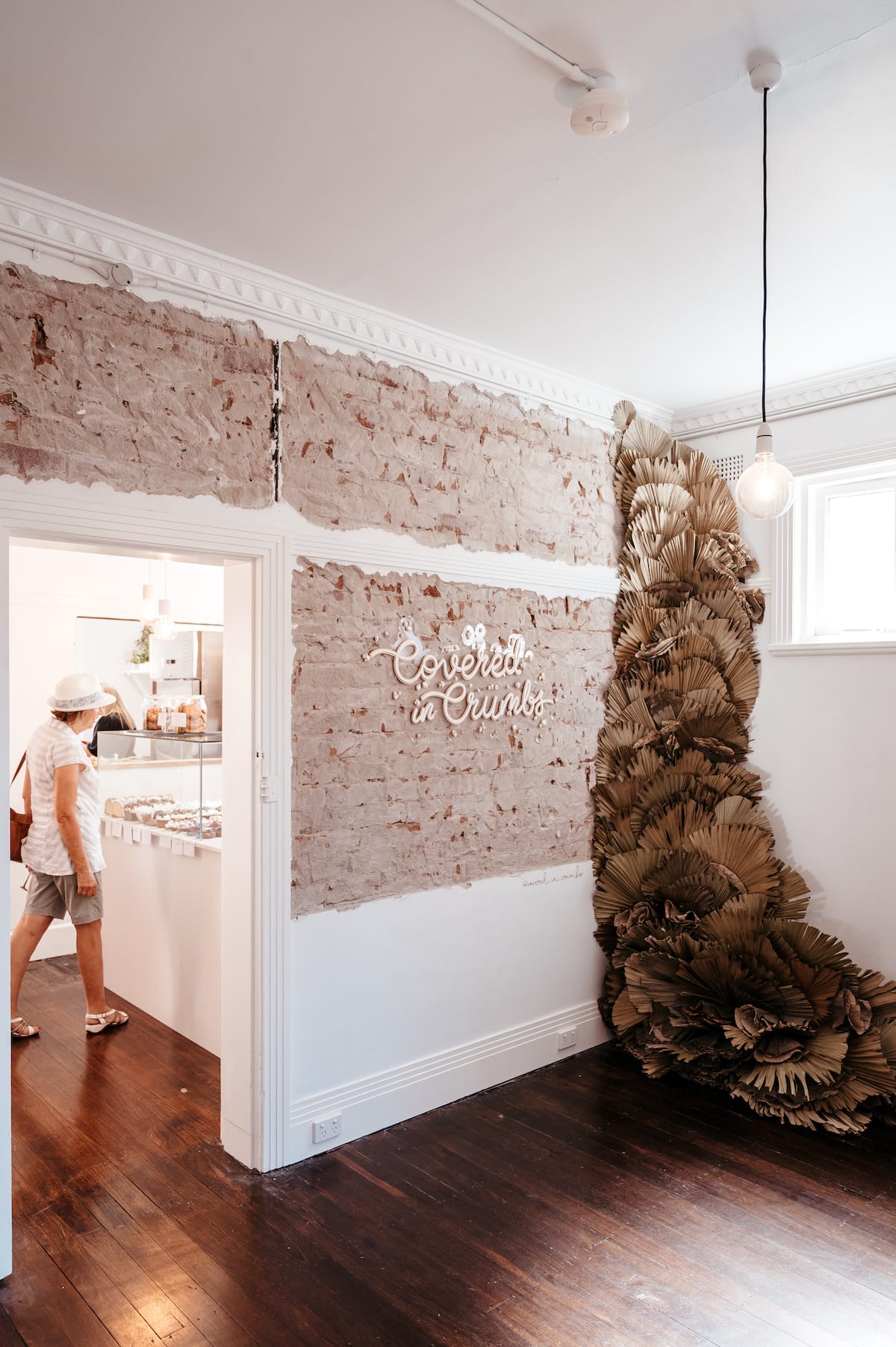 “It makes me nervous thinking about the first day we opened. I get butterflies in my tummy every time before we open. I remember opening the door and thinking oh my goodness. We ended up carrying the sign out together so we could see everybody lining up and we took a moment to really soak that up.”

Walking out to a HUGE line that went up towards the Coles Mayfield carpark, Gareth and Paula were welcomed with cheers and clapped (and no doubt some rumbly tummies).

“I guess it’s just really reassuring for us because you’re always questioning whether or not you’re doing the right thing or whether it’s going to work. It’s reassuring to see all of these familiar faces lining up each week. You just feel really supported,” Gareth said. 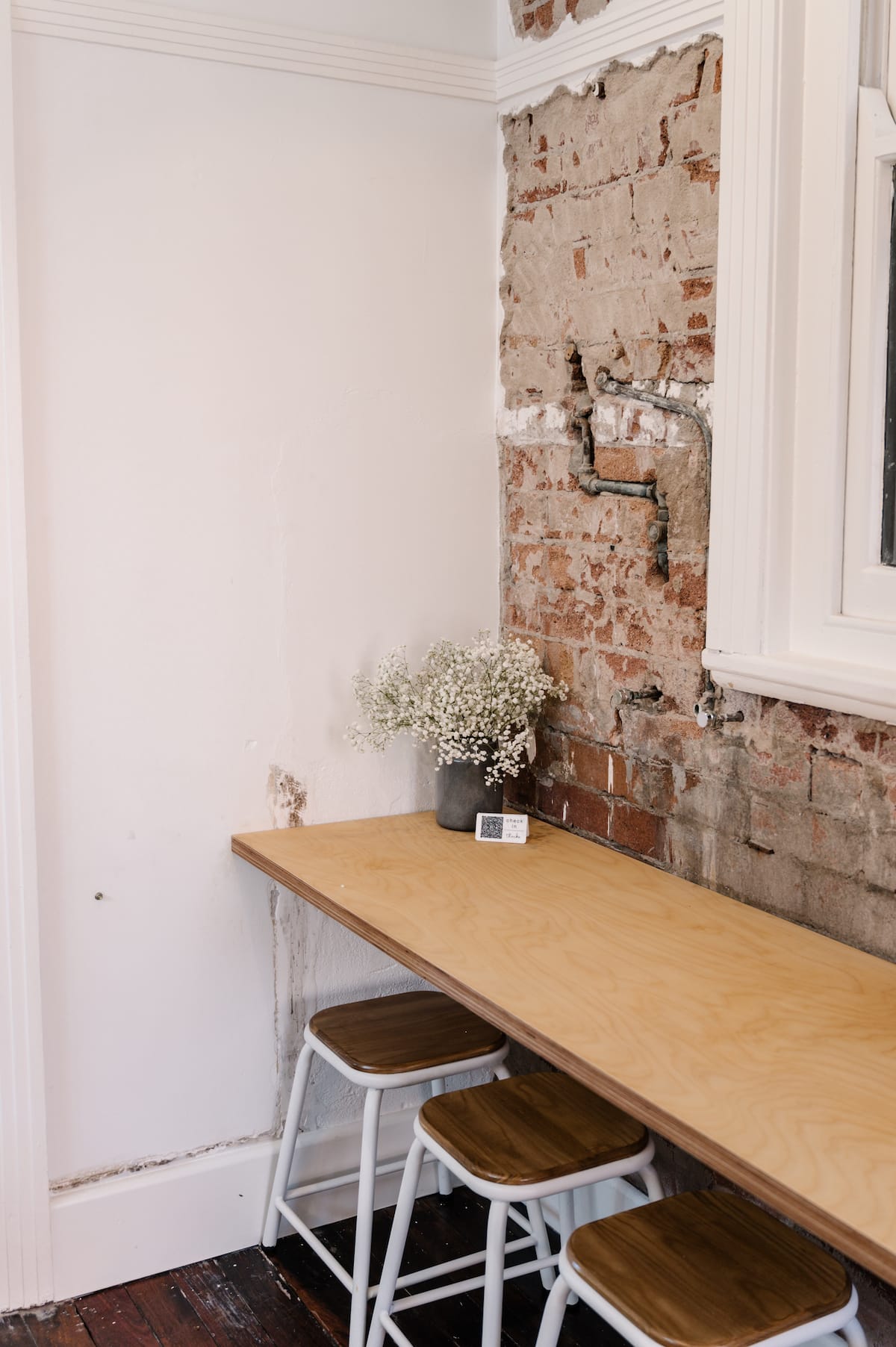 The space itself might be cosy but it still packs a punch with all the goodness that comes alongside Covered in Crumbs. The interior showcases urban-styled exposed brick paired with the brand’s signature light and clean colour palette, their mouth-watering baked goods display, and all of the savoury goods lining the back wall.

Each time you drop into the Mayfield East space is never the same. With a full cabinet filled with nib cakes, cookies, tarts, all garnished with the signature Covered in Crumbs florals and of course, all of the bread loaves and savoury brioche’s your heart could desire. 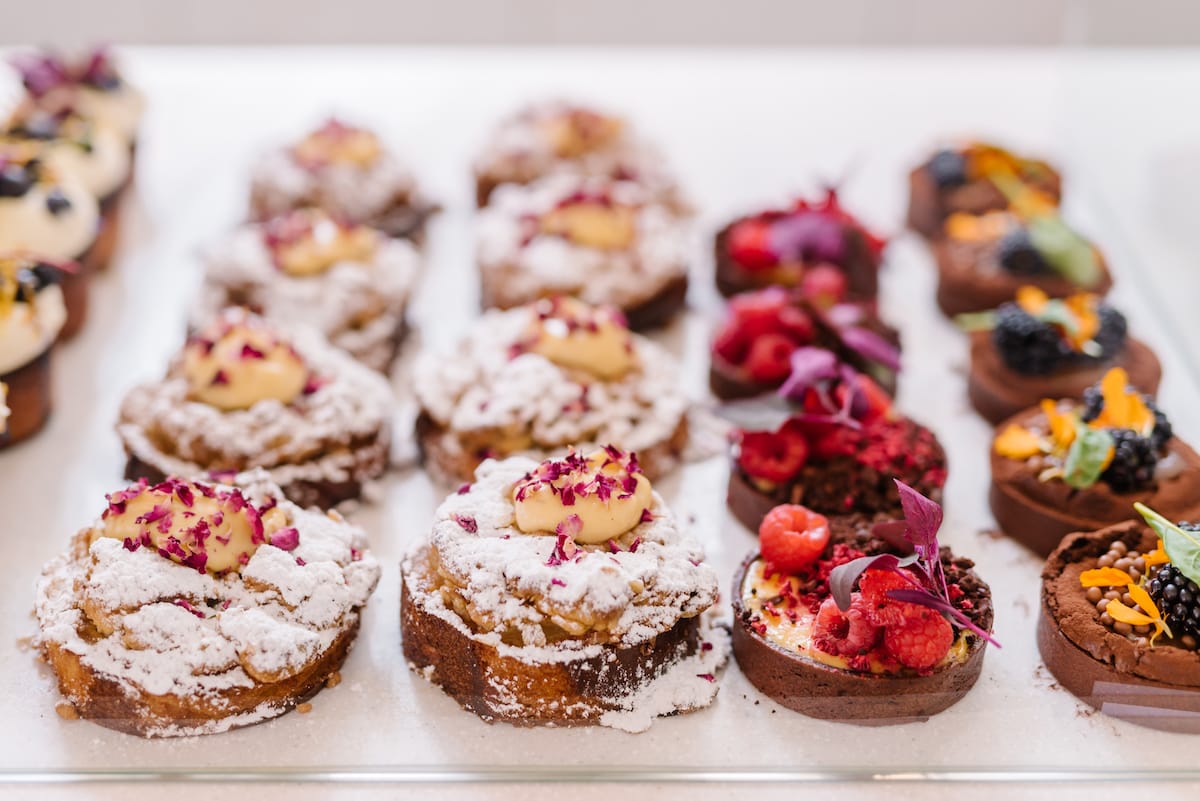 Sitting within the Muster Point collective, visitors know they’ll always be able to pick up a good ole cup of joe courtesy of the team behind Perry the Feeder as they sit back in the courtyard and nibble on a special goodie from Covered in Crumbs.

The Covered in Crumbs team have big plans for 2021, with hopes to focus on their catering side of the business, explore new market ideas, expand their wholesale offering and of course, bring all of their customers new and exciting foodie delights. 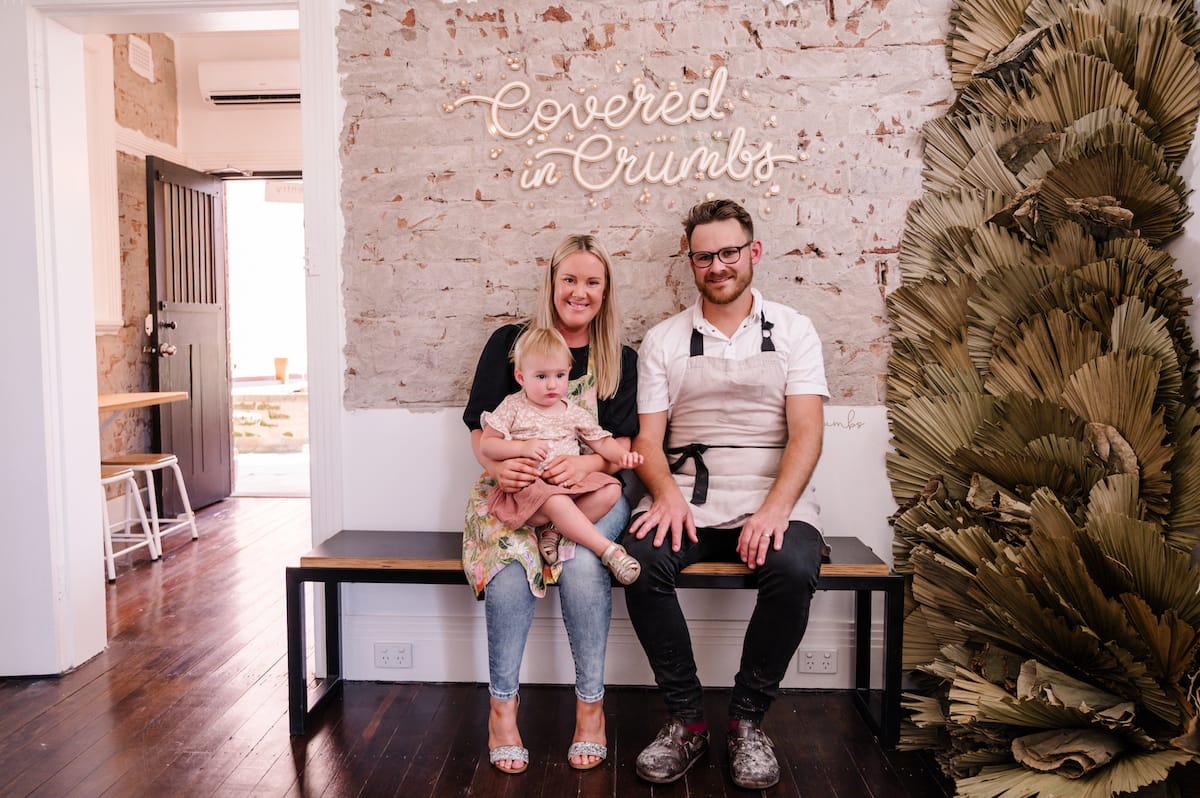 “I think for us, it’s been a huge few years. We wouldn’t be here if it wasn’t for our friends and family. We’ve been so lucky with the support we’ve had. Overall, we definitely feel the love from all of our customers and we’re just excited about this and we hope that there is a lot more to come,” Paula said.

Get into Covered in Crumbs and treat yourself to one of their delicious goodies!

The little espresso bar in Mayfield has expanded!

A deliciously fresh and friendly espresso bar in Mayfield West