SummerSalt is coming to the beautiful Roche Estate, Hunter Valley with an outstanding line up: THE TESKEY BROTHERS, THE CAT EMPIRE, JOHN BUTLER, BOY & BEAR, MONTAIGNE and EMILY WURRAMARA.

In Summer 2022, SummerSalt will take place in some of the most picturesque and iconic locations around the country including a bunch of new and fresh locations. On top of showcasing the best of home-grown Australian artists, it will also bring cultural attractions, in a family friendly environment, placing a very heavy emphasis on local community and sustainability. 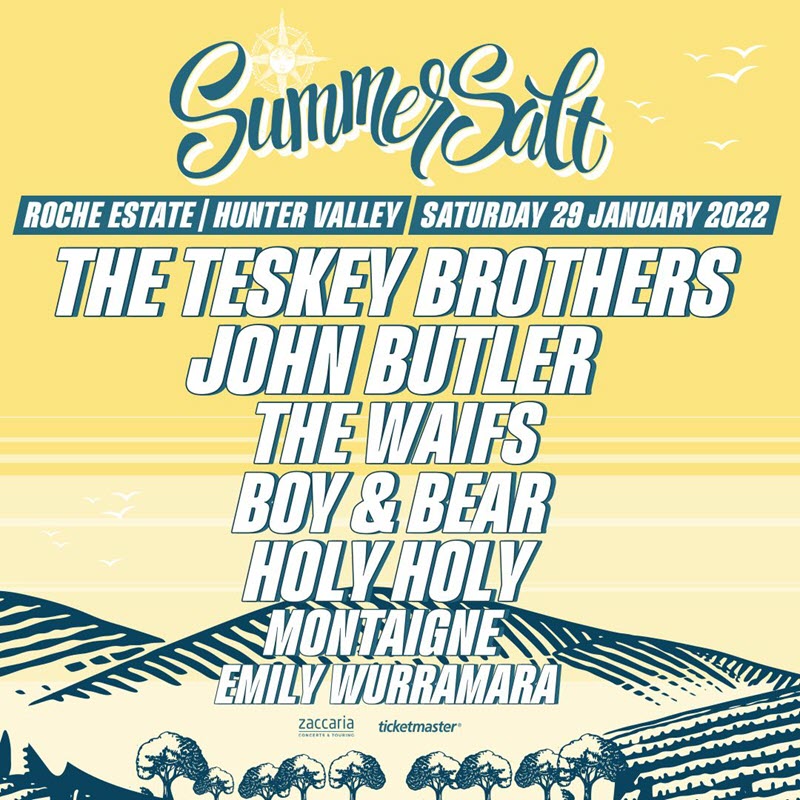 Aiming to provide a truly unique feast for the senses - an eclectic series of concerts with a focus on these proven and beloved performers, and introducing some fresh talent, creating the perfect setting to either dance with your friends or sit back and chill to the tunes. Summersalt will be a day/evening of
fun in the sun with the perfect soundtrack to match. Respecting the gorgeous summer settings they operate in the team will be including green initiatives to minimise their impact to these locations and beyond.

SummerSalt has continued to deliver cream of the crop artists to the great Australian outdoors, and this stellar line up shapes up to be one of the best!

2020 Grammy nominees The Teskey Brothers have come a very long way in a very short time. The four friends from Melbourne, Australia have seen a meteoric rise in popularity in the past 12 months, amassing a legion of fans all around the world with their timeless soulful recordings and stunning live shows. The band’s latest studio record Run Home Slow has been a global hit with elements of soul, blues, southern rock, Americana, psychedelia, and gospel, and the striking single ‘So Caught Up’ which won the AAA category of the International Songwriting Competition and landed the band TV appearances in USA, Australia, New Zealand and Germany.

Onstage The Teskey Brothers pull out all stops, conjuring a rare soulful energy and raw emotion. Josh Teskey’s once-in-a-generation voice defies belief as the band, including horn section and organ, ignites around him. They have been crowd favourites at Latitude, Fuji Rock, North Sea Jazz, Love Supreme, Citadel, Bonnaroo and many more, not to mention selling out pretty much all of their own headline shows.

2020’s live album ‘Live at The Forum’ debuted at number 1 on the Australian album chart and has been described by American Songwriter magazine as “a near perfect live recording”.

John Butler has an impressive one million album sales to his name, he remains one of the most successful independent artists in Australia’s history, has been the No. 1 most played artist on Australian radio and has numerous ARIA awards to write home about. The latest release of their seventh studio album HOME
debuted at #1 on the ARIA Charts. John Butler & his Trio have cemented an earnest reputation as one of the best live blues and roots acts to this day.

2019 saw Boy & Bear triumphant return to the international touring circuit to promote the release of their album ‘Suck on Light’ which was rated by triple j’s Richard Kingsmill in his top 10 albums of the year. An acoustic album of some of their favourite tracks followed in September 2020, with the band returning to
the studio to write more music and work on new creative pursuits they have in the pipeline. Celebrated for their unique sound, rich harmonies, and trademark warmth and charisma, Boy & Bear take to stages around Australia late summer delivering the musicianship and connection that their live audiences have
come to love throughout their career.

The voice of the new generation, Sydney based artist Montaigne (born Jess Cerro) at only 24 has become a major name in Aussie indie music. The past few years have seen her recognised for her work with multiple spots on the triple j’s Hottest 100, an ARIA award for ‘Best Breakthrough Artist’ and a further
nomination for ‘Best Female Artist’ in 2016, plus J-Award nominations. Her debut album ‘Glorious Heights’ (produced by Tony Buchen) hit the charts at #4 and her sophomore album ‘COMPLEX’ was released in 2019 to rave reviews.

Emily Wurramara is a talented singer-songwriter from Groote Eylandt, an island off the coast of Australia’s Northern Territory, who is now based in Tasmania. Through her music, she shares stories of country, family and culture sung in English and her traditional language Anindilyakwa. Her debut album Milyakburra is steeped in the sand, salt and concrete of her family, community, islands and all of the souls that have played a part in her journey so far. Milyakburra, released on Wantok Musik, was critically acclaimed and played widely on triple j & ABC radio amongst others. The album was nominated for the 2018 ARIA Award for ‘Best Blues and Roots Album’ and received four 2019 Queensland Music Award Nominations. The album also won the ‘Best Blues and Roots Album of the Year’ at the 2019 AIR Awards. Emily is in high demand to perform in Australia and internationally. Her new single, ‘Cruising' to be released this summer, with her Sophomore album due out in 2021.

and the newly announced The Waifs and Holy Holy