Framed by bushland this Pretty Beach house is extraordinary

Picture this… you want to build your dream house on your dream piece of land. What if this meant overcoming almost every conceivable obstacle along the way? Would you just give up and move on? Many did and many would (including me, I suspect).

The build of this sculptural piece of engineering excellence, completed in 2021, was a feat in tenacity, determination and a whole lot of talent.

The brief was simple - a low-maintenance house framed around looking out to the beautiful forest and fern filled gully, with a feeling of being elevated within the trees. Sounds pretty straight forward, right? 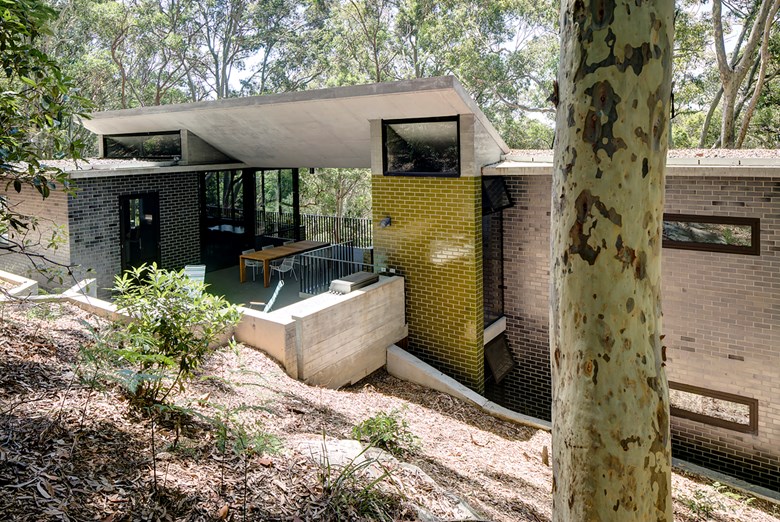 It was anything but. On a challenging bush block on the edge of Bouddi National Park at Pretty Beach, the house took seven years to design and build. Not only was the site steep with an average gradient of 1 in 3, it was situated in the most extreme bush fire zone and within an Endangered Ecological Community which was home to the vulnerable Red Crowned Toadlet. Sound challenging enough yet?

But wait… there’s more… the site also sits within a Scenic Conservation zone, limiting options for clearing and building.

Oh, and the number of steps needed to be kept to a minimum to allow for easy living so it’s owners could remain in the house in their later years. 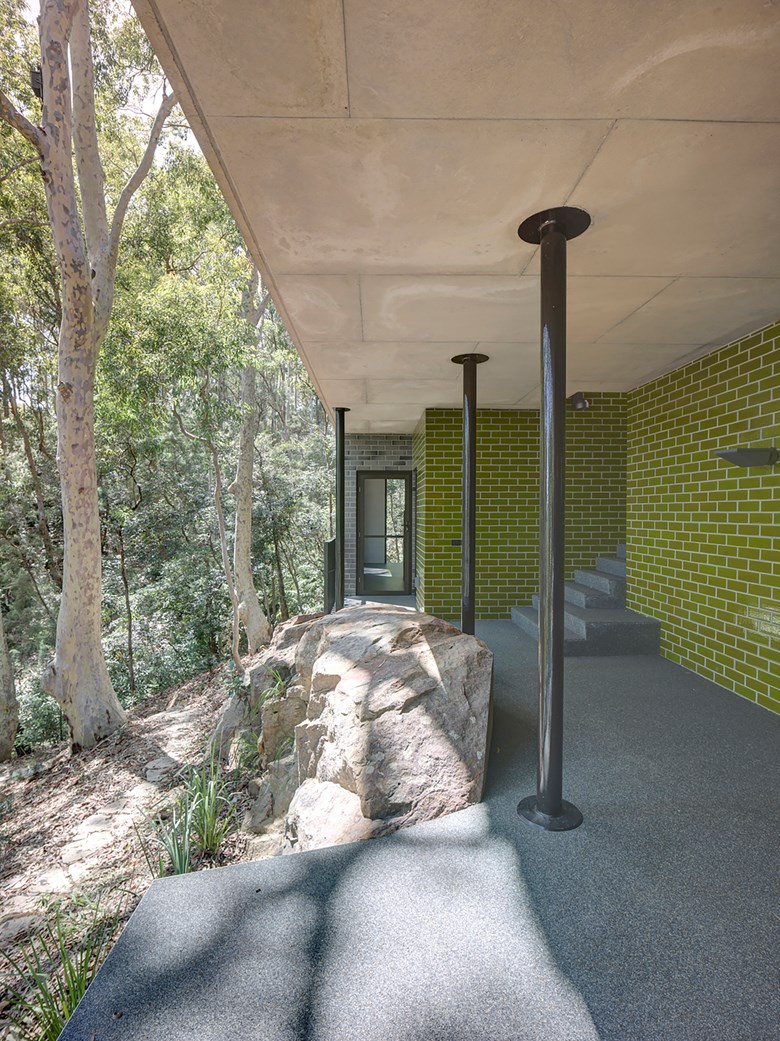 So how did the team of owners, architects, engineers and builders overcome all of this? With intelligent and groundbreaking design.

Due to the nature of the site, this was a very complex building to realise. Lahznimmo Architects worked closely and collaboratively with the builders, Blair Build to work through all the buildability issues from beginning to end. Of particular importance was agreeing on the pouring sequence of the concrete and how pour joints could be managed practically and aesthetically.

The greatest challenge was the roof slab, which incorporated a sloping section and had to be a single pour to minimise potential cracking and water ingress. Geotechnical conditions required deep piling, adding significant cost to the project when compared to building other houses on different sites. 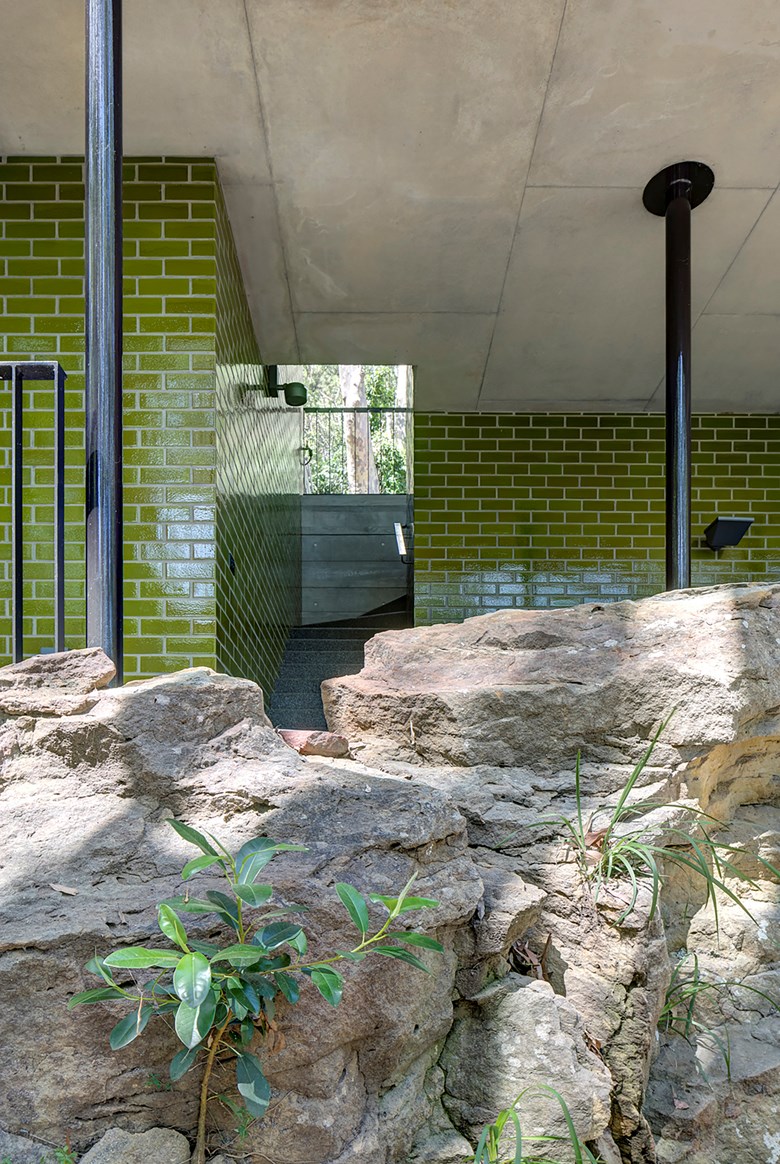 With a narrow linear footprint running along the contours to minimize cut and fill, the house is anchored by two large exposed sandstone outcrops either side of the entry landing that frame vertical circulation and a large central breezeway on the second level.

Built entirely of non-combustible materials, including off-form concrete slabs and walls, structural steel columns and glazed brick infill walls, the house demonstrates an approach to building within ecologically sensitive sites prone to bush fires. Concrete slabs for lower, upper and roof levels are the principal expression of the house and emphasise the horizontality.

The decision was made that, once having set up a building site, the completed building should be designed to not require maintenance in the foreseeable future. Materials were selected on the basis of their longevity, and ability to age gracefully without maintenance.

This included glazed brickwork and an off-form concrete roof which can withstand fire, ember attack and falling branches and also allowed for minimal removal of trees, with some mature spotted gums retained close to and overhanging the house. 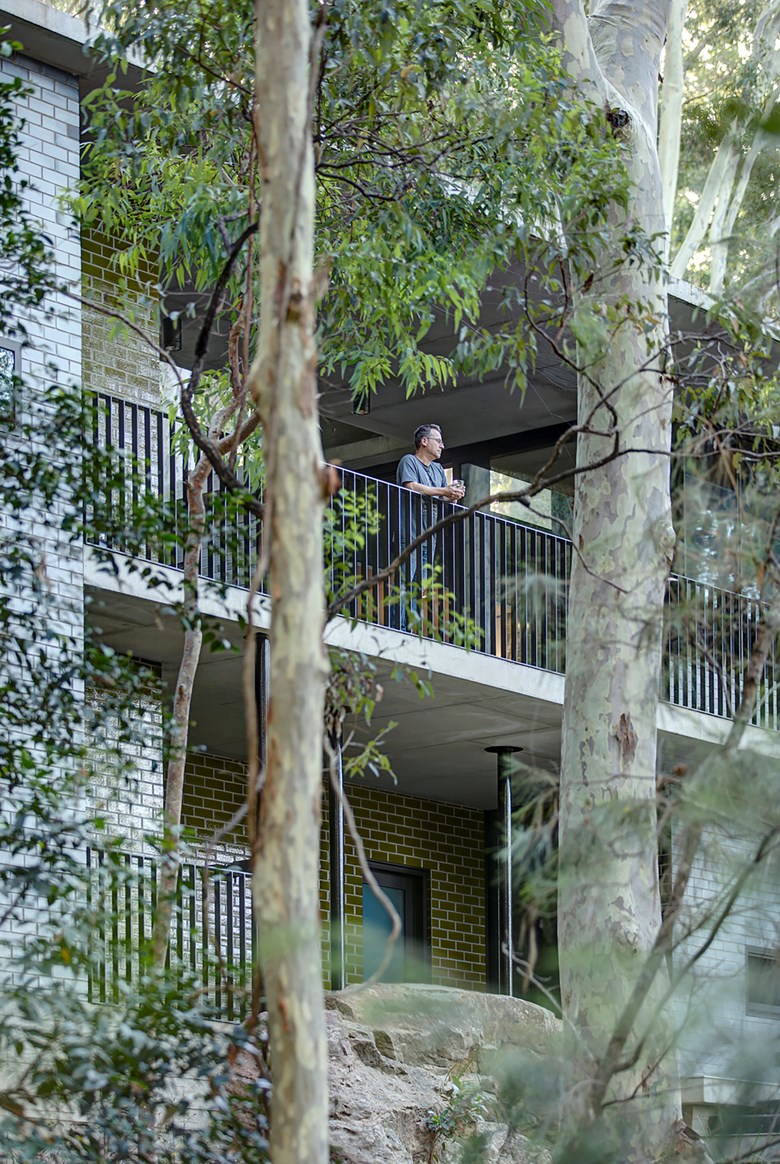 The house is designed for the extended family for weekends and holidays, and potentially for retirement. Ensuring step free access to the main living level of the house was key to designing a house that the owners could use well into the future.

Providing vehicle access to the house was ruled out as a driveway navigating the slope would have dominated the site and required removal of many trees. An inclinator provides a low impact step-free access from the carport to the upper level of the house, which is effectively a self-contained dwelling. The lower level provides space for visitors or extended family. 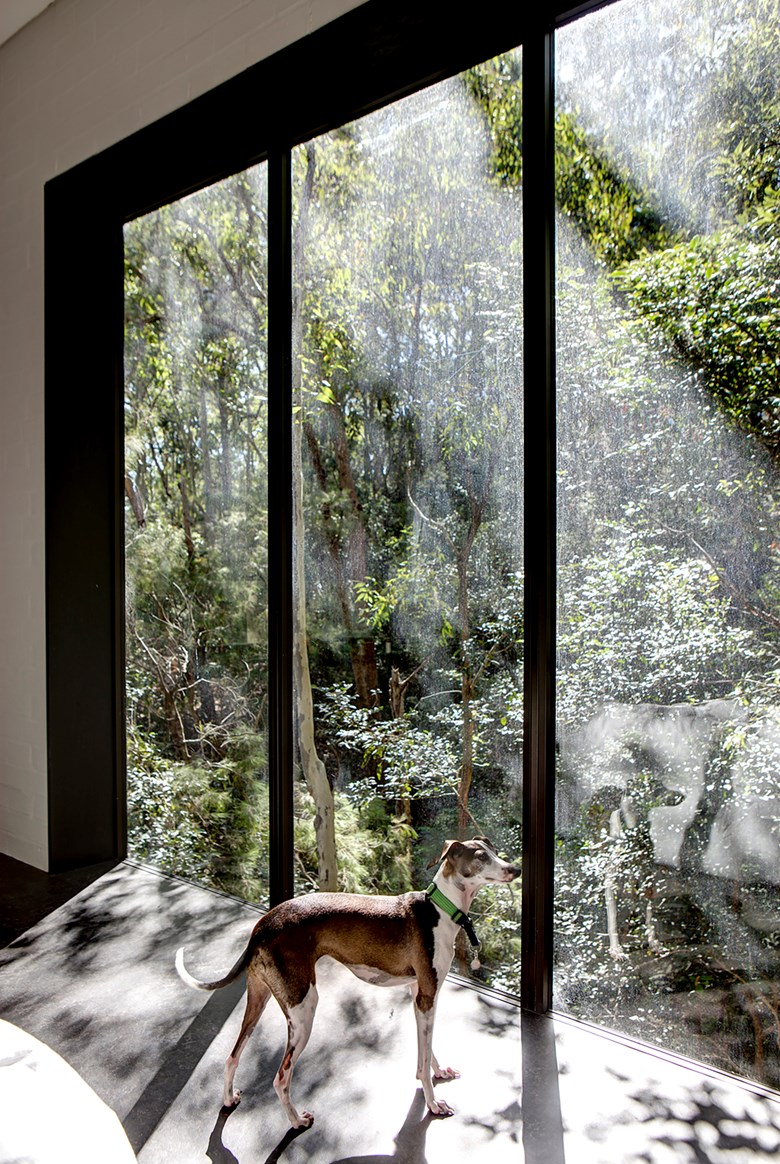 The house is really all about the beautiful site; the forest of mature spotted gums and iron barks, the sandstone outcrops and the fern filled riparian zone through the middle. Everywhere within the house is framed around looking out to the forest and the feeling of being within the trees. 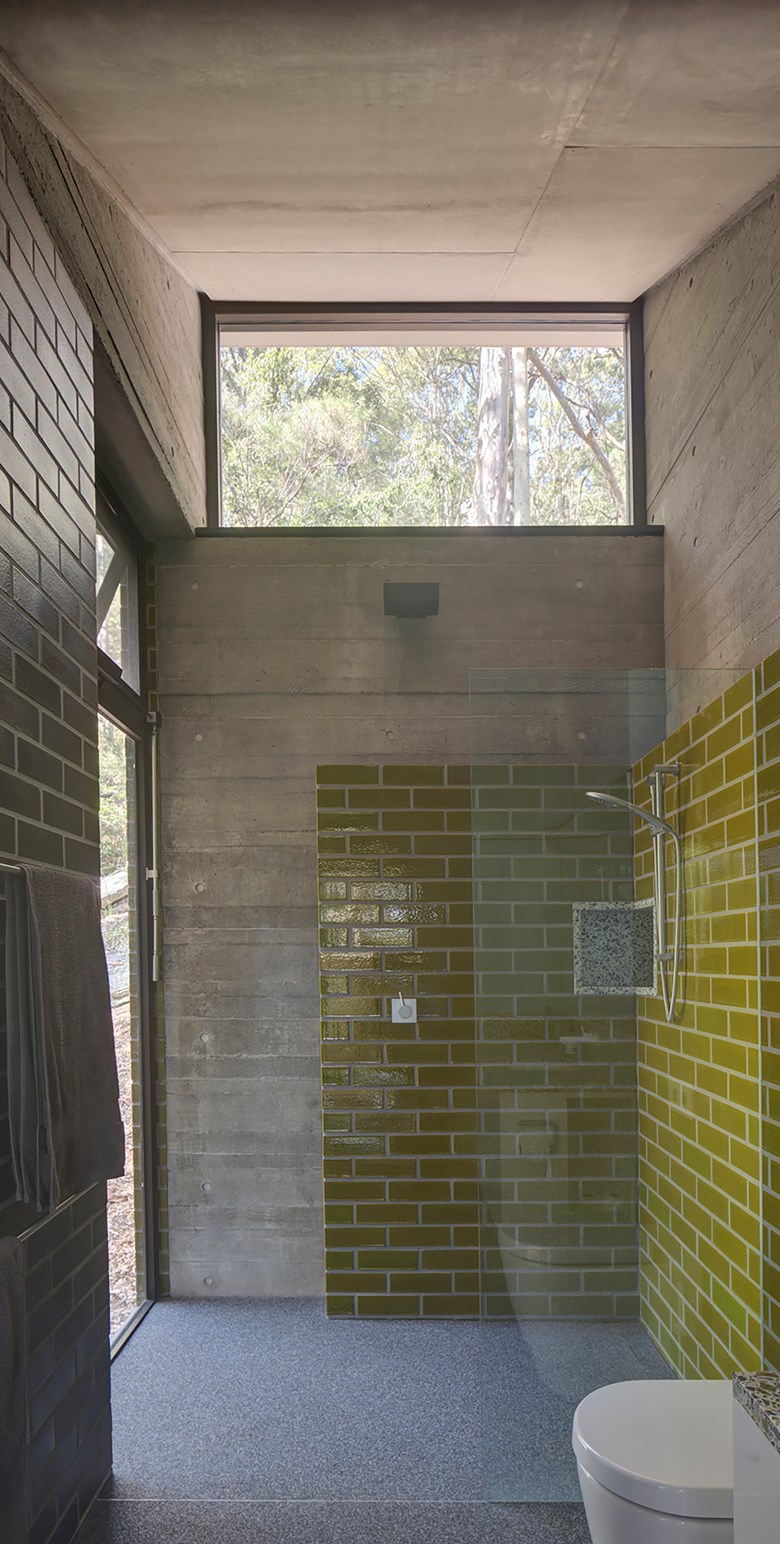 The natural landscape has been retained and, where cleared during the building works, supplemented with plants selected from the identified species within the ‘Spotted Gum Ecological Community’. There is no grass, no garden beds and the site is not irrigated, retaining its natural bush block character. 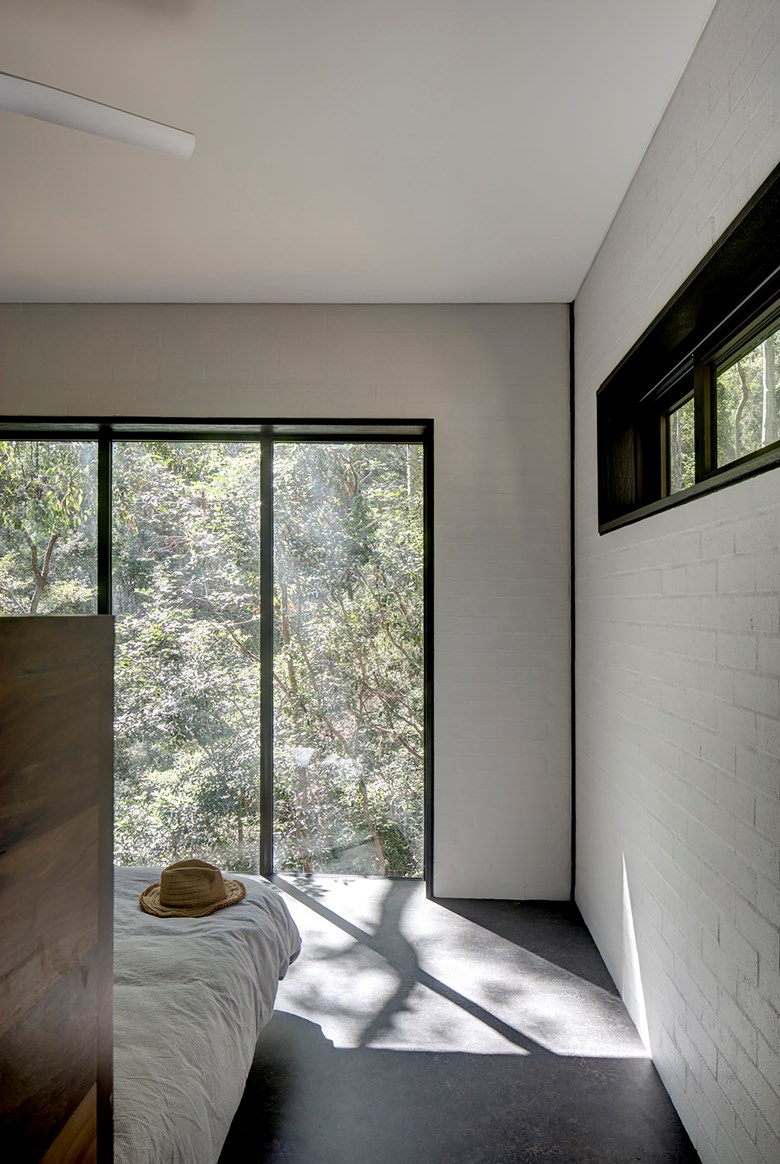 Visual impact on the landscape has been minimal. The silhouette of the horizontal concrete traces the outline of site contours and at the central breezeway frames a large view through the house to the landscape. Large sandstone outcrops are celebrated and integrated into the building – the house is anchored to and appears to grow out of the site. 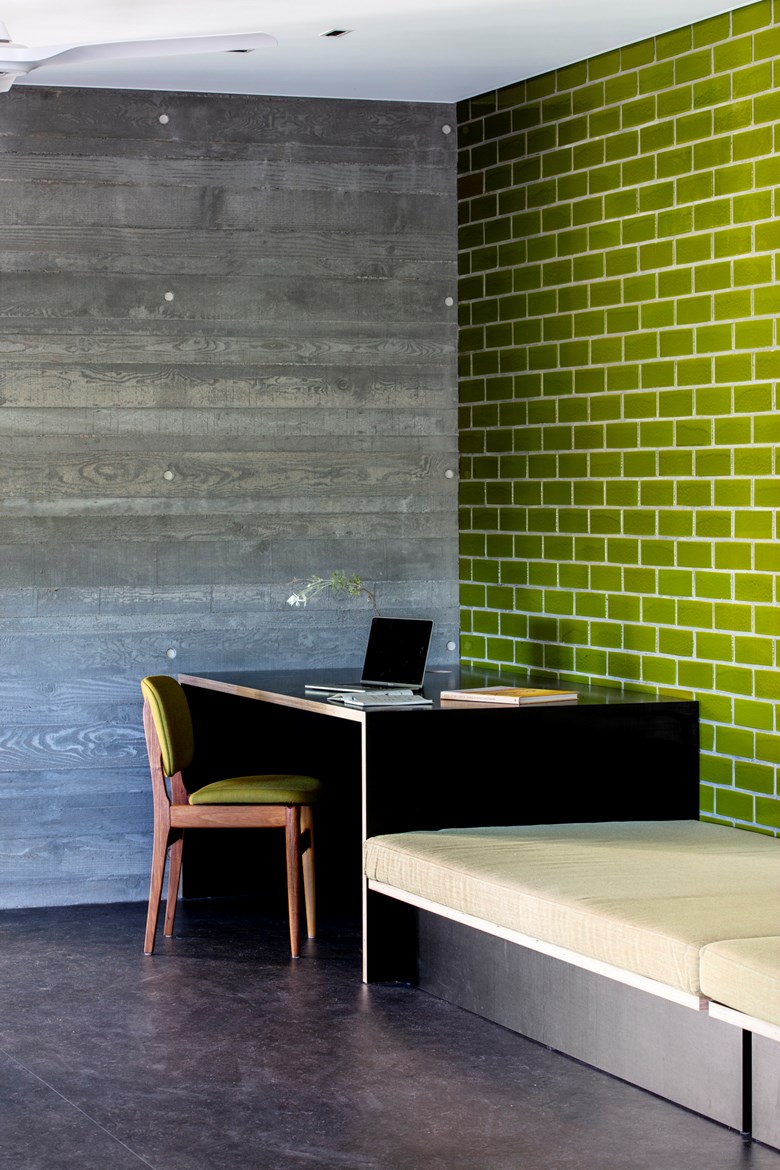 The success of this project was indeed a collaborative effort and a fine example of great heads coming together to achieve what others may deem impossible.