Returning to Norah Head is the Lighthouse Festival | Nov 13

A premium music, food and wine celebration, Lighthouse Festival brings together a collection of the best local producers and an enviable live music line up, all set against the picturesque coastline of Norah Head. 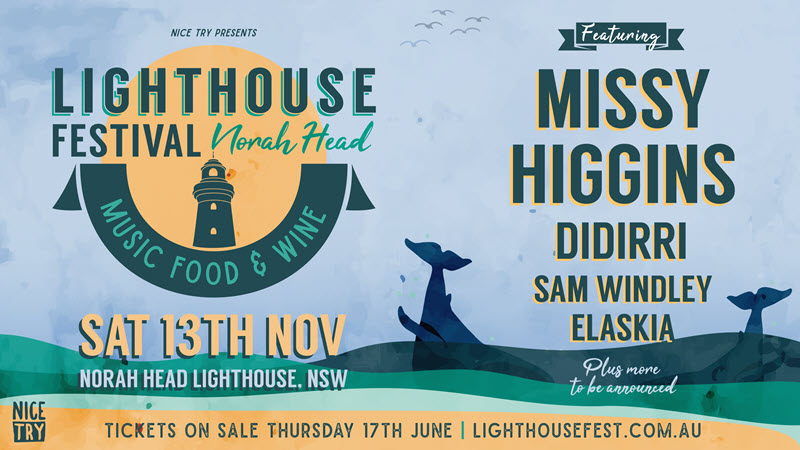 Known for her unforgettable live performances, Missy is a nine-time ARIA Award winner and will be closing out the festival with a collection of classic hits and newfound favourites.

With his honest approach to songwriting and magnetic charisma, Didirri is creating music that openly explores the vulnerabilities and lived experiences of the youth of today. His poetic lyricism has the ability to inspire and connect with his listeners, while also confronting the raw and often confronting side of life’s intricacies.

After being nominated as a Triple J Unearthed High finalist in 2020, Sam Windley's uniquely ironic patchwork of indie-rock and folk has seen her supporting the likes of Babe Rainbow, Budjerah and Ash Grunwald.

Fans of Lighthouse Festival can also expect a brand new food and wine experience featuring some amazing tastes from around the globe using fresh local produce complemented by some of our favourite boutique winemakers.

When: Saturday, 13 November
Where: Norah Head Lighthouse
Tickets:
Member's pre-sale tickets on sale Wednesday June 16 at 9am. Sign up for early access here.
General admission tickets on sale Thursday June 17 at 9am. To purchase click here.